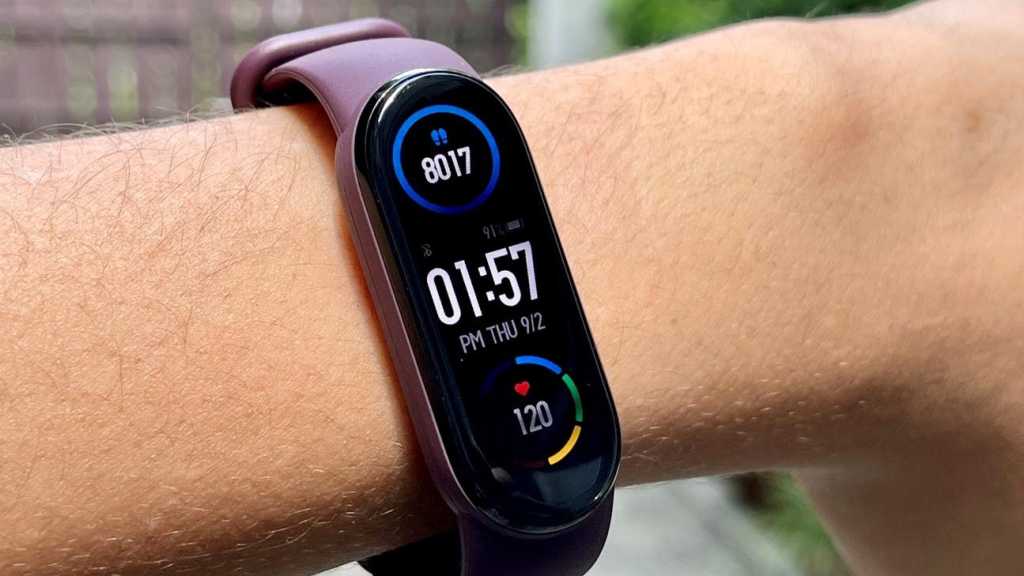 With the Mi Band 6, Xiaomi has improved on what was already the best value smart band out there. It’s a no-brainer for those on a tight budget or after a solid first-time wearable.

The activity tracker category may have risen to prominence through brands like Fitbit and Jawbone but the one name that’s discretely come to dominate in the space – not only in key markets like India, but globally – is Xiaomi.

Its Mi Bands have been around for the longest time, typified by a simplistic design language and easy-to-use functionality, sublime battery life and impulse purchase-worthy affordability. Xiaomi dominates this space and with the Mi Smart Band 6 ups the ante; borrowing more and more functionality from its smartwatches to help deliver an excellent experience on a budget.

Xiaomi sticks to its age-old playbook with the Band 6’s design. You get the main pill-shaped tracker, cupped in a TPU housing, while the strap itself offers a more wristwatch-like feel, complete with an easily adjustable loop.

There are no buttons on the tracker, as everything can be controlled via the vivid AMOLED touchscreen. This time around, Xiaomi also offers some more colourful band options making it a little more fashionable. 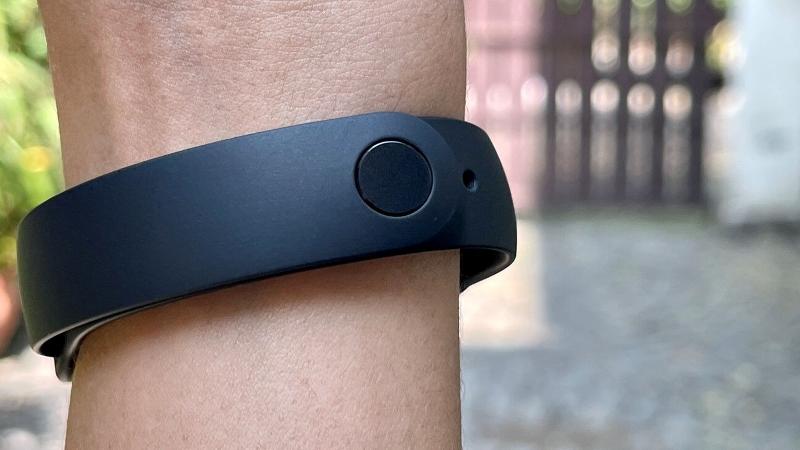 Fundamentally, it nails the ergonomics which are helped by its hyper-lightweight polycarbonate construction, clocking in at just 12.8 grams, which is only a touch heavier than the Mi Band 5 but lighter than the Realme Band. It’s not too thick at 12.7mm, stays flush against your wrist and doesn’t look overly ungainly, even if you have slender wrists.

The back of the tracking module is typified by an assortment of sensors that now include a heart rate monitor and an SpO2 monitor – something that could come in handy during COVID times, although I would advise using a dedicated monitor for more precise measurements.

It relies on a proprietary charger design, instead of a micro-USB or USB-C connector. The good news is that the magnetic latch system makes for painless and quick charging but you will need to make sure you don’t lose the charger. 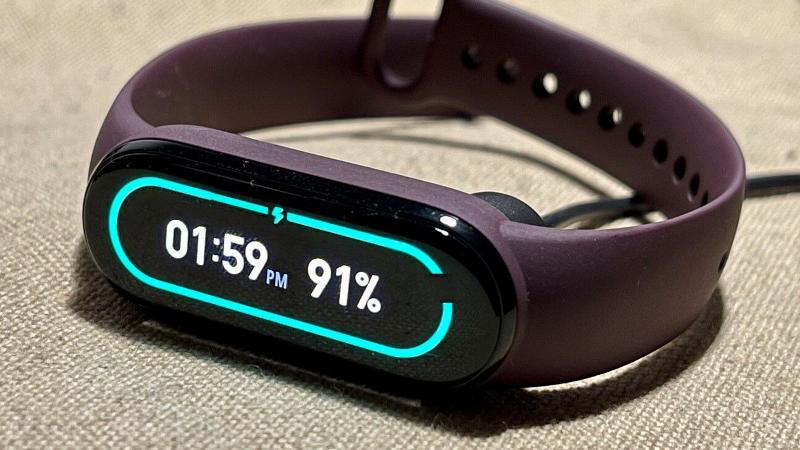 Build quality is superior to the likes of key rival the Realme Band, as well its own predecessors, but let’s be clear, this is no Fitbit Luxe – in terms of construction. It’s solid enough that everyday wear shouldn’t give you cause for concern and the included 5ATM water resistance means showering and swimming with it are both OK, as well.

The TPU material used on the straps, meanwhile, is a different story; showing potential for far faster wear and tear than the tracker itself (although they’re luckily inexpensive and come in a range of colours, making replacement easy enough).

One of the most impressive aspects of the Mi Band 6 is its screen. Its 1.56in AMOLED is bigger than most smart bands while offering good touch response and a pin-sharp resolution. It serves up 326 pixels per inch of sharpness – just as with the average iPhone’s Retina Display – while its 152×486 resolution and (up to) 450 nits of brightness ensure that everything looks crystal clear, even when viewed outside.

The fact that the tracker’s proportions are so similar to that of its predecessor while the display now fills the majority of that pill-shaped frontage (whereas the Band 5’s display appeared as a small rectangle in the centre) feels like a nice upgrade too.

The bezels aren’t the thickest (although they’re by no means the thinnest, either) and in day-to-day use they aren’t likely something that’ll detract from your enjoyment when swiping around on the Band 6. 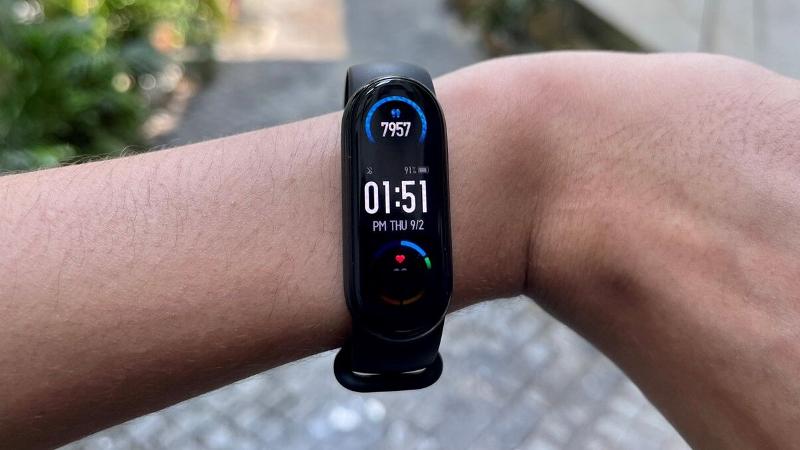 The screen is shielded behind tempered glass, for an added layer of protection. It even benefits from an anti-fingerprint coating, which works well in practice, as I seldom found the need to give it a buff.

Once enabled (as it’s turned off by default), the Band 6’s raise-to-wake feature worked well enough, albeit more sluggishly than I would have liked. One has to really move the Band, twisting the wrist and waiting half a second before the screen lights up. As such, it’s a wee bit slow for keeping track of time, even though this tracker does double as a timekeeping tool.

Xiaomi has basically created a more compact and affordable take on the Mi Watch Revolve Active, with the Mi Band 6. Sure, it doesn’t do everything the company’s smartwatches can but at the same time, it retains the same core functionality and still offers most of the things people care about, tied to the same Xiaomi Wear app (which works both on Android and iPhones). I tested this band using an iPhone as my primary device. 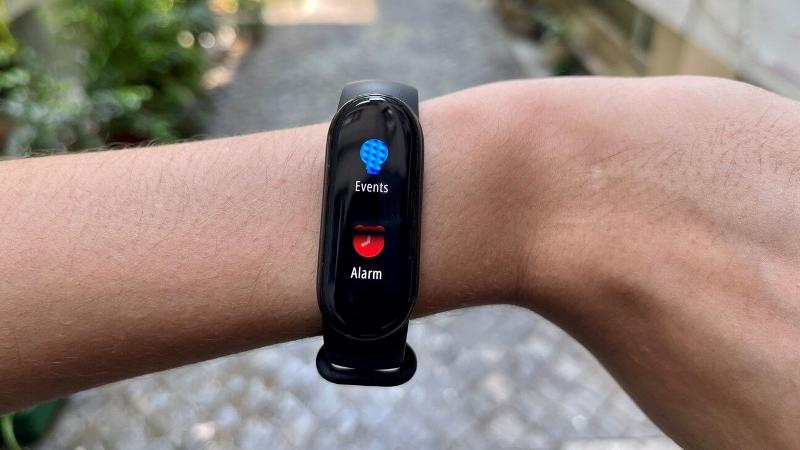 Pairing the device was pretty painless, though it will need an assortment of special permissions that you will need to invoke manually (you’re guided through this process during setup).

It runs mostly in the background and synchronises sporadically but there will be times that you will notice that it hasn’t updated on your phone. Synching inconsistency is perhaps its biggest weakness of the Band 6 experience but in terms of ability, there’s actually quite a lot it can do.

The band also doubles as a tool for keeping time and you get a couple of watch faces that feature complications, relaying additional information like the weather, your heart rate and your PAI (personal activity intelligence) score. Notifications also sync up with your smartphone and in the case of the iPhone will display the likes of WhatsApp messages, alert you to phone calls and other stuff, like emails too. You can even control music from the band itself when using services like Apple Music, at least in terms of basic functions, like play and pause.

Note (15/9/21): Since this review was first published, Xiaomi has also released an NFC variant of the Band 6 to global audiences (this was previously only available in China, tied to AliPay), which supports NFC payments via Mastercard and the Alexa voice assistant, for added functionality.

Largely, the Mi Band 6 performs as advertised, which is highly impressive considering its price. It’s also is pretty responsive and smooth to use, with regards to navigating the user experience. Xiaomi has limited flourishes like animations throughout the UI to ensure that performance doesn’t get bogged down, however, it feels like a less premium product as a result.

There’s automatic workout detection, which in testing managed to consistently detect when I was playing table tennis; something that even the Apple Watch Series 6 wasn’t able to pick up on. As a lifelong table tennis player, I found this feature to be fun and useful, although I already had faith in it working, based on a similar experience when wearing the company’s Mi Watch Revolve Active. 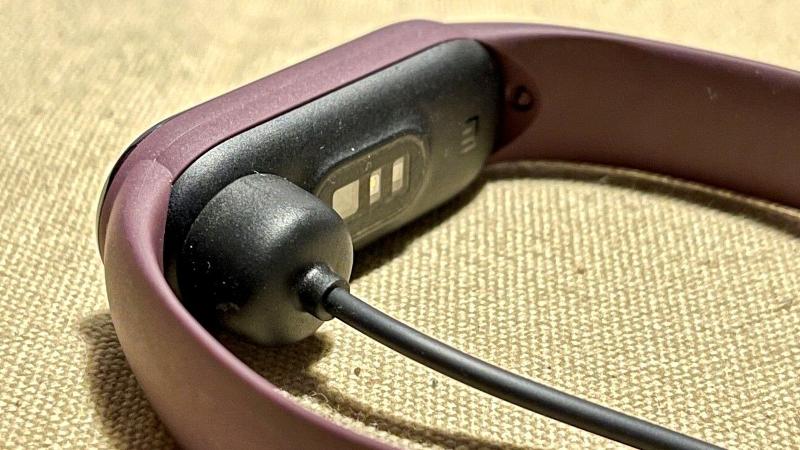 That wasn’t true of all supported activities though, with spotty reliability when testing it with other activities, which fits with the Band’s more affordable nature. The accuracy of some of the metrics didn’t appear to match that of pricier smartwatches including Apple’s and Xiaomi’s latest offerings, but I did notice that it served up significantly better results than previous iterations of the Mi Band.

Xiaomi claims 14 days of total battery life and after dropping by 35 percent after four days of wear, while ambitious, that time frame doesn’t seem out of the question (I’ll update this review with more exhaustive figures after a longer period of wear/use). That rate of drain was also with heart rate, SpO2 monitoring and sleep tracking enabled too.

The Mi Band 6 comes with a 125mAh battery, charging to 50 percent in 39 minutes, in testing, while a full charge took 102 minutes.

Considering this tracker’s budget price tag, it’s fair to assume that traits like sensor accuracy won’t compare to wearables that cost more than ten times as much, however, in practice, the Mi Band 6 proved to competently track metrics to within what I’d consider an acceptable margin, compared to the likes of the latest Apple Watch.

As mentioned earlier, in the case of table tennis and sleep tracking it did an impressive job. Even the heart rate and SpO2 monitors reported figures similar to the Mi Watch Revolve Active. Of course, like most wearables, the Mi Band 6’s data shouldn’t be used for any medical purposes, they’re more gimmicks and helpful data points for personal fitness goals, more than anything else. 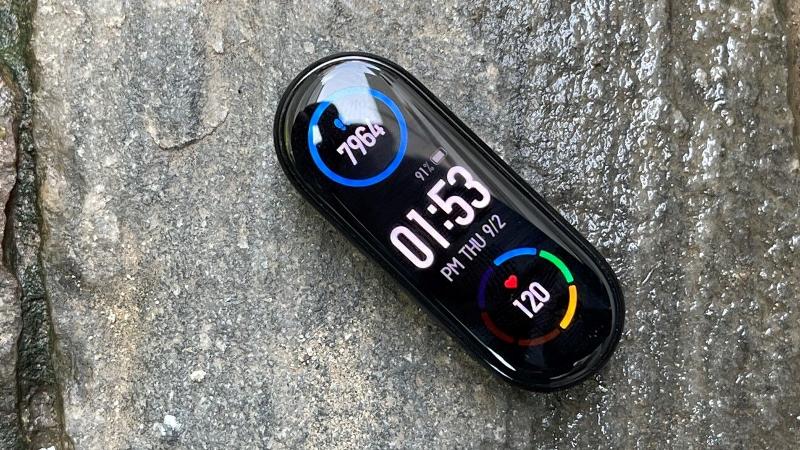 The depth of the sleep data recorded is quite impressive, rating your sleep using a point system. Everything is broken down into various buckets of sleep distribution: deep, REM, normal, light and awake. It even spits out a breathing rating, which is cool, even if it’s tricky to really gauge such a metric’s accuracy.

Again, there’s no bigger bugbear than the Band 6’s inconsistency when it comes to automatic synchronisation with the Xiaomi Wear app. Luckily, you can kick this process off manually from within the app if you need to.

The Mi Band 6 is available across Europe and India for £39.99/€44.99/₹3,999/US$42.30. This is more than what you would pay for the OnePlus Band or the Realme Band and on-par with the Oppo Band, however, the Mi Band 6 nails the user experience unlike any other smart wearable in its segment. 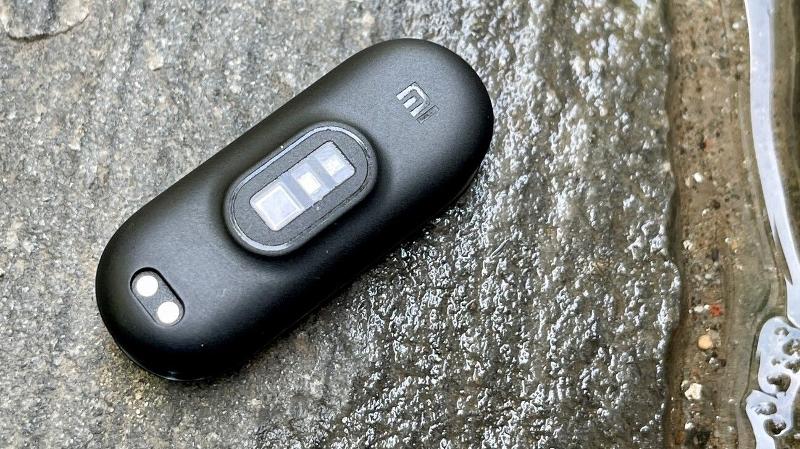 The NFC-capable version of the Mi Band 6 launched outside of China on 15 September and costs €54.99.

There is a reason why the Mi Band line is one of the best-selling trackers out there. It is without a doubt a cut above similarly priced competitors.

It actually comes shockingly close to the mighty Apple Watch in certain aspects and more or less retains the functional and pleasant user experiences that the Mi Watch Revolve Active brings to the table.

At the same time, this is a lightweight, easy-to-wear wearable whose discreet and diminutive nature, means you only really notice it’s there when you need it. It is the ultimate entry-level tracker for kids and adults alike.

Just keep in mind it hasn’t been designed for professional use nor has it been designed for active medical tracking. Regardless, Xiaomi made the right calls when developing the Mi Band 6 and as such, the best budget smart band has just gotten even better.