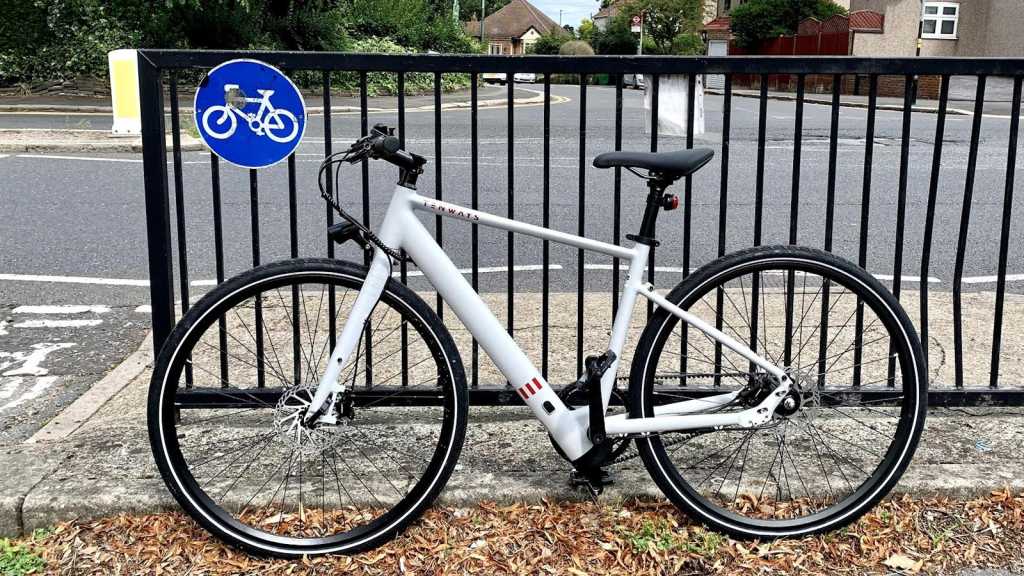 The Tenways C-Go 600 is a well-spec’d single-speed electric bike that offers a great-value alternative to some of the big names such as Cowboy.

Ordinarily, I wouldn’t write about a product before it’s available to buy. In fact, I have a standard response I copy and paste to the multitude of enquiries asking for coverage of Indiegogo and Kickstarter campaigns.

It was the same response I sent to Tenways, but when I found out that bikes were sitting in boxes ready to ship and that the specs looked seriously good for the price, I agreed to try one out. The Indiegogo page is really there to advertise the bike, not raise money to develop and build it.

This may be a new brand yet to get established, but it appears to have a winner on its hands already. The C-Go 600 is a single-speed commuter’s bike that, at a glance, few people would realise is an electric bike. The battery is hidden in the frame and only a couple of subtle extra cables for the motor and display.

I’ve reviewed plenty of budget electric bikes and it’s always easy to see where costs have been kept down with low-quality components.

The C-GO 600 isn’t really a budget ebike, though. It costs a fair bit less than a Cowboy or VanMoof but – unless you grab one at the Indiegogo Early Bird discounted prices – it’s what I’d call a mid-ranger.

Yet it still offers impressive value for money thanks to some high-quality branded components. It’s also nice and light, as far as ebikes go. On my scales it was a fraction under 16kg.

The C-GO 600 is most similar to the Cowboy 3 because of its single-speed belt drive. It’s a Gates Carbon Drive CDX system with a 60-tooth chainring and 22-tooth rear sprocket. 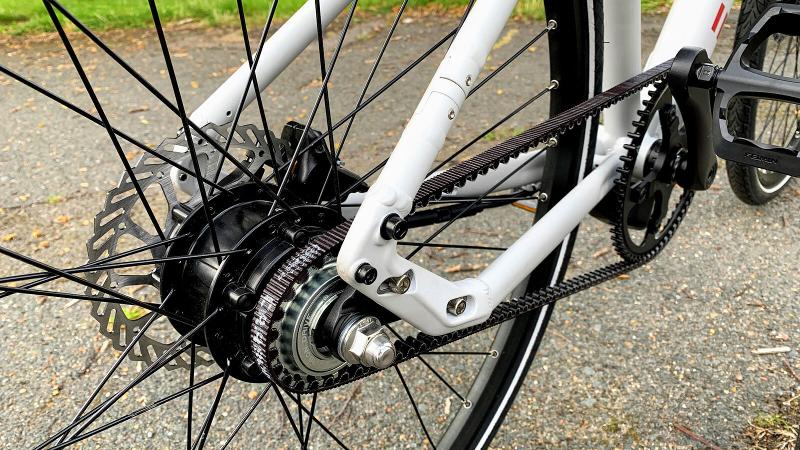 And instead of a cadence sensor, which simply detects if the rider is pedalling or not, Tenways uses a torque sensor for smoother power delivery.

The aluminium frame looks much like a regular bike and is even more attractive in some of the two-tone colourways Tenways offers and not the Light Grey I was sent, which looks a lot like grey primer because of the matt finish, which also happens to pick up marks and dirt easily.

Look closely at the rear and you’ll notice that the rear axle sits in adjustable dropouts. This is the best way to handle belt-driven bikes because you can easily remove the rear wheel (to change a puncture, say) without having to re-tension the belt when refitting the wheel. 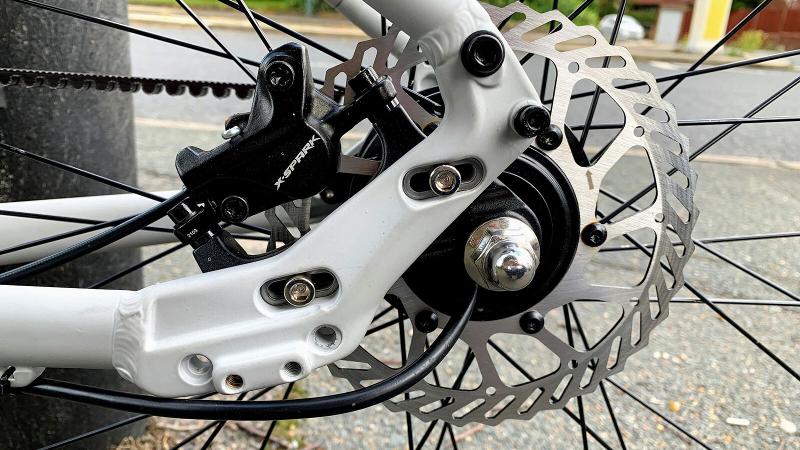 Tension is set using Allen bolts which allow the dropouts to slide horizontally, and there’s a removable piece in the seatstay so you can remove and replace the belt (which should last 30,000km – effectively the lifetime of the bike).

The rear wheel is attached with 18mm nuts and it’s irksome that an 18mm spanner isn’t included in the toolkit. That’s really designed for you to assemble the bike only, not maintain it, and includes a couple of Allen keys and three smaller spanners.

The other oddity is that the left-hand brake lever controls the front brake and the right-hand the read wheel. It’s the first bike I’ve ridden that doesn’t use the conventional setup, but as long as you use both brakes together, it’s no big deal. 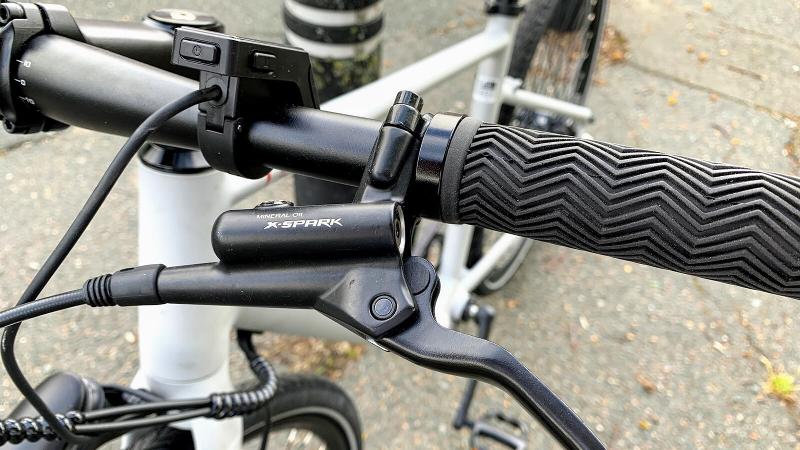 If there’s a real disadvantage, it’s that the battery can’t be removed and that could be problematic if you don’t have a power socket where you store your bike.

I like the compact OLED display which is easy to read, even in bright light. Like the motor, it’s IP65 water resistant, and before the bike will give you any assistance you have to enter a four-digit passcode. This isn’t really an anti-theft device: you could still ride off with it unassisted. 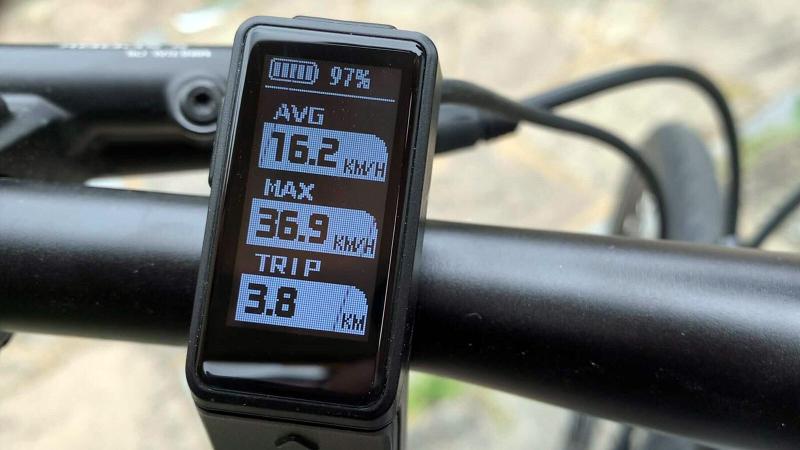 The display acts like a traditional bike computer with speed and odometer, but there are additional pages which show average and maximum speed, trip distance and even an estimate of remaining range. Battery level is reported as a percentage, which is far better than a graphic and you can easily see at the bottom of the main screen which power assistance mode you’ve set.

As far as accessories go, a USB-rechargeable LED rear light is included in the box, and the front light runs off the main battery. Front and rear mudguards are included, but no kickstand. I removed the guards for these photos as the bike looks a lot better without them. 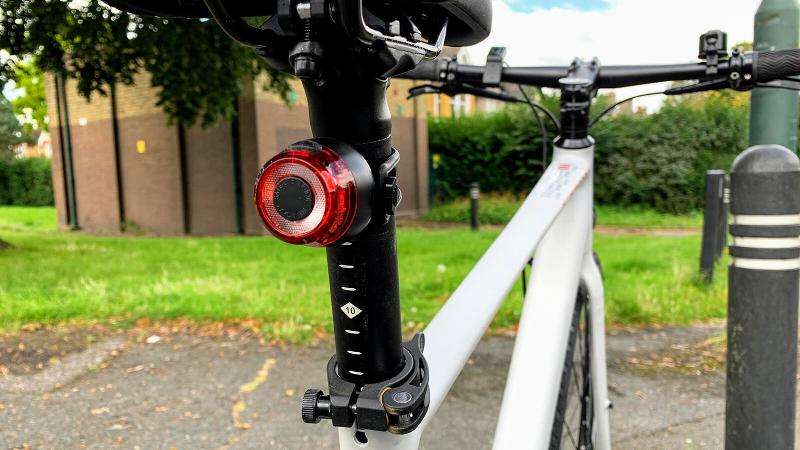 Tenways says it will release an app, but that wasn’t available at the time of writing. This will replicate much of what the display shows, and offer historical data on rides. It’s certainly not needed to ride or operate the bike, and that’s a bonus in my view.

As I said in my Cowboy review (and others) a single-speed setup isn’t for everyone. It’s great for urban commutes but you do need to help the C-GO 600 get up to speed.

Fortunately, the torque sensor is set up perfectly, making you feel bionic when you pedal. It responds quickly, so press hard on the pedals to get going and the motor will deliver its power and get you up to cruising speed very quickly.

The torque sensor is the throttle, so there’s no handlebar-mounted throttle or any boost button. The C-GO 600, then, isn’t for lazy riders: this is no electric moped. It’s a proper rider’s bike and it really feels great to ride.

Hydraulic disc brakes usually have a significant bite, but initially, those on the Tenways felt barely adequate. However, a few miles down the road, the pads bedded in – there was likely some surface glaze or lubricant on the rotors from the factory – and they improved markedly.

Because the torque sensor requires the rider to put effort in to get power out, range is very good. Tenways claims 70-130km, with the larger distance based on using the minimum assistance level.

Thanks to the motor’s clutch, there’s really no resistance when riding without any assistance and the motor itself is one of the quietest I’ve heard.

When you’re walking along pushing the bike, you can use the 6km/h assist mode by pushing and holding the down button.

Charging takes around three hours from completely empty, and the socket is on the side of the down-tube. 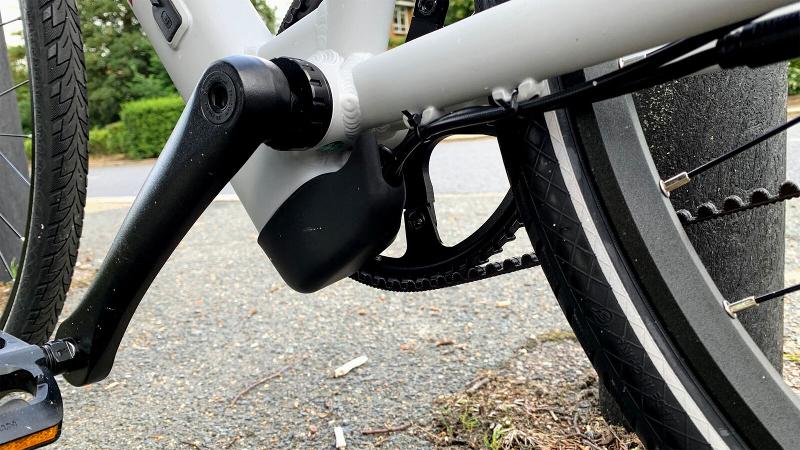 At the time of writing, the bike isn’t yet available to buy. It will be sold from Tenways’ website from the end of September but if you want to get one of the first deliveries, starting September 2021, the only option is to use Indiegogo.

As ever, be warned that this is not a retail site like Amazon. The ‘early bird’ prices are for investors willing to back the campaign. In this case, it’s already well over the goal, but it is not the same as ordering an in-stock product from a retailer.

Even at the higher price, the C-Go 600 is still very good value. At the early bird price, it’s ridiculously good.

For alternatives, check out our recommendations of the  best electric bikes to buy.

The Tenways C-G0 600 is a cheaper alternative to the Cowboy 3 single-speed bike, and only really lacks the built-in GPS and Bluetooth for tracking and over-the-air updates. It’s also worth considering support: there’s a five-year warranty on the frame and two years on other components, but you’re unlikely to find any local repair centres so may well have to fit any replacement parts yourself.

Tech support is an unknown quantity at this point in time, though the company has started posting videos on its YouTube channel.