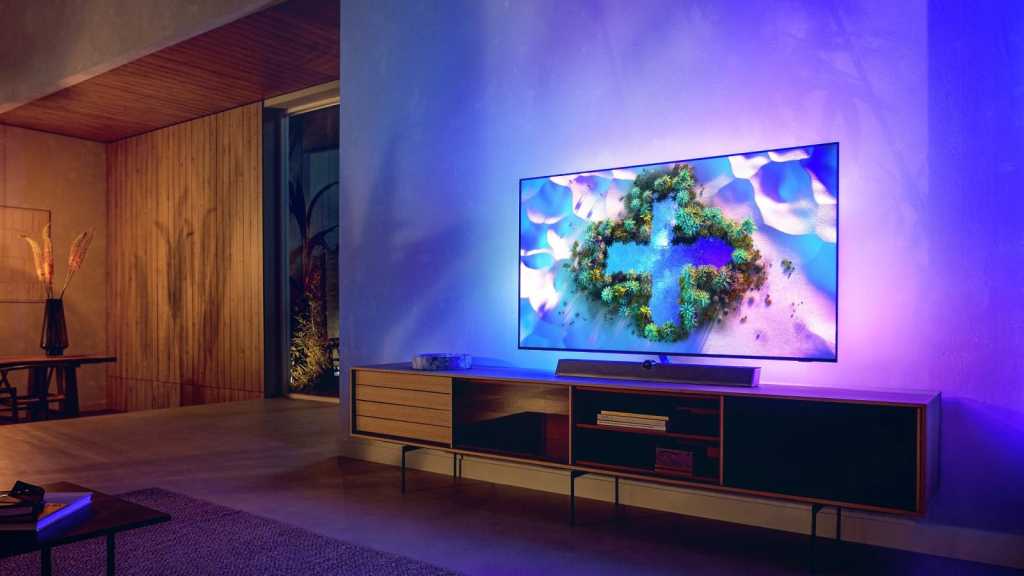 Whether you’re into high performance home cinema or next-gen gaming, it looks like this new Philips 4K flagship has your back.

The OLED+936 is a beautifully built OLED. A premium steel frame holds the wafer thin panel in place, and there’s barely any depth penalty for the inclusion of four-sided Ambilight.

Our review sample is the 65in model, a hefty giant that tips the scales at 21kg but it’s worth noting that the TV is also available from 48in which is unusual for an OLED TV.

The soundbar system is an integral part of the pedestal stand. It’s tethered by a captive audio cable that’s kept from view via some deft cable management.

The set comes with a choice of Freeview Play and satellite tuners.  There’s also a subwoofer pre-out, optical digital audio output and a CI card slot.

The OLED+936 runs Android 10. While this doesn’t feel particularly different from previous Android TV generations, it runs smooth and fast, no doubt helped by 3GB of DRAM and 16GB of flash memory.

There’s a healthy selection of streaming apps on board, including Netflix, Prime Video and Disney+, while catch-up TV is covered by Freeview Play (including BBC iPlayer, ITV Hub, All4, My5, UKTV Play).

Less obvious, but no less essential, is the OLED936’s advanced anti-screen burn technology. Philips has worked hard to perfect this. The system monitors the picture for static visual elements (logos and scores, for example) and then dims them to make screen burn virtually impossible.

I measured input lag at 21.6ms in Game mode (1080/60). Given the provision of a high-spec HDMI board I might have hoped for better, but apparently, its latency performance is affected by the set’s P5 Dual engine configuration.

The OLED+936 walks a fine line between wow and woe, pushing the envelope when it comes to image processing and motion interpolation, but rarely overstepping the mark.

Philips is unabashed when it comes to colour, texture and detail processing – and I love it. Its latest P5 processor, here running that aforementioned AI Intelligent Dual Picture Engine, manages to squeeze subjective detail out of images that rivals fail to find.

A new feature on this set is the ability to measure and react to ambient room light, using Ambient Intelligence. As a consequence, there’s no Dolby Vision IQ support. Philips says it doesn’t need DV IQ because it does the same job better. It’s certainly comparable, maintaining detail in near black even when room lighting is borderline bright.

The set also supports HDR10+ Adaptive, which combines dynamic metadata adjustment with the same ambient light measurement. The format is a bit more limited when it comes to real-world applications, but at least it’s available.

Before you ask, yes, the OLED936 does use the latest LG Display panel technology, promoted as Evo by LG in its own G1 OLED (2021) model, which gives a significant image lift. If you might fancy Mini-LED technology then read our Samsung QN95A review.

I measured peak HDR brightness at just under 950 nits, using a 10 per cent measurement window. This is comparable to the performance of the new Panasonic JZ2000, and even though it uses the same panel technology, is rather higher than the LG G1.

However, note that the 48in model does not use the same panel (LG Display does not manufacture one in this size) so you won’t be getting quite the same experience.

Philips has also upgraded image interpolation on this set, which is good news when it comes to sports coverage (I’m looking at you F1). Fast Motion Clarity helps retain detail, courtesy of 120Hz Black Frame insertion, but I suggest you keep it on its lowest setting, where the original peak light output of the OLED panel is undimmed. Opt for more stringent processing and you’ll see an incremental loss of brightness.

Sonically, this set is one of the best you can buy on the market. That improved Bowers and Wilkins audio system is a knockout. A 3.1.2 configuration, it’s genuinely muscular, making short work of blockbuster movies.

In addition to improvements made to the crossover components, voice coils, and driver cones, there’s been an upgrade to the Dolby Multi-stream decoder used. All of which seems to pay dividends.

The speaker array projects wide and high, and is able to engulf you with clear sound steerage in the virtual plane. Power output is rated at a punchy 70W.

There are no equivalent models for the US market, as brand owner TP Vision doesn’t have the rights to that particular marketplace.

Prices are fairly premium but cheaper than the LG G1 and you’re getting the latest OLED tech here. Plus you needn’t factor in buying a separate soundbar so value for money is stronger than many flagship TVs.

Still not sure? Check our chart of the best TVs.

Picture quality is outstanding, thanks to the most ambitious P5 image processing engine yet, and that new high brightness LG next-gen panel (although not on the 48in model), while its HDR performance is top-notch, with enviable HDR format support. If only its rivals were as accommodating.

Build and design are first-rate, and the Bowers & Wilkins sound system is tremendously impressive. If you’re looking for an all-in-one that gets everything just about right in a stylish package, then this Philips demands your attention.

It’s a strong contender for TV of the year.