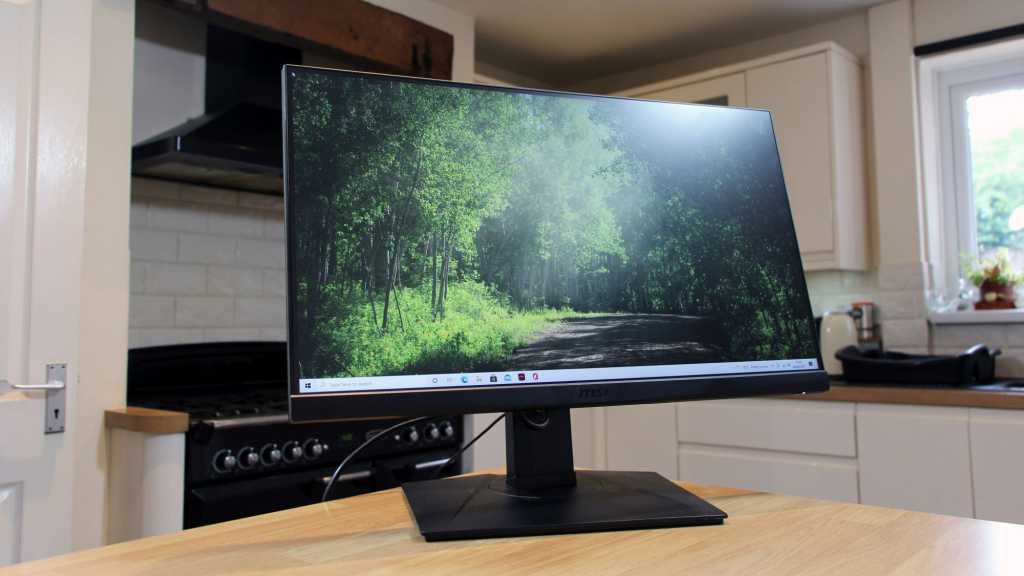 The MSI Oculux NXG253R is a sensational high-speed option for top-tier eSports players – the best monitor you can buy right now. If it’s not too expensive or simply overkill for your usage.

The MSI Oculux NXG253R is designed exclusively for eSports. This stunning display has a monster 360Hz refresh rate and Nvidia G-Sync, so it should be able to render the fastest games with smooth, crisp motion and no screen-tearing.

That kind of motion perfection can help players gain an advantage in frantic competitive titles, but this hardware isn’t cheap – in the UK you’ll have to pay £599, and in the US it’ll set you back $599.

The MSI isn’t the only 360Hz eSports panel on the market. The Asus ROG Swift PG259QNR was the first speedy screen on the scene, and it’s the MSI’s main competition.

When seen from the front, the Oculux NXG253R doesn’t have the outlandish design of the Asus, but that’s not necessarily a problem. It looks smart and subdued, and its large, plain base is sturdy with plenty of space for peripheral storage.

The rest of the display exhibits rock-solid build quality, which is reassuring for frequent movement and you’ll only find gaming design touches at the rear. There’s a large Nvidia G-Sync 360 logo and a small band of RGB LED lighting.

The generous 130mm of height adjustment is joined by smooth, easy movement in every other direction, and the MSI supports 100mm VESA mounting, too. It’s a little more generous here than the Asus, although that panel did fight back by including a desk-mounting kit.

The Oculux has three USB ports on the left-hand side of the display – one more port than the Asus, and in a position that’s easier to access. The NXG253R has a headphone jack, but no speakers or USB-C port.

The 360Hz refresh rate is the best you’ll find on any gaming monitor right now and allows the fastest eSports titles to run with near-perfect speed and clarity.

There’s Nvidia G-Sync, which synchronises the display’s output with the frames produced by the graphics card of your gaming laptop or PC. That eliminates tears and stutters, which means no distractions during gameplay. You also get the Nvidia Reflex Latency Analyzer, which can identify and eliminate signal delays between the display and your PC and peripherals.

Nvidia G-Sync usually works with Nvidia and AMD graphics cards, but right now the MSI only works smoothly on Nvidia cards. That’s not a dealbreaker because Nvidia is dominant in PC graphics, but the Asus did work with Radeon GPUs.

Unsurprisingly, the rest of the display is designed for competition. It’s an IPS panel with a super fast 1ms response time and 10-bit colour, just like the Asus. And, just like its rival, the MSI has a 24.5in diagonal with a Full HD (1920 x 1080) resolution. Those figures make sense for competition: the modest physical size means gamers don’t have to move to see the whole panel, and the resolution is high enough for gaming at 360Hz without needing a ridiculous GPU.

Still, make sure you’ve got something like an Nvidia GeForce RTX 3070 or 3080 alongside a decent processor and quick memory.

The MSI uses Nvidia’s Ultra Low Motion Blur (ULMB) technology, just like the Asus, but it’s not worth bothering with on 360Hz displays: motion is crisp enough at that speed and ULMB doesn’t work beyond 240Hz – or with G-Sync.

MSI’s panel has two HDMI ports and one DisplayPort connection, but the latter is best – it’s the only one that supports 360Hz operation. The HDMI ports are restricted to 240Hz.

The MSI and Asus are extremely similar – and, on paper, they’re both great for eSports. But if you want a display for single-player gaming, then we recommend the Samsung Odyssey G7, which is a curved panel with a higher resolution and larger physical size alongside a 240Hz refresh rate.

The combination of a 360Hz refresh rate and Nvidia G-Sync delivers sensational performance in fast-paced games: the MSI is butter-smooth and crisp in every situation. As ever, though, the 360Hz refresh rate will only benefit demanding players – 240Hz displays will sate casual gamers.

The 360Hz refresh rate is paired with a 1ms response time. Happily, this is achieved in the display’s Fast response time mode, which serves up smooth, fast and crisp performance with only a tiny bit of overshoot that’s only visible if you look closely.

The MSI is marginally better than the Asus here – that panel only achieved its 1ms response time in its Extreme mode and there was too much overshoot, and it ran at around 2ms in its more accommodating modes. Both displays are easily good enough for top-level eSports but the MSI has a tiny advantage if you want to split hairs.

Underneath the butter-smooth operation, you’ve got a middling IPS display. Out of the box, the MSI Oculux NXG253R delivers a superb Delta E of 0.69 alongside a colour temperature figure of 6,426K, which means colours are accurate.

It displays 92.3% of the sRGB gamut, which means it’ll render almost every shade needed by games. Viewing angles and uniformity are excellent, and the MSI maintained these figures when I increased the backlight to its peak level of 472 nits.

The brightness level of 213 nits is reasonable, but the black point of 0.24 nits is too high, and it creates a contrast ratio of 888:1. That’s low, and it does mean that the MSI lacks a little bit of depth – it’s bright and breezy but lacks intensity.

This isn’t the display to buy if you want HDR, either. It only adheres to VESA DisplayHDR 400, and it doesn’t have any special dimming. Factor in the underwhelming black point and the mediocre DCI-P3 coverage level of 65.9% and you’ve got a panel that doesn’t deliver a significant improvement here.

The Asus was just as poor in HDR situations, but better than the MSI when it comes to image quality: it has a higher contrast ratio and a better sRGB gamut coverage. The Samsung Odyssey G7 is better than both here, though – it has superior contrast and colour ability alongside its higher resolution.

The Samsung Odyssey G7 is more suited to mainstream eSports and single-player gameplay. It’s available in two sizes, and prices are competitive: the 27in version currently costs £549 and US$699, while the 32in variant is available for £569 and US$749.

Still not sure? Check out our chart of the best gaming monitors.

The MSI Oculux NXG253R is a fantastic display for competitive gamers. The 360Hz refresh rate, Nvidia G-Sync smoothness and 1ms response time deliver world-class gameplay: it’s crisp, tear-free and fast, and in real-world use it’s a tiny bit quicker than the Asus thanks to its marginally better response time.

Elsewhere, the MSI has great build quality and loads of adjustment, so it’s ideal for practical players.

It’s not perfect. The MSI has accurate colours, but the Asus has better overall image quality thanks to its superior contrast and gamut handling. The Samsung is better for all-round mainstream gaming, too.

As usual, 360Hz displays are only really suited to the most demanding competitive gamers. But if that’s you, then the MSI squeaks ahead of its main rival in terms of speed, and so it’s our eSports display of choice.