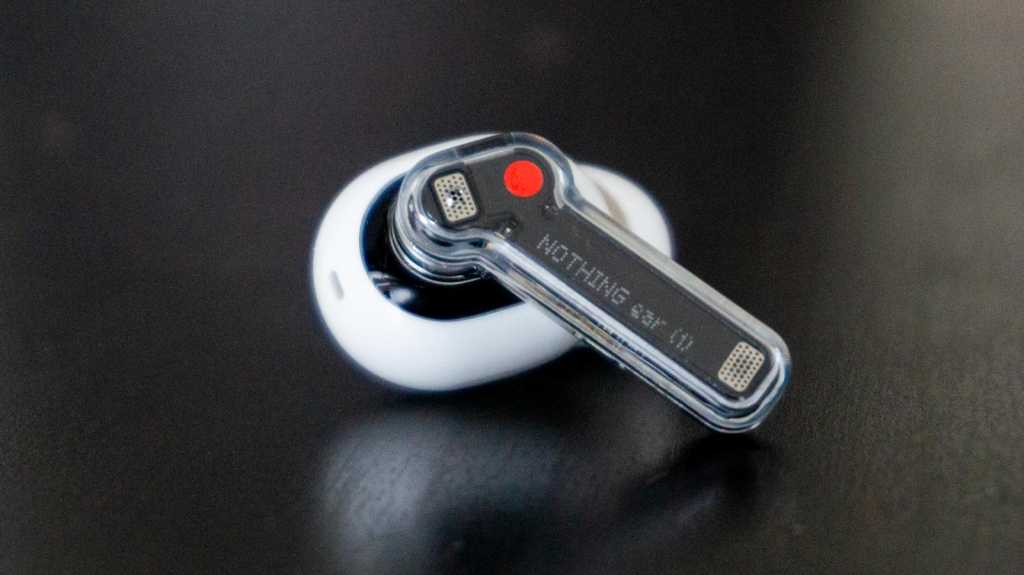 On paper, the Ear (1) outpace almost all the competition at the price point simply by virtue of including premium features like ANC and wireless charging. In practice, the good-but-not-great audio quality and battery life hold these back a little, as do a few bugs and a divisive design – but there are still few rival buds that offer this much for this little.

There aren’t many pairs of headphones that could generate as much pre-launch hype as the Nothing Ear (1) managed – and certainly no others from fresh-faced start-ups launching their first ever product.

But the excitement here is about more than Nothing. For one thing, there’s the fact that some of the design and audio engineering has actually come from Sweden’s Teenage Engineering – veterans of the music tech industry.

More than that though, fans have been excited to see what’s next for Nothing founder Carl Pei, launching his first venture since departing phone company OnePlus last year.

Taken as headphones in their own right, the Ear (1) earbuds represent excellent value for money, with a strong feature set including ANC and wireless charging, and a striking (but no doubt divisive) design.

As a sign of things to come from Nothing, they’re a little less clear than you might have thought, with elements of the design and the practicalities of the hardware frequently working against the company’s pitch to have tech recede into nothingness.

So no, Nothing hasn’t nailed its vision with its first product – but it was never likely to. What it has done is put out some great headphones first time around – with a few flaws, to be sure, but nothing that should stop you from considering picking up a pair.

In one sense, Nothing has played it safe and followed industry trends with the design of the Ear (1) – while in another, it’s bucked those trends entirely.

In broad strokes, these look a lot like many other pairs of true wireless earbuds. The shape of the buds will be immediately familiar, with a rounded head, silicon ear tips, and a short stem. Imagine them in solid white and you’d probably struggle to tell them apart from the AirPods Pro.

The biggest difference to the shape of the Ear (1) comes in the stem, which is actually slightly squared off, rather than round. It’s a subtle touch, but an important one – it makes it much easier to grab the earbuds without accidentally hitting the touch-sensitive surface, whether that’s to take them out or adjust them in the ear.

The bigger changes are just in how these look. Nothing has built the buds out of a mix of transparent and opaque plastic, to allow you to see some of the internals – a welcome throwback to the heyday of transparent ‘90s tech that also happens to suit the company’s mission statement well.

Unfortunately, the design works better in principle than in practice. For one, the main body of the buds is actually in opaque plastic – so you won’t see the drivers or other moving parts at all.

In the default finish the tips are also white – which looks great up until prolonged contact with the inside of your ears. This was more of a problem at launch, when white was the only option, though fortunately Nothing has announced a black version of the buds, and I’d recommend this finish if you’re worried about keeping the white ones pristine.

It’s mostly the stem that’s actually transparent, but on the outer side it really only reveals a couple of microphones, the red and white dots used to help you recognise the left and right buds (red for right), and a surprisingly prominent logo.

You’ll see more interesting circuitry and magnets on the other side of the stem, but of course this is the bit that’s up against the side of your head, so in all honesty it doesn’t add all that much to the experience.

There’s more transparent plastic on the case, which has a few design quirks of its own. For one, it’s enormous – presumably to help deliver longer battery life, but it does mean that these aren’t very pocket-friendly.

There’s also a strange divot on the top, where the plastic indents into the case. This helps keep the buds in place inside, but does look rather strange.

The magnetic hinge is at least among the sturdiest I’ve felt, meaning that the case feels tough. The plastic itself is less so though – within hours of use the clear material picks up hundreds of micro-scratches, so you should expect this to look scuffed up pretty quickly.

The uniqueness of the Ear (1)’s design is certainly welcome, but I do still have my reservations about it. Between the transparent plastic, coloured dots, white bits, black bits, indents, and more, there’s a lot going on here.

Love it or hate it, this is a design that draws attention, which is itself a curious choice for a company that claims to want to make tech invisible.

If the design has its ups and downs, things are fortunately a little clearer when it comes to how the Ear (1)s sound: pretty great, at least for the price.

No, these aren’t the best-sounding earbuds I’ve ever used. But at £99/$99, with the extra features that these boast, they don’t have to be.

On the balanced EQ there’s enough bass power to drive the thumping bassline on Dave and Stormzy’s ‘Clash’, without overpowering the rest of the track. It’s not quite to head-thumping levels, and at points the lower frequencies sound a touch wooly, but at this price I’m nitpicking.

The balanced mix does more to prioritise vocals in the upper mid-range, to the benefit of poppier tracks like Zella Day’s ‘Golden’ or Caroline Polachek’s ‘Bunny Is A Rider’, though songs with more complex production may sound a little compressed.

The long and short of it is that these sound good, and about as good as any other earbuds at the £100/$100 mark – and certainly better than any others I know of that also include ANC and wireless charging at that price.

Speaking of – the active noise cancellation is likely to be a big draw here. There are other cheap wireless earbuds that feature ANC, but few with the prestige of the Nothing Ear (1).

The noise cancellation here is only average in quality – but again, that makes it good for the price. Even cranked up to maximum (the higher of the only two available settings, except for ‘off’) it won’t block out everything around you, but it will dim most droning or repetitive noises. You won’t forget that you’re on a loud metro train, and it won’t block out that loud couple at the next table, but it will muffle all of this.

For when you do need to hear your surroundings, there’s also a transparency mode, which you can switch to with a long press on either earbud in the default controls. In a smart touch, this will also activate automatically if you remove one earbud but leave the other in – ideal for quick conversations while you’re on the go.

You can control the ANC and transparency, and customise controls, in the accompanying app. Don’t expect a lot of options though, with a clear emphasis on ease of use over comprehensive controls.

In addition to the two ANC options there are four pre-set EQs to choose from (and no ability to create a custom soundscape). As for controls, you can tweak what a triple tap or long press do (skipping track or swapping ANC/transparency by default), but a double tap is fixed to play/pause, and a single tap does nothing.

The other available control is a swipe up and down on either bud’s stem to raise or lower the volume. This is the only touch control that’s a little, well, touchy. It adjusts volume in such small increments that at times it’s hard to tell if it’s working or not. More frustratingly, the one time I’ve worn these in the rain (which should be safe, with an IPX4 rating) the buds recognised the dripping raindrops as a downward swipe, and as a result repeatedly lowered my volume to nothing.

Unfortunately this isn’t the only glitch I experienced over a few weeks testing out Ear (1)s. The first pair the company sent me actually bricked itself – refusing to disconnect from Bluetooth and thus running down its battery, then in turn refusing to charge back up – before mysteriously beginning to work again a couple of days later.

Brief Bluetooth disconnects – lasting a second – have been fairly frequent for me, and I’ve sporadically had a bigger connection problem, where both buds disconnect, but only one reboots, leaving me with one dead earbud that typically takes ten minutes or so to re-connect.

The good news is that between firmware updates and the swap to the final retail hardware, Nothing does seem to have ironed out most of these kinks except the occasional Bluetooth drops – though I’d still hesitate before running with these in the rain again.

Nothing promises a little under six hours of battery life on the earbuds, with a total of 34 hours including the case. That’s without ANC though, and the total battery life drops to 24 hours if you switch on noise cancelling.

In industry terms, this is a good-but-not-great battery life – you will find rival earbuds that last longer, especially with ANC factored in, but most people will find that this gets them through a few days of normal use. Remember that if you use ANC the buds themselves will only last a few hours though, so won’t cover a long flight or similar usage without a charge in-between.

The good news is that the case charges pretty quickly over USB-C, and more impressively it supports wireless charging too. That makes it super convenient to just drop the case on any Qi-compatible wireless charger when you get home and save yourself from having to think too much about keeping the headphones topped up.

That means that they’re no longer cheap enough to be what we consider budget true wireless headphones, though the newer Nothing Ear (Stick) are. They’re not quite an impulse buy for most people, but cost far less than flagship audio gear – or any pair of Apple AirPods.

The price is still impressive considering the inclusion of both ANC and wireless charging – two luxury headphone features that are occasionally seen separately at this end of the price spectrum, but rarely both together for so little.

For rivals around the same price, consider the Google Pixel Buds A, the slightly more expensive Cambridge Audio Melomania Touch, or an older pair of Samsung buds like the Galaxy Buds+ or Buds Live – both now often available at this sort of price.

The price is ultimately what makes something out of the Nothing Ear (1). On paper, the Ear (1) overpower almost all the competition at the price point simply by virtue of including premium features like ANC and wireless charging.

The good-but-not-great audio and battery life still hold their own against other mid-range buds, so really the main concerns here are my slightly buggy early experience and the divisive design, which is just as likely to draw you in as it is to put you off.