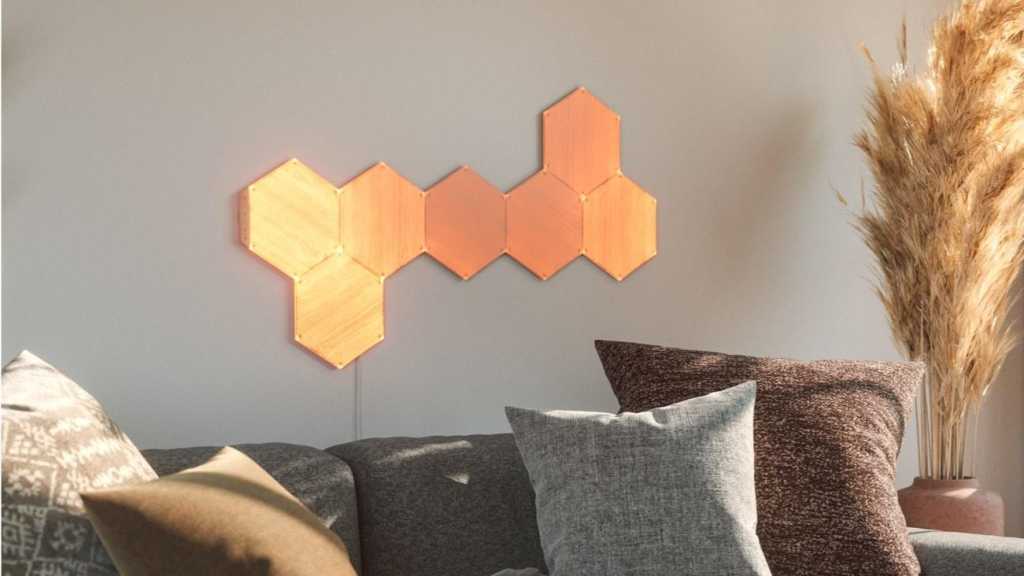 The Nanoleaf Elements kit is certainly the best looking smart light option for your wall but it will be too expensive for many and has limited features to boot.

Smart lighting has become increasingly popular, perhaps even more so considering how much more time we are spending at home these days. Whether you want to brighten up your living room or provide some calm in your home office, Nanoleaf is on hand with a range of different systems.

The latest is the Elements series, which offers a similar experience to the Shapes Hexagons I tested last year but with a wood-effect finish.

As alluded to, Nanoleaf Elements is essentially the Hexagons kit but with an effect that makes it it look like it’s made from, well, wood.

I wasn’t sure what to expect but getting the panels out of the box I was pleasantly surprised. They look really great, and the effect isn’t just some cheap vinyl sticker put over the top; it’s got the texture of the grain too.

While the tiles might not appear exactly like freshly sawn and sanded wood, it’s a similar look and quality to laminate floor – in fact, Nanoleaf describes it as “Laminate with a wood grain finish (PVC)”. The controller does look like it’s a piece of wood that’s had the edges rounded off. 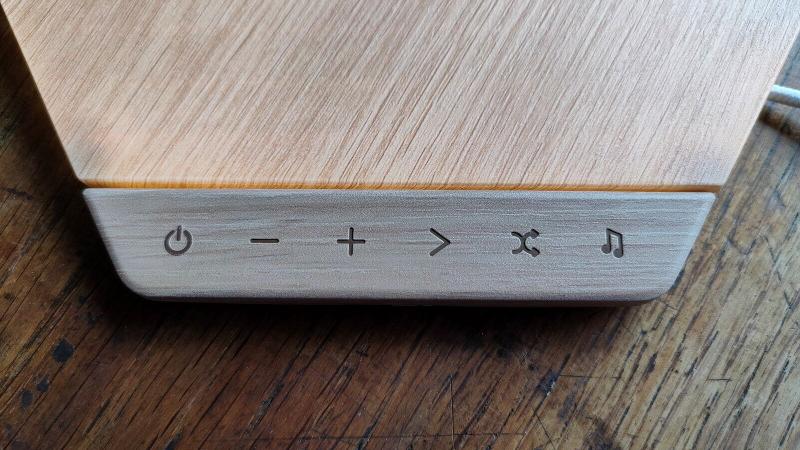 As per other Nanoleaf kits, you can choose where you attach the control panel and power lead, which has a long 2.5m cable. You can also arrange the tiles in various formations, with a number of suggestions on a leaflet in the box.

Each tile sticks to the wall with a sticky foam pad and connects to each other with small snap-on plastic connectors. The tiles are fairly large at 9in across (point to point) so I’d recommend trying your layout first before sticking it to the wall. The app also has a layout assistant to help you.

I’d still like more information in the physical paper manual that’s included in the box. Apart from some installation dos and don’ts, it’s mostly a small series of pictures with no accompanying words. 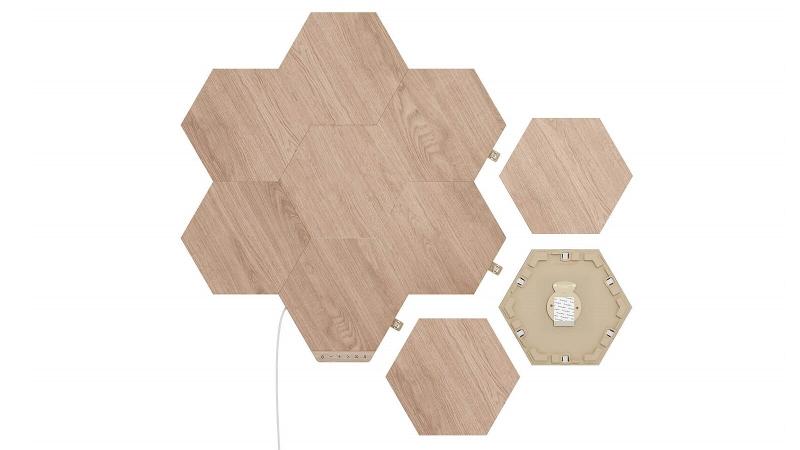 You’ll find information on the web for what to do – I opted for NFC, meaning tapping my phone on the controller was an easy way to pair the Elements kit.

It might seem like the Elements kit is the same as Shapes Hexagons but it’s more than just a wood finish. The design means that Nanoleaf has gone with a simpler lighting range, so rather than supporting over 16 million colours, it uses a range of whites.

It goes from cool to warm (1500-4000K in terms of temperature) which essentially means they go from a bright white to an orange colour. They’re not technically as bright in comparison to the Shapes Hexagons but I found them bright enough and there are 10 levels of illumination to choose from.

And, for your information, the lights last 25,000 hours so would only conk out after 14 years if you use them for five hours a day. 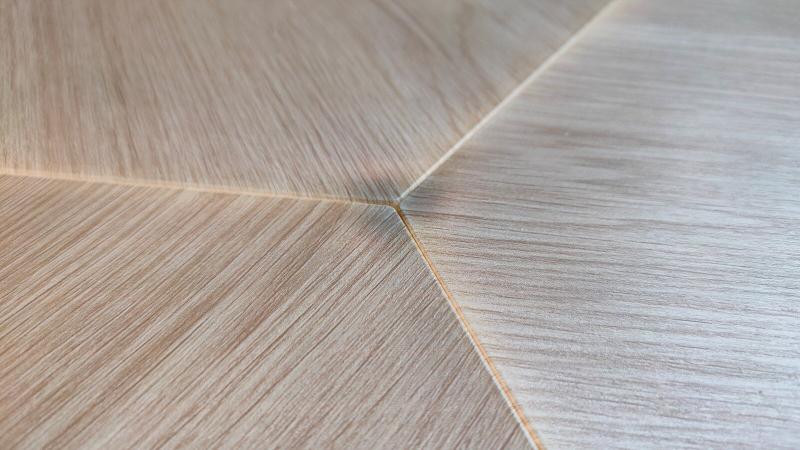 A big improvement over the Shapes Hexagons is that the Elements kit can shine light much closer to the points of the hexagons, so you don’t end up with the same circular shape of light. Overall, it looks much better.

The controller has touch-sensitive buttons that work well and give you control over power, brightness, scene selection and Music Sync mode. Using the app will allow you to dive deep into various settings, though.

That Music Sync mode, as I found on the Shapes kit, requires the source to be either nearby or very loud and doesn’t sync with the music as well as I’d hope. Though it does depend on what you listen to, with dance genres faring better thanks to a strong beat.

By default, the app has 13 different pre-loaded modes you can try with a mix of options. However, you can create your own if you like and also create playlists for the tiles to cycle through. There’s also a discover tab where you can download scenes that other people have made. 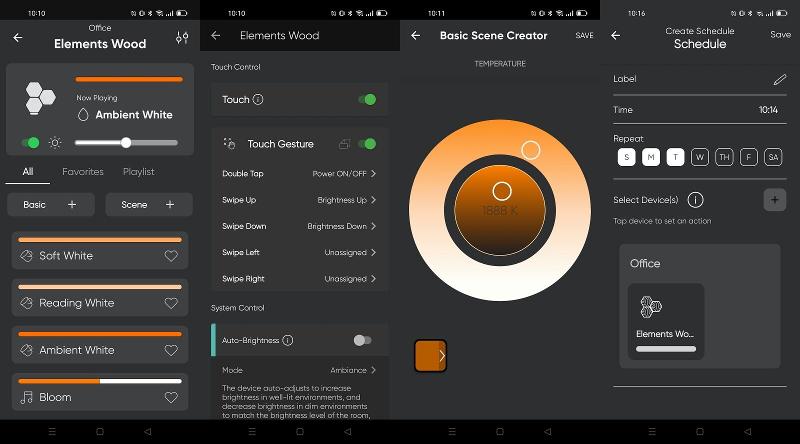 Schedules might also be useful, especially if, for example, you put the lights in your bedroom and want to set them to come on at a certain time in the morning to help wake you up or help you fall asleep.

The features keep coming as the tiles are touch-sensitive and you can assign things like power and brightness to different gestures in the app. It’s not flawless to use but does work fairly well once you get used to it.

There’s also support for smart home integration so Elements is compatible with Google Assistant, Alexa and Apple HomeKit, meaning you can control the lights with your voice to switch them on and off, adjust the brightness and choose a scene (if you can remember what it’s called).

Note that while other Nanoleaf kits make for great lights above a monitor or TV, the lack of colour on the Elements kit means it doesn’t support features like Screen Mirror or integration with Razer gaming gear. However, you can use the desktop app to control the lights from your Windows PC or Mac.

Something that hasn’t changed is how expensive Nanoleaf kits are, and the Elements kit, with its unique design, is even more pricey than the Shapes Hexagons.

The Starter Kit tested here will set you back £199.99, gaining you seven tiles and the control panel. An expansion kit containing three tiles is £69.99. You can buy it from the official store as well as retailers like John Lewis, Very and Apple in the UK.

Although there’s not an official US page, Best Buy sells the starter kit for US$299.99 and the expansion pack for US$99.99.

Check out more options in our best smart lights chart.

While the Nanoleaf Elements kit doesn’t offer the full range of features compared to the brand’s smart lighting range, it certainly looks best.

The wood effect is high quality and looks very realistic. It will appeal to anyone who has seen these types of systems but doesn’t want huge white tiles on their walls.

You are limited to cool and warm white lighting, but this makes sense for the panels, matching the more classy, interior design-forward approach. Buyers will just have to hope there’s enough budget left from redecorating to afford the Elements kit.