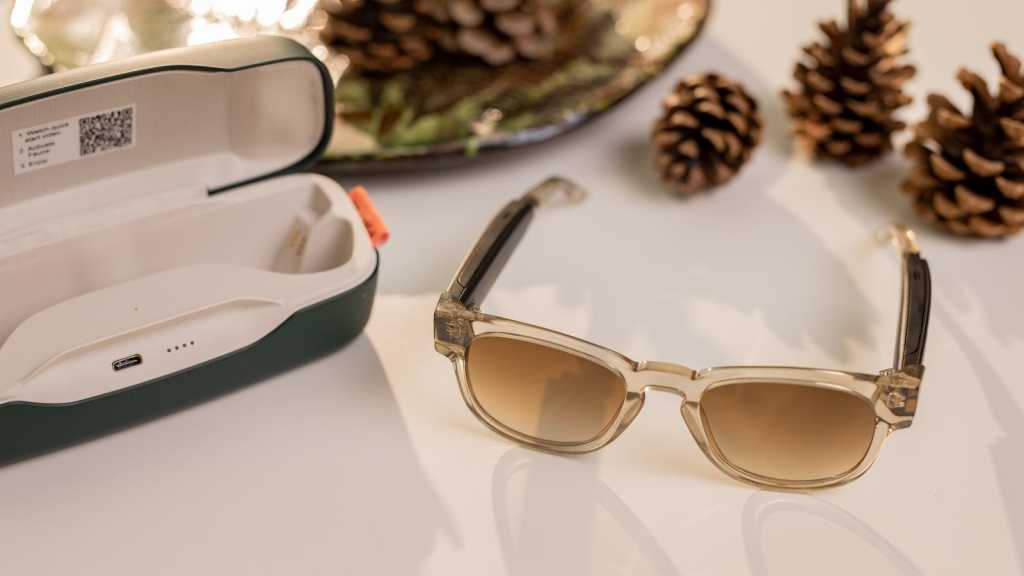 These audio glasses are best-suited to audiobooks, podcasts and phone calls, more so than music, but offer quality lenses and better spatial awareness than headphones.

“Don’t you wonder sometimes about sound and vision?” sang David Bowie back in 1977, when a pair of headphones looked like you’d strapped half a football to each ear.

Even a forward thinker like Bowie would have been amazed at the idea of spectacles that also played sound but that’s exactly the concept behind Fauna’s Audio Glasses – a pair of sunnies with integrated speakers.

Much has been made of futuristic smart glasses that project data and pictures in front of your eyes but not much – outside of VR – has actually made it into general usage.

Glasses with audio aren’t completely new. Premium audio maker Bose released its Frames audio sunglasses a couple of years back and Huawei teamed up with Korean sunglasses designers Gentle Monster to serve up two generations of its Eyewear audio specs.

The thick-rimmed Fauna Audio Glasses are stylish, well-made and come fitted with top-quality Carl Zeiss lenses. Despite being heavier than their most like-minded competitors, at 65 grams they still feel pleasingly lightweight when worn.

If you are a glasses wearer, you can also have the existing lenses exchanged for prescription lenses by an optician; a nice bonus from the outset, considering it took Bose approximately a year to offer such a feature after it first launched Bose Frames.

You can choose between the Memor Havana and Levia Black frames, both of which sport DuraVision BlueProtect lenses to filter out blue light. Alternatively, the Spiro Transparent Brown (tested here) and Fabula Crystal Brown sunglasses sport lenses that protect your eyes from UVA and UVB rays.

The arms of the glasses are broader than most conventional specs, as this is where the speakers and microphones are situated.

All Fauna Audio Glasses are also IP52 water and dust resistant, meaning they’re equipped for lying on the beach, but not for swimming in.

The big advantage of audio glasses over headphones ( noise-cancelling or otherwise) is that background noise isn’t blocked out; so you retain greater situational awareness, while still being able to enjoy your tunes, podcasts or phone calls.

The downside is that – by wearing mini speakers attached to your temples – they suffer from a fair amount of sound leakage. It would seem that Fauna’s acoustic design doesn’t direct sound as effectively as rival audio glasses and by extension, sound isolation isn’t all that robust either.

At low volumes, you might go unnoticed, but with things turned right up, these will likely annoy anyone near you – especially when in an enclosed space. Wearing them on public transport, for example, would be best avoided and anyone on a phone call would be wise to remember that others immediately around you will likely be able to hear both sides of your conversation.

In their ideal use-case of open outdoor spaces – like parks, beaches etc. – this sound leakage is obviously far less of a problem, but it’s still worth considering putting some distance between you and innocent bystanders when listening to anything.

Bone-conduction audio transmitters – like those used in many hearing aids – would dramatically reduce sound leakage, but audio quality would also take a hit.

The audio quality from Fauna’s four micro-speakers (MEMs speakers and subwoofers) certainly isn’t up there with a decent pair of traditional on or in-ear headphones (see our best headphone recommendations for some top-notch alternatives).

Despite the subwoofers, bass is unquestionably lacking; with this absence of depth resulting in overall sound that’s pretty tinny when playing most genres of music. Gentle chillstep sounds okay – so these could be useful for wellness sessions – but rock is not represented as rock as fans would probably demand, for example.

In contrast, sound quality from spoken-word content comes across much more positively; making these better companions for regular audiobook or podcast listeners.

The quality of phone calls is also above average. Being able to take a call without holding your phone is a real advantage when you need both hands free, and as an added bonus, reduces the probability of phone theft.

While other wearables – like smartwatches – also let you make and take calls in place of holding your phone directly, doing so via a device on your face is a lot more comfortable and convenient than keeping your wrist to your ear or mouth (depending on who’s doing the talking).

Fauna wisely doesn’t claim that its Audio Glasses rival Apple, Beats, Sony or Bose with regards to audio quality, and, while lacking much in the way of depth, the sound is acceptable in the conditions that such glasses are best suited to.

The blue light-filtering variants (excessive blue light has been linked to reduced sleep quality and eye strain) would work well in a non-crowded office setting for personal background music or video conferencing.

The arms of Fauna’s specs double as touchpads, letting you control various audio attributes with a combination of taps and swipes. Sliding your finger along the arm adjusts volume and double-tapping or tapping and holding accepts/declines/ends phone calls, plays/pauses/skips music or summons your paired device’s virtual assistant.

Pairing and waking the glasses threw up a few annoyances, such as a repeating issue where sound would only come out of one of the arms on occasion. Putting the glasses back in the charging case sorted this out, and while this issue is present on plenty of true wireless headphones too, it did seem to rear its head more often than expected (perhaps something Fauna could address in subsequent software updates?).

Fauna’s battery life is pretty average at four hours of wear, or 20 hours standby. A decent pair of headphones will give you double that between charges, however, when the glasses die they’re still blue light-filtering or sunglasses; when your headphones die they’re, at best, unorthodox ear jewellery or, more realistically, useless until they’ve been recharged. 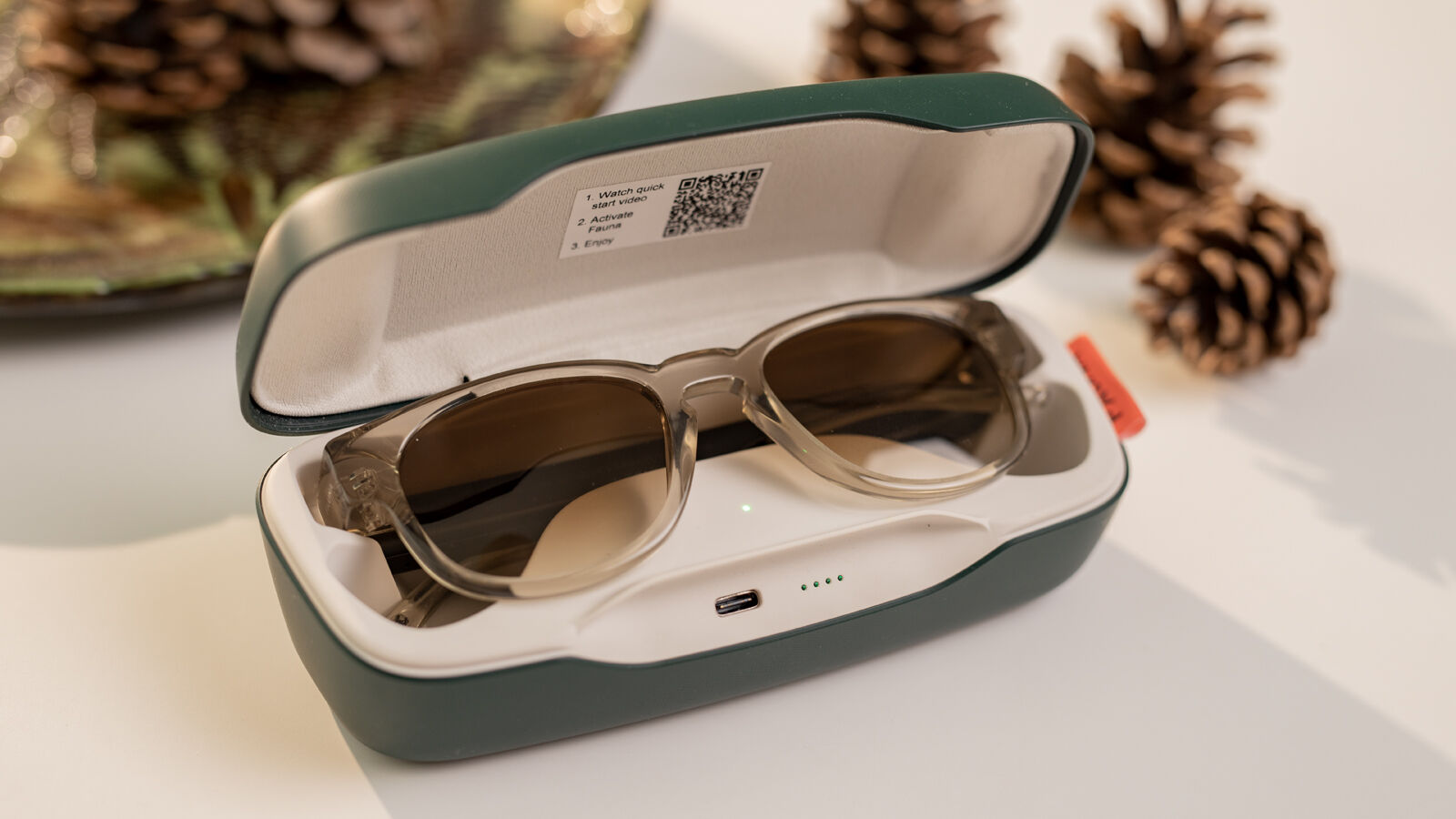 The (210g) charging case feels well built and beautifully designed. Charging works well via a simple reversible USB-C cable and four LED indicators display how much charge remains; lighting up each time you open the case up.

Fully charged, the case should give you four charging cycles or around 16 hours before it’ll need to be recharged again.

Quality eyeglasses don’t come cheap and the Fauna Audio Glasses aren’t a budget option by any means, at US$299/£249/€249.

Being a fashion-centric item, you can, of course, pick up glasses that do a lot less than the Faunas for a lot more money and equally purchase shades with additional features – like polarised lenses – for less than what these are on offer for. Even so, the company’s pricing doesn’t feel like it packs too much of a sting and they’ve only gotten cheaper since launch.

A lower price for people who intend to swap the pre-fitted lenses for prescription lenses from the outset would have been a sensible option for buyers too. Perhaps that’s something for Fauna to consider for its next-generation specs; if it doesn’t decide to partner up with an opticians, in a similar fashion to Bose and Lensabl.

You can buy Fauna’s Audio Glasses directly from the company or through retailers, such as Maplin, in the UK.

Fauna Audio Glasses work best in situations when you want to hear the world around you as well as some spoken-word or light musical accompaniment, all while protecting your eyes from the harmful light of the sun or a screen. An optician can easily add prescription lenses if you need them, which is a nice bonus too.

They are stylish and comfortable and should tick boxes for a lot of people when it comes to looks and functionality. While they don’t offer headphone/earbud-quality audio or noise isolation, they do work well with audiobooks, podcasts and phone calls.