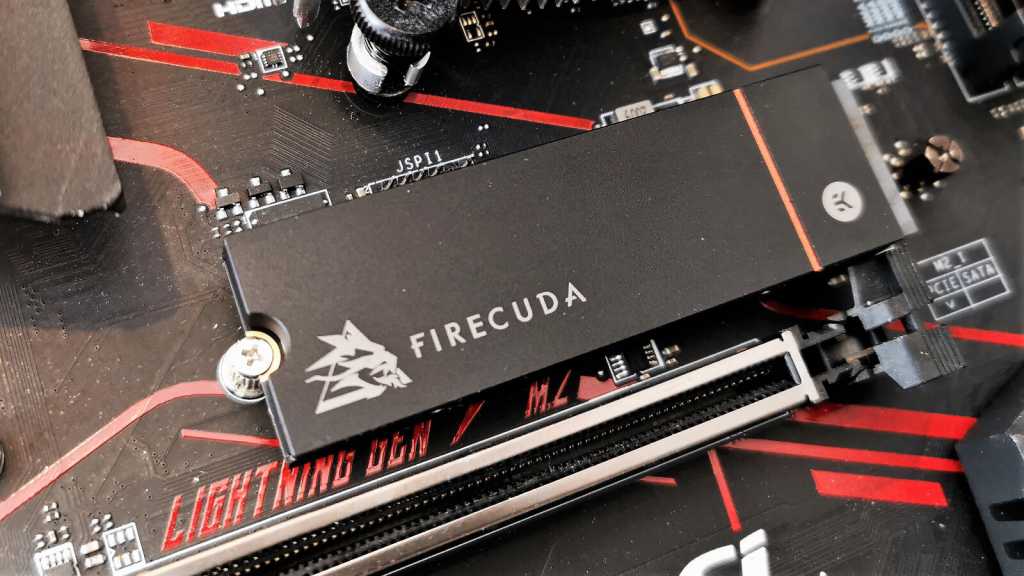 A drive that exceeds all other NVMe drives in almost every metric is the dream storage device for most gaming and workstation systems. And it could also be the ultimate upgrade for PS5 owners if they can afford one.

Seagate usually reserves the FireCuda Gaming branding for products that are unique in some aspect. Under this banner, Seagate has released hybrid drives, SATA SSDs and NVMe solutions. Although the target audience for these devices is gamers, the performance they offer is also often of interest to those who generally want enhanced performance in their system.

Coming on the back of the previous FireCuda 520 design, the new 530 is Seagate’s second NVMe offering to support PCIe Gen4.

The FireCuda 520 only offered 5,000MB/s read performance, where Seagate and Western Digital both have modules that can be 40% faster than this, hitting 7,000MB/s.

Was it worth the wait for the FireCuda 530, and does it provide the high level of performance that gamers believe gives them a competitive edge?

The review sample provided by Seagate was of the 2TB FireCuda 530, with 500GB, 1TB and 4TB options also available. It also comes with an integrated heatsink, though it is possible to purchase this unit without the heatsink at a reduced price.

As NVMe drives go, the FireCuda is on the elegant side, sporting a matt black finish with the FireCuda branding in gold.

I’ve seen some large and exotic heatsink shapes on NVMe drives, but this one is the most reserved, and that has some distinct advantages. Specifically, that this form factor will fit in the NVMe slot of a PS5, which can’t be said for all Gen4 NVMe designs.

Screws on the side of the heatsink secure it to the module. Normally I’d of taken it apart, but didn’t want to disturb any thermal interface between the heatsink and the module before the abusive testing regime.

If I had removed it I’d of hopefully seen the Phison E18-PS5018 controller and 3D TLC Micron B47R 176L NAND modules used in this design. That exact controller is also in the Sabrent 4TB Rocket 4 PLUS, MSI Spatium M480, Gigabyte AORUS Gen4 7000s, so how is the FireCuda 530 so much faster?

All those competitor designs have wired their Phison controller to NAND that is 96-layer, where the Micron B47R 176L is, as is hinted at in the name, 176 stacked layers.

That organisation of the NAND gives the FireCuda greater throughput, allowing the controller to deliver the high level of performance that so far only this module can provide. With this scale of NAND and the extra complexity of a controller with triple 32-bit ARM Cortex R5s, both sides of the board are needed for mounting components.

To get the most out of this design requires a motherboard with PCIe Gen4 M.2 slots. Except for the new Intel Z490 chipset motherboard, that invariably means an AMD X570 or similar platform.

The FireCuda 530 will work on a Gen3 slot, but the bandwidth will be curtailed, reducing the overall performance to about half of what a Gen4 system can achieve so bear this in mind.

When I talk about NVMe endurance, it isn’t a feature that can be practically tested. Even the very worst performing drives might run with a heavy load for months before failure occurs.

Therefore I have to take the module makers at their word on this one facet of their products. 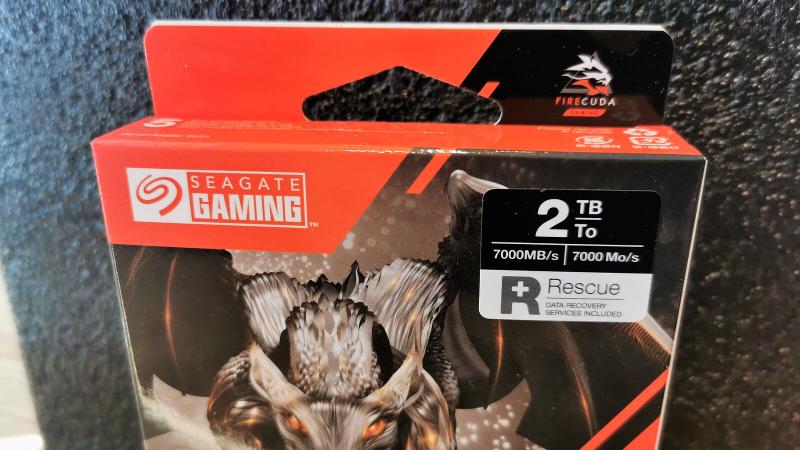 All the FireCuda 530 drives come with a five-year warranty and three years of data recovery, but also some of the largest TBW (Total Bytes Written) numbers I’ve yet seen for their respective capacities.

I’m wary of small capacity drives because of their lower TBW, but the 500GB drive in this series offers a meaty 640TB. That doubles for each subsequent capacity size leaving the 4TB with an awe-inspiring 5,100TB of lifespan. That’s a remarkably big figure.

To put that into an easier-to-digest number, that’s the equivalent of writing the entire capacity of a 1TB drive every day for just under 14 years!

Not that those numbers are a guarantee the drive wouldn’t fail before it reaches that point. But Seagate is confident enough that it should go that far or that its customers are unlikely ever to discover where it will fail. Realistically, the lifespan of the 1TB drive and above is so massive that most customers are unlikely to live long enough to challenge these assumptions.

Even for those that write large amounts of data every day, as in 4K video editing, the TBW of the 2TB and 4TB drives is unlikely to be an issue.

If you don’t like big numbers, then move on to the next section, as this part is full of them. The theoretical bandwidth of a PCIe 4.0 four-lane M.2 slot is 8GB/s, but there are always overheads to any transfer that eat into that number.

Seagate quotes a maximum of 7,300MB/s reads and 6,900MB/s writes for the 2TB review sample, and over most of the synthetic benchmarks, I hit those numbers or even slightly bettered them.

CrystalDiskMark 8.0.4 in the default profile achieved 7,380MB/s reads and 7,040MB/s writes, which are incredible scores. This bench’s real-world profile saw lower read performance but still write speeds that are faster than any PCIe 4.0 NVMe I’ve tested so far.

The Phison E18-PS5018 controller is rated to 7,400MB/s reads and 7,000MB/s writes, so there isn’t much extra performance to tweak from this system.

Each drive has DDR4 memory for caching, scaled on capacity, and uses an SLC dynamic cache alongside a technology called SmartFlush to recover the SLC cache space quickly. This combination minimises the likelihood that a write operation runs into the underlying NAND performance limits.

It is possible to overrun this space given a large enough file. I’m talking 100GB or more files, so this isn’t a problem that most will encounter. If you exhaust the cache, performance drops to around 1,500MB/s, which isn’t the very low levels I’ve seen on some NVMe drives where it can be as slow as 500MB/s.

The quoted IOPS for the 2TB drive is a million for both reading and writing, though my testing only managed to hit about 800K. This might be the only place where this drive isn’t the best, as both the WD Black SN850 and Samsung 980 Pro achieved over 900K IOPS in tests.

Peak IOPs aside, the performance of the Seagate FireCuda 530 is exceptional and moves the bar up on what internal NVMe storage can realistically deliver.

My only caveat is that this drive will throttle if it gets too hot, so I don’t recommend running it without thermal protection. Either get the heatsink version or mount a third-party heatsink on it, as this will reduce the impact of it getting hot, and it will also extend the working life of the drive.

While we might see some tiny improvements from future products, for any significantly larger scores, PCIe 5.0 technology will be required and drives designed to work with that interface.

As I mentioned earlier, this drive will fit inside a Sony PS5, but until very recently fitting inside and working weren’t the same thing.

Sony has promised that the M.2 NVMe expansion port on the PS5 would eventually be made available to those that could put in it a drive that met a very specific performance level.

For some time, it has been possible to install a Gen3 drive, and it would allow PS4 games to be installed, but not PS5 titles. But the advent of a recent Beta 2.0 firmware release, up to 4TB drives that can achieve 5500MB/s read speeds can be used to install and run PS5 titles.

Those that have performed that modification report that the PS5 scores this drive with a read speed of over 6,500MB/s in this console (including The Verge’s Tom Warren), putting it firmly on the right side of this line.

As this functionality moves out of Beta into mainstream release, it is hoped that Sony will release an official list of expansion drives that they support, and as it is the quickest, the FireCuda 530 will certainly be one of them if Sony does.

For those with a PS5 considering this modification, I strongly recommend that you use a drive with a heatsink attached. And, pick a design like the 530 that has a heatsink small enough that it won’t cause a problem fitting inside the expansion bay.

It’s important that the drive gets sufficient cooling, and a bare module could easily overheat in the confined space and limited airflow of the PS5 expansion bay.

Having some of the very best drive performance available was never going to be cheap, but those wanting to purchase the 4TB model will need deep pockets.

If you want the heatsink model, then these costs increase by about £30, making the 4TB model a cool £809.99. You can buy it from the likes of Amazon, Ebuyer and Overclockers.

Amazon US currently says unavailable but you can buy the SSD from Best Buy and Newegg.

And, no, I’ve no idea why the identical heatsink on a 500GB drive costs just $5, but magically costs $50 on the 4TB option. If you have a motherboard with an integrated NVMe heatsink and you want the larger capacities, you might save some money.

How does this compare with other high-performance PCIe 4.0 NVMe?

As a range, the Seagate FireCuda 530 is more expensive than most other brands at each capacity, but there are relatively few that offer a 4TB capacity.

The WD SN850 is probably the drive that many might consider, but the maximum capacity available for that is 2TB. The 2TB SN850 with heatsink undercuts its FireCuda 530 equivalent by US$110, but write speed is only 5,100MB/s or 1,800Mb/s less.

Other options include the previously mentioned MSI Spatium M480 and Gigabyte AORUS Gen4 7000s, but again these might be cheaper but don’t deliver the raw performance of the Seagate drive.

Overall, if you want the performance and the 4TB option, then it’s the FireCuda 530 or the highway until more competitive products hit the shelves.

Not sure which SSD to buy? Check our  best SSDs chart with 10 great options and buying advice.

It’s rare to find a product that delivers on its promise so comprehensively, but the Seagate FireCuda 530 does.

The product even includes a special warranty with three years of data recovery should the drive fail with critical data on it that you need back, something we’ve previously only seen included with enterprise-class devices.

In short, the FireCuda 530 is the drive all gamers want if their system has PCIe 4.0 and they can afford it.

And predictably, the cost here is the catch. Compared to other PCIe 4.0 solutions, this is at the expensive end of the spectrum, especially for those that want the 4TB capacity unit.

Its domination of the NVMe world won’t last forever, as others are using the Phison controller already, and NAND with 176 layers or more will undoubtedly be heading to other module makers.

But in the meanwhile, Seagate has the unique position of making the fastest PCIe 4.0 drive, possibly one that truly exploits all that interface has to offer, and they have the blessing of Sony as a drop-in expansion for the PS5.

We expect the real problem with the FireCuda 530 is that available stock might not handle the levels of demand this product is very likely to see.