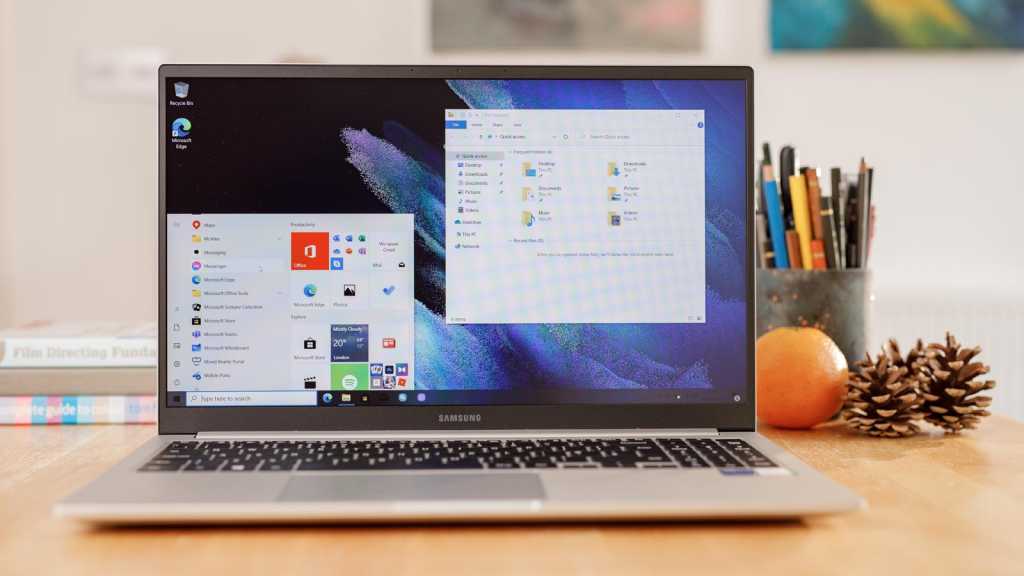 The Galaxy Book has the potential to be a great laptop, but its key weaknesses have a big effect on day-to-day usage. Considering the strength of the competition, most people are better off looking elsewhere.

After a five-year hiatus, Samsung returned to laptops with a bang in 2020. Alongside Qualcomm and Intel versions of the Galaxy Book S, we also saw a new convertible in the Galaxy Book Flex and regular clamshell Galaxy Book Ion.

The range has been significantly expanded in 2021, with the new Galaxy Book Pro and Flex 2. However, there’s also evidence that Samsung is catering more to affordable price points than ever before.

The ARM-based Galaxy Book Go has been joined this year by an Intel-powered device known simply as the Samsung Galaxy Book. It offers a lot of what most people are looking for on paper, with the latest Intel chips, a full-size keyboard and a large display.

But how well does it stack up to real-world usage? I spent a few weeks with the device to find out.

When it comes to design, Samsung has played it fairly safe with the Galaxy Book. Its curved edges and sleek aluminium finish have been seen on countless other laptops, including the company’s own Flex 2. In fact, aside from the variation in sizing, it’s hard to tell these two Samsung laptops apart from the outside.

It’s very much a minimalist aesthetic, especially as there’s no alternative to the ‘Mystic Silver’ colourway – a little odd considering Samsung normally likes a splash of colour on Galaxy products. If you want your laptop to stand out or be a conversation starter, you’ll need to look elsewhere.

The Galaxy Book certainly has a more distinctive design once you flip open the lid, something that’s possible with just one finger. The first thing you’ll probably notice is the large 15.6in LCD display – more on how it performs later.

It’s housed within some slim bezels, although there’s still room for a 720p webcam. The quality of this sensor is in line with most you’ll find built into modern laptops; it’s fine for video calls, but streamers or YouTubers will need a separate accessory.

Unfortunately, it’s not compatible with Windows Hello face unlock. Given the absence of a fingerprint sensor, it means you’ll still have to type a PIN or password every time you unlock the device. I can’t understand why Samsung didn’t add support for at least one of these other than to save money.

It’s not like there’s no room on the keyboard, either. That large display means the Galaxy Book has space for both a full-size keyboard and a separate number pad. The keys themselves offer very little travel, but they’re impressively tactile and responsive – I was satisfied with how they performed.

However, the same can’t be said for the trackpad. Samsung has included a huge one the Galaxy Book, but it’d have been better off focusing on its performance. I found it to be very erratic and unreliable, with the cursor frequently moving around the screen at random or not registering my command.

This remained the case even after a software update mid-testing, so I think it’s hardware related. I’d highly recommend connecting a Bluetooth mouse, but it limits the device’s portability somewhat.

That’s a shame because at 1.55kg it’s one of the more lightweight 15in laptops you can buy. Samsung hasn’t tried to make the Galaxy Book ultra-thin for the sake of it, though – at 15.4mm thick, there’s plenty of room for ports.

The device makes the most of it, too, with a selection that you won’t find on many modern laptops. I’m talking 2x USB-C (either of which can be used for charging), 2x USB-A, full-size HDMI and 3.5mm headphone jack.

There’s even a lesser-spotted microSD card slot, so you probably won’t need to carry an adapter around with you.

Let’s talk about that display, then. It’s a 15.6in LCD panel, at a resolution of 1920×1080. Despite not being OLED, I was satisfied with its performance. Colours are rich and vibrant, offering an impressive level of detail for the price. While surfing the web, word processing and watching videos, I can have no complaints.

However, that’s not reflected in the SpyderX display analysis I performed. That suggests it only hits 63% of sRGB color gamut, 47% AdobeRGB and 46% of DCI-P3. This isn’t a big issue for everyday usage, but graphic designers or photo editors will want something much more accurate.

I recorded a maximum brightness of 325 nits using the same tool, so outdoor usage will be a struggle. Unlike the Flex 2 and other Samsung laptops, there’s no option for the ‘Outdoor+’ brightness booster here.

Viewing angles are good though with Samsung’s PLS technology, essentially its own version of IPS.

One feature I really miss here is touch support. Samsung will likely say it’s not needed on a non-convertible device, but I wish it’d introduced both features instead. Considering the navigation problems mentioned above, a touchscreen would have been a useful alternative.

Like the lack of biometrics, it’s a cost-cutting choice to keep the final price as low as possible.

On the audio side, it’s a more impressive story. The Galaxy Book feature features dual 2W speakers, alongside Dolby Atmos support. These specs aren’t revolutionary by any means, but both music and voices are warm and rich, picking out details you won’t hear on some other laptops.

It’s slightly lacking in bass and can distort at higher volumes, but audiophiles can easily connect external speakers or headphones.

The Galaxy Book might be one of Samsung’s more affordable laptops, but it hasn’t made big sacrifices under the hood. Like so many 2021 computers, it’s powered by Intel’s latest Tiger Lake chips – the model I tested uses the Core i7-1165G7, but it’s also available with the Core i5-1135G7.

Both use Iris Xe integrated graphics, and feature 8GB of RAM.

Judging from the sample I tested, performance is one of the Galaxy Book’s key strengths. I noticed almost no slowdown across a variety of everyday tasks, including web browsing, word processing and some photo editing. The large display also makes it great for multitasking – using a web browser, Slack and a word processor at the same time is easily achieved.

This great performance doesn’t quite extend to graphically-demanding AAA gaming – a discrete GPU is recommended for that. But casual games are well within reach.

As you can see from the benchmarks below, the Galaxy Book compares favourably with many similarly-priced laptops. These figures will inevitably take a hit if you’re using the i5 model, but everyday performance should still be solid.

The Galaxy Book has both Wi-Fi 6 and Bluetooth 5.1 on board, but there’s also the option to add 4G LTE connectivity. That wasn’t available on the model I tested, but it’s a great solution for on-the-go productivity.

There’s usually very little to talk about when it comes to the software on Windows laptops – it’s usually the same regardless of which device you go for. While that’s still the case, it’s worth mentioning Windows 11 here. Microsoft’s new OS is set to arrive in late 2021, which might make you uneasy about buying a new Windows 10 laptop right now.

However, there’s no need to worry. The Samsung Galaxy Book meets all the new hardware requirements, so it’ll be eligible for a free upgrade to Windows 11 Home at some point. You may have to wait until 2022, though.

The version of Windows 10 you get right now is very familiar to anyone who’s used a Windows PC recently. Unlike with its smartphones, Samsung has kept the software tweaks to a minimum. There are a handful of pre-installed apps, such as Samsung Notes and Gallery, but these can be uninstalled if you like.

You also get a relatively basic Samsung settings menu in addition to the regular one, which offers extra functionality you won’t normally find on Windows 10. These include a range of different performance modes and the option to limit the maximum charge to 85%, which is said to extend the lifespan of the built-in battery.

Talking of battery, the Galaxy Book’s cell comes in at 69.7Wh. That’s a solid capacity, so it’s no surprise to see Samsung claim you can get up to 10.9 hours from a single charge.

Unfortunately, my experience with the device wasn’t as impressive. Despite having the brightness set to a relatively dim 120 nits and looping a 720p video offline while muted, the Galaxy Book only lasted 7 hours and 24 minutes.

Many of the laptops we’ve tested recorded more than double that, so it’s an underwhelming performance.

What’s more, real-world usage depletes the battery significantly more quickly. Bumping up the brightness and having multiple open windows and apps means you’ll struggle to make it through a full workday. Indeed, I found myself reaching for the charger by mid-afternoon.

However, charging speeds are more in line with what you’ll find elsewhere. Samsung advertises fast charging using the 65W adapter in the box, and I recorded a reasonable 39% in 30 minutes from off.

There are four variants to choose from when it comes to the Samsung Galaxy Book. These start at £699 for the i5 model with a 256GB SSD, or £799 for the same configuration with 4G support.

Stepping up to i7 and doubling the storage to 512GB will set you back £899, although you’ll have to pay £1,099 for 4G support. We can’t find anywhere to buy the device in mainland Europe or North America right now, so you’ll probably need to import it.

While you can pay four figures here, that doesn’t quite put the Samsung Galaxy Book in flagship territory, and many people will be happy with one of the cheaper models. Unfortunately, many of the entries in our best laptop chart are available for a similar price, including our current top pick – Huawei’s MateBook 14.

When you compare these devices side-by-side, the Galaxy Book doesn’t represent great value for money. Some slightly more affordable would have been much more tempting.

Samsung has proven it can make great smartphones that don’t break the bank, but it still has work to do when it comes to laptops.

The regular Galaxy Book gets a lot of things right, with a premium build, excellent performance and decent display. Audio is also very impressive, and there’s a decent port selection.

Unfortunately, Samsung has cut too many corners to get there. Battery life is underwhelming, trackpad navigation is very poor and there’s no fingerprint scanner or face unlock. I also miss the touch support and convertible functionality you get on so many laptops these days.

If you can find the Galaxy Book with a significant discount, it’s probably worth taking the plunge. Otherwise, it’s hard to justify in the ultra-competitive world of modern laptops.