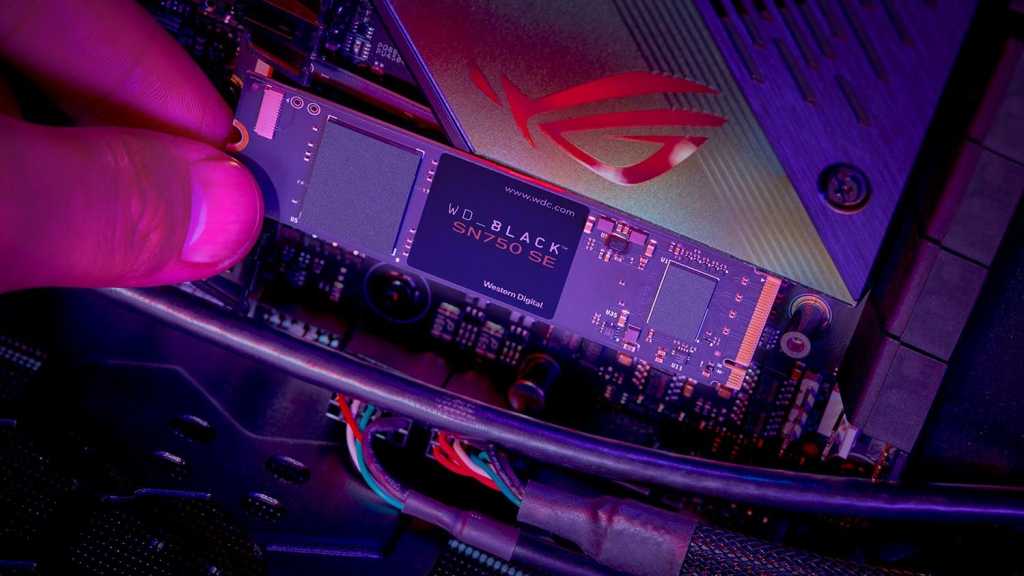 The 750 SE is mostly a production cost exercise that has had the knock-on effect of negatively impacting the smaller capacities write performance. It might be a few dollars cheaper than its predecessor but is still too expensive compared to other brands.

The appearance of a ‘SE’ or ‘special edition’ version of a product can signal numerous things. Often it’s the final swansong of a successful product where a modestly enhanced version is created to exhaust component stock that still exists.

Alternatively, new parts become available that allow the specification to improve without impacting on build costs. And, it can also be that the SE version has a unique branding or an extra feature that was imagined in development but never made it into the first product release.

So what makes the WD_Black SN750 SE special?

Western Digital has a long and convoluted history with storage devices, mostly those based on spinning metal disks that use magnets fields to store and retrieve data. But, like all hard drive makers, it eventually realised that the future probably didn’t involve moving parts, and began a transition to solid-state technologies for retail and enterprise customers.

A second-generation NVMe drive, the original SN750, first appeared in early 2019. And, depending on the capacity, it offered a maximum of 3,470MB/s reads and 3,000MB/s writes using a Western Digital designed controller and SanDisk 64-layer 3D TLC NAND Flash.

How much better the SN750 was to Western Digital’s first-generation NVMe drives is hard to overstate. It elevated the line to compete directly with the mighty Samsung and its 970 Evo.

But these differences might be in your favour if you’re looking for an NMVe drive of a specific capacity, and Western Digital is a brand you trust.

The evolution of NVMe drive design has been a fascinating thing to watch, as we’ve rapidly progressed from M.2 2280 sticks with many discrete components on both sides to drives that look decidedly less complicated.

On the SN750 SE 1TB, there are no visible parts on the underside, and the top surface is dominated by a single NAND package and the 32-bit Phison PS5019-E19T controller fabricated by TSMC.

This chip is a change from the proceeding design, and it’s part of the reason that where the SN750 came in 1TB, 2TB and 4TB options, the SN750 SE caps out at 1TB.

Where the PS5019-E19T can support up to 2TB, and that capacity might be added, the 4TB SN750 won’t ever be replaced by this design. Conversely, this is a PCIe Gen4x4 specification controller, although the NAND module arrangement doesn’t allow speeds that would exceed PCIe Gen3x4 bandwidth.

The controller is a DRAM-less design that is backwards compatible with PCIe Gen 1, 2, 3 and 4 with the maximum bandwidth available at each level. And, it also supports AES 256, TCG Opal and Pyrite security options.

Overall, the change of controller and the lack of other significant modifications looks increasingly like an optimisation exercise rather than an enhancement revamp.

The endurance offered by the SN750 SE is identical to that previously available with the SN750 at the same capacities. Depending on how hard you work a machine, these numbers are either fine or too low for any give drive size.

If you don’t edit 4K video regularly, then 300TB on the 500GB capacity is probably acceptable, but the 200TB offered by the 250GB drive is on the border of what I’d be comfortable running.

For those wanting the best TBW numbers, the 2TB and 4TB drives only possible with original SN750 parts are the direction to go, excluding all the SN750 SE options.

The performance of the SN750 SE (1TB model tested) is much like that of the drive it replaces. However, it’s stronger in a few places and weaker elsewhere.

Western Digitial’s quoted speed of the 1TB review sample is 3,600MB/s reads, and 2,800MB/s writes, and those are almost exactly the numbers I got under CrystalDiskMark 8.0.4 with default settings.

Compared to the original SN750 1TB design, the sequential reading is faster, but the writing peak is noticeably less. If you use your NVMe SSD to boot the OS, launch apps and games, then you might find the SE marginally faster. Though less desirable if you often perform write operations.

As with all NVMe drives, I don’t just take one benchmark as gospel, and tested this on at least five different benchmark applications.

The one that came up with the most curious result was AS SSD in its Compression Test. Typically this produces a graph that spans total capacity, where the read and write performance usually tracks a similar profile at different levels. But with the SN750 SE, reading started at its peak and declined over the range, and writing did the complete opposite, starting low and climbing.

The writing graph line was also rather jerky like it kept having to adjust buffer sizes on the fly for the demands being made on it by the test. This isn’t a profile I’ve seen elsewhere and may be tied to the DRAM-less Phsion controller.

I tested the 1TB model, seeing the SN750 SE at its best. The smaller sizes highlight the differences between this stick and the older one, even by Western Digital’s own quoted speeds.

That reduction in performance is proportionally less at 500GB, but it’s far from insignificant.

The obvious conclusion is that if you only need 256GB or 500GB, it might be better to find the SN750 and only go for the SE if you specifically want the 1TB model.

Those that want 2TB or 4TB have no choice but to remain old-school, as there are no SE models at these sizes. I’d classify the performance of the 1TB drive as good for a PCIe 3.0 NVMe drive, but not exceptional.

Western Digital has only three capacities of SN750 SE available compared with the five sizes that the SN750 came in. These are 250GB, 500GB and 1TB.

It’s also worth mentioning that customers in the USA get a better deal on this drive than those in Europe when exchange rates are taken into account. As a bonus, some retailers bundle the SSD with a Battlefield 2042 PC game code.

This pricing makes the SN750 SE marginally less than the SN750 at the same capacity, although the SN750 is also available with a heatsink making the difference greater.

One of many blots on this landscape is the current pricing of the Samsung 980 NVMe 1TB, at under £120 ( US$120) from Amazon. That pricing makes it significantly cheaper than the SN750 SE, and it has an even better specification.

But, it is possible to get a drive with similar performance for closer to £110 (US$115) from a known brand and even cheaper from a lower profile name.

What should be an even greater concern for Wester Digital is that the SN750 SE is undercut by its own products, like the SanDisk SDSSDXPM2-1T00-G25 Extreme PRO.

Not sure which SSD to buy? Check our best SSDs chart with 10 great options and buying advice.

What’s special about the 750 SE then? Well, it is categorically not sequential writing, especially on the smaller capacity drives.

When a company launches a ‘special edition’ that in some aspects is slower than the standard model, it will confuse customers. That said, in some places like sequential reading, it is a little faster, creating a mixed message of sorts.

There is one place that all three capacities beat its predecessor, and that is price. Maybe five or ten dollars isn’t a huge deal, but for those working on a tight budget or buying storage for tens of computers, it might be significant.

In short, WD worked out that not allocating engineering resources to designing NVMe controllers and using a Phsion component enabled the SN750 to be made more cheaply. And, they passed some of those savings on to you, the customer.

But did they pass on enough of these savings? Compared with Western Digital’s cheaper alternative parts sold through its SanDisk brand, the answer is no.

Due to the pandemic, component prices and availability are all over the place, and they’re unlikely to return to any form of normality for some time. However, Western Digital is being undercut on price by brands that don’t make NAND Flash in-house, confusingly.

Whatever the pricing logic here, hopefully, retail adjustments will make the SN750 SE a more compelling purchase for those that want affordable storage.