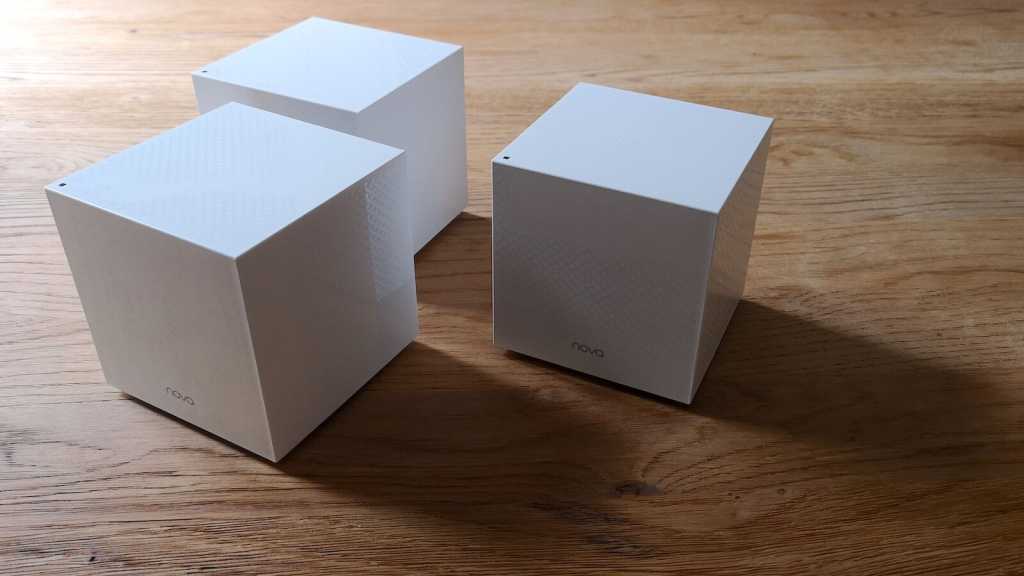 The Tenda Nova MW12 is a good mesh Wi-Fi solution, providing serviceable speeds and whole-home coverage. It’s only really good value if you can pick it up with a hefty discount as Amazon’s Eero 6, with Wi-Fi 6, is the same price.

The Nova MW12 is the latest mesh Wi-Fi solution for home buyers from Tenda, aiming to improve your network signal and speed around the house.

Like the previous Nova MW3 and Nova MW6 systems, the Nova MW12 is a little bit cheaper than your average whole-home Wi-Fi system, which sees it competing with the likes of Amazon’s Eero, and more recently the Eero 6, as well as Netgear’s new Orbi RBK352 and Nighthawk Mesh WiFi 6 systems, and the TP-Link Deco X60.

Like a lot of mesh Wi-Fi systems, the Nova MW12 system is designed to be easily expandable, so if three satellites aren’t quite doing the trick, then picking up a fourth and adding that to your existing mesh network is easy. Likewise, if three satellites is overkill, you can save a bit of money by picking up a 2-pack. You can have any number from one to 15 in one MW12 mesh network, according to Tenda.

The Tenda Nova MW12 is a ‘tri-band’ system, which means it will use the usual 2.4GHz and 5GHz radio frequencies to connect your phones, tablets, and laptops to the Internet, while the satellites communicate and route traffic across your home via a third, dedicated 5GHz channel.

As you move between rooms with your devices, the system will automatically determine which of the nodes you’re closest to, and dynamically reconnect your devices to the nearest node, and on the fastest, least congested radio band.

That’s the basics, anyway. I took the Tenda Nova MW12 for a test drive to see what else it has to offer.

The Tenda Nova MW12 cubes are lightweight, take up little space, and yet still manage to accommodate three Gigabit Ethernet ports each (one WAN/LAN and two LAN). This means if you want to use a wired connection for TV set-top boxes, games consoles or desktop PCs, you can.

There’s a little cutaway section at the base of each Nova MW12 which allows access to the ports. While it might look like there’s only enough headroom for those super-flat, tagliatelle-style Ethernet cables, you can, just about, fit standard sized RJ45 cables in there.

Note that Ethernet backhaul is not supported here. This is something that’ll be of interest to buyers who want to be able to link their devices using a dedicated, wired connection, allowing for more robust performance. The very recently-announced Tenda Nova EX6 and Nova MX6’s do support this, as does the TP-Link Deco X60, so if that’s something that’s required for your home, you should turn your attention towards those.

For most buyers, the wireless backhaul ought to be strong enough to allow the Nova MW12 units to communicate with each other without assistance.

Setting up a three-piece Nova MW12 system is very easy indeed, thanks to the easy to follow instructions on the Tenda WiFi app (iOS, Android).

As with any mesh Wi-Fi system, it’s a case of connecting the first device to your modem via Ethernet, and turning the modem off and back on again to set up that initial connection. Once that’s done, you can then begin setting up the other satellites, or nodes, as Tenda calls them.

This is made easy thanks to the clear instructions on the app, and thanks to the little status LEDs on the bottom left corner. These will glow green if you’ve picked a good spot, and yellow if a connection between the satellites has been established, but it’s not very strong. The lights and the app will keep prompting you until you’ve picked a good spot for everything. It doesn’t work terribly well through walls, so think about where you’ll need to set everything up first of all.

When that’s all done, you’ll be greeted with something like this when you open up the Tenda WiFi app:

By default, everything is named ‘primary node’ and ‘secondary node’, but you can assign your own names to the nodes, to make it easier to find which devices are connected in which rooms. As well as picking from a list of common names like ‘living room’, ‘kitchen’, ‘bedroom’ and so on, you can also enter custom names, so if your house happens to have a library, billiard room, and ballroom as well, you’re in luck.

You can rename individual devices as they appear on the network too (e.g. ‘Tom’s Nintendo Switch’), and also assign a label to each device (e.g. ‘Son’s Console’). Often, mobile phones, tablets, and laptops appear as a nondescript-looking bunch of letters and numbers, so you might appreciate the ability to personalise the layout of your home network.

Labelling everything also makes it easier to enable the parental control feature, which parents can use to enable a period of inaccessibility, should they wish to enforce some screen downtime.

I say parental control feature, because that’s all you get in the way of parental controls on the Tenda Nova MW12 – there’s only one. For greater control, you’re better off looking at dedicated security software – read the Best Antivirus round-up for the latest on this – as well as guides to setting up parental controls on Windows, iOS, and Android.

Other common but welcome features include Guest Wi-Fi, which lets you set up a second Wi-Fi network with a separate password to your regular one, for a limited amount of time, and port forwarding, should you want to be able to let people access an FTP server you’re hosting.

There’s a QoS (Quality of Service) tool, which aims to prioritise certain types of traffic, such as gaming, and media streams, but it’s not configurable – it’s literally an on/off toggle control.

There’s also a feature called Fast Roaming, which is designed to stop things like video calls and streams from disconnecting when devices move between nodes, hopping off of one Wi-Fi connection and on to another.

Capacity-Oriented Mode can be toggled when you have over more than 30 devices connected to your home network at any one time, in theory allowing for better provisioning of available bandwidth. This can’t be enabled if you have fewer than 30 devices using the network at once, and as I didn’t have that many devices to hand at the time, I can’t comment on how well this works.

Finally, there’s some limited support for Alexa, too. You can add this Tenda Alexa Skill to your account and have it do things like turn on Guest WiFi, or remind you of your password, although I actually struggled to do this a lot of the time, with Alexa sometimes thinking I wanted help with a Netgear device instead. I’m chalking this up to Alexa not understanding me more than anything else.

The Tenda Nova MW12 has top theoretical wireless speeds of 300Mbps on the 2.4GHz band and 867Mbps on the 5GHz.

While I’d occasionally approach those top speeds on both frequencies, in reality, the speeds I’d get around my home were a bit slower. Not slow enough that I couldn’t easily stream music and video anywhere in the house, but the performance was a little under the advertised headline speed.

I tested the Nova MW12 out in a terraced house in South London, with the primary device connected to a Virgin Media Super Hub 3 acting as a modem in the living room, the secondary device installed in the kitchen roughly 12m away. The third hub was set up in the upstairs office, one storey up and roughly 5m away from where the kitchen satellite was installed.

I ran a series of speed tests on an Android phone with a Wi-Fi 5 antenna (a Huawei Mate 10 Pro) with the Wi-Fi Speed Test Pro app to demonstrate the kinds of real-world speeds you can expect to get from this. For comparison, I ran the same tests in the same locations while connected to a Virgin Media Super Hub 3, to show the benefits of using a multi-device whole-home mesh Wi-Fi system instead of a single router.

The results below are averages:

Speed-wise, this is pretty much in line with what I expected from a Wi-Fi 5 mesh system. Though the results make it look like the Super Hub 3 (also a dual-band Wi-Fi 5 device) is better in some tests, there’s not much in it, to be honest. I’ve recorded lower speeds from the Super Hub 3 before.

In terms of day-to-day use, the Nova MW12 was also generally good at handing over – keeping devices connected to the internet as I moved around the house, reconnecting to different satellites as I did. As mentioned at the top, you can create a mesh with up to 15 nodes.

I did encounter a situation where the Nova MW12 software insisted on keeping one device, an HP Elitebook 850 G7, connected to the kitchen satellite, even when I was working upstairs. This made for a severely flaky connection, as it’d hop between the kitchen satellite, and the office satellite, which made getting any work done on the HP impossible. Even with Fast Roaming turned on, I would still encounter the same problem.

Strangely, none of the other devices in the office – a Huawei Mate 10 Pro, an Oppo Find X3 Pro, and an old MacBook Pro laptop – suffered from this, so it could be an issue specific to that HP laptop.

It’s possible that this was a teething issue – both the Eero and Eero 6 exhibited similar behaviour in the first few days of use, but eventually smoothed everything out. If this is a widespread issue, and not specific to the devices, it’s something that Tenda can iron out with a future firmware update.

The Tenda Nova MW12 is available to buy now.

If both of those places are out of stock, then your best bet is Walmart, which sells the Tenda Nova 3-pack for the standard US$214.99.

At the time of writing, no vendors in the US were selling single Tenda Nova MW12’s or 2-device packs.

Check our best mesh Wi-Fi systems chart to see what other options you have.

The Tenda Nova MW12 is easy to use and provides good whole-home coverage. It’s not the most cutting-edge solution out there, and so if you have a need for speed, this is not for you.

Having two LAN ports on each node could be very useful, but it’s a shame the MW12 doesn’t have more parental controls.

Price-wise, it’s undercut somewhat by the Eero 6, which offers similar functionality along with faster Wi-Fi speeds and other Wi-Fi 6 benefits for the same kind of money, making the Tenda harder to recommend unless you find it at discounted prices.