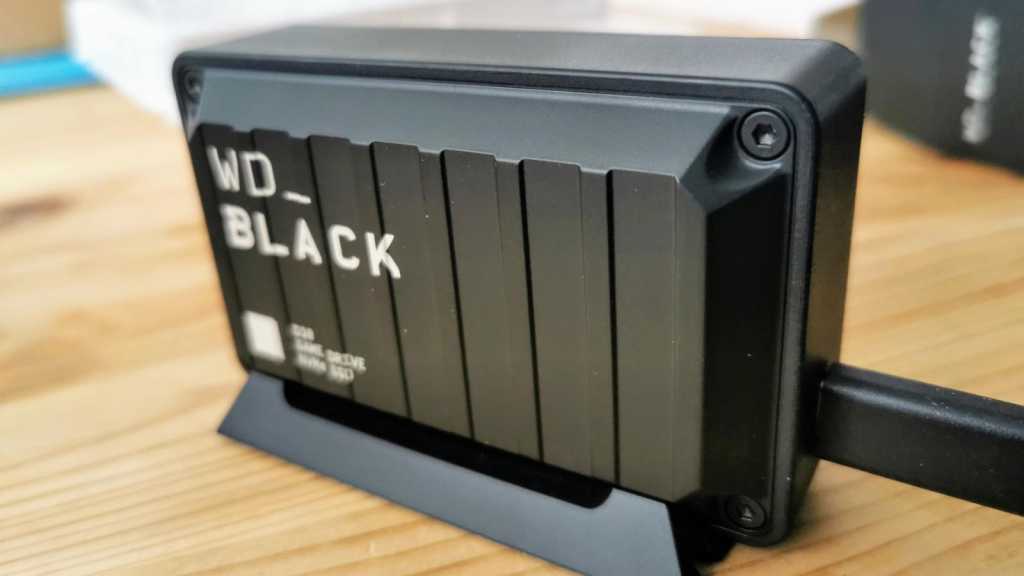 The D30 is a solid enough external SSD and is ready to go from the box for a range of tasks. A short cable is annoying and console owners, as per other drives, will have to be ok with storing and not launching games.

Western Digital has entered a slightly odd period as a creator of external storage, where it makes many drives under the three tentpole brands of WD, SanDisk and G-Technology.

What confuses reviewers and customers alike is that often these devices compete with each other, along with those brands not owned by Western Digital.

As part of a potential solution, the company has been focusing some storage niches towards specific sub-brands, like the gaming orientated WD_Black devices. We’ve got our hands on the latest WD Black SSD, the D30, designed for PC and console gamers that need extra storage that performs like an internal SSD.

Is there anything genuinely special about the WD_Black D30, or it is a by-the-numbers external USB SDD with a cosplay makeover?

Depending on how you view the WD_Black aesthetic, this might evoke the do-anything attitude of military equipment trunks or remind you of a repurposed shipping container.

I’m not sure where I fall in that spectrum, but for those who like it, the small size of the D30 does make it more charming than the larger D10 model.

Along with the drive are some installation notes, a single 20cm cable that is USB-A at one end and USB-C at the other. A small plastic foot attaches to make the drive stand upright. It is perfectly stable on its side without any support, but users with limited space might find it useful.

The cable is doubly disappointing in that it is remarkably short, especially for those using it with a desktop PC, and no USB-C to USB-C option included. Most external SSDs usually include an adapter or dual function cable, but Western Digital chose not to.

The drive comes exFAT pre-formatted, making it ready to use with a wide range of systems and games consoles. Those with Apple Mac systems or Linux can easily reformat it to an appropriate structure if required.

The quality of construction is good but not exceptional, and it is not as robustly made as a Crucial X8 or any of the G-Technology drives.

As the D30 is inherently another WD external drive that might be used by PC owners for numerous tasks, the reasonable expectation might be that the owner would be directed to get the same utilities that Western Digital provides with the My Passport series.

The documentation provided and the box doesn’t mention either, but those who go looking for support at wd.com will find that Acronis True Image is available for both PC and Mac to use with the D30. But, WD Security and WD Drive Utilities aren’t offered at this time. Hopefully, that will change in the future.

No mention is made of hardware encryption in any documentation, which begs the obvious question.

A deeper dive into the various IDs that this hardware generates when connected to a PC revealed the SSD hardware inside has the designation ‘SanDisk SDSSDXPS960G SCSI Disk Device’. That indicates that this is the same technology used in the SATA SanDisk Extreme Pro drives, and in the original version of that device, it didn’t offer encryption.

It does have a flashing LED that indicates activity, but in terms of features, there aren’t any more to talk about here. However, it is important to talk about compatibility, especially if you’re going to use the D30 with a next-gen console.

Anyone with a PS5 can store and launch PS4 games from this device, as they can from any external USB drive, but they can’t run PS5 titles from it. With a recent update, you can now put PS5 games on the D30, freeing space on the internal storage for other games to live, and move them back to play later, but that’s not what PS5 owners want, is it?

Unless both of these console makers become more attuned to their customers, perhaps enabling a test that an external drive can perform to prove it’s fast enough to be used to hold launchable titles, then the D30 (and others) is just a console themed external drive.

For PC owners, more cost-effective solutions are available, and for those with Thunderbolt ports, even higher levels of performance are possible. And the previously mentioned console restrictions on where titles can be stored generally don’t apply.

Benchmarking USB SSD drives isn’t without a few critical caveats since to get the maximum speeds available requires the correct port on a system that can fully resource that interface.

For the D30 1TB in my tests, the optimal port is USB 3.2 Gen 2, an interface that enables a maximum of 10Gbps transfers, or 1200MB/s in alternative currency.

Due to the vagaries of USB, error correction, and the background tasks that run on any computer, a more realistic transfer speed is somewhere between 850MB/s and 1050MB/s. And, WD quotes 900MB/s without saying if that’s for reading or writing.

Interestingly I noticed in testing that the D30 is better at writing than reading, hinting that the cache is biased towards write operations. That makes sense, as disconnection during a write could corrupt the drive, where the consequences during a read are much less hazardous.

Looking at the broader range of tests I ran, probably the most representative of overall performance is CrystalDiskMark with default settings, where read performance was 597MB/s and write 653MB/s.

Peak performance was a more impressive 934MB/s reads, and 838MB/s writes, but these high levels can’t be sustained over large file operations. For those with only USB 3.2 Gen 1 ports, a bandwidth capped ceiling of around 500MB/s should be expected.

You can buy it direct from WD as well as Amazon, while Ebuyer says it’s coming soon. In the US, it’s on WD, Amazon, Newegg and BestBuy.

Those prices make the larger capacities proportionally cheaper per GB, and the 500GB the least cost-effective purchase. Though, if extra space is your only concern, and not speed, the WD_Black D10 with 8TB for £214.95/US$259.99 is dramatically cheaper per GB.

When compared with other USB 3.2 Gen 2 drives, it’s also on the expensive side. Currently, the excellent Crucial X8 1TB sells for £128.39/US$134.99), direct from the makers, but can be found cheaper with online retailers.

Alternatives with similar performance levels but sharper pricing include the Samsung T5 and SanDisk Extreme Portable SSD (also made by Western Digital). And, at a similar price point is the Sabrent Rocket Pro.

Not sure what to buy? Check out our chart of the best portable hard drives and SSDs.

The D30 is a good product that provides much-needed external storage that operates at the top end of what USB 3.2 can do, without resorting to uncommon technologies like USB 3.2 Gen 2×2.

It’s highly portable, has unique styling, and comes ready to be deployed. However, some of its potential value has been royally undermined by both Sony and Microsoft, at least for console owners.

So PS5 and Xbox Series X/S owners will have to be ok with simply storing games here rather than launching them. Although, note this isn’t WD’s fault and is the same for rival drives.

The D30 has more potential for PC users, although regardless of what you’re plugging it into, a longer cable would be much appreciated along with a USB-C to USB-C option as well.