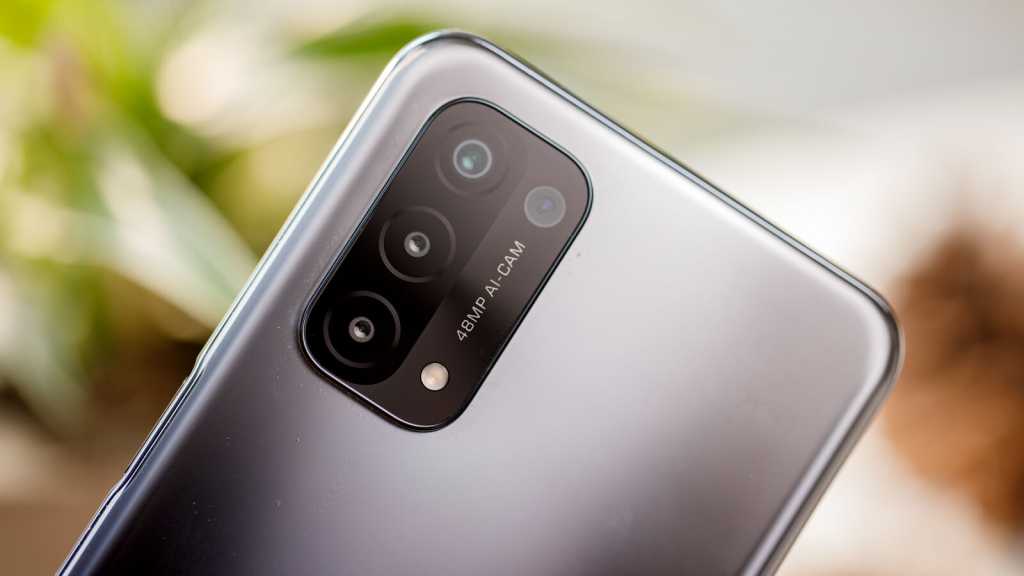 The Oppo A54 5G is a joy to use, with a long-lasting battery, a smooth display and 5G. You can get better value with 4G alternatives, but Oppo’s handset is easy enough to recommend if you’re bent on 5G on a budget.

Oppo’s 5G upgrade to the A54 also brings with it a sharper, more vibrant display and better cameras. While that adds a slightly higher price, it still remains affordable at £219. But where exactly does Oppo compromise to keep the price so low?

We tested out the handset to see how it performs day to day, and whether its humble price tag offers enough value to cut through the crowd.

The A54 5G may be a budget all-plastic handset, but it doesn’t look cheap. The model I tested in Fluid Black has a gorgeous iridescent finish that changes from dark grey to silver depending on the angle of the light. You can pick it up in an eye-catching Fantastic Purple too.

The only downside is it’s not quite fingerprint-proof. Thankfully, Oppo provides a clear case in the box, so you can show off its vibrant splendour while keeping off smudges.

The A54 5G benefits from a thin 8.4mm profile bound by a rounded matte metallic band. This adds a touch of finesse that you wouldn’t expect in a budget handset – and it’s certainly unlike anything I’ve encountered in the budget Moto G series phones I’ve reviewed, which sit in a similar price bracket.

At 190g, the A54 5G is comfortable to hold with a well-placed, side-mounted fingerprint reader, which doubles as the power and wake button. The fingerprint reader isn’t the most accurate, and often took me a few attempts to unlock the phone, but alternatives such as facial recognition and the good ol’ PIN pad means it’s not much of an issue.

As for connectivity, 5G aside, the A54 5G offers a USB-C port for charging (10W charger included), Bluetooth 5.1 and a 3.5mm headphone jack. It’s also dual-SIM (which was particularly handy in helping me get free WiFi on the London Underground).

The Oppo 54 5G offers a stunning 90Hz display with the full DCI-P3 colour gamut (note: you also have the choice to switch to 60Hz but there’s little reason to, given the handset’s robust battery life – more on this later). The novelty of 90Hz may not be as thrilling as it was a couple of years ago, but it’s still nice to see on a budget device.

Images and videos look sleek and vibrant, whether you’re streaming YouTube, watching films on Netflix or simply scrolling Instagram. It’s bright too, reaching a maximum of 398nits in our real-world tests.

The A54 5G offers an LTPS IPS LCD. In English, if you’re after the clarity, contrast and colour afforded to you by AMOLED panels, you’ll have to look elsewhere. The Xiaomi Redmi Note 10 Pro is one such alternative that manages to squeeze in a 120Hz AMOLED for £249, though without 5G connectivity. Oppo strikes a good balance offering 5G on a budget while maintaining a decent display experience, though.

In the fewest words: the A54 5G’s cameras are “okay”; nothing fantastic, nothing terrible.

What I like most about images on the A54 5G is that colours look bright and vibrant, so long as scenes are well lit.

It’s a slightly different story in low light, however, where the vibrancy washes out. Images aren’t as sharp and well defined as they could be either, with slight distortions and blurring, along with a lack of dynamic range that makes shots appear flat or weirdly abstracted from reality.

The lack of dynamic range becomes a bigger issue when using the 16Mp selfie camera, and more so if you’re in a dimly lit place like a pub or music venue.

If that’s a dealbreaker for you, you may be better off with the mid-range Google Pixel 4a, which remains one of best camera phones on the market, despite it’s mid-range standing.

While a humble price and decent display are welcome, how does the Oppo A54 5G perform?

Running on the entry-level Snapdragon 480 5G chip, it’s not quite a beast in performance, particularly if you’re an avid gamer, but it is a solid choice for day-to-day performance. Gamers can see the best gaming phones here.

Memory specs are restricted to 4GB RAM and 64GB storage, and the latter may not last long if you take lots of pictures. You can add a microSD card if you need more space, though.

If you’re comparing like for like (budget 5G phone with a Snapdragon 480 5G chip) then the A54 5G is the clear choice against Nokia alternatives. If you’re open to 4G contenders, however, then you can quite easily get better value elsewhere, such as in the Poco X3 Pro – the current king of budget handsets. For £10 more than the A54 5G, the X3 Pro packs incredible, near-flagship performance (thanks to its Snapdragon 860 chip), a large 120Hz display and impressive battery life.

In using the A54 5G over a couple of months, I found its performance to be consistently smooth for the most part. Apps launched and closed reasonably fast and switching from one app to another was effortless too.

You can see the limitations of the 4GB RAM if you have too many apps open, however. There were a couple of times when the drop-down message notifications from Whatsapp became unresponsive and would overlap with whatever else I had open. I needed to lock and unlock my screen again to remove it. Apart from this, the Oppo 54 5G leaves little to complain about.

The Oppo A54 5G runs on a reskinned Android 11 called ColorOS. It once detracted heavily from the near-stock Android experience you would have been likely to find on equivalent Nexus/Pixel or Motorola phones of the time but Oppo has since reined things in somewhat, for the better.

While there are certain Oppo-made apps – such as the Album or utilities such as Compass, Recorder, or Phone Manager – the only other pre-loaded apps are Google’s (Gmail, Photos and YouTube, for example). You also get the benefit of Android 11’s gestural navigation and three-finger screenshots – a feature I love on the Moto G series phones.

The battery life is one of the biggest benefits of the A54 5G. A full charge can take you through two days – of course, that depends on how rigorously you use the phone.

I primarily used Facebook, Messenger, WhatsApp and YouTube, and was easily able to get through a day and a half without charging. Fast charging is restricted to 10W though, which isn’t that fast at all, when competitors in the budget space offer anywhere from 18W to 33W, but you can at least expect the last fractions of power to last over an hour – even as charge dips beneath 10%.

Our Geekbench 4 battery test took 15 hours and 47 minutes to drain the A54 5G after a full charge, while 30 minutes of charging returned 23% – more than enough if you’re in a tight spot.

The battery saving modes on the A54 also let you squeeze more life out of those precious watts of power. You can choose to run your device as normal, but have it optimised for battery life in the background, or opt for the nuclear option, which lets you run only the most essential apps. The benefit here is that you get to choose what those apps are; so you’re not restricted to just basic texting and calls.

The Oppo A54 5G is available with 4GB RAM and 64GB storage only and costs £219/US$250. It’s available in Fluid Black or Fantastic Purple.

Availability is limited in the US but UK customers can pick up the handset SIM-free directly from Oppo or from Amazon, Carphone Warehouse, Argos and AO. On contract, it’s available from O2, Virgin, Sky and Vodafone.

It’s a competitive price for 5G, as the majority of the best budget 5G phones all cost anywhere from £100 to £200 more than the A54 5G (save for perhaps the Poco M3 Pro), but you can still get better performance and specs all round with 4G alternatives, such as those found in our rundown of  the best budget handsets on the market right now.

The Oppo A54 5G is no doubt a good phone. You get reliable performance, a solid 90Hz Full HD+ display, strong battery life and most importantly, 5G connectivity at an affordable price.

While it’s not the fastest budget phone out there, and cameras could be better, it’s perfectly fine for day-to-day social media use and browsing. Gamers may want to look elsewhere though.

If you’re looking for 5G on a budget then the A54 5G is easy to recommend – but given 5G service isn’t prevalent everywhere, your money can go farther with a similarly priced 4G alternative.