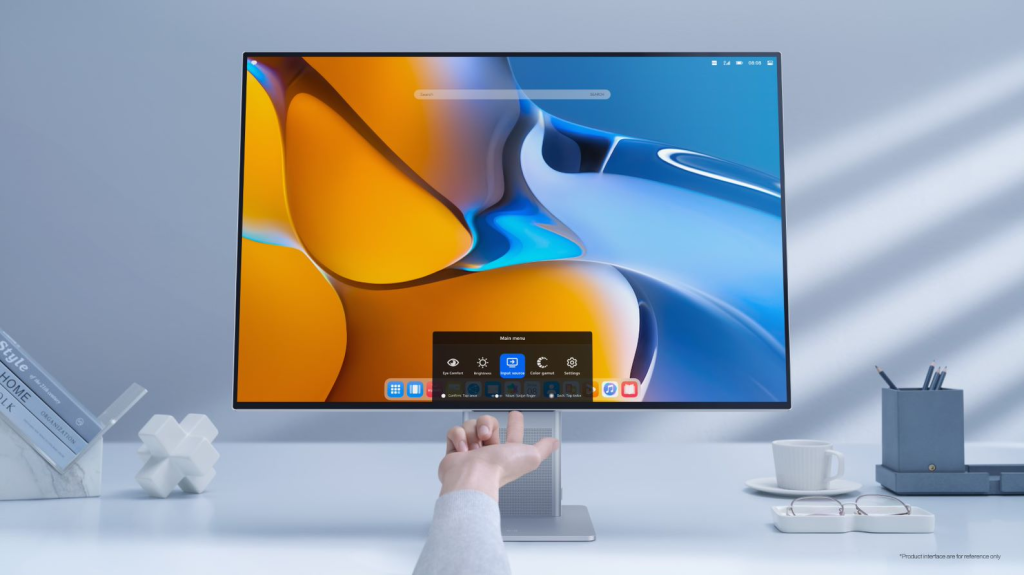 A classically styled display with many valuable features and excellent performance, but the wireless projection feature has issues.

While Huawei has created a few exciting TVs and is well known for phones, its entry into the monitor market has been much more speculative.

At the time of writing, it have just two models in the MateView series; the gaming-focused MateView GT and the regular MateView reviewed here.

The MateView is a business/high-end consumer-orientated design that promises top-end colour accuracy, and there are two models, one with the ability to use wireless inputs from other Huawei devices.

Like much of Huawei’s more exotic equipment, the MateView isn’t cheap, but it is worth the investment?

Huawei sent me the wireless capable version of the MateView along with one of its lovely MatePad 11 tablets. While this isn’t a review of the MatePad 11, this is one of the first Harmony 2.0 running devices to come from this Chinese manufacturer. That new OS was designed to make the most of the wireless display technology in the MateView, so the two go together.

Out of the box, this is a striking design that could so easily carry the Apple logo in terms of construction quality and poise. It comes pre-assembled to the stand which is handy but unfortunately, you can’t detach it and use a VESA specification stand.

Overall, while it looks great, the lack of VESA options or the ability to offer portrait mode might put a few customers off.

The support allows for some vertical movement and tilting but offers no base rotation or pivoting, sadly. To stop it from accidentally moving in transit, Huawei put a plastic brace on the slot where the screen travels, and you need to remove this to get any vertical motion.

Huawei promotional videos show the movements all accomplished with a single finger, but my experience was that some force is needed to move it up and down, as the bearings in the rail don’t smoothly rotate. This may improve over time perhaps.

At the rear of the support are three inputs that include the power (USB-C), HDMI and a mini DisplayPort. As the cables never actually connect to the display itself, no cable management was considered necessary.

Other external connections along with the power button are on the righthand edge of the support.

While I commend Huawei for using USB-C as the power connection, the PSU provided is hardwired to a European style power connector, necessitating an extra adapter (not provided) to use a UK socket.

Why Huawei didn’t use an international adapter with multiple pin options is a mystery. Hopefully, this will be sorted out once this product ships in greater volume.

What is included in the box is a USB-C to USB-C cable. That cable can connect any Android tablet or phone that can output via that port, and also in the box is a DisplayPort to MiniDP cable to connect a PC or laptop etc if you have that port.

In addition to being a display input, the USB-C also connects two USB-A ports on the support arm, providing a basic USB hub. Any mouse, keyboard or other USB peripheral connected through these ports are automatically connected to any system that connects via USB-C.

Everything about the MateView is slightly odd when compared to the majority of display products. It has an unusual aspect ratio, resolution, and even the way that the OSD is accessed isn’t familiar. The size is even the lesser spotted 28.2in.

We’re all used to 16:9 ration panels, but except for some Apple products and camera sensors, a ratio of 3:2 hasn’t been commonly used by TV, movies or any other video format. Although some laptops use it such as the Surface Laptop 4.

Most monitors use either a line of buttons or a small joystick for control. Huawei designers went entirely their own way with a curious rubberised touch panel under the centre of the screen. This device – the ‘Smart Bar’ was created to perform the job of being a menu slider control and the button to select the options, or rather that was the thinking.

Selection requires a single tap, and double taps are used to decline a choice or exit. If only it worked a simple as that sounds.

My experience was that sometimes the first tap is noticed, but occasionally it isn’t. How well this worked when it was being developed is called into question when you encounter OSD menus that inform you that to access features on that specific page requires you to connect a mouse to the monitor.

I like joysticks, and I can even play guess-the-button, but I didn’t immediately find this solution intuitive.

But the most interesting feature, and one that Huawei was keen for me to explore, is the ability to wirelessly link a mobile device to the MateView. Let’s talk about the realities of wireless projection.

A selling point of this design is that it supports OneHop Projection, or rather what Huawei has defined as being ‘wireless projection’. A detail that might be at odds with what most people might think when they read those words.

To test this technology, Huawei provided their latest MatePad 11 tablet, hardware that exclusively runs its new HarmonyOS 2.0 operating system and not Android. But initially, it refused to work even with that device.

Eventually, after some help from Huawei, I reset the MateView after establishing a Wi-Fi connection on it, and it updated to a firmware release that allowed the tablet to directly link to the screen. Clearly, without precisely the right firmware levels on both tablet and monitor, this technology won’t work.

When I first got this hardware, the inference was that it would only work with HarmonyOS devices. But that assertion turns out to be incorrect. After the firmware changes, it now works with my Huawei P30 Pro phone running Android and EMUI.

What other Android phones, made by Huawei (and its associated brand Honor), that will work I can’t test, but I’m reasonably sure it doesn’t work as globally as either Google Cast or Miracast technology.

One final twist on this story is that Huawei made this screen 3:2 ratio, but the 16:10 ratio MatePad 11 doesn’t match. Because of this discrepancy, when you project from the tablet, you end up with black borders on either side.

What’s worth pointing out is that almost any modern Android phone that uses USB-C can output its display through that will work using a USB-C cable, so that wireless projection only works with a much smaller number of devices is less of a calamity.

As this one feature increases the cost of the MateView by $110, it is worth considering that before purchasing.

The overall performance of this display is a mixed bag, with some aspects being wonderful and others dipping below the ideal levels.

Both brightness and contrast are excellent on this panel, and in testing, it got very close to achieving the 500 nits of brightness and exceeded the 1200:1 static contrast levels that Huawei quotes. However, the flip side of these numbers is that the fall-off from the centre to the edges of the screen in brightness is way too much.

Whatever brightness settings are set, the bottom right of the panel is at least 19% darker than the centre, reducing a 500 nits brightness output to closer to 400 nits. Other corners are less impacted, but all are at least 10% darker than the middle. Colour uniformity isn’t as extreme, thankfully.

The best aspect of this design is the colour representation. For a business-orientated display that isn’t specifically for colourwork, the MateView has better colour accuracy than you might expect.

Gamut scope presents reds and blues best, with only the green channel being the weaker side of this triangle. It achieves 98% of sRGB, 73% of AdobeRGB and 74% of the P3 gamut.

While the OSD doesn’t provide any means to adjust Gamma, tests showed that the factory default is on the 2.2 line almost exactly.

Overall, this is a great screen, and if Huawei could design a better backlight array for this panel, it could be truly exceptional.

Furthermore, anyone buying the MateView before 30th September can claim £200 cashback. Details can be found here.

As you could add similar functionality, plus lots more, and global support by purchasing a Chromecast with Google TV for £59.99 ($49.99), it’s hard to see how this makes any economic sense. That Huawei then restricted its use to only specific devices makes it the worst option compared with any third-party streaming stick that supports casting or Apple AirPlay transmissions.

Also, compared to an equivalent 4K display, the cost of the MateView is high, with a 28in model costing around half the price from Samsung, LG or most well-known brands.

Check out best monitor chart to see other options.

At first glance, the MateView looked something spectacular but turned out to be less than ideal in a few ways, mostly due to some intentional limitations Huawei imposed on it.

This sort of proprietary thinking might work for the likes of Apple, but when you’re trying to enter a new commercial space being flexible might have been a better strategy than the exclusive direction they chose.

For those heavily invested in Huawei equipment, then maybe the MateView is the right screen, but comparing it to simply plugging a Google Chromecast into the monitor, the integrated wireless input option comes off badly.

A more practical option might be to buy the regular MateView – as it has the same excellent colour gamut, brightness, and contrast – and add your own wireless connectivity.

But the biggest issue here is that you can buy two 4K monitors from a reputable brand for less than the price of one MateView, and those screens will probably have VESA mounting, variable sync and even HDR10 support.

For this product to make significant traction, it needs to be much cheaper and less fussy about the wireless video signals it is willing to work with.