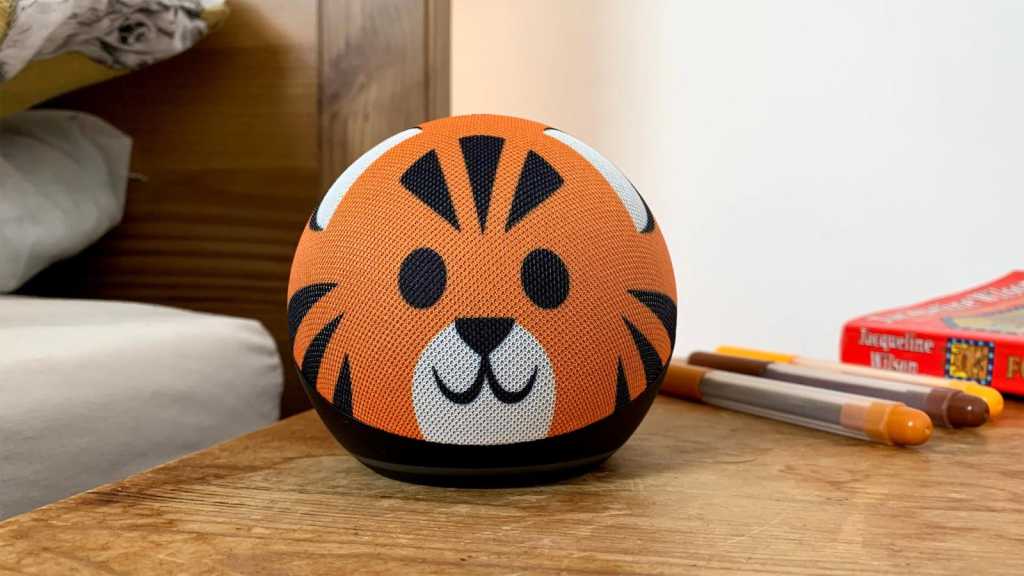 If your child is the right age (around 5-8), the Echo Dot Kids is a safe way to use Alexa and listen to music.

The Echo Dot Kids is a smart speaker designed to be safe for children to use. It’s based on the 4th-gen Echo Dot and, apart from the tiger and panda prints on the fabric, the hardware is exactly the same.

It’s £10 / $10 more expensive than the regular Echo Dot, but comes with a year’s free subscription to Amazon Kids+. Previously, in the UK at least, Kids+ was only available on Fire tablets.

Now, those elements which are audio based, can be used on an Echo speaker.

Is the Echo Dot Kids a good buy? Let’s find out.

If you’re familiar with the fourth-gen Echo Dot, that’s exactly what you’re getting here. It has the same buttons, the same speaker and microphones and the same 3.5mm audio output (which can be used for headphones).

There’s Bluetooth for streaming audio from, say, a phone, or for pairing your own Bluetooth speaker.

Via the Alexa app you can set alarms and choose kid-friendly sounds such as Olaf from Frozen, Ben 10, Baby Panda, Numberblocks and Alphablocks. Kids can tap the top to snooze the alarm, just like the standard Echo Dot.

The setup process is slightly different to the Echo Dot 4 because the Alexa app takes you through some privacy settings specific to kids, as well as activating the Kids+ subscription. 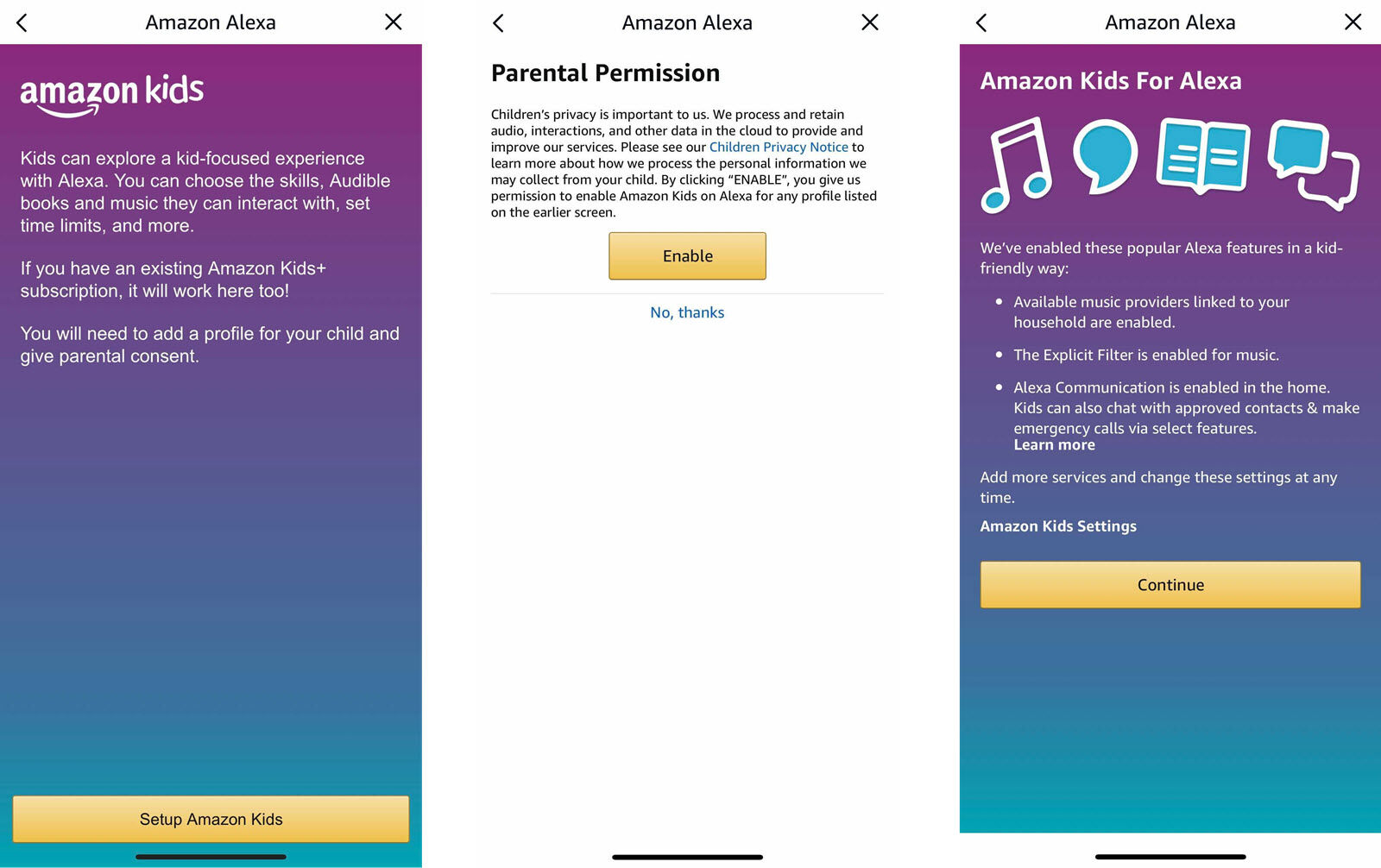 It’s really a year-long trial, and you’ll be charged monthly after 12 months if you don’t cancel it in your Amazon account.

Unlike the normal Dot, the Dot Kids has a two-year warranty that covers accidental damage.

Given the subscription and warranty, the £10 / $10 extra starts to look very reasonable indeed, though it will depend upon the age of your child as to whether they’ll really enjoy the Kids+ content.

More on that later.

On the Echo Dot Kids, Alexa is subtly different from a regular Echo. For example, she might offer more or less information when asked a question, depending upon what’s more helpful to younger ears.

Ask what’s the tallest mountain in the world, and she’ll deliver a more concise answer about how Everest is ‘highest’ but not the tallest, compared to a much more detailed (and harder to comprehend) answer on a normal Echo.

But ask how many planets are in the solar system, and she’ll list all eight (and mention Pluto being awesome), which you won’t hear on a regular Echo. 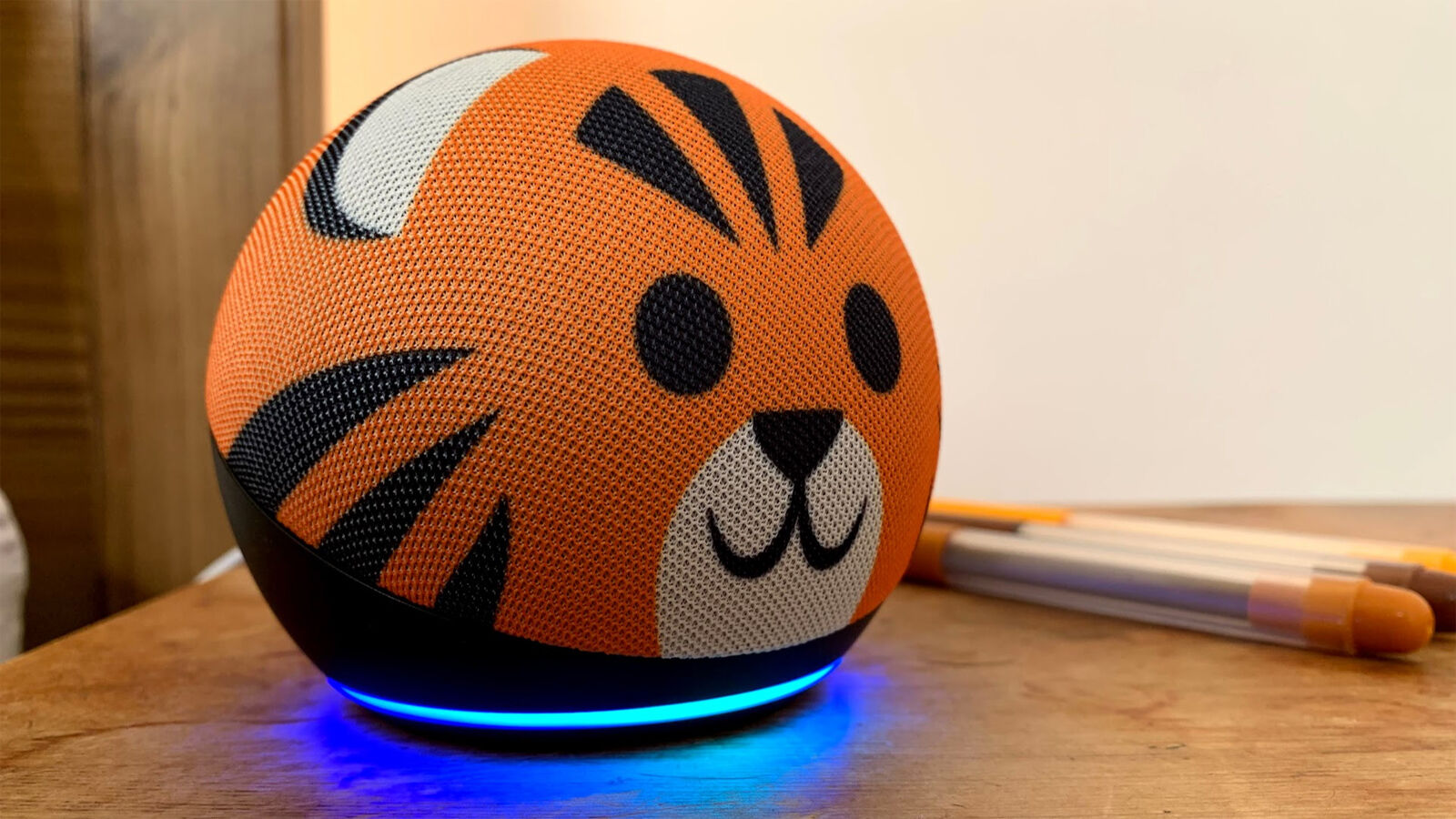 By default, music with explicit lyrics is blocked, and that’s not just if you use Amazon Music: it also works with Spotify, Apple Music (and Pandora in the US).

Although kids can talk to Alexa exactly as you can on other Echos, there are a few other phrases they can use if they don’t know how to make things happen. For example, they can say “Alexa, let’s go” or “Alexa, I’m bored”.

She’ll then suggest games to play or stories to read. Some skills can be used out of the box, while others have to be enabled in the Alexa app (just as with regular Echos).

The Kids+ subscription offers access to over 100 child-friendly audiobooks, but as the parent you’ll have to head to Amazon’s Alexa for Kids web page and click on Audible so you can suggest some books your child might like to listen to. 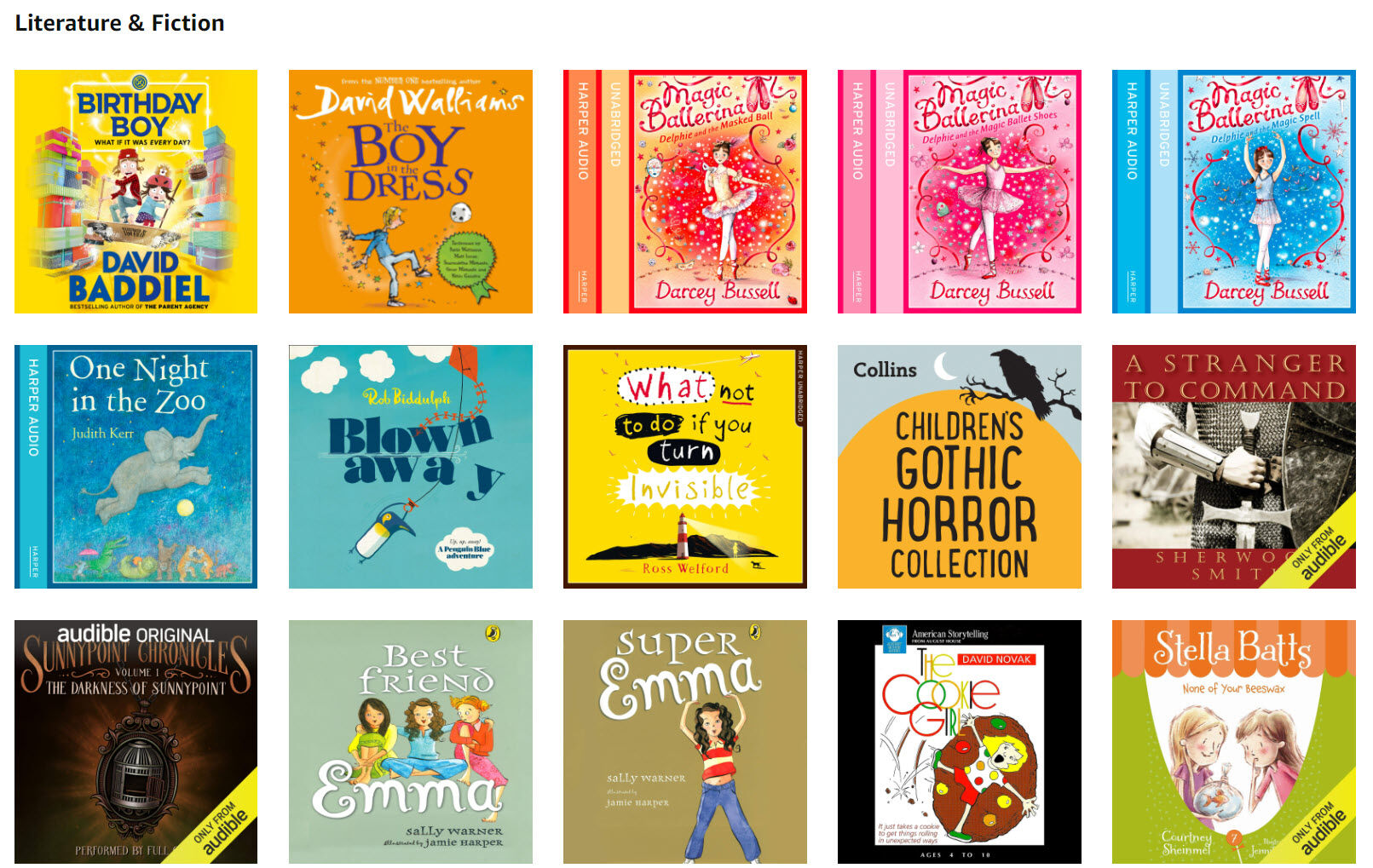 They include classics such as Five Children and It, Cinderella, Aladdin, Paddington as well as fairytales, educational titles (such as a series from Collins on our planet, incredible women in history, scientists) and fiction from David Walliams, David Baddiel and more. No Harry Potter, though.

If you subscribe to Prime, Spotify or Apple Music, kids can listen via the Echo Dot Kids, but they can also ask Alexa to play Fun Kids radio, within which there are pop, classical, classics, soundtracks, animals and party stations. They can also ask for Disney Hits, Kids’ Party, Nursery Rhymes and more.

There’s also a selection of ideas of what to ask Alexa, and you get a brief ‘Alexa Guide for Kids’ in the box as well.

But even with these, it can be hard for kids to discover much about what you can do or say with an Echo Dot Kids. Alexa isn’t particularly forthcoming with suggestions. If you do ask for a story or a game, she’ll typically offer just two. Maybe the idea is not to overwhelm with choices, but it’s not ideal for discovery.

Amazon’s Parent Dashboard, which is a web-based tool rather than an app, can be used to change settings and monitor what your child has been up to, as far as using Amazon devices goes. 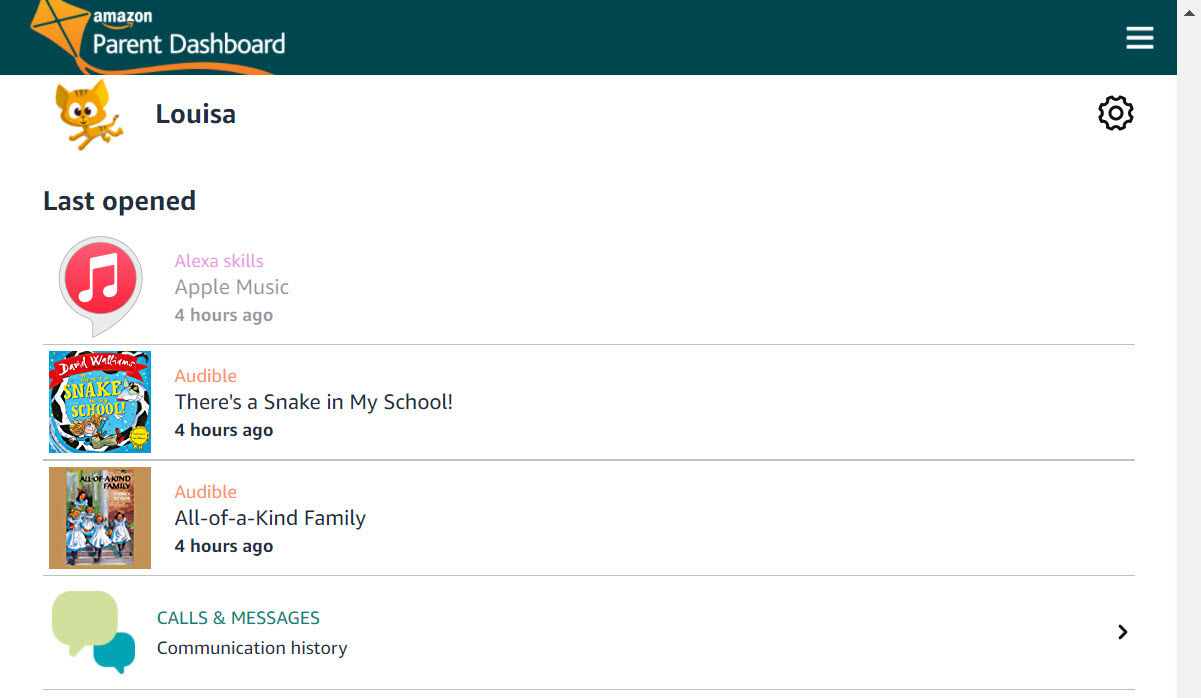 Using it, you can set a bedtime and wake-up time, and Alexa won’t ‘work’ between those times. If the kid tries, Alexa will just say “Sorry, I can’t play right now. Try again later.” 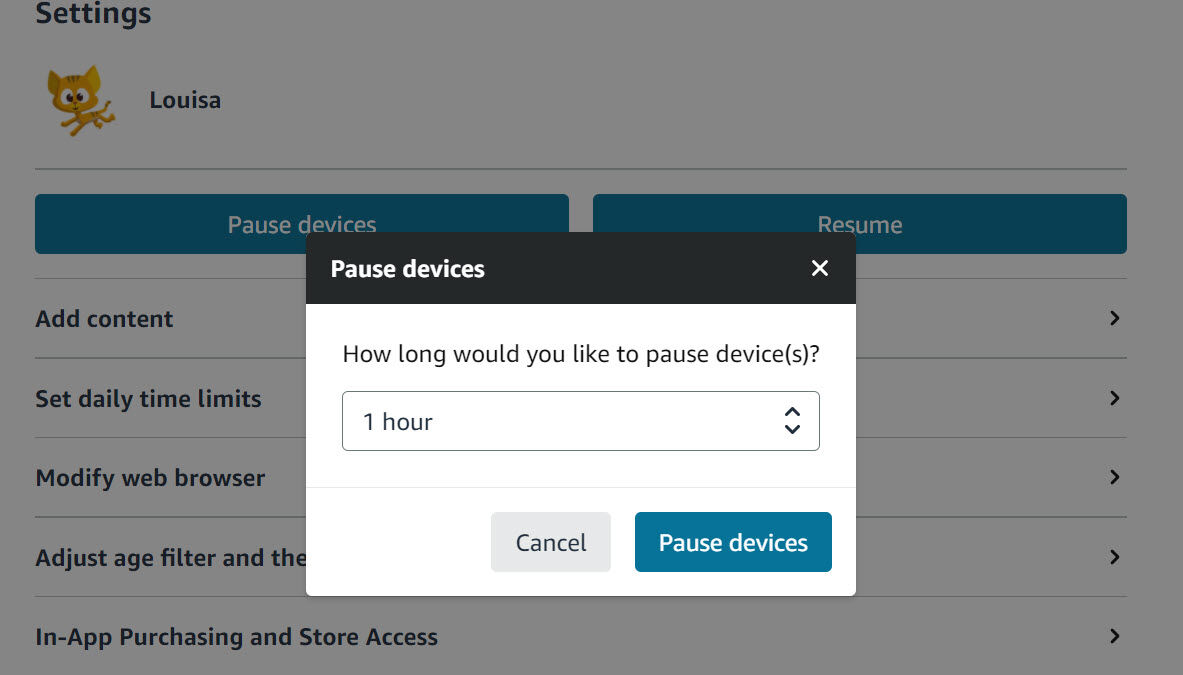 You can also pause their access (both to the Dot Kids and any Fire tablets) and prevent them from controlling smart home devices, such as lights and plugs, from the Echo Dot Kids.

By default, voice purchasing is blocked, so they can’t ask Alexa to order fidget toys or anything else from Amazon on your credit card.

The parent dashboard can be accessed from the Alexa app or directly in a web browser and as it’s based on child profiles rather than specific devices, you have to go into the profile to set a bedtime and other things.

There are only a couple of settings for the Echo Dot itself: Manage Music (where the explicit filter can be turned on or off) and Communications (where you can enable or disable calling, messaging and Drop In).

If you do enable these features, you’ll need to use the Alexa app to pick which contacts your child can call and message. For Drop In, the setting in Parent Dashboard simply determines whether other household Echo devices can Drop In on the Echo Dot Kids.

Announcements are supported, so a parent can broadcast a message to the Echo Dot Kids, and a child can make their own announcements to other Echos (but only if they know this is possible – you might want to keep that a secret!).

When your child grows up, they may not like having the animal design, but at least you can disable all the kids’ stuff and turn it into a regular Echo Dot.

You can pick the Tiger or Panda version, and neither of them have a built-in clock display like the Echo Dot with Clock model.

There are lots of other smart speakers: see our guide to the full range of Amazon Echos for more details.

When I did a quick straw poll of friends with children of a suitable age for an Echo Dot Kids, their responses were all identical: “Why does it even exist?” and “How is it different from a normal Echo?”. When the latter question was answered, most of them said that they’d still pick a normal Echo.

Some, naturally, had concerns over putting an Echo in a child’s bedroom and while Amazon says it takes privacy very seriously, it makes you work hard to understand exactly what information is stored and shared. That’s not clear even after reading the Amazon Kids on Alexa Children’s Privacy Notice that you’ll find in the Help section of the Alexa app.

Put simply, if you’re worried about data collection, an Echo Dot Kids probably isn’t for you.

The real question is whether the Echo Dot Kids is worth buying. The answer is complicated.

If you’re happy to put a smart speaker in your kid’s bedroom and they’re aged between around 5 and 8 years old, then this is probably the safest way to do so: there are few rivals to the Echo Dot Kids.

Left to their own devices, no children I know would listen to any of the educational content from Kids+, and it’s debateable whether you’d want to continue to subscribe after the free year is up.

Kids older than 8 or 9 will prefer a regular Echo Dot and, since it’ll likely be sitting on their bedside table, the Dot with Clock is a great alternative.