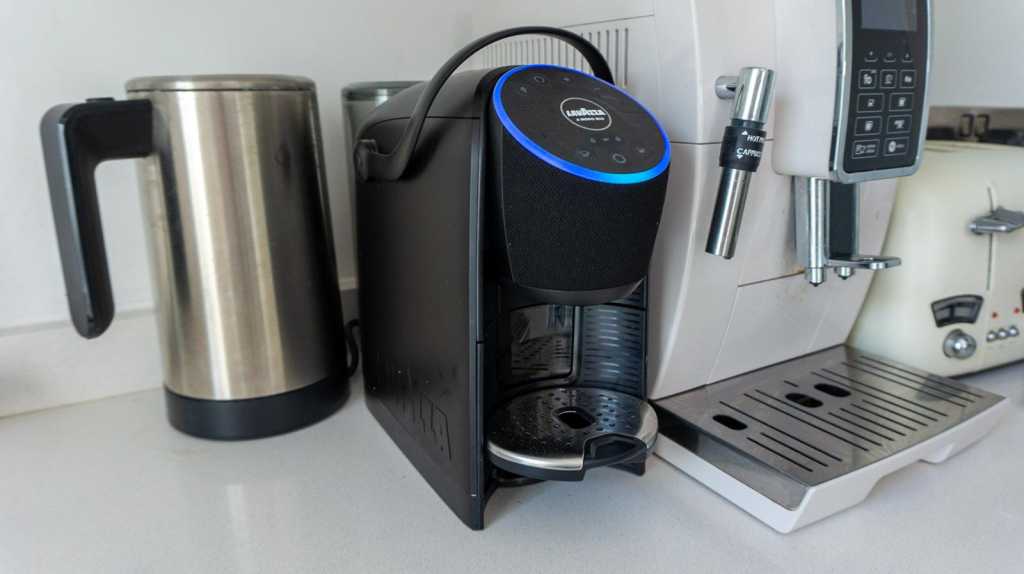 The Lavazza Voicy is a great option for current or future Alexa users looking for a space-saving way to add an Echo speaker into the kitchen and up their caffeine game. The smart features don’t really help when it comes to making coffee, but good espresso and a solid smart speaker make this a good buy – but you’re better off buying it on Lavazza’s capsule subscription offer than at the RRP.

The Lavazza Voicy isn’t the first smart coffee machine around – and it certainly won’t be the last – but it is the first I’ve tried that uses the tech in a smart enough way to justify the purchase.

The key difference is that while other smart coffee machines off an app, and maybe support for a voice assistant, the Voicy simply incorporates an entire Amazon Echo device – speaker and all – so that even if you don’t fancy making a hands-free(ish) coffee, you’re still getting the benefit of Alexa in your kitchen.

Lavazza has kept the Voicy’s design simple, and at a glance it doesn’t look dissimilar from other machines in the A Modo Mio range.

Available only in black, it’s a fairly slim machine – and thus easy to slot into spare spaces in a cramped kitchen like mine – with a cylindrical water tank that slots into the back. You can remove this entirely, but for refills its easier to simply remove the lid and pour water in from a jug.

A small drip tray at the front can sit at two heights – to best suit either an espresso cup or larger mug – while the company’s A Modo Mio capsules slot simply into a space only the machine’s top side. There you’ll also find the sturdy coated aluminium handle used to open and close the capsule chamber.

Controls are pretty simple. The power button is flanked by two coffee controls: one to make a standard espresso, and another to make a slightly longer variant. Any further caffeination options are tied to voice controls, or the accompanying Piacere Lavazza app.

That, of course, is enabled in part by the Alexa integration. In this case, there’s actually a speaker built into the front of the coffee machine. It’s about the size of an Amazon Echo Dot, with a similar black fabric mesh covering, and the easily recognisable glowing blue ring light found on many Alexa devices.

Alexa brings with it a few more controls – a mute button, an activation button if you’d rather skip saying ‘Alexa’, and volume up/down controls. That’s about it.

Maintenance and cleaning have so far proved simple, though after a week or two with the device I haven’t had to do any descaling yet. The drip tray is easy to remove and empty, and the container for discarded capsules sits behind it. Lavazza’s capsules are now compostable too, so feel a little more eco-friendly than some.

Ultimately this is a pretty compact coffee machine, and one clearly designed to fit into almost any kitchen – which is a key part of its appeal. That’s even more so if it allows you to move an Alexa device you already have, letting you both save space and consolidate your power sockets.

As a capsule coffee machine, there is an upper limit to the quality of the coffee you’re going to get from the Voicy – traditional espresso and bean-to-cup machines remain the gold standard for home use.

Still, Lavazza’s Italian heritage shines through here, and results impress. By default you’re limited to either espresso (1 fl oz) or long espresso (2 fl oz) – so far, so Italian – but with a tweaks in the app you can go up to 8.3 fl oz (245ml) in a single pour, which should fill most mugs.

Lavazza machines use the company’s own capsule range, dubbed A Modo Mio. There’s a range of more than seven varieties, most of which skew towards darker, more bitter roasts – again, very Italian – so don’t expect much in the way of fruity or more acidic finishes.

I think Lavazza’s pods are at the upper end of the market in terms of coffee quality, so long as they’re to your taste. Here they produce espresso with a respectable crema, and a flavour that lingers on the palate – if I had to complain, it would be that there can be a slight grainy texture, as if some of the more finely ground coffee grains have made it into the cup.

Unlike some other coffee machines – especially ones around this price – there are no milk features here. With no milk tank or frother this won’t help you produce lattes or cappuccinos, so you’ll have to look elsewhere if you want to practice your barista art.

Ultimately, for all the complicated smart features when it comes to coffee the Voicy is simple and to the point. It makes espresso, and it makes it pretty well.

I mentioned earlier that the Voicy isn’t the first smart coffee machine I’ve tried. Most take a pretty simply approach – they connect to an app that gives you a few basic controls and customisations, and maybe let you activate the machine using voice controls on your existing smart speaker.

This is useful to a point, but ultimately any excitement over a smart coffee machine tends to fall off as soon as you realise that you still need to make sure that there’s a capsule in the machine, water in the tank, and a cup sitting ready – forgot any one of them, and you’ll still have to get out of bed to do the job yourself.

The Voicy hasn’t solved any of those problems, and making a coffee is still a pretty manual endeavour. You can automate it to a point, but if you’re anything like me you’ll stop bothering with “Alexa, make me a coffee” and just start hitting the button yourself pretty quickly.

Where it excels is in including an actual smart speaker in the machine – essentially giving you an Echo Dot built into your coffee machine. That means that in addition to all of the smart coffee features, the Voicy does everything you’d expect an Echo device to do: looking up recipes, telling you the weather, playing music, and managing other smart home devices.

The kitchen is one of the most useful places in the house to have a smart speaker – it’s the place your hands are mostly likely to be too busy or messy to check your phone – but space is often tight and power sockets limited. Combining a smart speaker with a coffee machine is in that sense an excellent efficiency, and a lifesaver in smaller kitchens like mine.

The only downside? Since it’s limited to Alexa, this will only really appeal if you’re already an Alexa household – or are willing to become one. With no Google Assistant or Siri support, this won’t help if you’re already committed to one of those ecosystems.

Beyond the core Alexa controls, you also get the expected suite of customisation options in the official Lavazza app. In addition to tweaking the two pre-set button-based coffees, you can also create more personalised options with custom names that you can order through Alexa. Curiously this includes options for sugar and milk that the machine can’t actually help with, but Lavazza says they’re included so that you can ask Alexa for reminders on how someone else takes their coffee.

Beyond custom coffees, you can also use the app to track your remaining stock of capsules, and order more when you’re running low – or just subscribe if you prefer. It’ll also track your consumption, and similarly you can ask Alexa how many capsules you have left, or how many coffees you’ve had that day, week, or month.

One of the main ways that smart speakers are used is, well, as speakers. So while the Voicy is primarily a coffee machine, it only feels fair to also assess how well it handles itself when playing music.

By default the Voicy includes support for Amazon Music, Spotify and Deezer, and it comes with three months of free Amazon Music Unlimited included once you register the machine.

The speaker is a similar size to an Echo Dot – Amazon’s smallest Echo speakers – but while the machine was built in partnership with Amazon, there’s no suggestion that the speaker itself was built by the tech giant.

Audio quality is decent, but certainly not remarkable. Unsurprisingly, given the size, sound is a little tinny and thin, with bass power clearly the weak point, and quality dropping as it moves into the higher volume ranges.

Still, it’s a similar story with the Echo Dots, and the Voicy has the advantage that it’s all but guaranteed to be installed in a kitchen. Assuming your cooking space isn’t gargantuan the Voicy should be capable of of filling the room without you cranking it up to max, and the speaker is well suited to blasting pop songs while you prep dinner.

You actually have two different options when it comes to buying the Voicy, which is available in the UK and Europe, but at the time of writing isn’t on sale in the US.

The simplest is that you can buy it outright, which will set you back £249/€249. You can find it on Lavazza’s website or Amazon. At that price it feels expensive, more than double the price of some similar Lavazza machines, which outstrips the added value of the Alexa speaker.

You’re better off buying it as part of a coffee subscription directly from Lavazza. Buy it like this and the machine itself will cost you just £50/€49.90, so long as you commit to a subscription of 10 packs of coffee for at least eight or nine orders (this varies slightly by country).

That, to be fair, is a lot of coffee – around 160 capsules per order, for £44/€45. But if you’re intending to use the machine for a while you’ll likely hit that threshold eventually anyway – it’s not like you’re going to buy a coffee machine but never order any coffee for it.

It is also worth flagging that the same offer exists for Lavazza’s other capsule machines, though most of them are available for £1/€1. In this case you’re paying a fairly clear £49/€49 premium for Voicy’s Alexa support – not a bad deal considering that’s also how much an Echo Dot costs at full price, and here it’s integrated into the machine.

Finally – remember that other coffee machines are out there. Check out our pick of the best coffee machines we’ve reviewed for a few more options, or the best Echo speakers to see what else Amazon offers.

The Lavazza Voicy is the most convincing case yet for a smart coffee machine. Not because the smart features meaningfully help you make coffee – sadly, they still don’t – but because integrating a smart speaker into an existing kitchen appliance is a no-brainer for compact kitchens.

The coffee itself is good quality, so long as Italian roasts are up your street, and as a coffee machine the Voicy is simple, streamlined, and easy to use.

If you’d like to add an Amazon Echo to your kitchen – or have one there already that you could move somewhere else – then the Voicy makes a lot of sense.

Even so, at full price it’s tricky to justify, so either look out for a discount or go all in and commit to Lavazza’s coffee subscription for a saving.