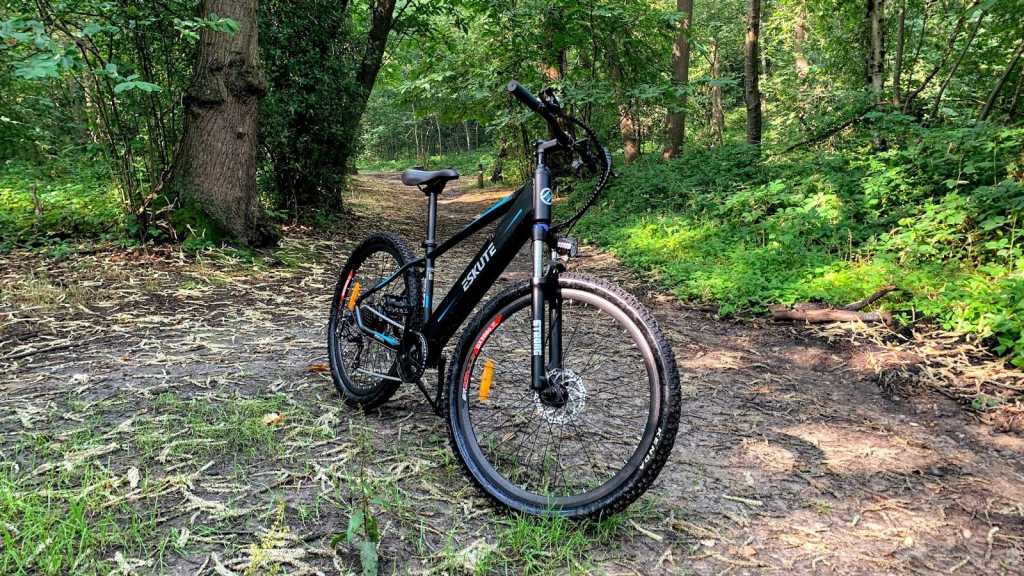 The Voyager compromises in some areas but delivers in others, resulting in a great-value electric bike for off-roading.

If you’re looking for a budget electric mountain bike, there’s a wealth of choice these days. Many models have to be ordered direct from China, but even though Eskute is based in Shenzhen like Fiido and others, it has local stock in various countries – including the UK, France and the Netherlands – which means you don’t have to wait a long time for delivery or pay import fees.

The company makes two bikes – the other is the Wayfarer – and I’m reviewing the Voyager here.

It’s a good-looking bike with a distinctive tapering top tube that – in photos at least – looks almost impossibly thin where it joins to the seat tube. 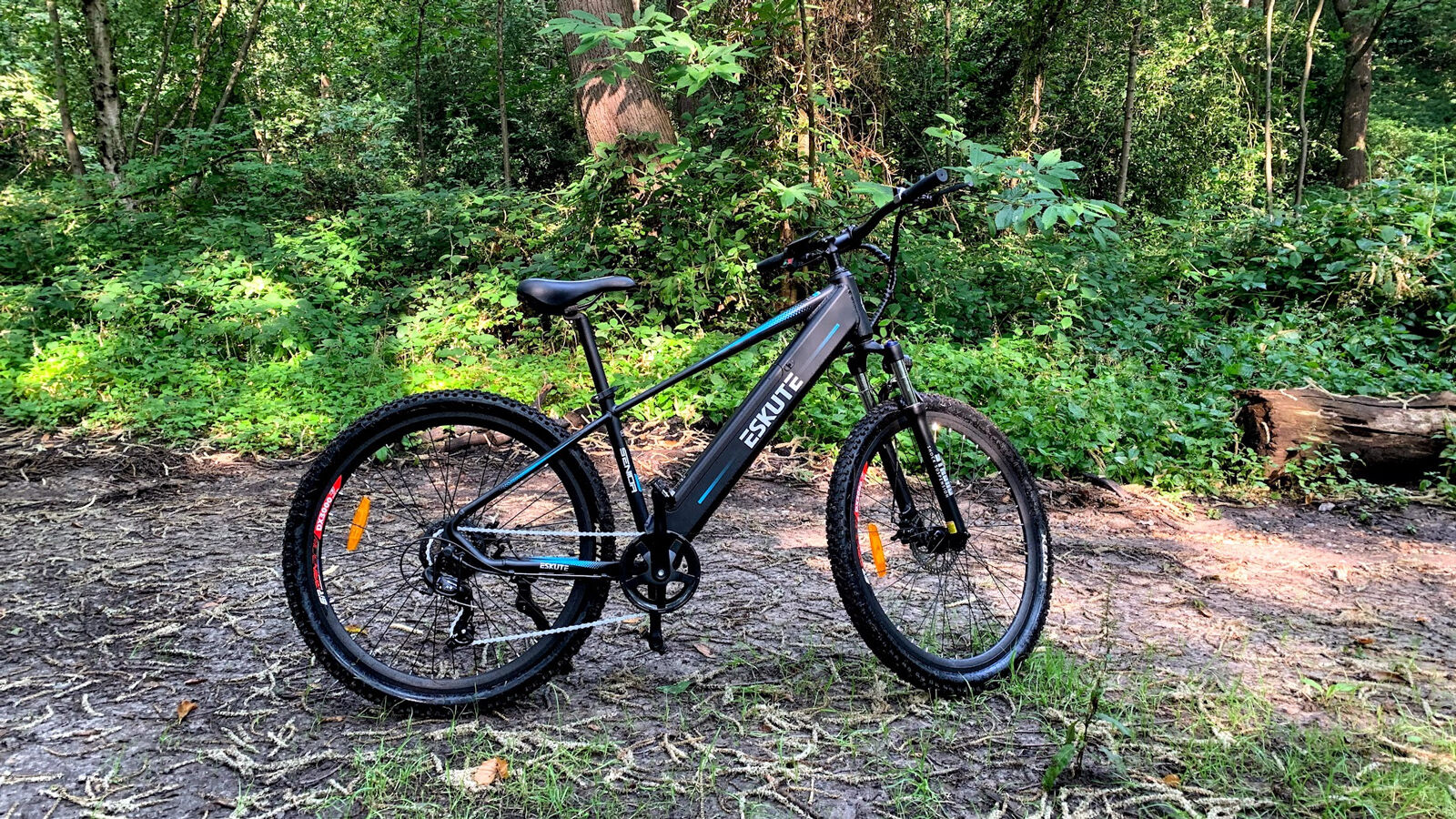 In real life it looks and feels sturdy enough, at 25kg it has a tank-like feel compared to a lightweight road bike.

It’s a hard-tail frame with an unbranded front suspension fork that has a lock-out for road riding. 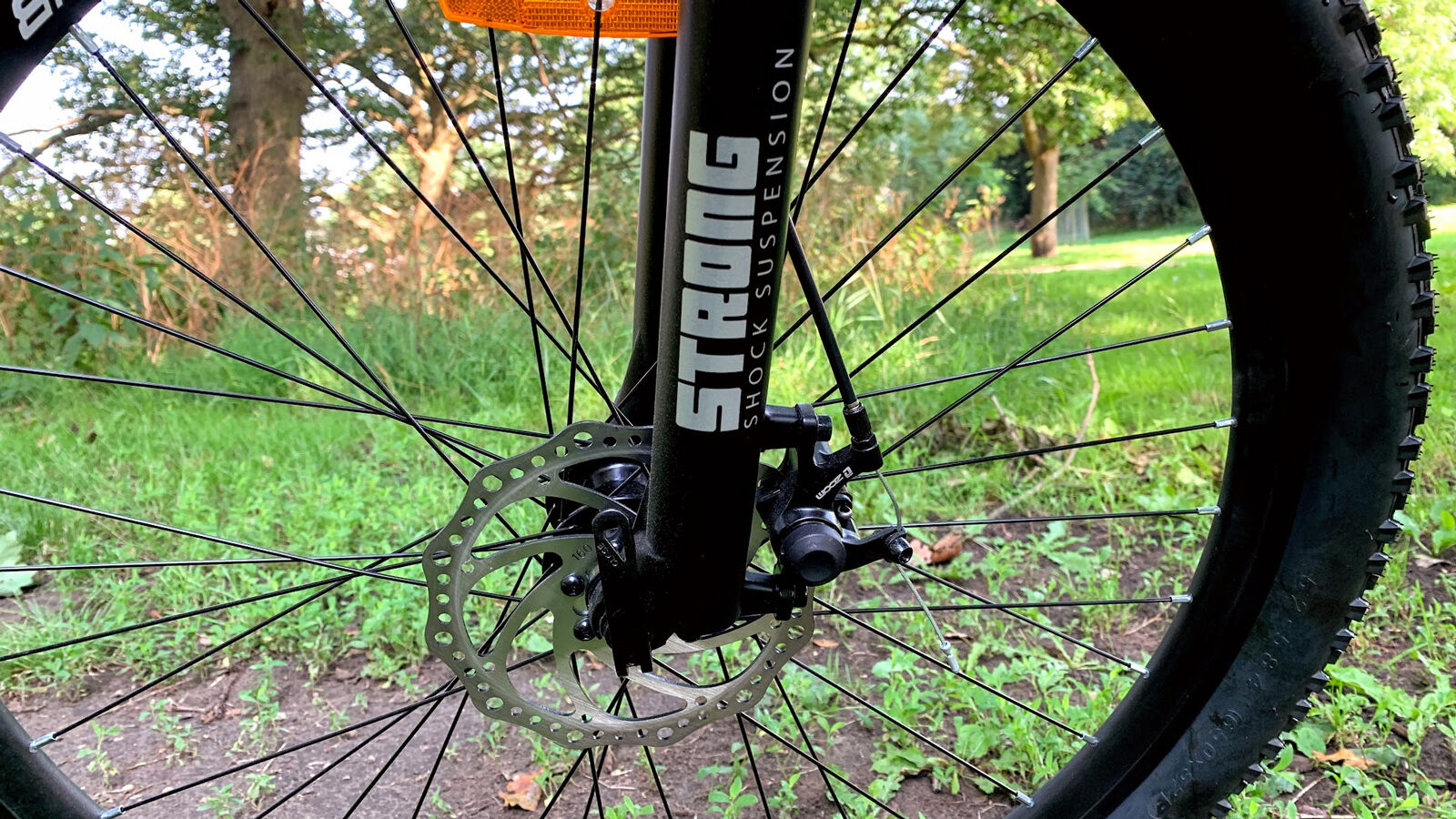 There are mechanical disc brakes: Eskute’s spec list shows these as Tektro MD-M311 brake system, but this is just the 160mm brake discs. The actuators (and presumably also the pads) are made by Zoom: the brake levers are unbranded.

There’s a KMC chain and a 7-speed cassette with Shimano Tourney rear derailleur (and a handy cage to protect it). 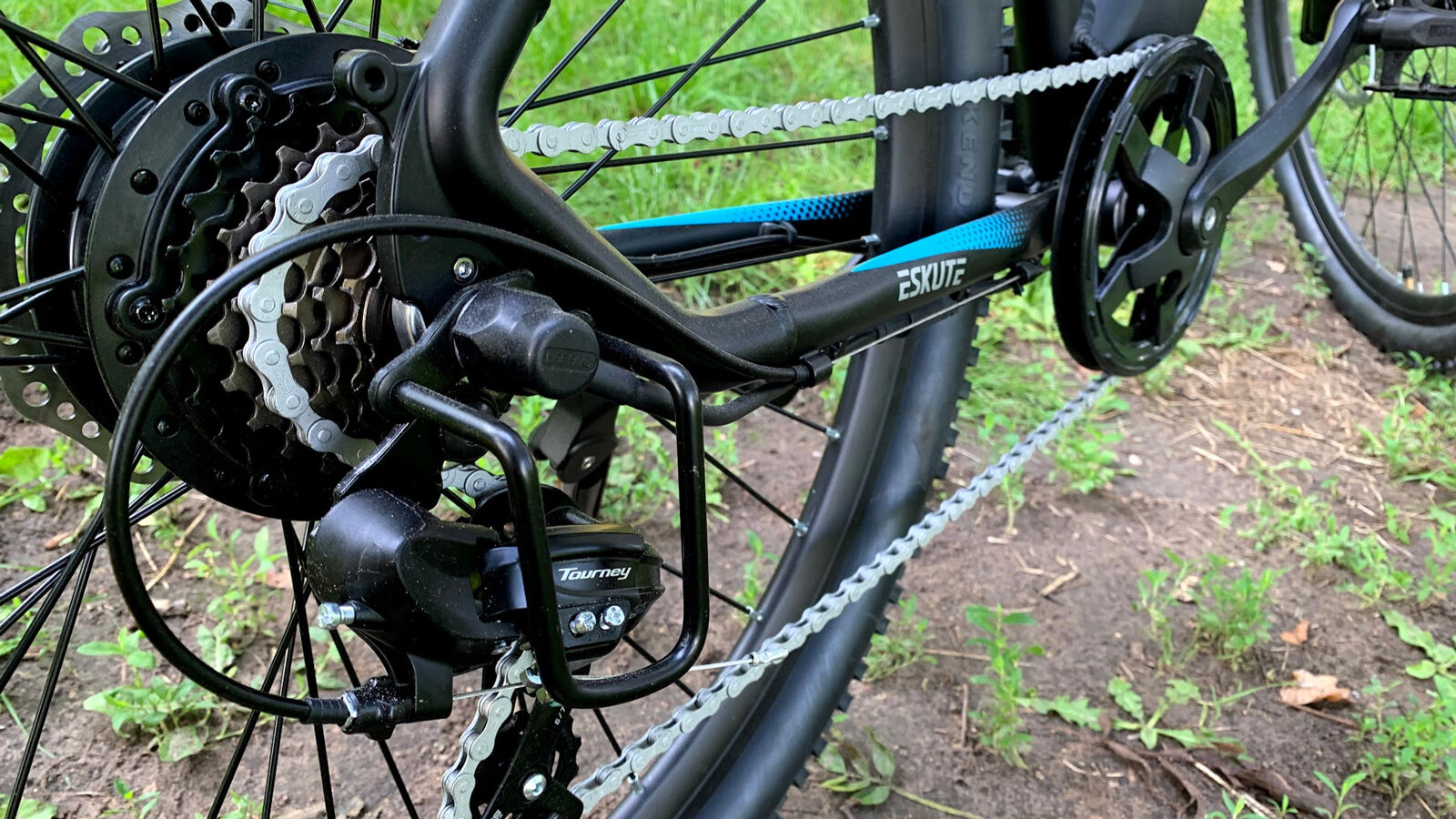 The saddle and front wheel have quick release clamps, but the rear – where the Bafang motor lives – has nuts. The motor has a nominal power rating of 250W, but has plenty in reserve: more on that later.

Usefully, the battery is removable so you can unlock it from the frame where it sits in the down tube and charge it separately from the bike. 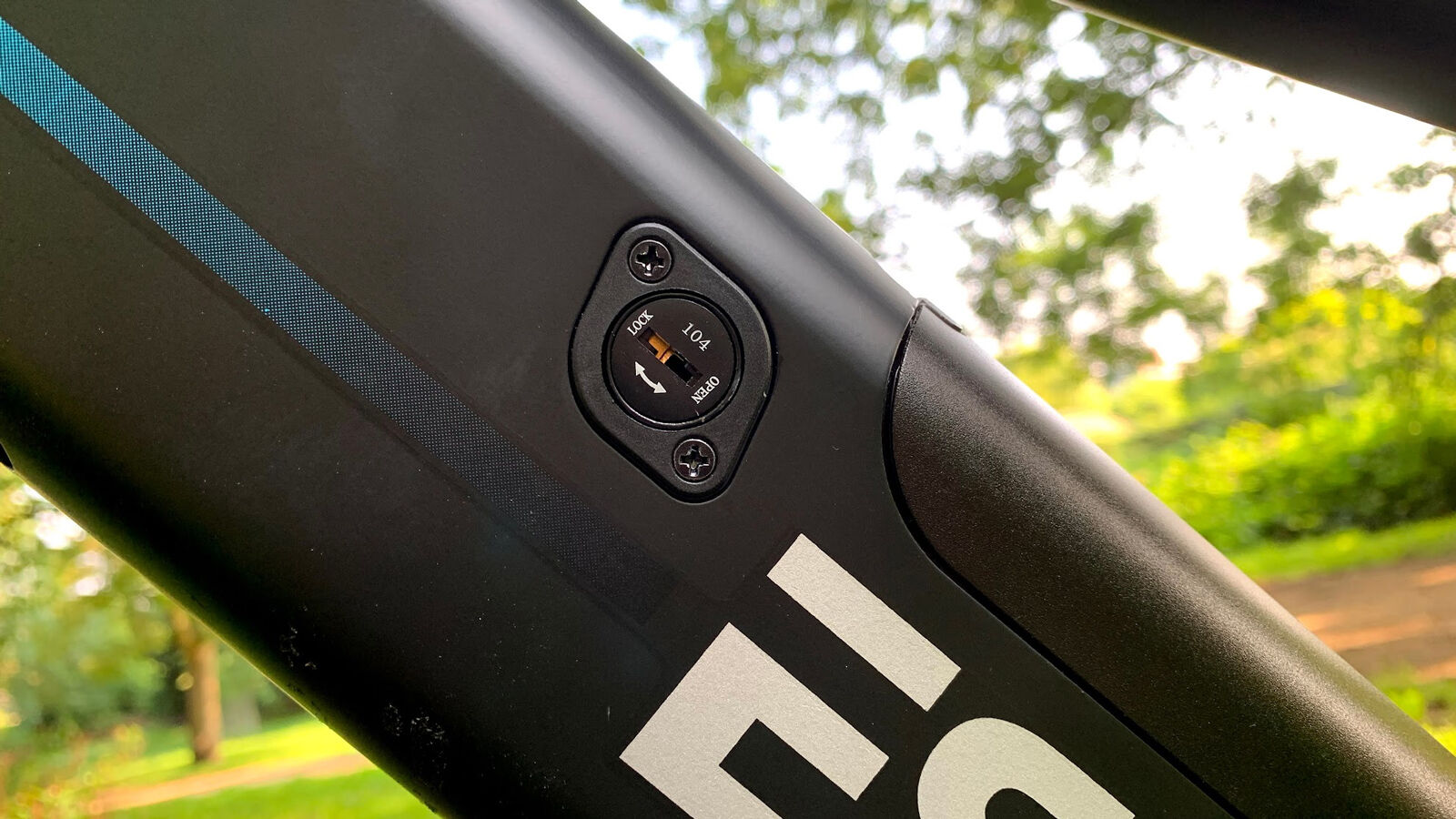 As with so many Chinese bikes, the Voyager has a familiar-looking front LED light with a surprisingly loud horn built in. There’s no rear light: you’ll find a reflector in the box to attach to the seat post.

You’ll also find a rear mudguard and a throttle in the box (with the UK model, at any rate). You can fit this, along with the supplied shorter handle grip, if you intend to ride only on private property, as this turns the bike into an electric moped where you can use the motor without pedalling.

Like all electric bikes, the Voyager is limited to 15.5mph / 25km/h in Europe.

Like the Fiido M1 (and also L3), the Voyager uses a 48V battery instead of the usual 36V. Debates rage over whether 48V is better or not. The fact is, you either get better range or more power. 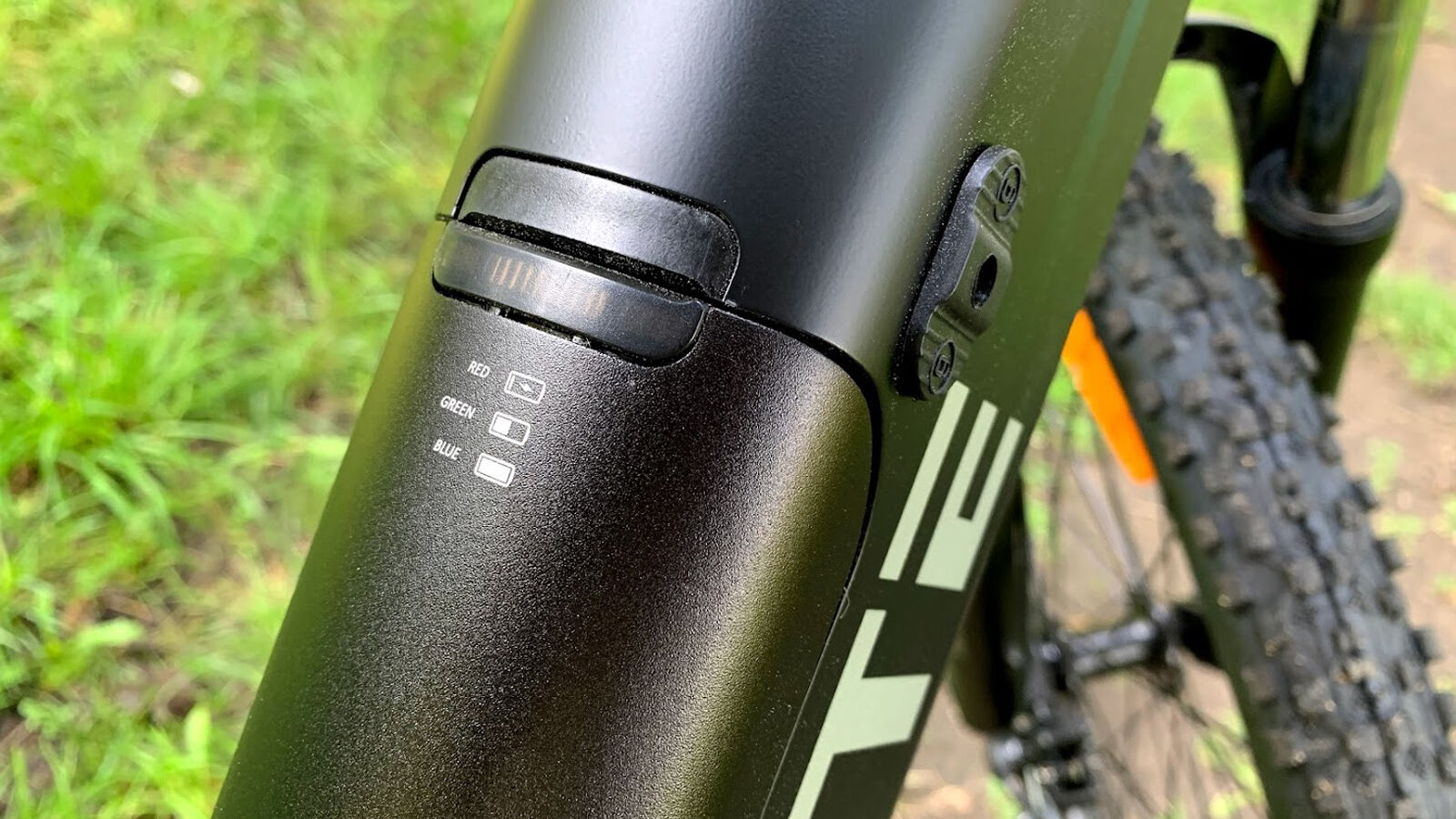 Since it’s not possible to compare this to an identical 36V bike, it’s not possible to say which benefit you’re getting here. However, objectively, the Voyager has a good deal of grunt which is exactly what you need for getting up steep single-track – or any hill for that matter.

It’s great to see a Bafang motor: it’s better quality than you’d usually find at this price. It should be reliable but – importantly – repairable if it does ever develop a fault. 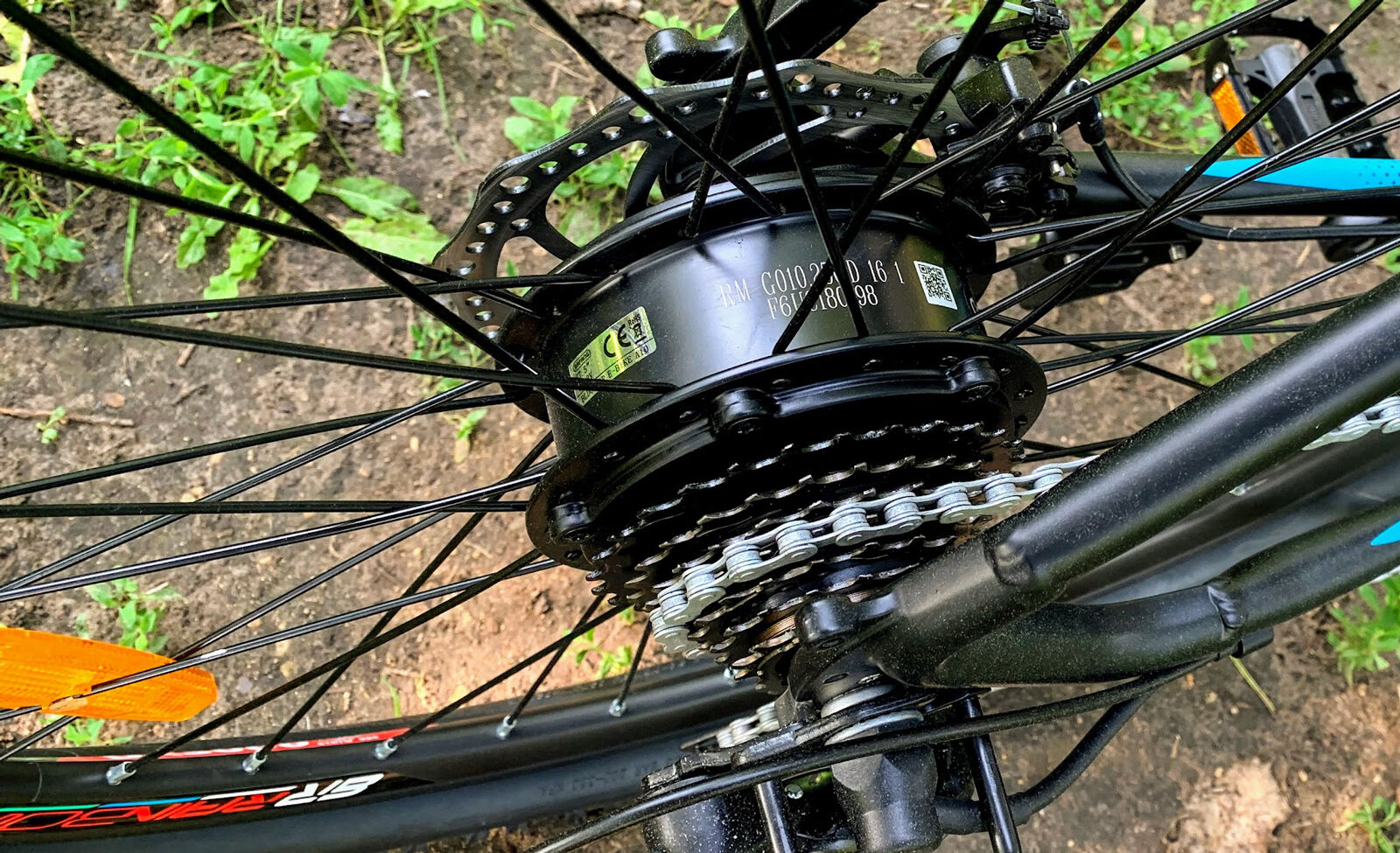 Just note that Eskute only offers a one-year warranty (two years only on certain components).

The handlebar-mounted display lets you pick between five power modes plus a 0 mode which disables the motor entirely. That’s useful for when you’re performing slow, tight manoeuvres and don’t want the motor kicking in and throwing you off balance and into the dirt. 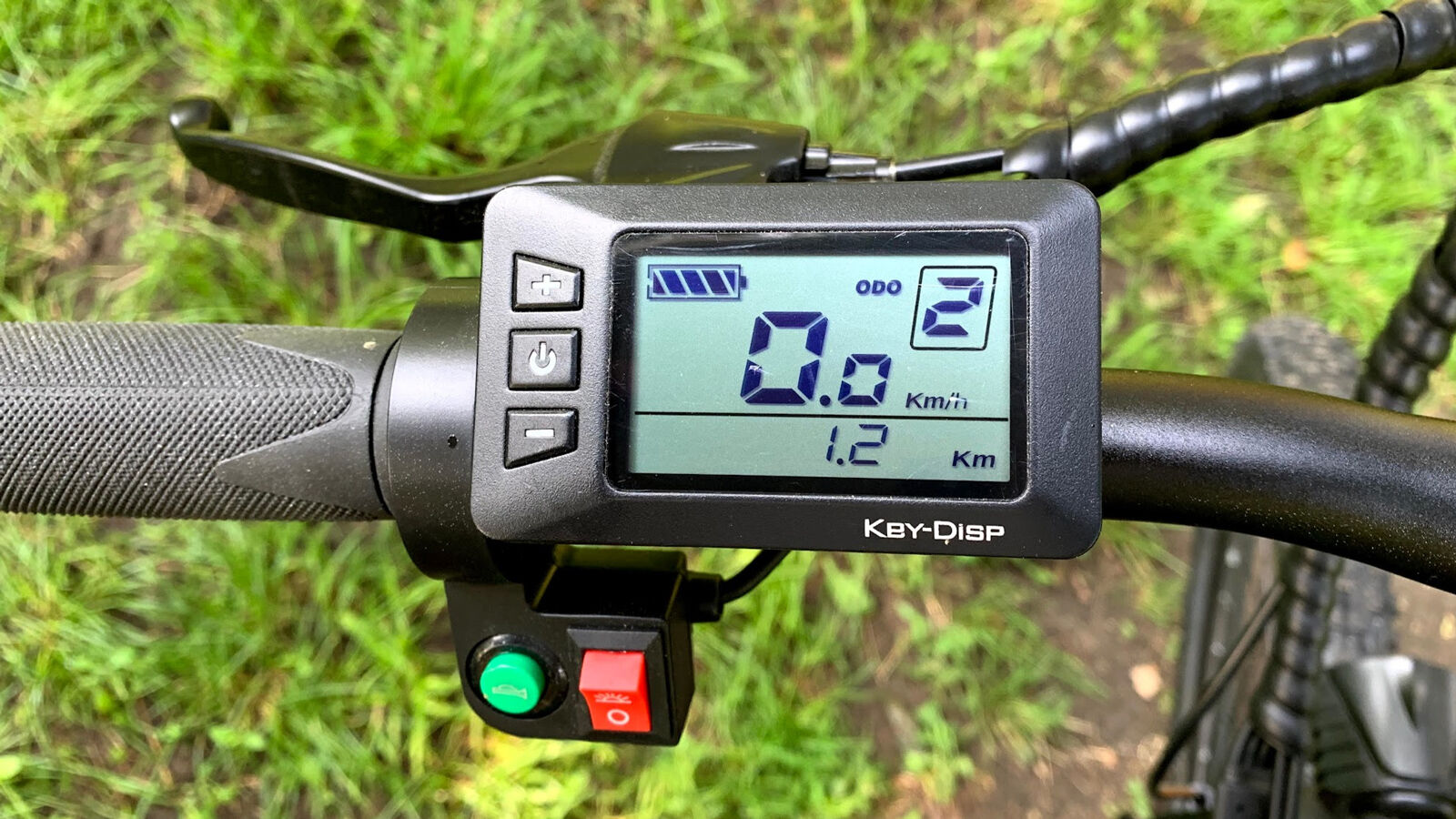 And, believe me, it will do that. Unlike more expensive bikes which use torque sensors to know when and how much power to deliver, the Voyager cuts costs by opting for a cadence sensor. That’s common in most budget e-bikes but it means that the motor will start when you pedal: it has no idea how hard, or softly, you’re pedalling.

Factor in the 48V system, which means a third more power than 36V bikes, and it’s the opposite of subtle. It’s great fun to have that power on tap, but you have to get used to the jerky delivery and switch into that 0 mode at slow speeds.

If you don’t want the speed in km/h, you can hold the + and – buttons,  then press the power button until you see the U menu where you can use the – button to swap to mph.

Having jumped from the Volt Pulse straight onto the Eskute, there’s a noticeable difference in ride comfort. That’s not really a surprise given the price difference, or the fact the Pulse isn’t a mountain bike, but on riding both down my local Big Hill, the Eskute felt a lot more jittery and unstable.

That could have been partly down to the fact I’d deliberately left tyre pressures fairly low, which is what you want for off-roading, but it was unsettling, nevertheless.

In its natural habitat, on dirt paths, the Voyager does a great job. I’d like it to be a bit lighter, but once you do get used to how the power comes it’s possible to anticipate which power mode you need for any given incline.

The big 27.5in Kenda tyres offer good grip and are puncture resistant to boot. The budget fork does a brilliant job of soaking up the bumps but given the budget nature, it may not stand up to serious downhill mountain biking, particularly if the courses aren’t rollable and involve jumps.

Bear in mind, too, that the Shimano gears are very much entry level kit, and the limited ratios aren’t ideal for very steep off-roading, but for casual forest rides, it’s perfectly fine. 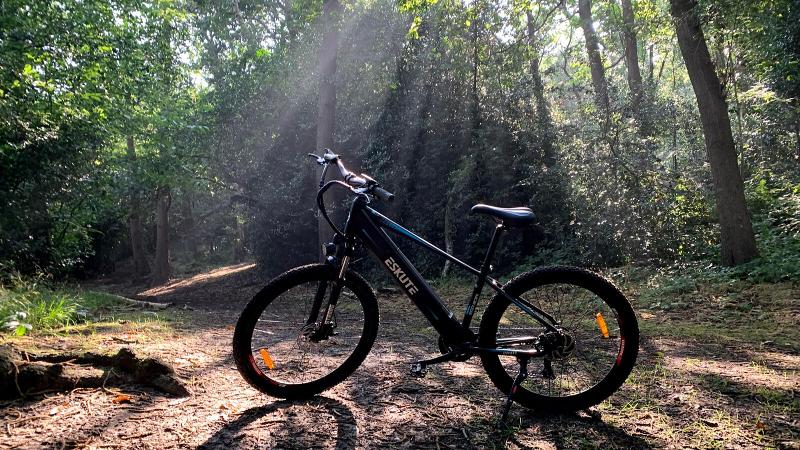 If there’s criticism to be levelled beyond this, it’s that the brakes aren’t amazingly powerful. I’d also remove the orange reflectors, which make it looks like a kid’s bike and aren’t required by law in the UK.

Eskute says the Voyager can cover 100km between charges, so long as you’re pedalling. It’ll take you up to 50km purely on the motor, but that’s only if you have the throttle fitted and where you’re allowed to ride it like this.

Both are, of course, best-case scenarios on flat road in warm conditions. For actual mountain biking, expect significantly shorter range. And because this is a heavy bike, save the juice for when you really need it to get up the steepest parts: your legs won’t appreciate the extra effort required once the battery is flat.

Your mileage will vary – literally. Expect between 20 and 40 miles (32-64km) on a full battery with a mixture of on- and off-road riding when you’re putting in the effort by pedalling.

The Voyager costs £999 direct from Eskute.co.uk.

For alternatives, see our roundup of the best electric bikes.

If you’re based in the UK, you might prefer to head to Halfords and buy a Carrera Vengeance E. It costs similar money and offers the reassurance of bricks-and-mortar stores for warranty repairs. 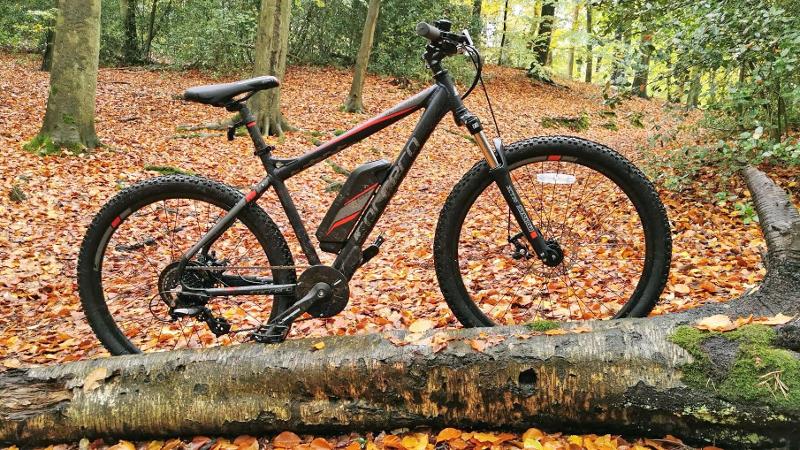 However, the Eskute is better value if you’re happy to buy online. The integrated battery is much neater, and the 48V system and Bafang motor are a better combination than the Vengeance E’s 36V Suntour setup.

Another alternative is Fiido’s fold-up, fat-tyre M1. It has front and rear suspension but is a bit more unwieldy and harder to control than the Voyager. It looks cool, though, and folds up to save space in storage. 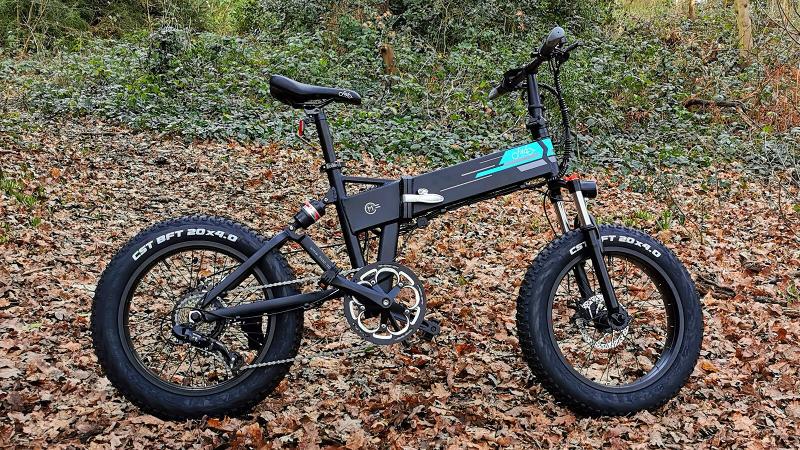 Ultimately, the Eskute is good value. Yes, there are budget components such as the fork and others, but you’re getting decent value with the Bafang motor, 48V battery and other branded components.

Don’t buy any of these to ride on the road, but for some off-road fun, the Voyager doesn’t disappoint for the price.