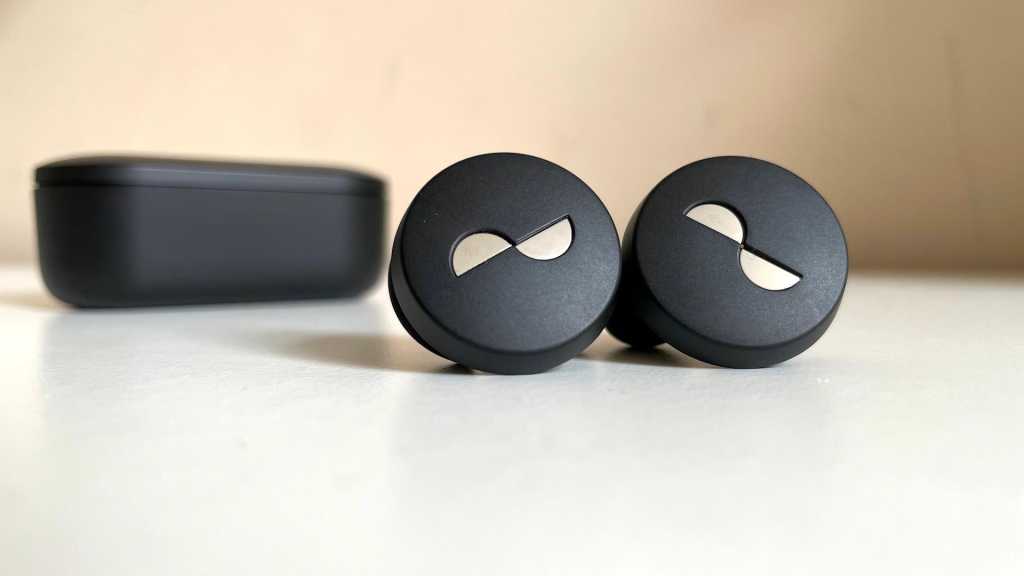 The NuraTrue wireless earbuds offer an immersive audio experience personalised for your ears that stands out from the crowd, even if the ANC isn’t quite up to scratch.

Nura took the steps towards wireless earbuds with the NuraLoop in 2020, but they were technically neckbuds. That’s not the case with NuraTrue, the company’s first pair of true wireless earbuds packing Nura’s signature personalised sound, offering the combo fans have been waiting for.

The question is, can the small earbuds replicate the incredible personalised sound from the headline Nuraphone over-ear cans while also competing with established buds like the AirPods Pro and Bose QC Earbuds? Well…

The shape of the 6g NuraTrue earbuds is interesting; they sport a circular exterior complete with Nura logo, with a smaller wingtip and eartip on the inside. You may worry that the odd design might offset the weight and cause them to come loose, but that’s not the case. 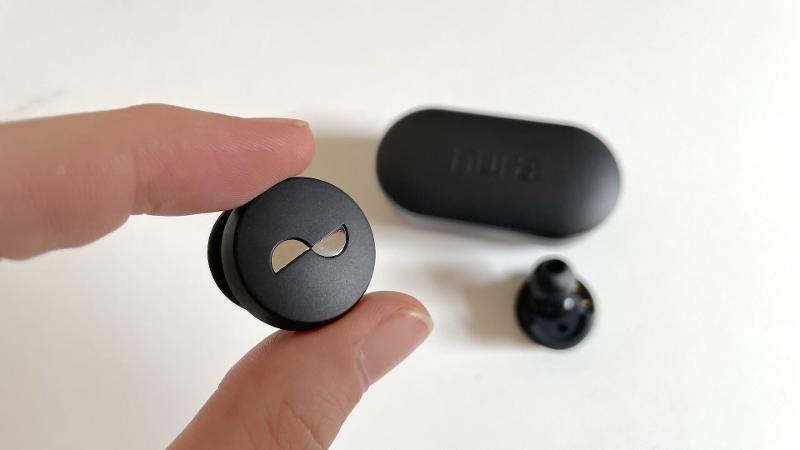 The NuraTrue buds offer a great fit, especially if you take the time to experiment with the 2 sets of wingtips and 5 sets of tips – including a set of memory foam tips. I often struggle with earbuds coming loose during use, but I’ve not found myself having to adjust the NuraTrue buds anywhere as often as I would with the AirPods Pro.

The matte black design is sleek, and the silver Nura logo on each bud doubles up as a touch-capacitive surface that can recognise a handful of shortcuts – more on that later. They’re also IPX4 rated, meaning you’ll be able to use them when sweating it out at the gym or jogging in the rain.

That said, they aren’t the stealthiest earbuds on the market. The black discs do protrude from the ear slightly, making them easier to spot than more compact earbuds like the Samsung Galaxy Buds Live. 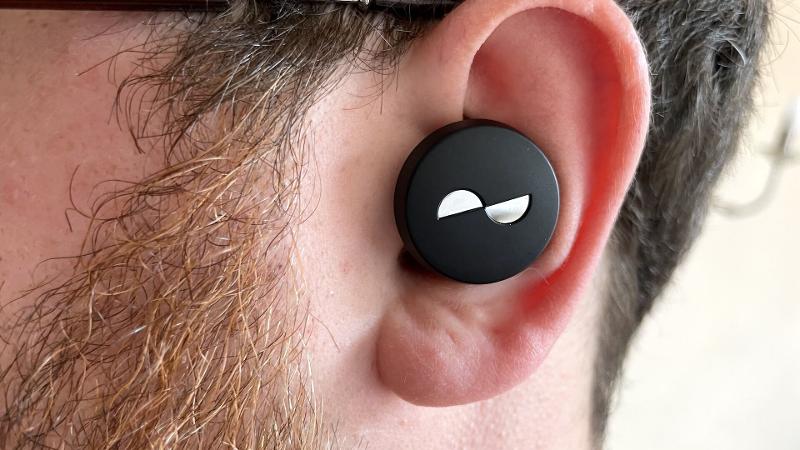 The matching all-black charging case is simplistic in design, sporting Nura branding on the lid, a USB-C port on the rear for charging and LEDs on the front to display the current charge. It’s fairly compact too, measuring in at just 72.4 x 30.2 x 21.9mm.

The combination of a plastic body and a matte finish means it is a bit of a scuff magnet though; even with careful use, my sample has multiple light scratches and scuffs after a little over three weeks.

NuraTrue set themselves apart from other true wireless earbuds because, despite the tiny size of the buds, they’re smart enough to tailor the sound output depending on your ears and the way that you hear. Though it may sound like a bit of a fantastical claim, Nura has proven itself with its Nuraphone headphones and NuraLoop earbuds in the past, and it’s much the same story with the NuraTrue.

The setup process revolves around the Nura app for iOS and Android – you’ll be prompted to download it once you pair the buds with your phone for the first time if you haven’t got it installed already. 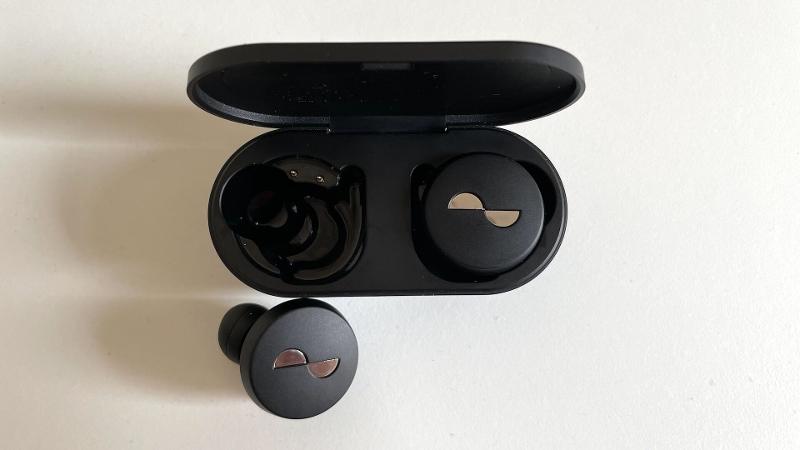 Once in the app, you’ll be taken through the sound personalisation setup. It may sound daunting, but it requires little more than sitting in a quiet environment as to not pollute the setup with exterior noises. There’s even a fit test to make sure you’ve got the optimal fit ahead of the personalisation process for the best results.

As with other Nura products, the NuraTrue buds play a range of calibration sounds and, using internal microphones to measure the effects of otoacoustic emissions inside your ears, create a custom sound profile tailored to your hearing range.

It’s once your profile has been created that you’ll truly appreciate the magic that Nura has packed into the tiny buds; you’ll be played a demo track, and using on-screen toggles, you can switch between a neutral profile and your personalised profile. 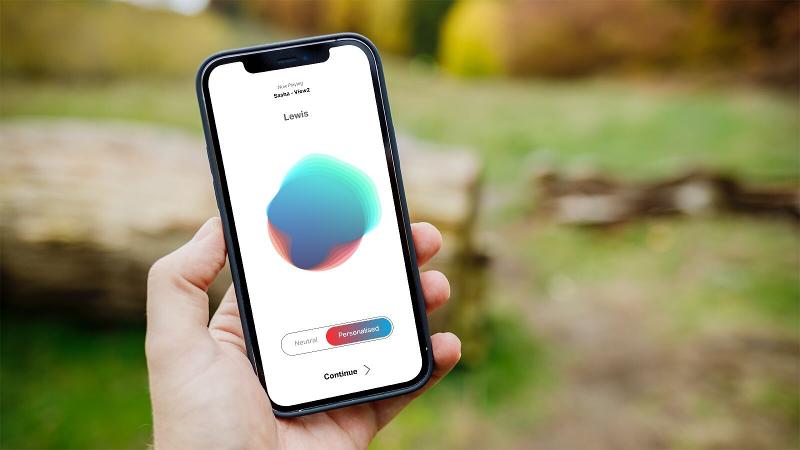 While you might think the neutral profile sounds fine, switching to your personalised profile provides a stark and instantly noticeable difference, as if someone flipped a switch and you’re hearing high-definition audio for the first time. It’s not some cheap trick either; listening to audio using someone else’s sound profile genuinely sounds different to what’s produced by my profile.

That sonically shaped audio makes for a truly revolutionary sound experience surprisingly similar to that provided by the top-end Nuraphone over-ear headphones, despite the tiny dimensions.

The drivers are more than competent, handling thumping bass that doesn’t overpower the clear mid-range and detailed high-end, providing an experience simply unmatched by most of the true wireless earbud competition in 2021.

The levels of bass, in particular, is spectacular considering the form factor and it’s a joy re-listening to old tracks for what feels like the first time all over again, noticing detail in songs I’d previously missed. 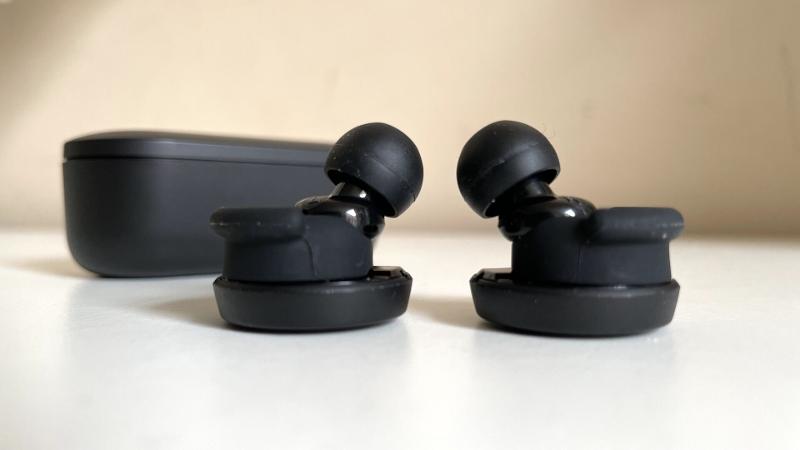 The Immersion mode found in other Nura products is present in the NuraTrue, too. Controlled via a slider in the Nura app, immersion mode essentially boosts the bass and mid-range to emulate the experience of a live performance with spectacular results.

It’s most noticeable in bass-heavy songs like Masked Wolf’s Astronaut in the Ocean where you truly lose yourself in the bass, but it also makes for warmer vocals and a generally more impactful listening experience.

There’s support for aptX, SBC and AAC codecs, meaning high-quality Bluetooth 5.0 streaming on both iOS and Android, though it is missing the Hi-Res LDAC codec support making an appearance in high-end buds including the Sony WF-1000XM4. I’d argue that personalised audio playback has more of an impact than Hi-Res Audio, but that’s largely down to personal preference.

Nura’s personalised sound output is one thing, but they wouldn’t be high-end true wireless earbuds without the inclusion of active noise cancellation (ANC) – aka cancelling. It does what it says on the tin, cancelling out exterior noises that distract you from your tunes, but it’s not quite as effective as the AirPods Pro or Sony’s WF-1000XM4 in use.

There’s certainly a quietening of the environment, but there’s still noticeable exterior sound leakage, especially when listening to podcasts or audiobooks rather than music. It’ll depend on the environment you’re in, of course. It’s better at handling quieter, low-pitched hums rather than the high-pitched hiss of a passing bus, but if you’re looking for buds that’ll completely silence the outside world, the NuraTrue buds probably aren’t for you. 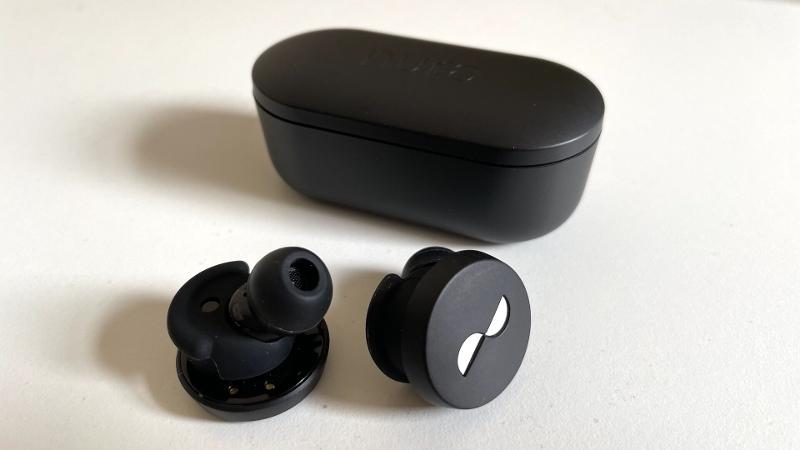 Alongside ANC, the NuraTrue offer the same Social Mode experience as other Nura products, also known as transparency mode or ambient mode on competing earbuds.

The idea is simple; when you need to quickly talk to someone – like a shopkeeper or bus driver – you can activate social mode, which turns down your music and funnels in outside sound using the exterior microphones, making it easier to converse without taking an earbud out.

Most people, myself included, will take an earbud out to talk to someone, but it’s handy if you only need to exchange a few words. It can also be used to listen out for announcements when needed or just generally be safer when out and about in busy places.

I prefer to take an earbud out because the NuraTrue earbuds feature auto play/pause technology that can be configured to automatically pause when either one or both earbuds are removed. Though it’s a fairly standard feature of high-end wireless earbuds in general, it’s good to see it here. 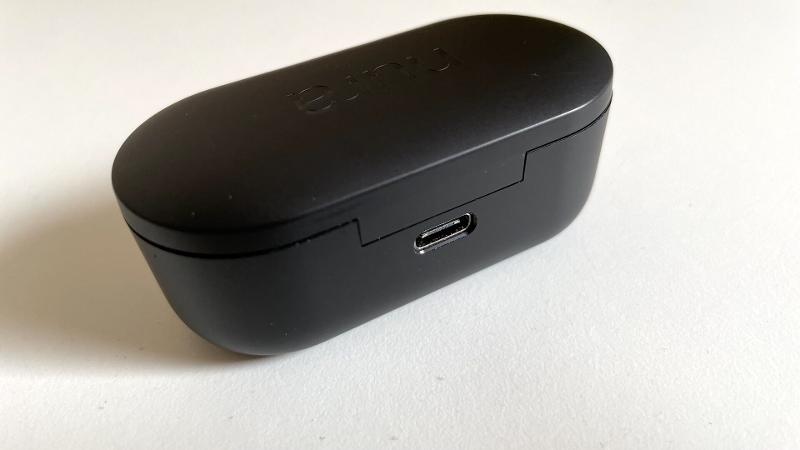 The NuraTrue earbuds sport touch controls with an implementation much better than most premium rivals. For one, the NuraTrue earbuds feature a capacitive touch surface instead of a motion sensor, meaning you won’t need to tap the buds so hard to activate the shortcuts.

More importantly, though, is that the touch area is relatively small, relegated to the Nura logo on each bud, making accidental activations non-existent. No more accidentally skipping tracks when adjusting the fit as with the frustrating second-gen Google Pixel Buds.

As you might expect, the touch controls can be customised via the Nura app to suit your needs. There are both single- and double-tap controls available for each earbud, but there aren’t triple-tap or tap-and-hold options to pack more shortcuts into the buds.

Still, you can select your four most used functions (ranging from skipping calls to enabling social and immersion modes) and map them however you’d like.

The NuraTrue earbuds don’t disappoint in the battery department, offering around six hours of personalised playback with ANC enabled, and there are another 18 hours of charge in the case. That should keep you going for at least a few days, and unlike earbuds like the RHA TrueControl ANC, the buds don’t slowly drain when not in use – they’ll hold a charge for weeks, if not months.

Battery life is easy enough to check at a glance with four LEDs on the front of the case lighting up when flipping the lid open, and there’s a battery indicator built into the Nura app too. 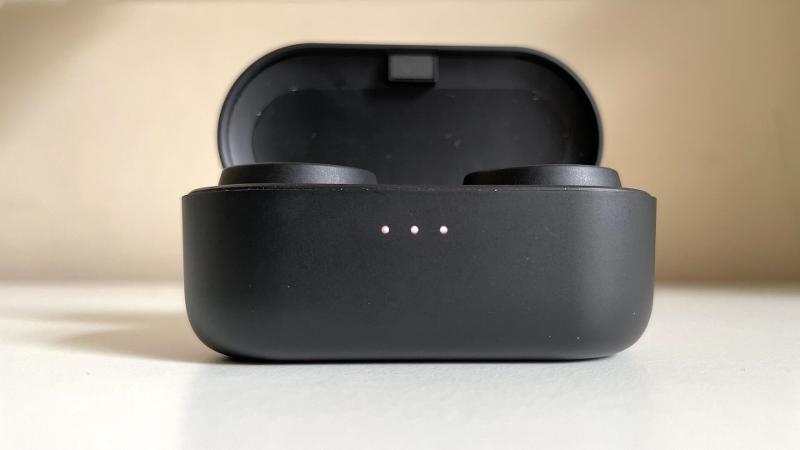 Nura refers to the case as a ‘fast-charge case’ but that’s not completely true; while competing buds like Apple’s AirPods Pro offer an hour of use after 5 mins of charge and fully charge within an hour, the NuraTrue buds take around two hours to go from flat-to-full, and it takes around two and a half hours to charge the case via USB-C.

It’s not a dealbreaker by any means, but there are certainly faster charging buds on the market.

Coming in at £199/US$199, the NuraTrue earbuds aren’t the cheapest earbuds in the market – especially when you can pick up ANC-enabled buds like the Huawei Freebuds 4i for less than £100/US$100 – but they’re a bargain compared to Nura’s premium Nuraphone, coming in at £349/US$499, with the same signature personalised sound output.

It’s not totally out of the norm for wireless earbuds either, with popular options including the AirPods Pro and Sony WF-1000XM4 coming in at around the £249/US$249 mark – £50/US$50 more than NuraTrue.

If you’re tempted, the NuraTrue true wireless earbuds are available right now via Nura, with stock expected at the likes of Amazon and Currys soon.

If you want a better idea of the competition, take a look at our selection of the best true wireless earbuds.

NuraTrue has achieved the impossible; it has successfully taken the tech that produces the personalised sound from the high-end Nuraphone and shrunk it down to true wireless earbud form with impressive results.

After a quick setup process, you’re free to enjoy music tailored to your ears, with a noticeable improvement in overall clarity compared to other wireless earbuds in the market. The drivers are capable, offering immersive bass that doesn’t detract from a warm mid-range and a crisp high-end.

Sporting a premium design and unique disc-shaped outer edge, the buds certainly look the part, and with multiple sets of tips and wings in the box, you’ll achieve a secure fit perfect for exercise too.

Though the earbuds might not be able to compete with the likes of Sony’s WF-1000XM4 in terms of active noise cancellation, it’s a relatively minor complaint of a stunning pair of true wireless earbuds.