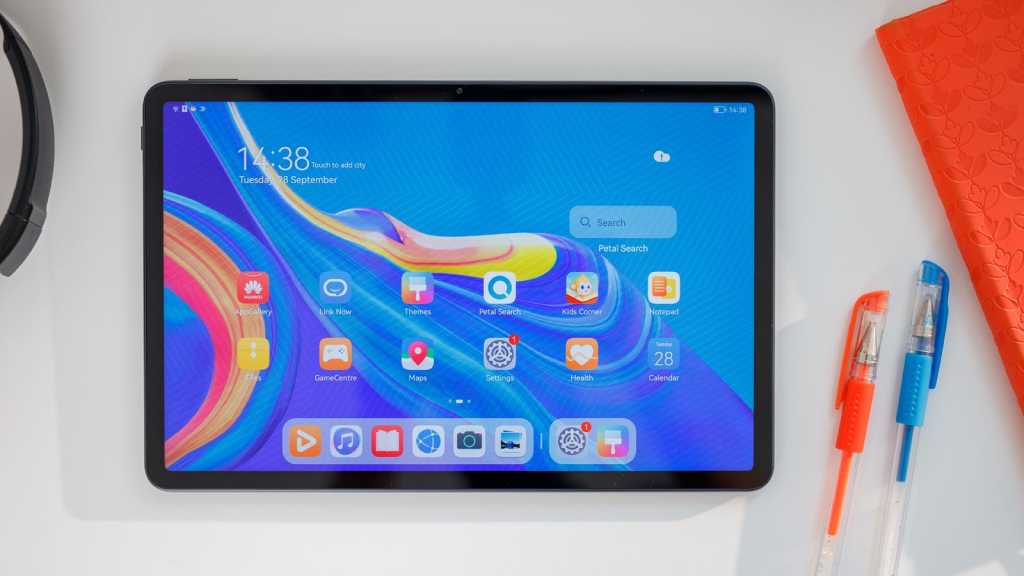 Huawei typically delivers a slick product and software combination. While there is little wrong with the hardware, for those invested in the Google infrastructure transitioning to Huawei-controlled cloud services and applications in the new HarmonyOS won’t feel like an upgrade path.

The Huawei MatePad series is specifically aimed at business users that want a powerful and highly portable tablet that doesn’t have a Samsung or Apple logo emblazoned on it.

Customers get to choose a range of sizes, colours, and capabilities that start with the incredibly cheap MatePad T8 to the more costly MatePad Pro models.

Previously these machines have run Android, but due to the breakdown of relationships between Huawei and the US authorities, they’re distancing themselves from Google’s services and operating system, and so the tablets now run the company’s own HarmonyOS.

The new MatePad 11 offers a marginally bigger screen and a new operating system, but will existing Google users want an operating system that isn’t Google and doesn’t include its apps and services?

Android tablets have boiled down to be remarkably similar, whichever brand is on them. Almost without exception, they offer forward and rear-facing cameras, a volume rocker, a power button, USB-C charging and, if you’re lucky, a SIM tray that can hold a MicroSD card.

The MatePad 11 has all those things, comes in Matte Grey, Isle Blue and Olive Green colours, and sports a bright and colourful 10.95in IPS touch screen. 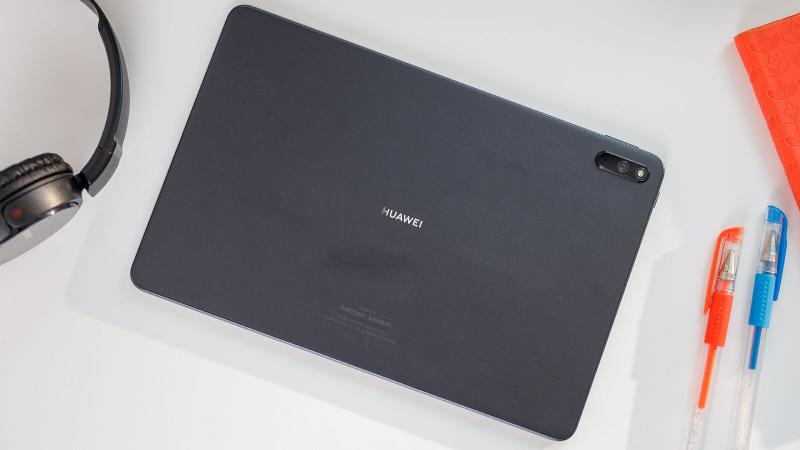 The only noticeable omission, other than no LTE options, is that it doesn’t have a 3.5mm audio jack for headphones, but an adapter to give this port from the USB-C charging port comes in the box.

Probably the standout hardware feature is the screen, a nearly 11-inch IPS panel with a very punchy colour gamut and a natural resolution of 2560 x 1600, making it closer to an iPad in ratio than most Android tablets. It’s reasonably bright, and would be easily visible in daylight had it not been given a very glossy finish that makes reflections something of an issue outdoors.

With a 120Hz refresh rate, this display is much better suited to gaming than the OLED display Huawei used on the MatePad Pro. 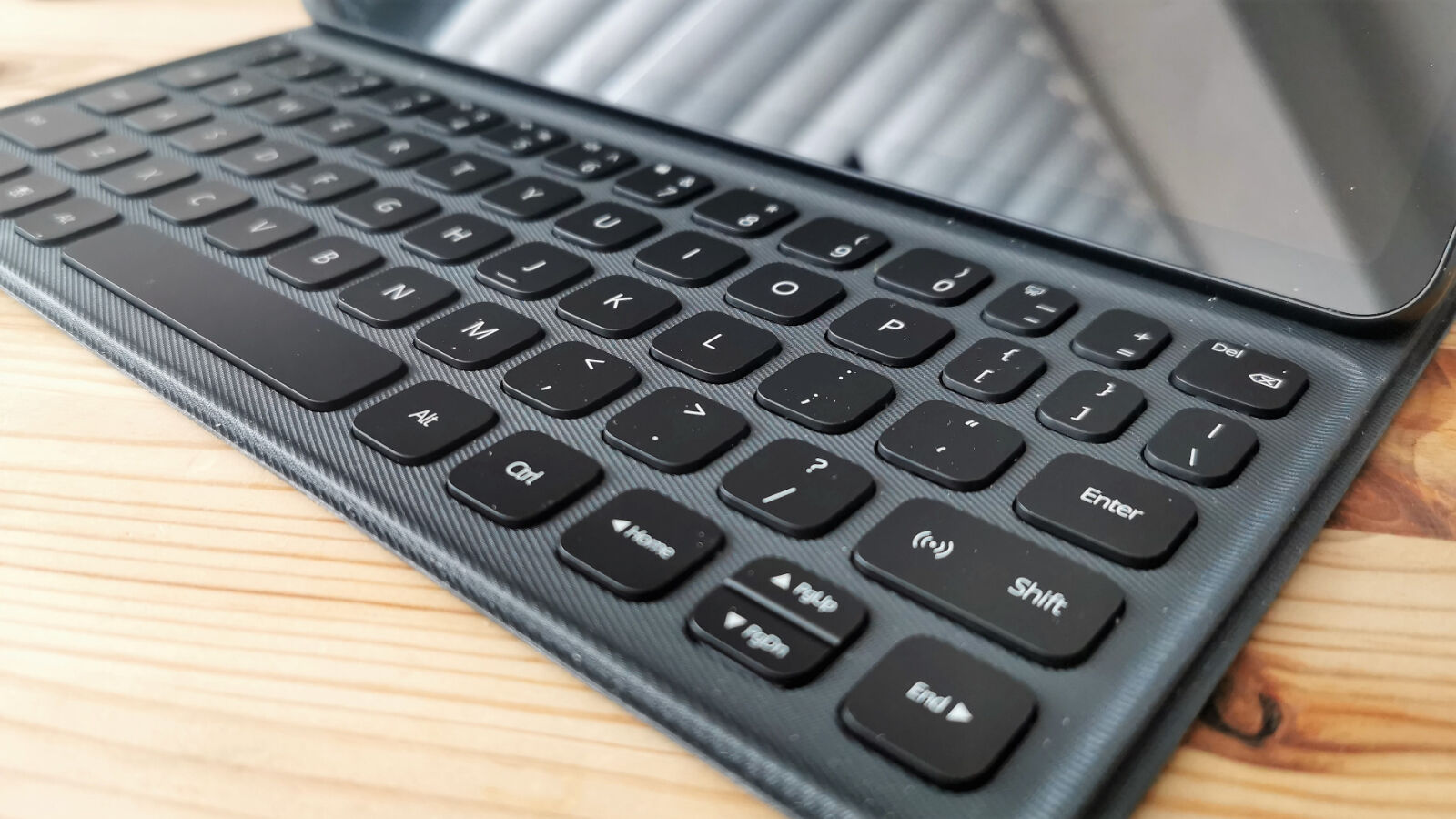 When you combine the two, you have a highly portable (485g and 130g) combination that can be used purely as a tablet or with the keyboard attached. It becomes much more like a small laptop.

You’d be unlikely to want to type large amounts on this keyboard, but it is an improvement over any screen-based keyboard as you can use both hands and multiple fingers.

Reports have recently circulated that Huawei is experiencing an issue getting enough Kirin chips to power its phones and tablets and that it might switch to using Qualcomm Snapdragon instead on the upcoming P50 series.

The truth of those stories is yet to be revealed, but the MatePad 11 uses the Qualcomm Snapdragon 865 5G, a powerful SoC with an unusual core configuration. Typically eight-core ARM processors are arranged into dual banks, with one of them offering a raised clock speed for intensive tasks. 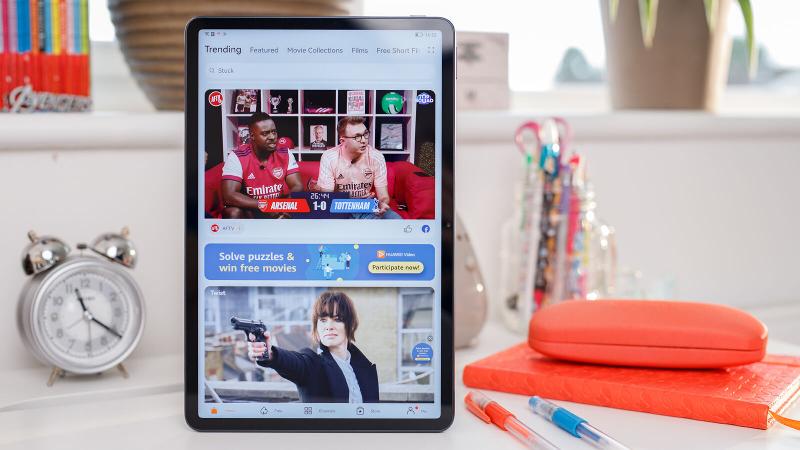 With these three levels of performance and excellent power consumption, this SoC has a wide range of performance able to be adjusted for the specific problems it is given.

The SoC is combined with 6GB of RAM and 128GB of internal storage that can be extended with another 256GB of space via the MicroSD card slot. That said, applications don’t run as well from the MicroSD card, so practically, that capacity is only useful for storing data.

Benchmarking revealed that the Qualcomm Snapdragon 865 is as good in this tablet as it is elsewhere, and the scores it delivered were better than the Galaxy Tab S6 and Lenovo Tab P11 Pro but couldn’t quite match Apple’s most powerful models.

As these tests are performed at the maximum resolution of the MatePad 11, they’re even more impressive when compared with some 1080p resolution tablets. 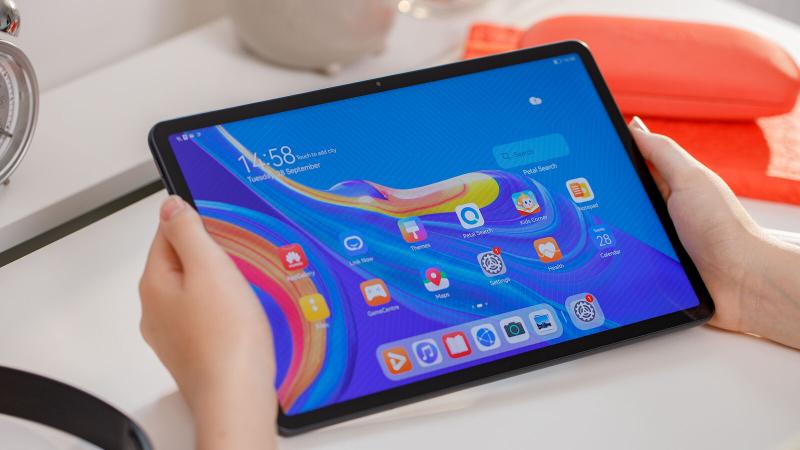 The cameras at the front and back aren’t anything special, but the rear can record 4K video at least. What’s a little odd is that compared with a very similar application that Huawei created for its phones, most of the special photo features are stripped out.  These include slow motion and HDR, but panoramic, beauty mode, documents and time-lapse remain.

Some of the missing choices are explained by a lower specification camera compared to the P30 and P40 phones, but other limitations appear arbitrary. For example, while you can pick 4K, 1080p, or 720p resolution video recording on the 13MP rear camera, even at lower resolutions the framerate is limited to 30fps. 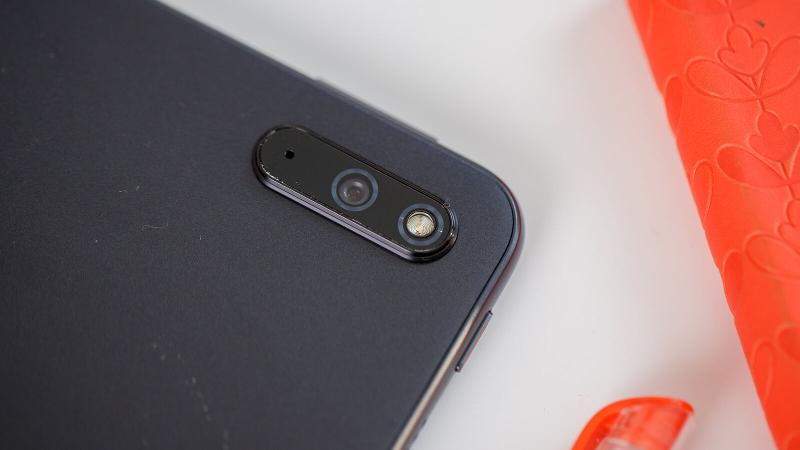 According to HarmonyOS 2.0 on this hardware, a fully charged MatePad 11 will last 40 hours and 48 minutes on ‘Performance Mode’ and 57 hours and 12 minutes on battery saving mode. We’d contest that due to numerous factors, a more realistic lifespan is close to the 18.5 hours that the PCMark Battery test determined, depending on what apps you run.

That’s an excellent score, and if you use battery saving mode, you could easily stretch three working days out of this capacity. With 22.5W wired charging, the battery can be boosted 20% in 30 minutes, and getting to 100% charge from flat takes around 160 minutes. 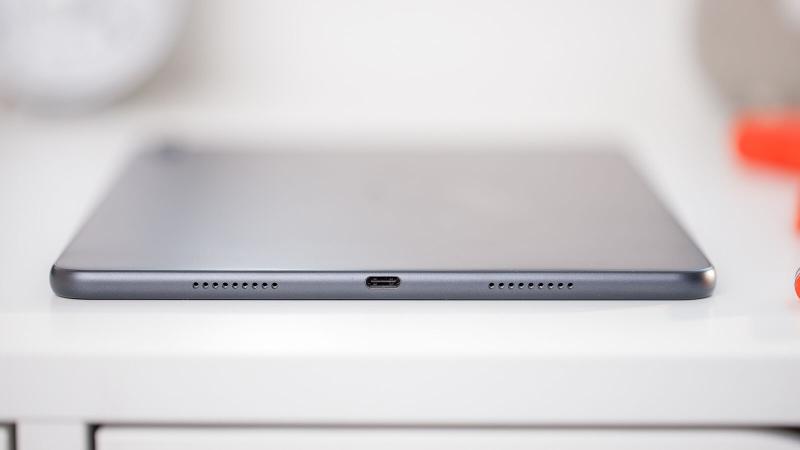 The user experience of the MatePad 11 is largely dictated by HarmonyOS 2.0, Huawei’s newly built operating system for this platform.

Huawei created HarmonyOS for tablets and phones because onerous US trade restrictions prevented it from releasing devices using Google Mobile Services, which in turn limited access to the Google Play Store and Google’s own apps.

Instead of continuing to release hamstrung Android devices, the MatePad 11 and the upcoming P50 series phones represent the second phase of this transition, where Android is removed entirely and replaced with HarmonyOS 2.0. So what is HarmonyOS, and what are the implications? 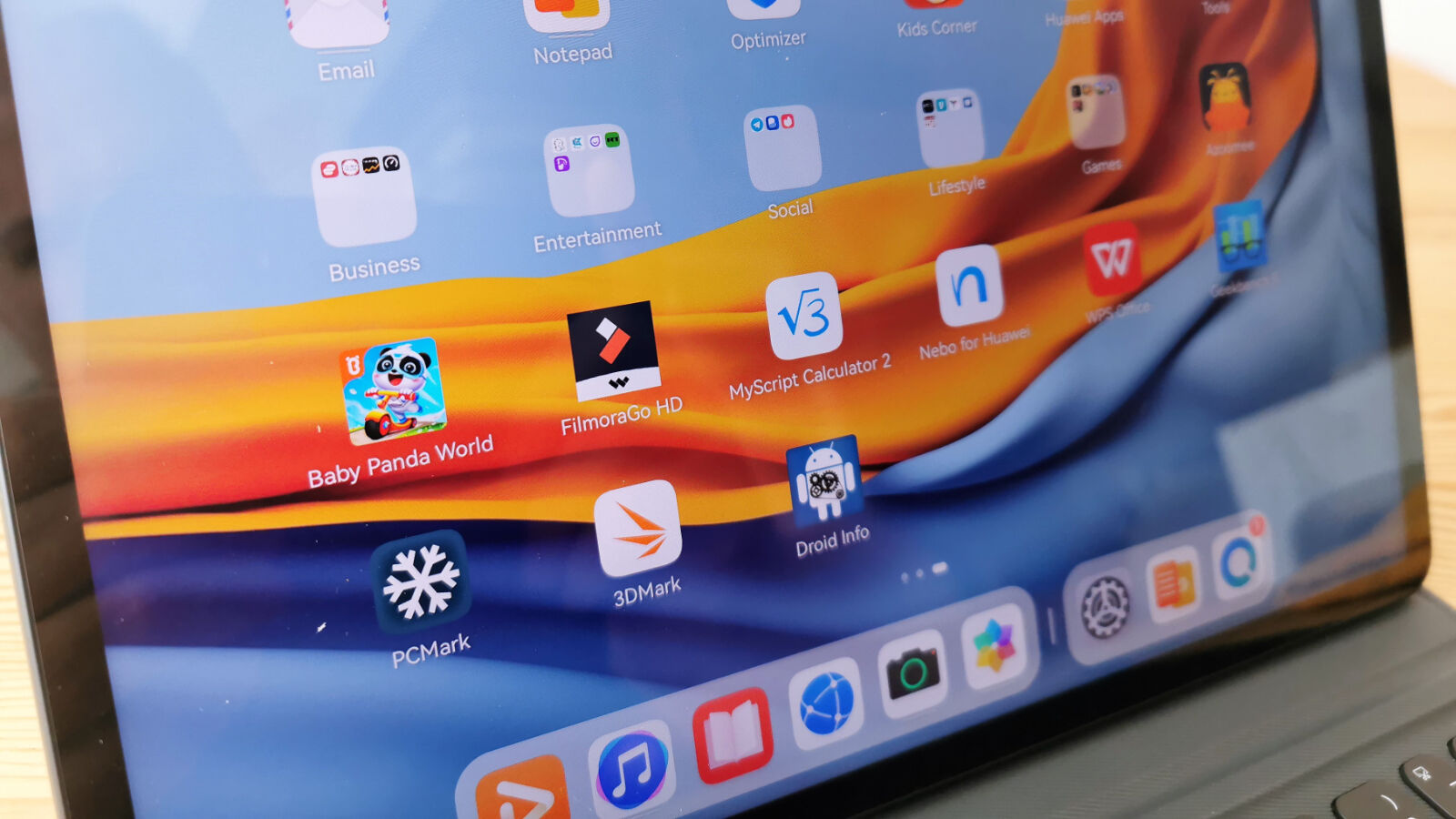 HarmonyOS 2.0, or Hóngméng as it was previously known, is an Android-like operating system based on LiteOS that uses a Linux Kernel and open-source Android code to deliver a user experience that is remarkably like Android 10 on previous Huawei devices that used its EMUI interface.

However, it is backwards compatible with Android APK packaged applications, allowing most of the popular tools to be sideloaded, and Huawei has its own AppGallery that contains some 45,000 applications at this time.

That might sound like plenty, but the Google Play Store has 3.48 million applications at the time of writing, and a search for many of the most popular applications came up blank on the Huawei AppGallery.

There are several obvious snags with this backdoor approach. For one, you’ll have to put your faith in Huawei’s anti-malware protections. The company says it has a system for vetting sites included in Petal Search, along with real-time legitimacy and malware checks, but there will always be increased risks to downloading from the web rather than a fully controlled app store. 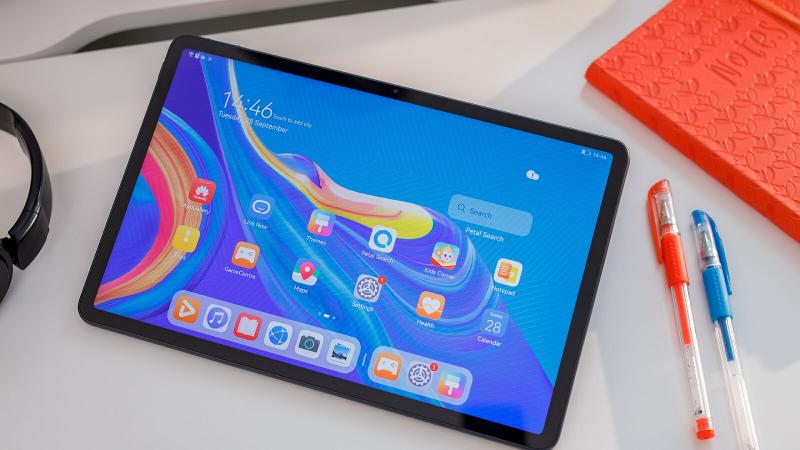 The bigger problem is that with no application store management, the applications won’t automatically update. It should also be noted that those applications that rely on Google services and logins also won’t work without them.

There are more issues ahead for APK packaged applications. Long before Huawei had a problem with them, Google had decided to revamp its application distribution mechanism by ending APKs and replacing them with a new Android Application Bundle, also known as AAB packaging.

Starting in August of 2021, all new applications placed on Google Play will need to be in AAB format, and alongside this change are other modifications for those titles that have expansions or instant experiences.

Huawei says that HarmonyOS is capable of supporting AAB apps, which are also included in the App Gallery’s documentation. In theory that means Petal Search should also be capable of pulling and installing AAB apps from the web, but only time will tell how smoothly the new format is supported. 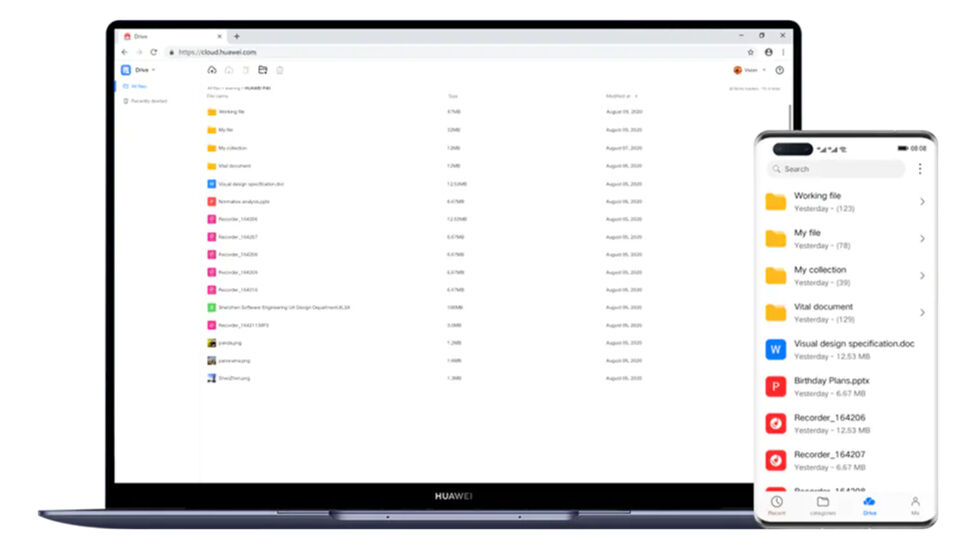 From my perspective, being slightly different to Android isn’t a compelling argument without some killer applications or functionality. And from what I’ve experienced with the MatePad 11, HarmonyOS 2.0 lacks maturity in places.

Most of the Huawei applications are workable, but none are any better than their Google counterparts. The inability to ‘Cast’ to Google TVs and Chromecasts easily is frustrating, but then you can’t easily get YouTube onboard so will need it less – and there are equivalent options to share content between Huawei devices that will help if you own other tech from the brand.

I also encountered several bugs in my time using the MatePad 11. One occurs when you edit an input like an email address, where pressing backspace causes the whole line to be added in twice, minus the last character.

The magnetically attached keyboard also had an issue connecting, resulting in choosing the wrong language for the keyboard and its keys not mapping correctly.

Occasionally for no good reason, the interface would ignore inputs for ten seconds or more before returning to its typical response level. All these things hint that HarmonyOS 2.0 is in need of a degree of polish to achieve optimal performance, maybe in release 2.1.

If you want to read more about HarmonyOS, read our hands-on guide to the software for more impressions of how it is to use on a tablet. 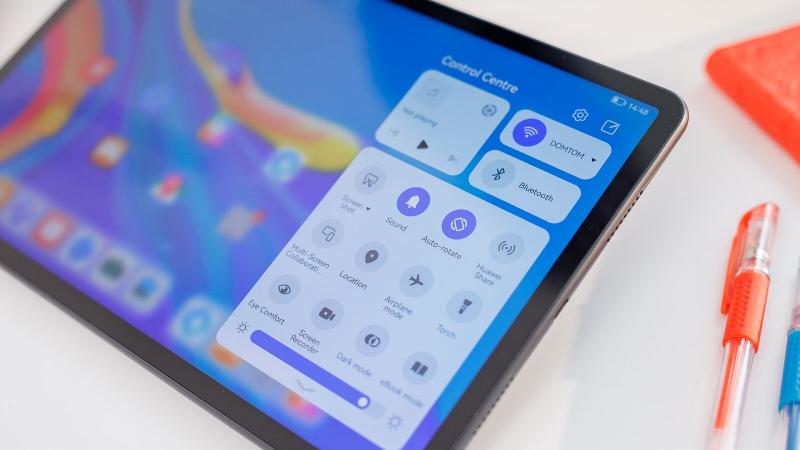 The MatePad 11 starts from £349/€399, putting it at a similar price to Apple’s entry-level iPad or Samsung’s mid-range Galaxy Tab S6 Lite.

If you’re able to spend more consider the MatePad Pro, Samsung Galaxy Tab S7, or the iPad Air or Pro models – but these are all high-end options with features that the MatePad can’t match.

The Huawei MatePad 11 does look a little on the expensive side, even if you consider it comes with 128GB of storage and some retailers are bundling the keyboard – check out our guide to the best tablets for more options we’ve reviewed if you’re not convinced.

The hardware in the Huawei MatePad 11 is top-notch, delivering a mostly smooth and powerful environment for ad hoc surfing and social media interactions. Other than installing Twitter, Facebook and Instagram on this machine isn’t a straightforward exercise, even if TikTok and Snapchat are available through the Huawei AppGallery.

The inelegance of sideloading APKs to add some applications and then manually maintaining them isn’t something most Android users would rush to embrace. Even as the number of HarmonyOS devices expands, the lack of mainstream applications on the Huawei AppGallery is a problem that can’t be easily addressed. 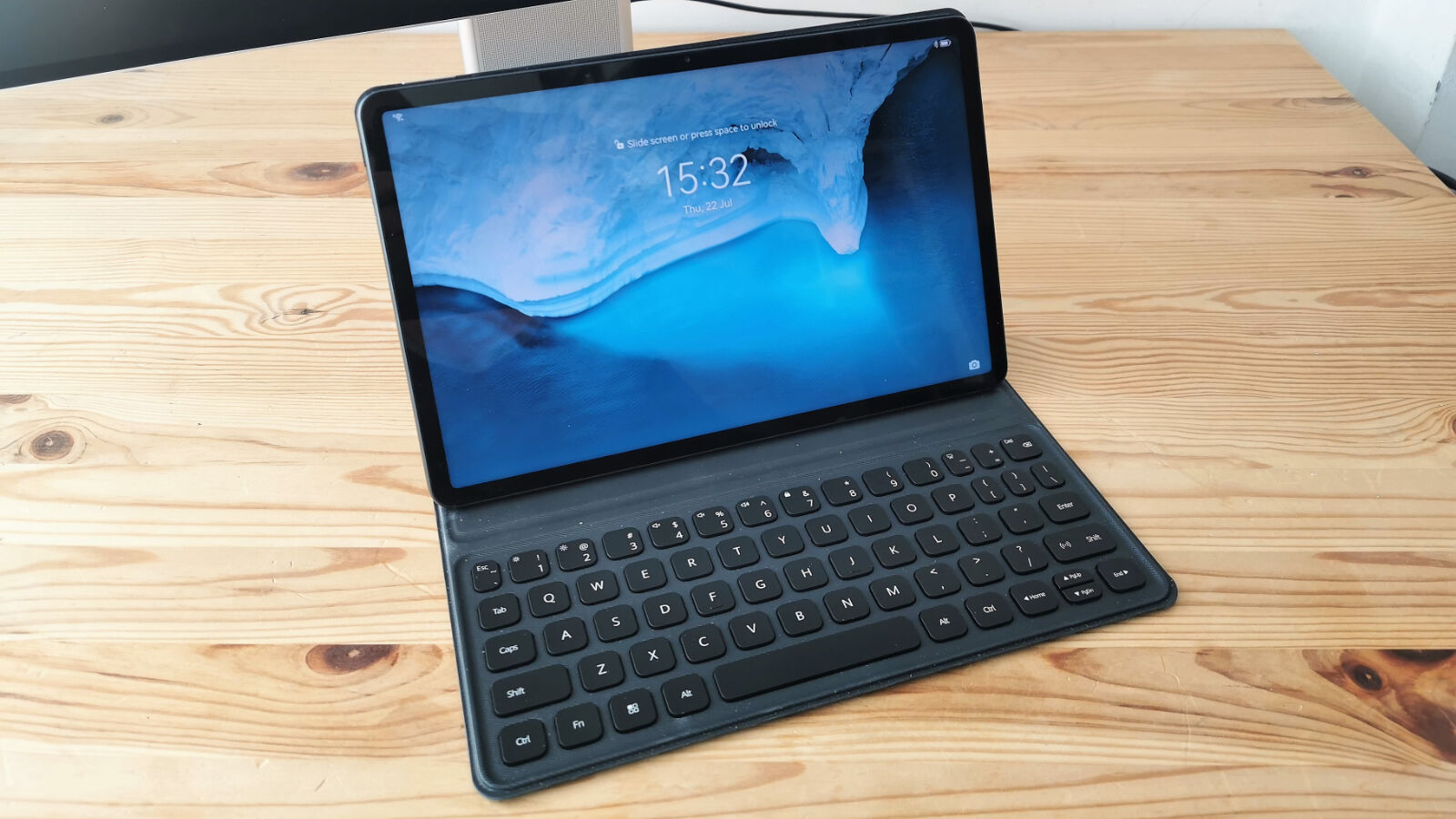 The Huawei MatePad 11 with Android 11 or 12 on it would have been a wonderful option for those that like this form factor, if only it were possible. But with HarmonyOS 2.0 on it instead, this device isn’t yet a serious alternative to the substantial Google infrastructure.

Those that don’t like Google probably have iPads already, and relatively few in the West would choose Huawei over Google or Apple. HarmonyOS might well carve out a successful future in China, but for westerners, it cannot replicate why Android became so successful and continues to be the most prolific mobile platform on the planet.

That’s a real shame because the hardware Huawei created here is excellent.