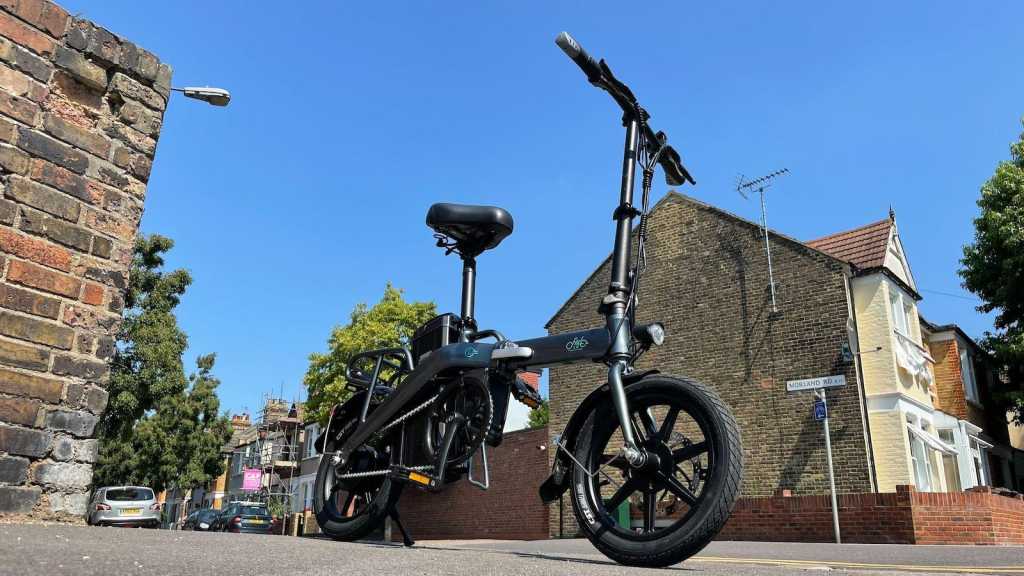 The Fiido L3 is a good-value foldable electric bike with great range, thanks to a huge 23.2Ah battery. The single-speed ratio is geared to slower speeds, but for city dwellers who can’t easily charge the battery or can’t be bothered to, it’s a great way to get from A to B quickly.

The Fiido L3 is the latest foldable electric bike from the Chinese manufacturer but unlike the off-road-focused Fiido M1, the Fiido L3 is a single-speed city bike through and through.

It may have a compact design – with small 14in wheels – but the Fiido L3 claims to have one of the longest ranges of any electric bike right now thanks to an impressive 23.2Ah battery.

The question is, how does it ride in the real world? Let’s find out.

The handlebars drop down, the seat retracts, the frame folds in half and you can even fold the pedals up which makes a big difference to its width. Folding and unfolding takes around 20 seconds once you know what you’re doing. 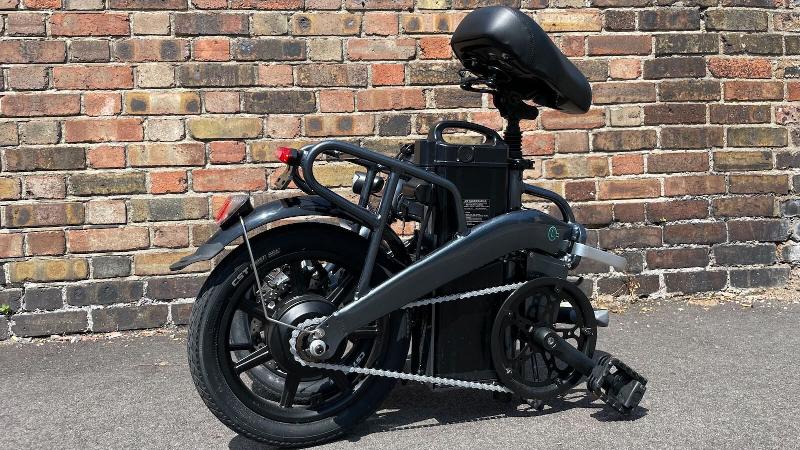 The only real complaint is the lack of a mechanism to hold the wheels together, as they tend to splay apart when carried. This is easily remedied with a cheap bungee cable, though.

You’d think at this size, the Fiido L3 would be lightweight but in fact it weighs a hefty 24kg. To be fair to Fiido, it skimmed 3kg off compared to its 27kg predecessor, the L2, so it is an improvement, even if objectively, it’s still heavy.

If you’re not particularly strong, the L3 won’t be the best choice for carrying on and off public transport, and the weight could become an issue is if you run out of battery mid-ride – although with such a high capacity and long (claimed) range, that won’t happen too often. More on that later. 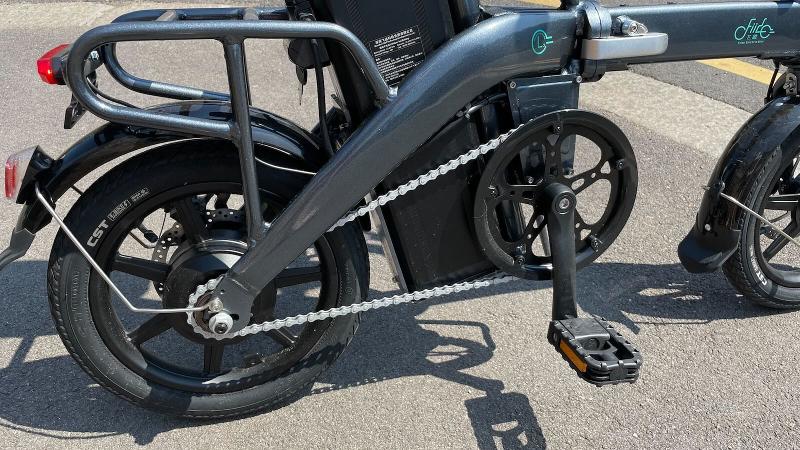 A XiongDa brushless 350W motor sits in the rear hub to powering the bike, and there are no gears. With a single-speed drivetrain it’s a bike suited to commuting.

That makes the top speed of 15.5mph / 25km/h all the more important too, as you won’t be able to use good ol’ leg power to increase speed beyond the EU-implemented limiter – even past the 8mph mark you’ll be pedalling too fast to keep up, as the ratio is optimised for slower speeds.

As with most electric bikes, the Fiido L3 can easily breeze past the 15.5mph limit (perfectly legal on private property), but there’s no information in the manual or on Fiido’s website on how it can be delimited. The combination of a 48V battery and 350W motor means this is more powerful than many rivals. 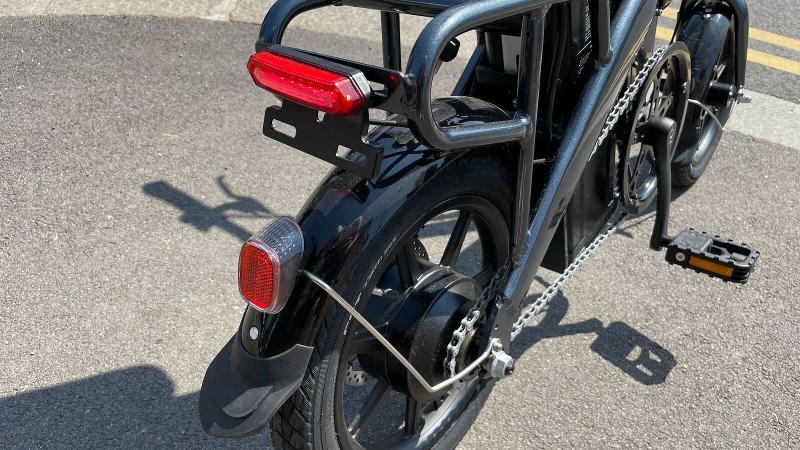 There’s a built-in LED brake light that’ll activate whenever you use the brakes, and an LED headlamp at the front which – like so many Chinese bikes – has an odd-sounding horn built into it that’s sure to make a few pedestrians jump out of your way. The light and horn have their own buttons (many bikes force you to read the manual to learn how to turn the lights on) but everything else is controlled by a small display attached to the handlebars.

It’s backlit and shows battery life, speed mode and current speed in km/h with no obvious way to switch to mph. It’s cheaper looking than some of the displays we’ve seen from bikes including Fiido’s own M1, but it does the job. 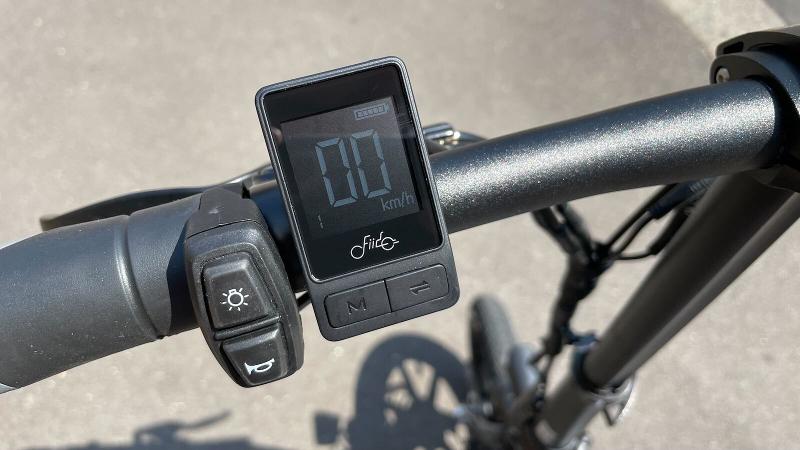 The buttons beneath the display let you change the power mode, and it’s also where you turn on the electric motor. It’s a two-part system, however, with a key required to enable the electrics before you can even turn it on at the display.

You’ll find a twist throttle to control acceleration on the right of the handlebar. It’s currently legal under UK and EU law to have assistance up to 3.7mph / 6km/h. The L3’s throttle will take you up to 15.5mph / 25km/h, without pedalling, and this makes it closer to an electric scooter or moped than an electric bike. 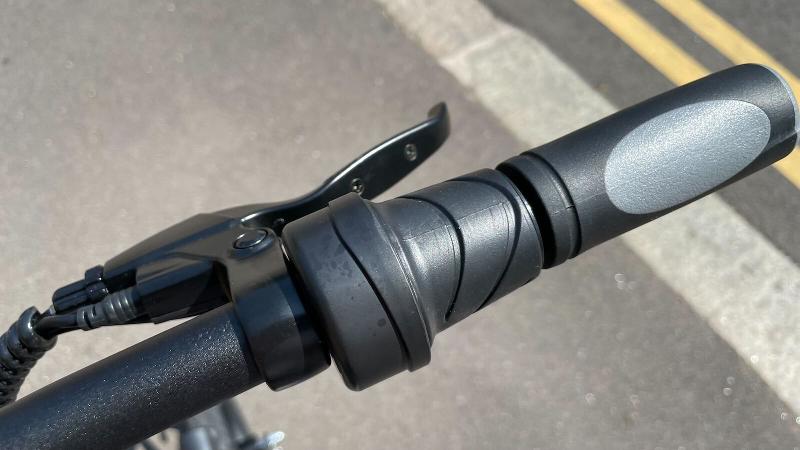 With such power available at the twist of a throttle, stopping power becomes just as important and the Fiido L3 doesn’t disappoint here either, with front and rear cable-operated disc brakes that’ll bring you to a complete stop rather quickly.

One of the main selling points of the Fiido L3 is the battery, a whacking great thing sat just behind the seat post. It’s a 48V unit with a 23.2Ah capacity that blows most bikes in our electric bike chart out of the water. The top-ranking VanMoof S3 offers a 36V 14Ah battery for comparison, and even other Fiido bikes, like the Fiido D11 and its 36V 11.6Ah battery, can’t compete.

That translates to impressive range claims, with Fiido suggesting that a 75kg rider can manage a whopping 200km on a single charge. That, of course, is in ideal conditions (25°C and a flat road), and using the lowest assistance mode while pedalling. 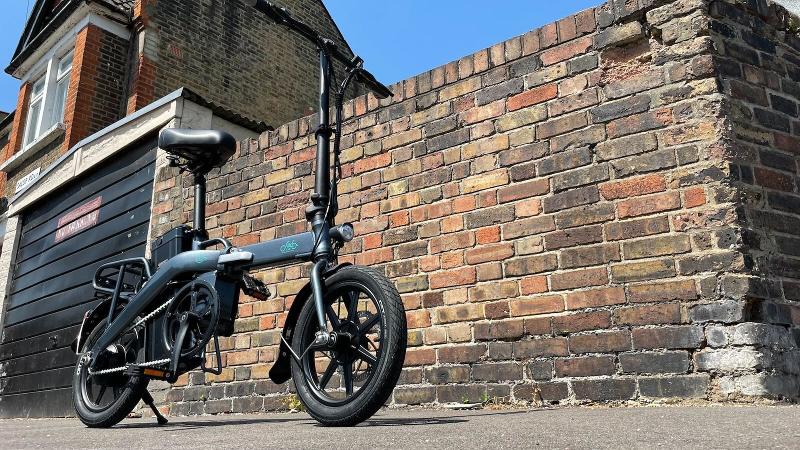 Actual range depends on a number of factors including speed, temperature, incline, weight of the rider and much more, making it hard to provide a consistent number. For me, a 95kg rider, the range isn’t quite as far, but I rode around 20 miles during my tests with near-constant top-speed acceleration and the battery had more than half its capacity left. The bottom line is that, even if you hoon around and put in virtually no effort, you can probably ride for a  good few days – possibly even commute for an entire week if you live close to work – without recharging.

That’s a refreshing change compared to most eBikes that need a top-up after every few rides, especially when making the most of the electric motor.

Of course, with such a high battery capacity, expect the charging process to take a while: around 6-7 hours, so it’s best done overnight.

To make things easier, you can lift the battery from the bike and charge it separately. It’s secured to the bike to prevent theft and is unlocked with the same key. 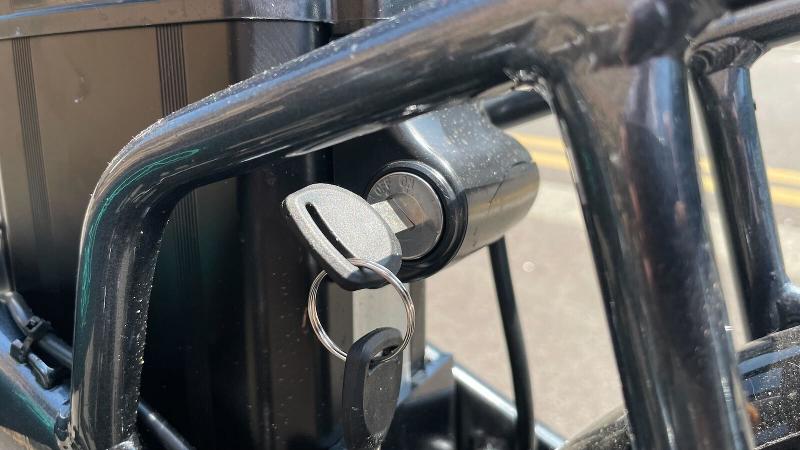 There’s plenty of torque available from the 350W motor at the twist of the throttle. It gets you moving incredibly quickly, taking no more than a few seconds to reach the 15.5mph limit on relatively flat city roads.

Of course, that does drop slightly when tackling hills and other inclines, but at no time during testing did I feel the need to pedal hard to give the bike an extra bit of power – although this will depend on your weight, as a 150kg rider (the limit for the L3) may feel like things are going much slower.

The ride is generally smooth, with the large, squishy seat providing a comfier riding experience than less-padded saddles, and there’s slight suspension available to make going over bumps and dips in the road a little more pleasant. 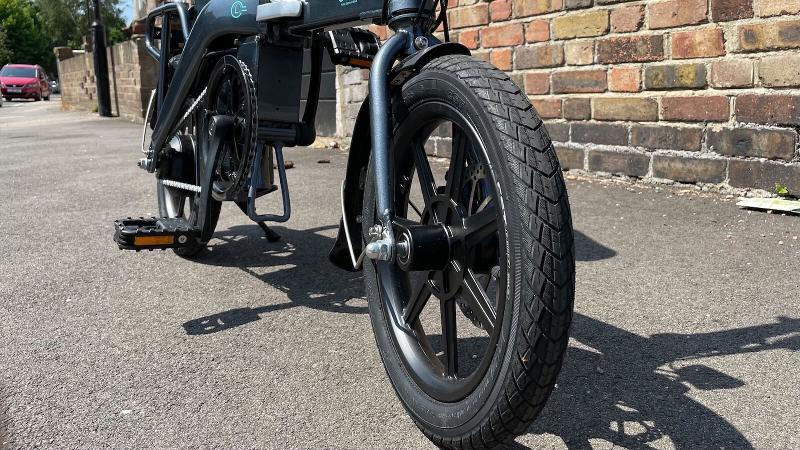 The only annoyance is that the front brake squealed (a high-pitched hum) constantly as the pads touched the rotor. I thought this was just poor adjustment from the factory, but Fiido had to send a second bike for testing due to an electronics issue with the first one, and that, too, had the same front brake issue. Searching online, it didn’t take long to find others with the same complaint.

It’s not a deal-breaker but it’s worth bearing in mind: you might need to get your Allen keys and do some adjusting when your L3 arrives.

It’s worth reiterating that the ratio Fiido has chosen for the single-speed system means there isn’t much point in pedalling when going at top speed. You’ll be pedalling way too quickly to keep up, and that means you won’t be able to power past the speed limiter as with 9-speed electric bikes including the FuroSystems Furo X Max.

That takes away a bit of the fun of riding a bike in general, especially if you don’t always want to rely on the electric motor to get you around, but it makes it easy to get from A to B without working up a sweat. It’ll depend on what you intend on doing with the bike, but if you’re looking to get fit while riding, you’d be better off looking elsewhere. 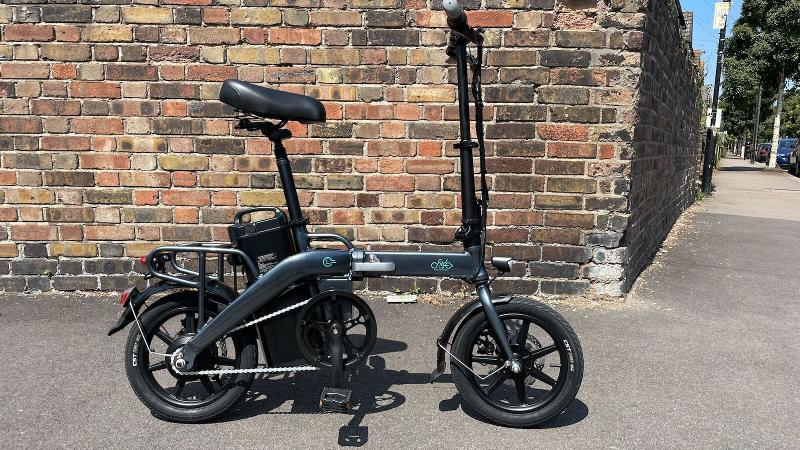 The Fiido L3 is cheaper than you might expect. It costs $999 directly from Fiido, with warehouses in the UK and US ready to ship the bike between 3-5 working days. Despite this, Fiido includes an $80 UK shipping fee, bringing the total cost to around £790 in the UK (which will vary depending on conversion rates) when you make the purchase.

Even with the added shipping fee, it’s still massively cheaper than the likes of the £2,899 Gocycle GX and £1,699 Furo X Max.

You can also buy it from UK retailers such as Bicycle Land for a bit more (£824.99) and this offers the reassurance of buying from a local retailer.

There’s a one-year warranty and Fiido has a UK-based repair centre that should handle most issues, which should give most consumers more confidence in buying from the China-based brand.

The Fiido L3 is, in some ways, a paradox. It’s a foldable city bike designed for short journeys, but with a huge battery capable of up to some 120 miles.

The only sensible explanation for this choice is for riders who don’t want the hassle of constantly recharging their bike’s battery and just want to be able to get around town all week without running out of juice. In that respect, it’s perfect for short-distance couriers.

Some will prefer to opt for a lighter bike and sacrifice some range, but at this price, you’re effectively only paying for that extra range in weight. So if you can live with that, it’s great.

It’s quick to accelerate, and quick to stop thanks to those competent brakes. The squeaking from the front brake will quickly become annoying if you can’t solve it, though.

The only real downside is that low-geared ratio means you can’t power past the 15.5mph speed limiter like you can with most other electric bikes – even others with similar single-speed setups.