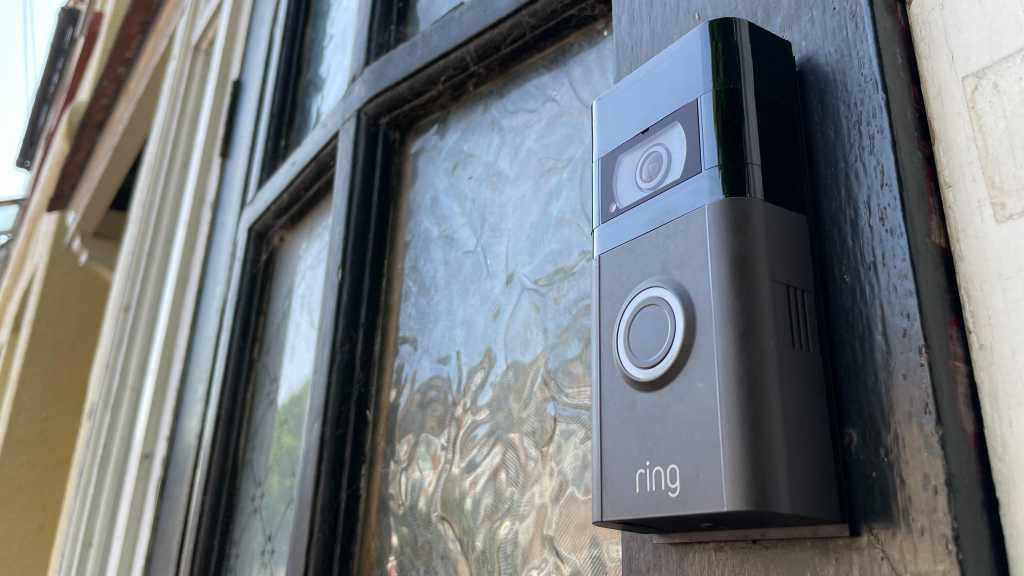 The Ring Video Doorbell 4 may not be a huge upgrade compared to its predecessor, but the introduction of upgraded pre-roll technology is another strength of an already competitive doorbell.

Ring’s Video Doorbell 4 might look like every smart doorbell that came before it, but that doesn’t mean there’s nothing new. The introduction of upgraded pre-roll technology previously exclusive to the ‘Plus’ range means the latest doorbell can capture four seconds of video from before motion has been detected – a rarity for a battery-powered camera of any kind.

Is that enough to tempt users to upgrade, or is it simply a nice touch for those buying a Ring doorbell for the first time? Carry on reading to find out.

Looking at the Ring Video Doorbell 4, you’d struggle to tell the difference between it and last year’s Ring Doorbell 3 Plus – and that’s because the two are essentially identical in design and build. The classic Ring Video Doorbell aesthetic is present and accounted for, including the signature glowing LED ring around the button that appears whenever you ring the doorbell.

The Doorbell 4 measures in at the same 128 x 62 x 28mm, making it a chunkier option than the wired-only Ring Video Doorbell Pro 2, mainly due to the removable battery that slides out of the bottom. 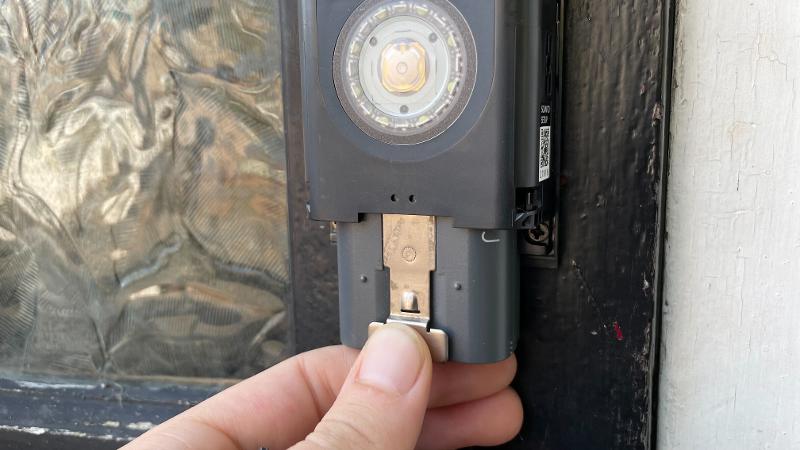 The battery system may be annoying for some, but as long as you have a spare battery charged and ready to go, it’s easy enough to swap one out for the other with no charging downtime. You’ve also got the option of investing in a Ring-compatible solar panel, both of which are sold separately.

You can also hook up the Ring Video Doorbell 4 to the mains if you’ve got existing doorbell wiring, but in that case you’d be better off choosing one of the wired-only models such as the Video Doorbell Pro 2 with more advanced features like 3D motion detection not possible with the battery-powered doorbell.

The physical installation of the Doorbell 4 is simple enough; you simply screw the mount to the doorframe or exterior wall of your home, and screw the Doorbell into place on the mount. In fact, if you’ve got an older Doorbell already installed, you can install the new model onto an older faceplate, making things even simpler. 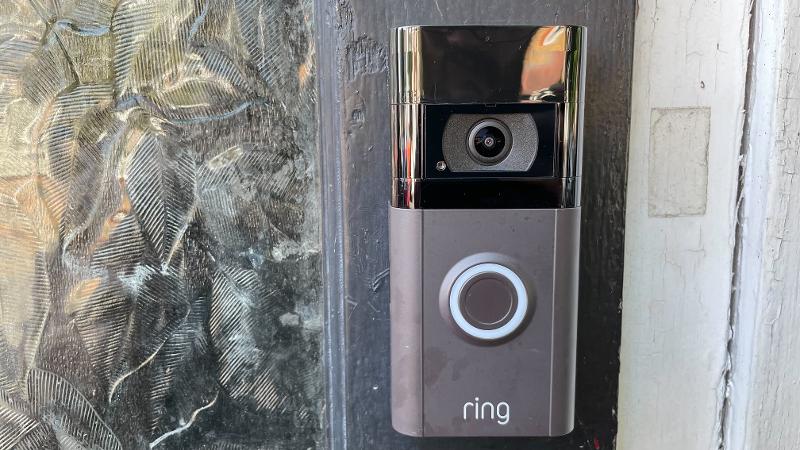 Everything you need for installation is in the box. The bundled kit includes a wedge if you need to angle the camera left or right along with the screws, fixtures and a screwdriver to screw in the security-focused Torx screw that stops someone from simply unscrewing your doorbell and running off with it.

But while the previous-gen Ring Video Doorbell 3 Plus came with two faceplates in the box – silver and black – the Doorbell 4 offers only one, either silver or black depending on which you choose at purchase.

That’s a little frustrating on the surface, but you can claim the second faceplate free of charge once the product has been registered. It’ll save on wasted plastic, I suppose!

The software side of things is just as simple; using the Ring app to set up and scan the barcode on the side of the box, the Doorbell 4 was connected to my home Wi-Fi within minutes, finishing up with configuring my motion zones, motion sensitivity and Chime alerts.

The Ring Video Doorbell 4 features 1080p video with HDR support, and the 160-degree horizontal field of view means you can capture a lot of the environment. However, unlike the 150-degree vertical of the Ring Video Doorbell Pro 2 and competing Nest Hello, you likely won’t get a vertical full-body shot of anybody that appears at the door.

Video quality is sharp during the day, making it easy to identify couriers, door-to-door salesmen and just about anybody else that rings your doorbell, and using the built-in mic, you can talk to them via the Ring app for iOS and Android.

There’s also built-in black and white night vision, which although isn’t quite as clear as what’s produced by the Pro-level doorbell, is sufficiently clear for identification and interaction purposes.

Doorbell notifications are near-instant in my experience with the Doorbell 4, but it’ll likely depend on your internet connection – 5GHz Wi-Fi tends to fare better in this respect if it’s available.

There’s a Chime Pro available separately that, as well as acting as a traditional chime to alert you to somebody at the door, provides a Wi-Fi hotspot for doorbells slightly out of Wi-Fi range. 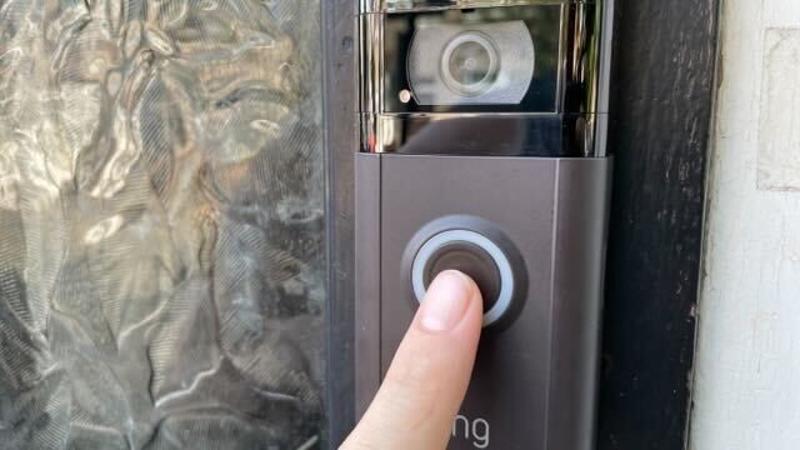 The Video Doorbell 4, like its predecessors, can detect motion and record video to review at a later date, although this requires a Ring Protect subscription. However, at just £2.49/$3 per month for a single device or £8/$10 a month for unlimited devices, it’s one of the cheaper security camera subscriptions available right now (not as cheap as Nest’s Aware V2, mind), and it’ll display any motion alerts and missed rings in timeline view in the app.

There are plenty of extras that help the Doorbell 4 shine, including motion zones that let you select which part of the video feed should be monitored for motion – ideal if you live near a busy road – and a People Only detection mode that should negate motion from trees blowing in the wind and cars driving by.

It’s not the perfect option, however. My front door is less than 2ft away from the street, and even with minimal motion zones and the advanced motion detection turned on (which attempts to increase accuracy) I was still plagued by constant motion notifications from passers-by and cars.

It shouldn’t be so much of an issue if you have a larger space in front of your house, but it’s worth bearing in mind for city-dwellers like me.

You can disable motion notifications if they get on your nerves, and you can even disable motion detection altogether if it drains the battery too quickly, although you won’t be able to spot if anyone is lingering by your front door without them ringing your doorbell.

One of the only upgrades present on the Ring Video Doorbell 4 is the upgraded Pre-Roll technology. Available in the Video Doorbell 3 Plus, the tech constantly captures four seconds of video, which is then added to the front of any motion or ring event. Considering constant recording is a bit of a rarity in a battery-powered camera, it’s a great addition to Ring’s roster of features.

The pre-roll tech is much the same this time around, but with an upgrade from black-and-white to colour video, and the resolution has seen a slight jump to around 720p too. It’s a useful feature, helping you work out what might’ve triggered a motion alert if there isn’t an obvious cause in the main recorded clip.

There are also environmental factors like weather, temperature and the frequency of motion detection that contribute to overall battery life, making it hard to give a reliable battery life figure.

Based on my usage, on a busy London road with 50+ motion alerts per day, you’ll get around a month of use before it needs a top-up. Those without so much going on nearby could squeeze more out of the battery, with Ring claiming 6-12 months from a single charge, but I’m going to say that that’s a very generous estimate.

The Ring Video Doorbell 4 is available to buy now from Ring in the UK and US for £179/$199 respectively, and you can also order it directly from Amazon and Argos in the UK at the same price. The catch? The doorbell is currently sold out at both Ring and Amazon, with a shipping time of around 7 – 9 weeks at the time of writing.

If you can’t wait that long, take a look at our choice of the best smart doorbells for great alternatives to Ring’s latest entry.

While there aren’t a lot of upgrades compared to the last-gen Ring Video Doorbell 3 Plus, the Ring Video Doorbell 4 offers a solid smart doorbell experience with crisp 1080p HDR video and night vision capabilities, a plethora of motion and privacy-focused options in the app and decent battery life – as long as you don’t live on a busy road.

The only downside is the monthly Ring Protect subscription, but at £2.49/$3 per month, it’s much cheaper than some alternatives.

The camera angle may not be as expansive as Ring’s Video Doorbell Pro 2 and it might lack the advanced 3D motion detection on offer from the premium model, but it ticks most boxes for a smart doorbell.