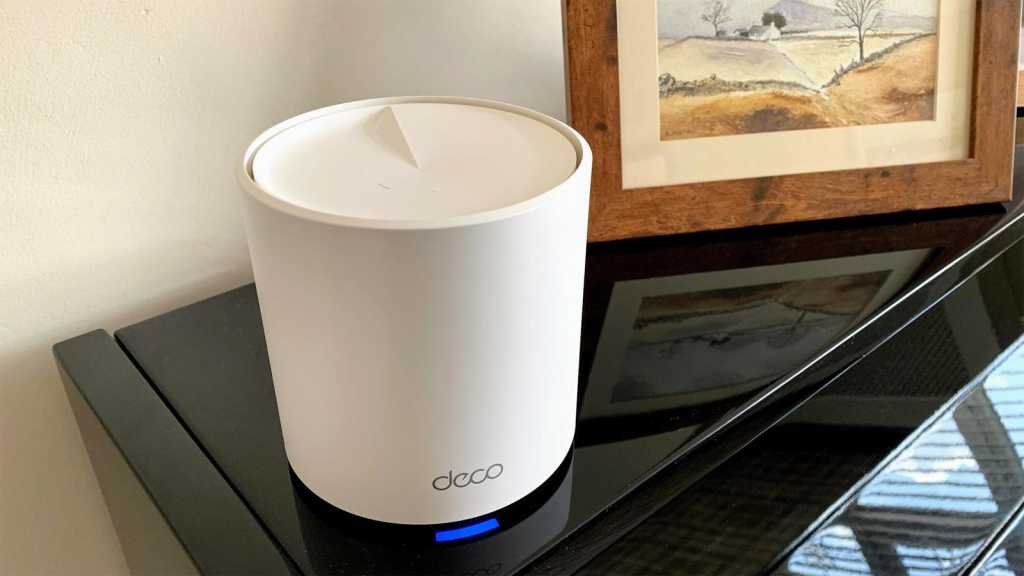 The Deco X60 is a good-value mesh Wi-Fi system for those looking for something future-proof without breaking the bank.

If you’re trying to choose which mesh Wi-Fi system to buy, you’ll no doubt be juggling price, features and coverage. It’s tempting to think that a Wi-Fi 6 system must be better than Wi-Fi 5 and that you’d be a fool not to buy one as it’s the latest standard.

The short answer is that you’d be right. If you can afford it, get the latest standard as you’ll benefit later as you acquire more Wi-Fi 6 devices. The Deco X60 looks quite pricey compared to many Wi-Fi 5 mesh systems, but as it’s dual-band rather than tri-band, it’s not even close to the most expensive tri-band options (such as the Netgear Orbi).

As well as being a bit more affordable, the X60 also claims to provide 7,000 square feet of Wi-Fi coverage, or 650m². That’s huge, and far bigger than even large houses (in the UK at least).

The X60 units themselves are inoffensive and, being white, shouldn’t look too conspicuous in your lounge, kitchen, bedroom, study  or wherever you have to place them.

They each have two Gigabit ports which can be used to connect PCs or other devices that don’t have Wi-Fi to your home network, but you can also use them to connect the X60s themselves together.

This is called Ethernet backhaul, and it’s different from other TP-Link systems which have built-in powerline and use your home’s mains power wires for backhaul.

So, unless your home is wired for Cat5e or Cat6, Ethernet backhaul won’t be practical and – in most cases – is unnecessary as the units are designed to communicate with each other using Wi-Fi.

As mentioned, there is no third Wi-Fi channel which high-end mesh systems have for communicating with each other. Instead, the X60 uses the same channels for everything: delivering an internet connection to your gadgets and for talking to each other.

You might use Ethernet backhaul if you have a garden room / garage far from the main house, though.

At the front of each X60 node is an LED that tells you its status: you want a green light to show everything is working ok.

The X60 is designed to connect to an existing router or modem: it doesn’t have a modem built into it, so you’ll use the supplied ethernet cable to connect one of the units to the box that currently provides your Wi-Fi (and it’s a good idea to disable its Wi-Fi afterwards).

The Deco app walks you through the setup. It’s not difficult, but it’s not as user-friendly as other mesh systems. It asks you for technical information about your broadband connection which others don’t, and it shouldn’t need that in most cases anyway.

Once you’ve got the first unit broadcasting a Wi-Fi network, you can plug in the others and they’ll automatically appear in the app and will broadcast the same network name so you can roam around your house and your phone or laptop will automatically join the unit with the strongest signal (in theory, anyway).

If you buy additional X60 units, you’ll need to add these manually as they won’t appear automatically.

While the automatic part of the process makes it simple, there’s no guidance as you get with other systems as to whether you’ve placed a unit in an appropriate location, one that’s neither too close or too far away from another.

If it’s too far away, it will simply fail to appear or you’ll see a weak Wi-Fi symbol when you tap on a unit in the app.

If you have Alexa devices, there’s a TP-Link Skill you can enable. Unfortunately, you can’t do a lot with the X60: just enable or disable QoS, the guest network, the LEDs and Night Mode. It would be great to say “Alexa, pause the internet for Craig” or similar, but you can’t.

For the most part, the app is very good. Initially, it’s confusing to have to tap Internet to see the list of Deco units, but that is where you can check the status of your nodes and see which devices are connected to each one.

It’s possible to prioritise the internet connection to specific devices, once you’ve told the app your upload and download speeds.

You can also enable a guest network, which allows you to have a separate SSID and password which will give guests an internet connection, but no access to other devices on your network.

More impressive is the parental controls. Usually these are worthless compared to a dedicated app, but in this case, they’re actually quite useful. You can create profiles for your kids, set a total amount of Wi-Fi time per day (this can be different on weekdays to the weekend) and the hours between which they can use that time (this part is flawed).

Best of all, you can then assign up to 16 devices to them, which prevents them using their daily limit on one device and then picking up another.

Obviously, being router-based, what you can’t do is to set time limits per app or by type (games, web browsing etc) but there are web filters which are set up for child, pre-teen, teen and adult that automatically block certain categories.

You can block or allow specific websites and even some popular games, such as Roblox and Minecraft.

Once set up, you can see what your child has been up to on a particular day, but the list isn’t all that helpful as you can see in the right-hand screenshot above. Not only does it display unfriendly names, the times don’t add up. In this example, it says TikTok has been used for 1.4 hours (it wasn’t). It lists a load of web services associated with TikTok and other apps (Qustodio) which run in the background and are not being ‘used’ as such. It also lists 32 minutes of WhatsApp use, which can’t be used at the same time as TikTok.

One useful feature, though, is being able to pause a child’s internet access at any time with a single tap.

Impressively, the Deco X60 includes subscription-free malware protection from Trend Micro. As well as antivirus, it also protects devices that can’t run antivirus from attacks and its quarantine feature can prevent infected devices from phoning home (to the hackers) with sensitive information.

The app notifies you when a new device connects to the network. This can be useful, but it’s very annoying when you first set up the system.

None of this is of any interest whatsoever if the system doesn’t perform well. Thankfully it does.

It isn’t the last word in speed, but if you’re currently using a single ISP-supplied router, the Deco X60 will feel like a massive improvement.

When I’m not reviewing a mesh system, I have five tri-band Linksys Velop Wi-Fi 5 nodes set up, the extra pair to cover a detached garage which needs a signal for a security camera and the bottom of the garden.

I tested the three-unit X60 kit and found it delivered a usable Wi-Fi signal to virtually the whole property, including the garden. The Nest camera on the garage complained that a weak Wi-Fi signal was causing video quality to drop and a couple of LIFX bulbs in outdoor lights refused to connect at all, but in and around the house, the signal was more than acceptable.

If you’re forced, as I was, to place a node a little too far away from the others (in order to connect a PC without Wi-Fi) then you may find the connection speeds too slow for good-quality video calls, but as ever, your experience will depend upon the size, layout and construction of your home.

Even if you don’t own any phones, laptops or other gadgets with Wi-Fi 6, you’ll still benefit from the various technologies – that I won’t get into here – which allow the Deco X60 to provide great coverage.

You’ll only see the fastest transfer speeds on Wi-Fi 6 devices, but most people simply want a good internet connection in every corner of their home for video streaming, gaming and Zoom calls.

And that’s exactly what the X60 provides.

If you do want those huge claimed speeds, you’ll probably be disappointed. In order to get the full 2400Mbps that TP-Link shouts about, you’ll need a device that supports a 160MHz channel width (so-called 2×2 Wi-Fi 6).

Even though I had one to hand, I could not get it to connect at speeds faster than 1200Mbps. Unfortunately, TP-Link offers virtually no Wi-Fi settings in the Deco app, and no way to verify or change the channel width.

So, either TP-Link is fibbing about the Deco X60 supporting 160MHz or it was defaulting to 80MHz (and therefore 1200Mbps) yet offering no way to force it to 160MHz.

What this meant was that at a distance of about 1.5m from the main unit, the Wi-Fi Speed Test app I use to test mesh systems reported a speed of precisely 1200Mbps.

That’s seriously impressive, and about 25% faster than any Wi-Fi 5 system I’ve tested.

Moving to another room, around 8m from the router, speed only dropped to 959Mbps.

At the garage security camera, I measured an average speed of 136Mbps, but clearly the signal fluctuates there, since 136Mbps is twice as fast as my broadband speed and far in excess of what a security camera needs in terms of throughput.

See our roundup of the best mesh Wi-Fi systems for alternative recommendations.

If your home is wired for Ethernet, the Deco X60 is an especially tempting choice but even if it isn’t and you’re looking for a future-proof mesh system that’s ready for Wi-Fi 6 devices, it’s still a great option.

Yes, there are faster kits which add a third 5GHz band, but they cost a lot more. At this price, the X60 offers good speed and impressive coverage.