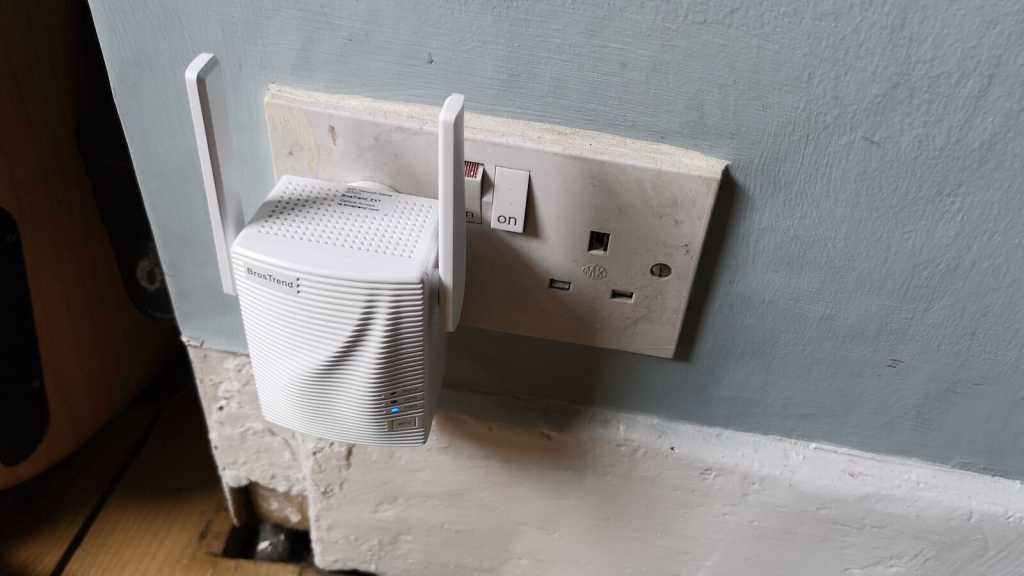 Good performance for a reasonable price, the BrosTrend AC1200 will do in a pinch to get Wi-Fi to that dead spot in your house.

BrosTrend is a home networking brand that’s not as well known in the UK, but nevertheless, the BrosTrend AC1200 is currently being promoted all over Amazon, and comes with a low price tag to boot. At £35, it promises to patch holes in your home’s Wi-Fi coverage with relative ease.

When will BrosTrend be famous? We can’t answer that, but we can tell you if the AC1200 is a bargain buy or not.

The BrosTrend AC1200 is another cheap and cheerful Wi-Fi extender that’s currently enjoying healthy promotion all over Amazon.

You get a dual-band Wi-Fi 5 booster with an Ethernet port, and a 1m-long Ethernet cable included in the box, which is nice, as you’ll be able to hook up devices like set-top boxes, laptops and desktop PCs which will benefit from a more stable connection.

Sadly, there’s no mains passthrough, so you can’t plug in any other devices that need mains power here, meaning you’ll need an extension cord, or just have to dedicate one mains socket in your home to the BrosTrend AC1200.

This is another Wi-Fi extender with a near identical build and spec to the Tenda A18 and Rock Space AC1200, likely because BrosTrend grabbed the same job lot of Wi-Fi extender chassis from the same factory as the other two brands did. That doesn’t mean that performance will be exactly the same – the proof will be in the testing.

The set-up process for the BrosTrend AC1200 is very straightforward, and the same as setting up any Wi-Fi extender of this ilk.

Firstly, you’ll plug it into a mains socket in the same room as your router, to ensure that when you’re pairing the two devices, the wireless connection between your router and the Wi-Fi extender will be strong.

While there’s no mobile app to help you get connected, it’s easy enough to set up without one. WPS is present here if you want to securely connect to your router quickly, but using the web-based UI is a safer bet.

Once the BrosTrend appears as a device you can connect to from your phone or laptop (or whichever device you’re setting this up on), you’ll be asked to create an admin password. Then you’ll need to pick your home network out from a line-up of available SSIDs so the BrosTrend AC1200 knows which network you want it to ‘extend’.

Once you’ve connected the BrosTrend AC1200 and named the SSIDs, you’ll have finished the pairing process. You’re now free to unplug and set it up in a room somewhere between where you can still get a decent signal from your router, and the corner of your house where you typically can’t get a decent Wi-Fi connection.

I used the same set-up for testing here as I did with the TP-Link RE305, Tenda A18 and Rock Space AC1200, and set the the BrosTrend AC1200 up in a spare room that’s one storey and a room along from where my main router (a Netgear RBK750) sits, hooked up to a Virgin Media Super Hub in modem mode – I’m on a 200Mbps Virgin Media service.

Unsurprisingly, I wasn’t able to pick up a 5GHz signal in the room furthest away, but 2.4GHz coverage was available everywhere. As you can see from the results below, there’s quite an uptick in speeds in places compared with just relying on a single router:

Speeds recorded on both phones in tests closer to BrosTrend AC1200 were very good, clearly offering a boost in performance compared with using one router on both the 2.4GHz and 5GHz bands.

Further away, things were less good, but again, this is to be expected, as the 5GHz frequency can’t really go the distance in the same way that 2.4GHz can.

The BrosTrend AC1200 is available to buy now, with £37.99 listed as the RRP on BrosTrend’s site, although most places tend to sell it for around £35.

No outlets in Australia carried stock of the BrosTrend AC1200 at the time of writing.

The BrosTrend AC1200 is very good, considering its low price and lowly specs. There’s no mobile app which is a shame but an Ethernet cable is included in the box which is a nice touch.

Much like the Tenda A18 and Rock Space AC1200, you are not going to get whole-home coverage here, but for plugging gaps in your home’s Wi-Fi coverage, it should do the trick, and it won’t hurt your bank balance much.

Just note that the very similar Tenda A18 is available for less money.