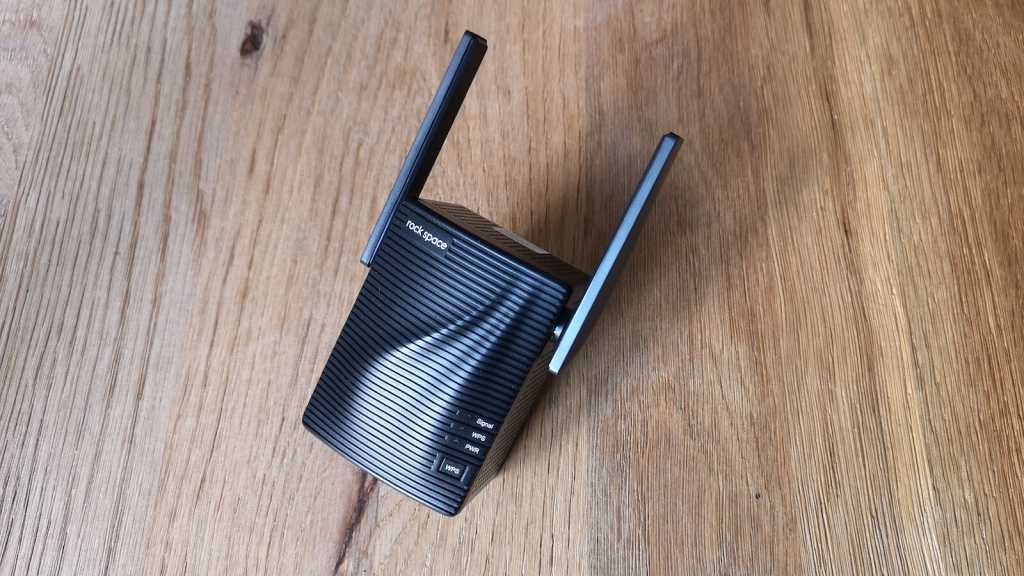 Low price, ease of use, and plug ‘n play set up make the Rock Space AC1200 an attractive proposition, but there’s no app and you can spend less still.

The Rock Space AC1200 is cheap Wi-Fi 5 extender that’s priced at around £30. While it’s a relatively unknown brand here in the UK, the AC1200 is currently being heavily promoted on Amazon, and therefore may be a tempting buy for Prime account holders who can quickly grab this and get it delivered the next day.

While it’s very cheap and easy to get hold of, here’s how it stood up during testing.

The Rock Space AC1200 is a fairly typical-looking Wi-Fi extender, except that it’s black instead of the usual white and light grey.

It features twin external antennas which flip upwards, a single Ethernet port (10/100Mbps RJ45) underneath, WPS button, and the usual status lights for signal, WPS, and power. There’s no passthrough for mains power, so wherever you install the Rock Space AC1200 will be taken up by that device.

The chassis is almost identical to that of the Tenda A18 – and the web UI for the setup is virtually identical – but they’re not quite the same thing.

For one, the spec sheet claims that both the Rock Space AC1200’s antennas are Wi-Fi 5-compliant, and in testing, that claim stands up. Secondly, the Rock Space brand is owned by Shenzhen Renqing Excellent Technology Co and Tenda is owned by Tenda.

These Wi-Fi extenders might have very similar jackets, but they’re a bit different underneath.

Setting up the Rock Space AC1200 is as simple as any cheap Wi-Fi extender – plug it into a mains socket in the same room as your main router to complete the initial pairing, and once that’s done, you’re then free to set it up wherever you like in the home.

You can pair everything via WPS, which is achieved by simply pressing and holding the WPS buttons on both your router and the Rock Space AC1200, but your best option is to use the web-based interface, by heading to re.rockspace.local on your browser once the extender’s SSID appears on your device’s list of available wireless networks.

From there, you’ll be able to assign an admin password for when you need to access the Rock Space AC1200’s control panel, and then pick your wireless network from the list which appears, and input your main network’s password. Once the Rock Space AC1200 has connected to your router, you can choose to name the extended SSID.

You’re then free to unplug the Rock Space AC1200 and set it up in a room equidistant to your main router and your home’s Wi-Fi not-spot.

I set the Rock Space AC1200 in a spare room one floor up and one room along from where my main router, a Netgear RBK750 sits, connected to a Virgin Media Super Hub that’s set to modem mode. My Internet service ( Virgin Media M200) regularly gives me between 180-210Mbps, and I can get close to these speeds over Wi-Fi when working in the same room as the router.

I wasn’t able to maintain a stable connection on the 5GHz band two rooms away, which is hardly surprising, given that the 2.4GHz frequency is better at penetrating physical barriers over distance.

The results below show the difference using the Rock Space AC1200 made when working in Wi-Fi not-spots:

Performance here is broadly on par with what I saw with the TP-Link RE305, great 5GHz speeds if you’re within range, if not, you’re going to be shunted over to the slower, but more widely-reaching 2.4GHz radio frequency, and on both devices, in both rooms, speeds were comfortably within the 80-90Mbps range.

That’s about good enough for you to be able to work remotely a couple of rooms away, but you just won’t benefit from those higher speeds.

The Rock Space AC1200 is available to buy directly from Rock Space now for US$45.99 – regardless of where you’re accessing the site from, all prices are listed in US dollars.

The only other UK vendor selling these at the minute is OnBuy, which wants £60.21 for a Rock Space AC1200, which is completely unreasonable.

In the United States, you can get a Rock Space AC1200 from Amazon for a far more sensible $45.99, the same as Rock Space’s own RRP.

It’s currently not in stock from any other U.S. retailers so again, your best bet is to try eBay, although again, some sellers are trying their luck with prices there.

No consumer electronics vendors in Australia stocked the Rock Space AC1200 at the time of writing.

The Rock Space AC1200 is a very cheap and easy to set up Wi-Fi extender which, in the right circumstances, could be a good short term Wi-Fi solution.

For £30-odd, you largely do get what you pay for, and so as long as you’re working somewhere close to the extender, and you’re not expecting miracles, it’ll just about do, but you might want to hold on to your money and put it towards something a bit more useful like the TP-Link RE505X.

Alternatively, the Tenda A18 is almost identical and cheaper.