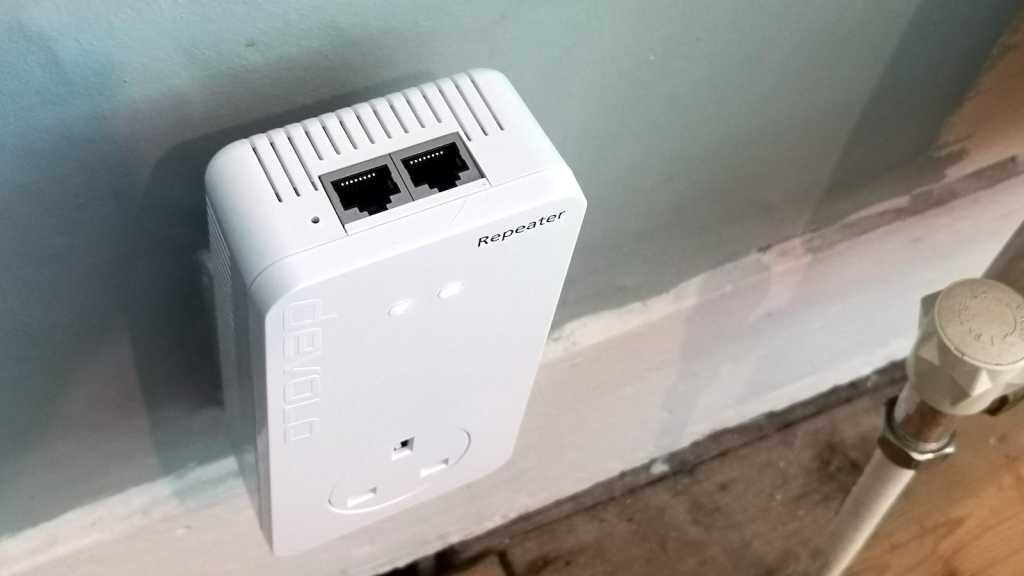 The Devolo WiFi AC Repeater Plus is a solid and speedy Wi-Fi 5 range extender. However, it’s hindered by a slightly frustrating app and a higher price than rivals.

The Devolo WiFi AC Repeater Plus is a rather large Wi-Fi extender with a mains passthrough socket at the front, and two Ethernet ports at the top. In terms of looks, it’s virtually identical to the nodes from the Devolo Mesh WiFi 2 system with a very similar design and the same dimensions.

There are two backlit buttons on the front, which act as status lights for active Wi-Fi connections to your devices, and your router, respectively. The button with the Wi-Fi symbol can also be used to pair the WiFi AC Repeater Plus with other compatible Devolo devices to form a mesh network, while the Home button can also be used to pair with your router via WPS, for quick set-up.

Setting everything up is straightforward, but takes a little longer than most plug ‘n play Wi-Fi extenders, which can be ready in less than five minutes – the Devolo WiFi AC Repeater Plus took closer to fifteen.

While it’s good to know that the process is thorough, waiting for the red LED behind the Home icon to change from red to white feels like you’re waiting for the stars to align. It’s definitely worth sticking the kettle on before you start to install this.

As well as pressing the WPS buttons on the extender and your router to pair everything, you can use the Devolo Home Network App for iOS and Android if you’d prefer to be guided through the installation process.

The app will tell you if the place you’re setting the extender up is either too close, or too far away from your router for the signal to be effective, and let you know when it thinks you’ve picked a good spot. After you’ve found this, it’s simply a case of waiting for the WiFi AC Repeater Plus to connect to your phone.

By default, it shares the same network password as your router, but you can change this in the settings, not without some difficulty, mind. Twice I tried to change the network password, only for the app to crash both times. On the third attempt, I was able to successfully do it, but it took a long time for that small change to be applied and for the WiFi AC Repeater Plus to restart, which took another ten minutes or so before I was back online.

To see how the Devolo WiFi AC Repeater Plus performed versus using a single router, I used the same testing criteria I did when testing the TP-Link RE505X, Tenda A18, TP-Link RE305 and BrosTrend AC1200.

I set the Wi-Fi extender up in a room one floor up and one room along from where my main router, a Netgear RBK750, sits. I subscribe to the Virgin Media M200 service, which usually gives me between 180-210Mbps most times of the day.

The first set of tests took place in a room next to the room where the WiFi AC Repeater Plus was installed, with one brick wall in between, and the second, two rooms away, with two non load-bearing plasterboard walls in between.

I used the WiFi Speed Test Pro app for Android to record Wi-Fi link speeds, as well as download and upload speeds, when connected to both the WiFi AC Repeater Plus and the main router, for comparison’s sake. The results below are averages:

You can see from the results that the Devolo WiFi AC Repeater Plus makes a definite impact. Speeds, especially on the 5GHz band, are impressive, although the signal wasn’t powerful enough to reach into a Wi-Fi dead zone two rooms away.

That’s not a slight on the WiFi AC Repeater Plus though – with the exception of the TP-Link RE505X, none of the Wi-Fi extenders I’ve tested recently has been able to do that, and in the RE505X’s case, it’s a Wi-Fi 6 range extender, and it was only able to talk to the Wi-Fi 6 client two rooms away, so that says more about the benefits of Wi-Fi 6 and the properties of 5GHz than anything else.

Having said that, the speeds here, while good, aren’t massively better than what you can get on Wi-Fi extenders for half the price, which are also far easier to set up and use.

The Devolo WiFi AC Repeater Plus is available to buy now for £59.99.

Few other retailers stock this at the moment – if none of the others are available, Quzo is also selling the WiFi AC Repeater Plus, albeit for £65.05.

At the time of writing, no retailers in the US or Australia had the Devolo WiFi AC Repeater Plus in stock.

The Devolo WiFi AC Repeater Plus offers good speeds, but not significantly better than what you get with a cheaper Wi-Fi extender, and the Devolo Home Network App, which should make things easier to manage and configure, is actually tricky to use and prone to crashing.

At this price, you’d be better off investing in something like the TP-Link RE505X as the main benefits here are similar to a powerline adapter.