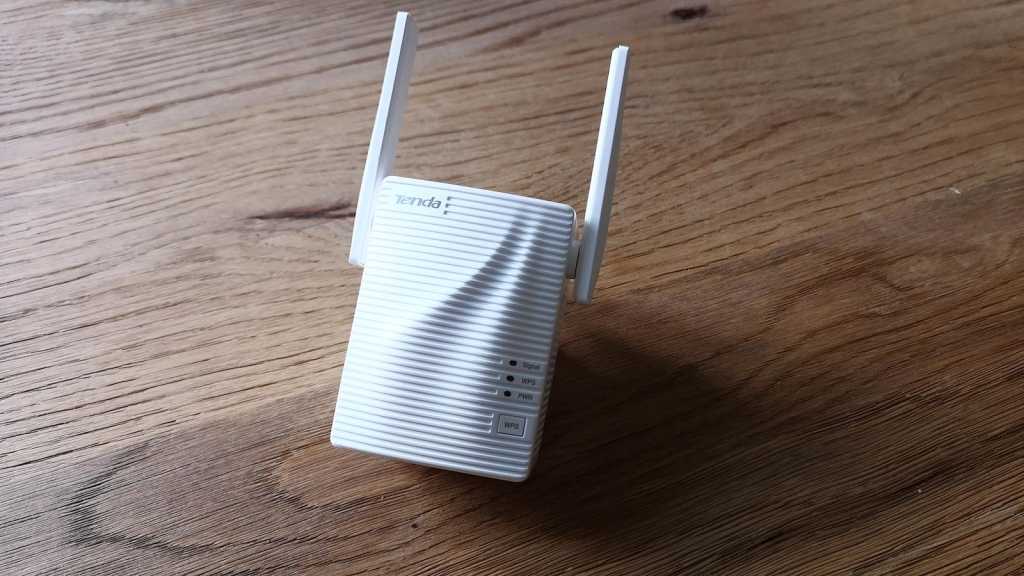 Very cheap and cheerful, the Tenda A18 AC1200 Wi-Fi repeater is useful in a pinch for boosting signal in areas where a single router can’t help, but it’s not without its limitations.

The Tenda A18 AC1200 Wi-Fi Repeater is one of the cheapest Wi-Fi extenders on the market, offering dual-band Wi-Fi support for around £25. An Ethernet port means you can connect devices that’d benefit from a wired connection, too.

The Tenda A18 AC1200 is a small unit which plugs straight into a spare mains socket and features two antennae which flip up and make it look like a small robot that’s trying to catch a tiny rugby ball.

In terms of extra connectivity, there’s a single Ethernet port (10/100 Mbps RJ45) so you can plug in a laptop, games console, media streamer and so on – read our best Ethernet cables feature for more information on choosing the right cables.

There’s no mains electricity pass through, however, so whichever mains power socket you use will be dedicated to the Tenda A18 AC1200.

Installing the Tenda A18 AC1200 is easy. For the initial set-up, Tenda recommends that you plug the A18 AC1200 into a mains socket in the same room as your existing router. This way, you’re guaranteed a strong wireless connection between your router and the extender for that initial pairing session.

You can choose to pair the Wi-Fi extender with your existing router using the WPS push button, or, for more control, including the ability to rename the SSID of the Tenda A18 AC1200, use the web-based user interface.

The web UI is easy to follow, if a little basic-looking. You’ll be asked to create a login/admin password for the Tenda A18 AC1200 itself during set-up, as well as create an SSID.

Once that’s all done, you’re free to take the Tenda A18 AC1200 out from the mains and plug it in where it’s needed in your home, ideally the midpoint between your router and the not-spot.

My router – a Netgear RBK750 – is set up in my living room, close to my Virgin Media Super Hub that’s set to modem mode, which is about a foot away from the master socket. I’m on a 200Mbps Virgin Media Internet service.

Below are average Wi-Fi speed test results taken on a Huawei Mate 10 Pro using the WiFi Speed Test Android app, the same app we use at Tech Advisor for testing wireless home networking equipment like routers and mesh Wi-Fi systems.

Tests were performed in two rooms, one adjacent to the room where the Tenda A18 was installed, and the other two rooms away:

5GHz speeds, where I could pick them up, were very good, especially on the older Wi-Fi 5 client which is a little odd. 2.4GHz were less impressive overall, something I’m chalking up to the fact that the Tenda A18 only supports 802.11n (aka Wi-Fi 4) on 2.4GHz.

The top speed of Wi-Fi 4 on 2.4GHz is 150Mbps, hence why I couldn’t pick up anything faster than that here. Speeds on the 5GHz were more in line with what I’d expect from a Wi-Fi 5 device, so that’s reassuring. Limited range means that overall, the Tenda A18 AC1200 is only effective if you’re working a short distance away from the device.

The Tenda A18 AC1200 Wi-Fi Repeater is available to buy now. It’s listed on Tenda’s site here, but note that you can’t currently buy it directly from Tenda.

If either of those places are out of stock, there’s Box although, at the time of writing, the Tenda A18 was priced a little higher – £36.99.

The Tenda A18 AC1200 Wi-Fi Repeater’s low price is very attractive and hard to argue with.

While it won’t burn a hole in your wallet, it also won’t give you a decent speed boost everywhere, so be mindful of its limitations before you snap one up.

If there’s one area or room in your home which should be well-covered by your main router but isn’t, then the Tenda A18 might plug the gap.