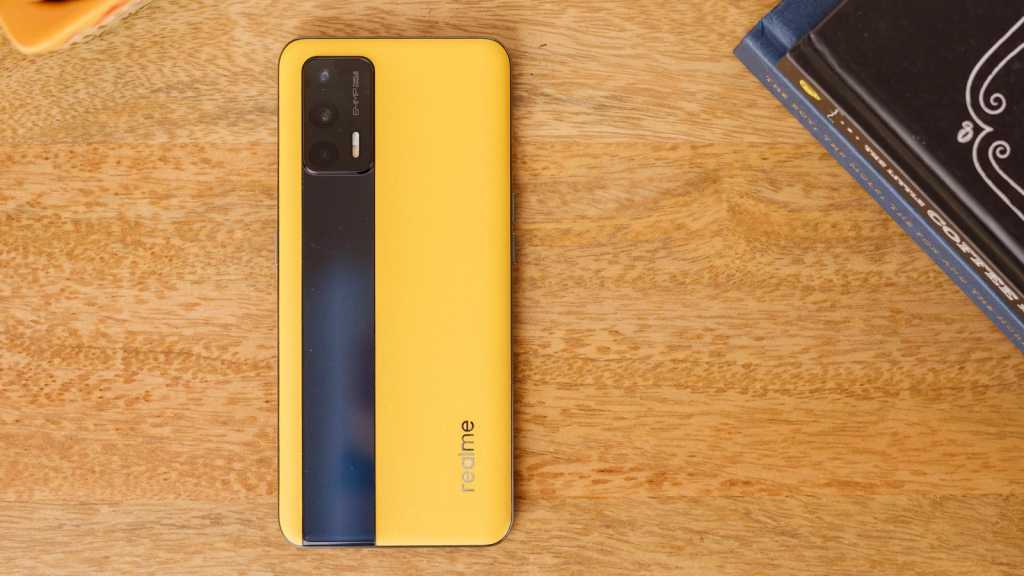 With an unbelievable set of specs in a standout design with a surprisingly low price, the Realme GT is 2021’s flagship killer.

Realme is back with another eye-catching smartphone in the Realme GT, and I’m not just talking about the striking Racing Yellow design. It’s one of the cheapest Snapdragon 888 phones you can buy coming in at an astonishing price of just under $600/€450.

It’s not just got a flagship chip and sacrifices elsewhere to achieve the price either. There’s a 120Hz screen, 65W fast charging and more. Overall, this is one of the best value for money phones we’ve ever seen.

Ok, there are other options than the Racing Yellow model I’ve tested but they don’t half seem boring in comparison if you ask me. It’s really refreshing to see Realme do something a little different, reminiscent of the days when firms like Motorola offered wooden or leather backs.

This is vegan leather and has a black strip of glass running up to the camera module (with minimal bump) giving it strong Kill Bill and Bumblebee from Transformers vibes. Note that this model is a little thicker than the Dashing Blue and Dashing Silver colourways at 9.1mm vs 8.4mm.

That doesn’t bother me, and I doubt you’d notice if it wasn’t pointed out anyway. The vegan leather looks and feels great and Realme hasn’t even limited this design to the higher-spec set of components either.

The rest of the design is pretty standard for a modern phone but there’s a nice little strip of yellow on the power button to match the back and it’s small details like this that I really like. I’m glad Realme doesn’t go down the route of slapping huge letters on the back – ‘DARE TO LEAP’ on the 8 Pro, for one cringe-worthy example, but it’s odd that it doesn’t say ‘GT’ here. If I bought a GT model of a car, I’d expect the badge on the boot.

Despite having a large screen, I found the GT to be slim and easy to handle. It’s a fairly modest 186g partly thanks to a plastic frame. You can’t have everything at this price so although there is a headphone jack, the Realme GT offers no form of waterproofing.

It’s a SuperAMOLED for solid contrast and popping colours along with a smooth 120Hz refresh rate. That’s high considering even 90Hz in the mid-range is a decent step up from the standard 60Hz.

The phone can auto-switch the rate or you can select 120Hz in the settings menu to lock it in, which I’d recommend as the experience is super smooth. The phone then has a 360Hz touch sampling rate meaning tapping anything on the screen feels oh-so-instant.

Realme has also embedded a fingerprint scanner into the display which for me has worked really well. You can use it along with face unlock which also does the job quickly most of the time.

One of the headline features of the Realme GT is the fact it has a flagship Qualcomm Snapdragon 888 chipset. This is normally found in high-end phones like the Sony Xperia 1 III, OnePlus 9 Pro and Asus ROG Phone 5.

It would be reasonable for Realme to choose an older generation 800-series Snapdragon or even simply a chip from lower down the range to achieve the price. The cheapest model comes with a healthy 8GB of RAM and 128GB of storage but you can opt for 12/256GB if you like.

Realme hasn’t even scrimped here either as the RAM and storage are speedy LPDDR5 and UFS3.1 standards. Again, this is unusual for phones in the mid-range.

I’ve tested the lower-spec model here and even then, it’s super slick in usage. The combination of high-end core specs and the 120Hz display is a formidable combination and if I was reviewing it without knowing the price, I’d certainly be saying Realme is firmly challenging in the flagship space rather than mid-range.

As you can see from the benchmark results below, the phone really is performing at a flagship-level with only the Poco F3 able to compete.

I’ve gone through the spec sheet with a fine-tooth comb to find out where Realme has at least made a few sacrifices or compromises with internals but there really isn’t anything. In fact, it’s surprising to find a very modern list of components including Wi-Fi 6, NFC, Bluetooth 5.2, and 5G support due to the 888 SoC.

Just about the only thing I can’t find is a microSD card slot, but the storage capacities on offer here should be sufficient anyway.

Cameras are often where mid-range and budget phones take a dip in quality, despite the lens and megapixel counts that will be shoved in your face. However, Realme has done a pretty good job here, even if the selection of four cameras isn’t the best combination ever.

Things start with a 64Mp Sony IMX682 sensor (f/1.8) which as you’d imagine pixel bins to 16Mp by default. This is the camera you’ll use the most but there’s also an 8Mp ultrawide sensor (f/2.3) alongside it with the third rear option being a now typical 2Mp macro lens.

Overall, the main sensor does a good job of decent photos in a range of situations with good levels of detail and contrast, although there is still noise if you look closely. Low light isn’t the GT’s strongest point but the Night mode does improve things a lot.

I like having an ultrawide-angle option, even if it is a lot softer and noisier than the main sensor. Colours can come out a bit different between the two, particularly green and blue, but reds are much more consistent in my tests. Still, the much higher levels of detail from the main sensor will mean the ultrawide should be reserved for when you really need to fit more in the frame.

Back to the main sensor and you can shoot in the full 64Mp if you like and you’re better off doing this and cropping later than using the 2x and 5x zoom options in the regular mode as these come out pretty ropey.

As we’ve found at Tech Advisor time and time again, it’s the macro lens that seems to be primarily there to get the count up to three on the back. ‘Ultra Macro’ is a little hidden under ‘More’ in the app but even once you’ve found the mode, it’s far too difficult to hold the phone at the correct distance to get an in-focus shot.

There’s nothing more than a note on-screen telling you 4cm is the correct amount. Even when I managed to fluke a reasonable shot, the quality isn’t good at all so you’re better off using the main sensor from slightly further away.

I wouldn’t call the selfie camera particularly wide-angle but it does a decent enough job of capturing detailed shots and the portrait mode is fairly decent, too.

There’s no optical image stabilisation (OIS) but the gyro-EIS (electronic stabilisation) does keep video footage nice and smooth. You can shoot in 1080p or 4K resolution at up to 60fps with other modes like slo-mo, time-lapse and dual-video view available separately.

The Realme GT has a large 4500mAh battery and although doesn’t make any claims about two-day battery life on the website, that’s certainly what I’ve found. A 48-hour period of my typical usage left me with 20-25% juice left.

That doesn’t include much in the way of gaming or watching video content but even power users will comfortably get more than a day from the phone. In the PCMark battery test, the phone lasted for a decent 10 hours and 15 minutes.

If you do get low, Realme promises 52 minutes of YouTube with just 5% left if you switch into the Super PowerSaving Mode. That’s not the most impressive thing here, though, as the phone supports 65W SuperDart Charge.

One of the only small signs that the Realme GT isn’t a full-on flagship is the fact it doesn’t have wireless charging.

The Realme GT is up-to-date when it comes to software, shipping with Android 11 and Realme UI 2.0, recently launched on the 8 Pro.

On the surface, it looks and feels pretty close to stock Android and that’s a big plus point for me with the main screens appearing very similar to a Pixel phone at a glance. Of course, there are differences when you delve deeper.

Realme UI 2.0 is largely about customisation so you can control things like icon styles, fonts, colours and more. There are loads of things in the settings menu to investigate and try out including various convenience tools, digital wellbeing, an ‘ultra vision engine’ to enhance video content and the Realme Lab where you can try beta versions of features.

Considering I typically find it frustrating to review phones when I’m used to a Pixel most of the time, I’ve felt very at home and comfortable using the Realme GT’s software.

My main complaint is the amount of pre-installed apps including LinkedIn, Booking.com, Soloop, HeyFun and WPS Office. This isn’t the worst problem though as you can uninstall them.

The Realme GT starts at – get ready to double-take – $599 or €449. It’s frankly a ridiculous price for a Snapdragon 888 phone with plenty of other top-notch specs, as we’ve discovered.

We don’t have official UK prices directly from Realme but Ali Express lists the global version of the GT at £473.76 and £573.42, albeit with 30% sale discounts at the time of writing.

Meanwhile, Amazon US lists the phone with a mix of prices and Amazon ES has the GT at €482 or €599 depending on the model.

It does mean that even the cheapest model sits towards the upper end of the mid-range so there are plenty of cheaper phones on the market that offer things like 5G or 120Hz display – the Xiaomi Redmi Note 10 Pro, Poco F3 and Realme’s own X50 5G spring to mind.

However, none of these rivals have a Snapdragon 888 along with things like long battery life, 65W charging and more.

Check out our charts of the best mid-range phones and best smartphones to see what other options you have.

The Realme GT is a very interesting smartphone which goes way beyond its yellow vegan leather option. It’s the first phone in a while that has truly bridged the gap between flagship and mid-range devices like OnePlus used to do so well.

This modern flagship killer offers high-end specs at a more than reasonable price if you care about the details. With a Snapdragon 888, LPDDR5 memory and UFS3.1 storage, the power to price ratio is off the charts for 2021.

It also has plenty more to like, primarily the Super AMOLED display with a 120Hz refresh rate and 65W fast charging.

There are things that separate the GT from flagships like Samsung’s Galaxy S21 range, though. Chiefly the fact that only two of the four cameras can be called decent quality and then the lack of things like waterproofing and wireless charging.

Living without these things are reasonable compromises to get such a high-specced phone at this price making it a budget-conscious power user’s dream if a Samsung, Sony, or Apple is out of reach.