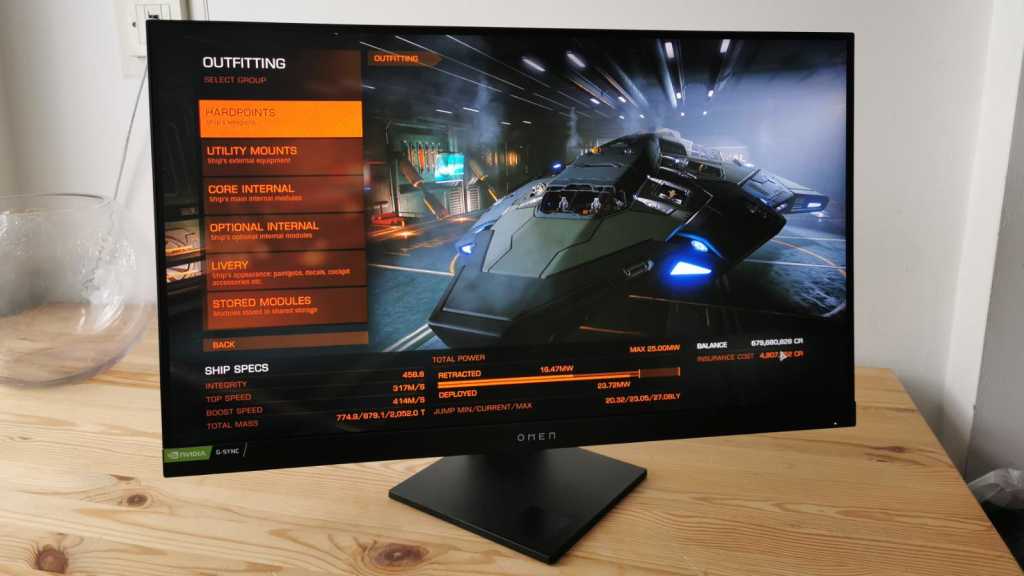 If we can ignore its disdain for support adjustment and the high price, the HP Omen 25i offers some excellent qualities for those who can’t get playable framerates in greater than 1080p resolution.

It seems an odd branding that ‘Omen’ was chosen by HP for their gaming related products. Maybe someone senior at the company is a huge horror movie fan?

Whatever the reason, the current monitor line-up includes a product called the Omen by HP 25, and this has now been superseded with the new Omen 25i, a natural successor. The previous design used TN screen technology, had a refresh rate of 144Hz and colour 6 bits +FRC model, and the new Omen 25i can trump all those cards.

But has it enough to take on the likes of LG and Samsung in what has become an increasingly competitive market?

We’ve covered a few game-orientated screens at Tech Advisor, and they often have come with attractive illumination, strange colour schemes and elaborate stands.

Out of the box, I soon realised that the Omen 25i has none of those things. It’s a monitor for those gamers that shun the bright LED lights, love the embrace of black and never adjust the height of their monitor.

Getting it out of the packaging is one of those eccentric exercises where you attach the support arm to the screen, then the foot to that and then use that structure to lift it out of the box.

The foot is an odd 16.5cm square plate rotated at 45 degrees to the screen that connects to the arm using a thumbscrew from underneath, and the connection to the screen is a wholly proprietary joint that clicks in when the two are successfully forced together.

While I admire the tool-free assembly, this support only offers a tilting motion of -5 to 20 degrees and no other planes of translation. There is no twisting, no rise and fall, and certainly no pivoting to distract prospective gamers from their hobby. One positive note about it is that the support arm has a hole through the stand to run cables.

The ‘diamond’ motif created by the rotated squire foot is repeated on the back of the screen with a block that projects to provide a relief where the ports are placed.

On the lower right is the power inlet, a DisplayPort 1.4 and HDMI 2.0 inputs, and on the left is a USB downlink, two USB Type-A uplinks and a 3.5mm audio jack for headphones. Given that you need to run the USB downlink line to the screen, that you only then get one single additional USB 3.2 Gen 1 port from the hub is rather disappointing.

There are no buil-in speakers, saving me from the auditory damage caused by cheap 2W or 3W drivers that many monitor makers chose to include. But be warned, when you plug this screen into Windows 10, it will appear as an audio device due to the through headphone jack. And the computer with dutifully set this as default.

Inexplicably you’ll have no sound, even if you have speakers or another monitor with them already connected.

But, those are the majority of criticisms covered. Because when we get to the panel, the Omen 25i is something a bit special and shows just how good IPS panels have gotten in the last few years.

To understand better why this screen is so superior to many screens in the sub-$400 gaming screen market, it’s time to dig into the specifications.

With TN technology heading to extinction, with just a few exceptions like HP’s Omen X 27, the market is mostly divided between VA and the IPS panel types. Conventional logic is that VA has better response times but loses out to IPS in colour accuracy.

But, with some work, IPS panels can be made quicker, and that’s the approach that HP engineers have taken with the Omen 25i. The result of these endeavours is a refresh of less than 1ms combined with an excellent colour gamut.

Looking pretty will attract some gamers, but support for both AMD FreeSync and Nvidia G-Sync allows the 25i to avoid screen tearing up to 165Hz. The FreeSync implementation is the latest Premium Pro variety that supports HDR content and alleviates framerate low points with LFC (low framerate compensation).

For those wondering why HP didn’t go for 240Hz, as can be found in some of the competitor products and the X 27, the answer is HDR. A quick search of competitor products reveals that you can have one or the other, but not both. HP went with DisplayHDR 400 certification instead of supporting the relatively few gamers with high-end video cards.

With two inputs in use, you can see both sources at once with Picture-in-picture mode, should you want to watch the football while playing a favourite title.

For those that like to tweak settings, the Omen 25i has a decent OSD menu system with various models that prioritise response time, colour accuracy and power consumption, and you can enable/disable adaptive-sync and HDR as you wish.

There is even a menu option to help with multi-monitor alignment, should you own a brace or more of this design.

The testing of this display yielded some interesting results that indicate a convergence between those panels that are meant for gaming and those with more serious colour accurate uses.

That’s not to say that the Omen 25i is likely to become the weapon of choice for those working with colour, but not many years ago, a colour gamut of this breadth would have been considered special.

My display analysis revealed full 100% coverage of the sRGB gamut, 76% of AdobeRGB and a respectable 78% of P3 colours. The default gamma was 2.3, a little higher than ideal, but the brightness and contrast capabilities are very accurately quoted by HP.

With IPS panels, I usually notice that they tend to be brighter in the middle due to the typical backing thing scheme, and the Omen 25i exhibits this with the corners being anything up to 8% darker than the middle at 100% brightness.

The only place this panel didn’t perform brilliantly was in respect of colour uniformity, with it offering better rendition in the bottom right, though not by enough to be noticeable without using a calibration metre.

Overall, tonal response and colour uniformity might have been better, but for a gaming solution, this is a better panel than I’ve any reasonable right to expect.

You can buy it from Amazon in the UK and Newegg or HP in the US.

That puts it in a very similar price point to the Asus VG258QR and BenQ MOBIUZ EX2510S, but it’s more expensive than the 27in AOC Gaming C27G2U and MSI Optix MAG272.

The gamble HP took here is that most of these screens can’t offer HDR and those that do have HDR lack a 165Hz refresh. One panel that, like the HP Omen 25i, has both these features is the Asus TUF Gaming VG27WQ1B, a better value option since it is 27in and is also curved.

With several alternatives with a similar feature set and bigger than 25in display entering the market, the HP Omen 25i might not be able to maintain MSRP for long so could become better value for money soon.

What HP thought when it made a support stand that only tilts is a mystery since the gaming market has adjustability at its very core.

However, remove that misstep from the equation, and what you’ve got is a bright and punchy panel that works well in games and acceptably for other purposes.

My only reservation is that unless they’ve only got a low specification graphics card, most gamers will be aiming for a 1440p resolution and not the 1080p offered here. And, that choice hints at the second issue, cost.

It is possible to get a 27in 1440p monitor with 165Hz refresh and HDR for near the asking price of the Omen 25i. That cost difference could be a problem, but many similarly priced alternatives aren’t HDR, even if some balance this by offering a 240Hz refresh rate.

Therefore, the HP Omen 25i is a somewhat niche option. Its specification suggests a gamer who prides fluidity and colour representation over resolution. In the somewhat inverted world that we now live, where old video cards are worth more now than when originally sold, there might be a place for this product, even if it appears to fly in the face of conventional wisdom.

My view is that it needs to be a little cheaper, or the next wave of unbranded displays will seem far too attractive if they offer a 27in panel, 165Hz refresh and HDR at less than this price.