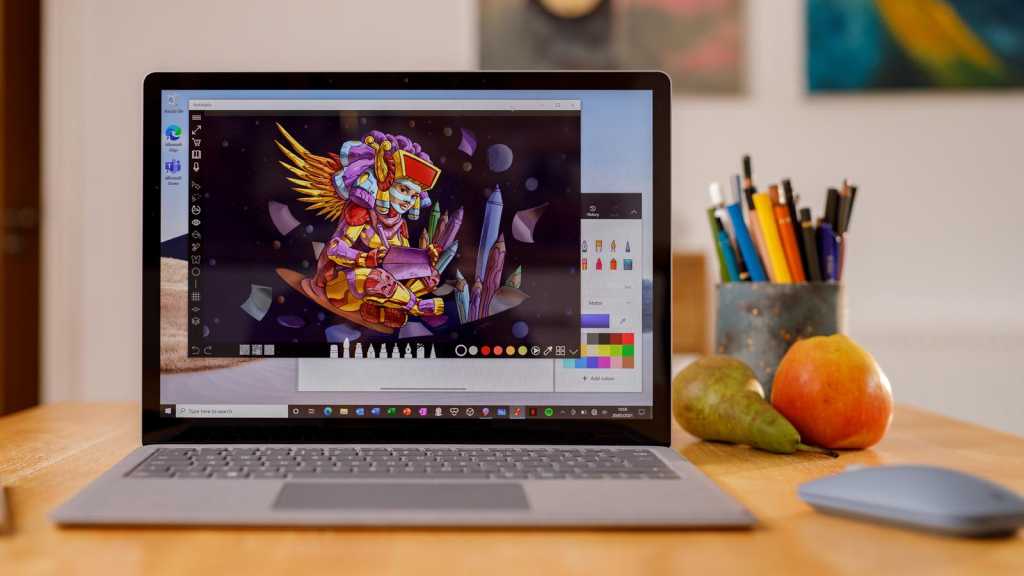 The Surface Laptop 4 meets most of the criteria for a great thin and light laptop, but then so did its predecessor. A lack of upgrades may frustrate prospective buyers, and better value for money will be found elsewhere for more expensive models.

Microsoft’s Surface range has become the default for Windows 10 PCs, so it’s hard to believe the first Surface Laptop was released as recently as 2017. That original device didn’t reinvent the wheel when it comes to thin and light laptops, but ticked a lot of boxes for most people.

The Surface Laptop line has been refined and tweaked since then, although rivals typically provide better value for money. Microsoft is hoping that’s changed on the Surface Laptop 4, which now offers a choice between AMD and Intel chips on both 13.5- and 15in models. Battery life has also been improved, but is the Laptop 4 a wise choice as we enter a new era for Windows PCs? Here’s my full review.

The Surface Laptop 4 looks a lot like its predecessor, but that’s not necessarily a bad thing. Many people will be hoping for more than this iterative update, but the tried and trusted design will still appeal to newcomers. Its stripped-back, minimalist design language still hits the spot for me personally, even if it’s beginning to look dated.

However, if you’re looking for standout design features, you’ll be disappointed. Aside from the Microsoft logo on the back, it’s hard to tell the Surface Laptop 4 apart from the wealth of other Windows laptops. That’s especially true on the generic-looking Platinum model I tested, although the Matte Black, Sandstone and Ice Blue alternatives help it stand out more.

Regardless of the colour you choose, the outside of the device won’t be your main focus. Flipping the Surface Laptop 4 open (possible using just one finger) reveals the main event – the display.

It’s available in 13.5- and 15in sizes once again, and Microsoft has stuck with the increasingly popular 3:2 aspect ratio. I’ll talk about how it performs in more detail later.

Below you’ll find a full-size keyboard, albeit without a separate number pad. It’s not quite best-in-class when it comes to laptop keyboards, but offers a good amount of travel without the loud clacky noise you’ll get with mechanical keys. I had no problems typing away on it for a full workday.

The Alcantara fabric covering remains exclusive to the smaller device. This suede-like synthetic material is also used on the Surface Pro Signature Type Covers and provides a comfortable place to rest your hands. It’s not quite as practical when it comes to accidental spillages, though. If you’re keen on more screen real estate, the 15in model’s metal finish will be very familiar.

The Surface Laptop 4 benefits from a large trackpad regardless of which model you choose. It’s satisfyingly clicky and supports all Windows gestures, but I’d still recommend connecting a Bluetooth mouse for an improved navigation experience. Microsoft’s own Surface mouse works well, but there are plenty of alternatives.

One thing you won’t find on the Laptop 4 is a fingerprint scanner. This is disappointing on a device that most people will pay four figures for, especially when many cheaper laptops support the feature. It means you’ll have to rely on the IR-enabled Windows Hello face unlock, although this was easy to enroll and fairly reliable.

The 720p front-facing camera hasn’t received any upgrades on the Surface Laptop 4, but it maintains decent colour accuracy and does a good job with exposure. Given 1080p built-in sensors still aren’t standard, it remains one of the best laptop webcams around. Combined with dual studio mics, the video calling experience on the Laptop 4 is excellent.

Unfortunately, those three sensors are located within some fairly chunky bezels. The relatively low 80.9% screen-to-body ratio isn’t a dealbreaker, but I was hoping for a more modern design.

The Laptop 4 also benefits from a Dolby Atmos-enabled speaker system. Audio from the device delivers excellent clarity, even at high volumes, but struggles for bass. As a result, it’s generally more effective on voices than music.

Unfortunately, there’s another noise you’ll regularly hear during your time with the Surface Laptop 4 – the fans. This is a perfectly acceptable cooling method while carrying out demanding tasks, but it gets loud here even with regular everyday use. With some modern laptops offering near-silent operation, it becomes a little grating.

One area I was hoping for upgrades was ports. Microsoft’s selection of one USB-A, one USB-C and 3.5mm headphone jack is fairly typical by thin and light laptop standards, but it still means you’ll need an adapter from time to time.

Microsoft did finally embrace USB-C on the Surface Laptop 3, but it still uses the proprietary Surface Connect port for charging. Magnetically attaching the cable is fiddly and annoying, and can get in the way if your power source is to the left of where you’re working.

As is usually the case with the Surface Laptop line, it’s a real highlight. Colours are rich and vibrant, and it offers an excellent level of detail. From my tests using the SpyderX Elite, it covers 98% of the sRGB colour gamut, alongside 74% of Adobe RGB and 73% of DCI-P3. That’s some way short of best-in-class, but colour accuracy is still one of the Laptop 4’s strengths.

Brightness performance is more middle of the road. A maximum of 389 nits means using it in most indoor environments is fine, but you’ll probably struggle outside.

In fact, unless you’re planning on gaming (which Microsoft doesn’t specifically advertise), you’ll probably be satisfied with how it performs.

However, it’s missing a couple of features that are beginning to make their way into consumer-focused laptops. Microsoft describes the Surface Laptop 4’s display as ‘PixelSense’, but the key thing to know here is that it’s LCD and not OLED. The latter is capable of better contrast and more vivid colours, although it does usually deplete battery life more quickly.

Another thing I would like to see is a high refresh rate. The feature is increasingly common on modern laptops, although the Pro-level Surface Book line may be the first Microsoft PC to get this feature.

The Surface Laptop 4’s most significant change comes under the hood, with a shift to 11th-gen Tiger Lake processors. However, Microsoft is now letting you choose between the latest Intel silicon and AMD’s Ryzen 4000 Series. The latter is supposedly a ‘Surface Edition’, but it’s not clear why Microsoft hasn’t used the latest Ryzen 5000 Series.

I can only comment on the Intel Core i7 model I tested, but our US colleagues at PCWorld used a Ryzen 7 model instead. As you’ll see below, benchmarks suggest the AMD processors have a slight upper hand, with both featuring 16GB of RAM:

Nonetheless, I was still impressed with the performance from the i7 model. It can handle multiple open windows, multitasking and editing software with relative ease, although you’d probably expect that from this £1,649/US$1,699.99 configuration. A comparison with other high-end laptops reflects this:

The Surface Laptop 4 isn’t pitched as a gaming device, but it is capable of playing basic games with relative ease. Unfortunately, that doesn’t quite stretch to AAA titles, which put too much of a strain on the Iris Xe integrated graphics for it to handle. The 3DMark test indicated it could run Battlefield V at over 35fps, but it’s not a device we’d recommend for serious gamers.

The standard Wi-Fi 6 and Bluetooth 5.0 support is, although I was hoping for LTE connectivity of some sort. I’m not expecting 5G, but the business-focused Surface Pro 7+ definitely benefits from having 4G on board.

There’s usually not much to say when it comes to Windows laptops and software, but that’s all changed since the announcement of Windows 11. Microsoft’s new OS has a very different look and feel to Windows 10, as well as new multitasking features and native support for Android apps via the Amazon Appstore. The Surface Laptop 4 meets all the hardware requirements, meaning it’ll be eligible for a free upgrade in 2022.

If you’re considering the Surface Laptop 4, the fact it runs Windows 10 Home out of the box isn’t a reason not to buy it. Microsoft is highly unlikely to update the Surface Laptop line until mid-2022 at the earliest, and you’ll get Windows 11 as soon as it’s available.

Battery life is one of the key areas of improvement on the Surface Laptop 4. Microsoft says all models have cells between 45.8Wh and 47.4Wh, which doesn’t sound particularly impressive. However, the company now claims all configurations will get you at least 16.5 hours on a single charge.

The i7 model I tested is quoted at 17 hours of ‘typical device usage’, although it’s not clear exactly what this involves. With the brightness set to 120 nits, I recorded exactly 16 hours in our 720p video loop test – that’s well above average. It dropped to 11:38 at 200 nits with a 4K video playing, but will still comfortably get you through a full workday.

Unfortunately, the charging situation isn’t quite so impressive. The Laptop 4 persists with Microsoft’s Surface Connect port, with the USB-C port used only for data transfer. It attaches magnetically but is fiddly and annoying to use, even if it does keep the USB-C port free. It also doesn’t charge very quickly – I recorded 31% in 30 minutes from off.

You can pay as much as £2,399/US$2,399.99 for the top-spec model, but most people don’t need that much power. See the full range from the official Microsoft UK and Microsoft US sites, but the best price currently can be found at Amazon UK.

Those cheaper models put it roughly in line with many of the best laptops you can buy, including the Dell XPS 13, Huawei MateBook X Pro and Apple’s latest M1 MacBook Air. All three of those devices bring something different to the table, but the Surface Laptop 4 is still able to hold its own.

From my time with the device, I’d say cheaper models Surface Laptop 4 are accurately priced. However, rival devices offer better value for money higher up the line, so it’s hard to justify dropping over £1,500/US$1,500 on one of these, but it still feels well future-proofed.

The Surface Laptop 4 is a cautious upgrade from Microsoft, but it still hits the mark in a number of key areas.

Performance is solid across all models with a choice of AMD or Intel for starters. Battery life is excellent and the display remains solid. You still don’t get premium features like a high refresh rate, OLED or LTE connectivity, but these aren’t dealbreakers for most people.

Ultimately, if you’re looking for a solid everyday laptop that will serve you for years to come, the Surface Laptop 4 is a great option – particularly at the more affordable end of the range.