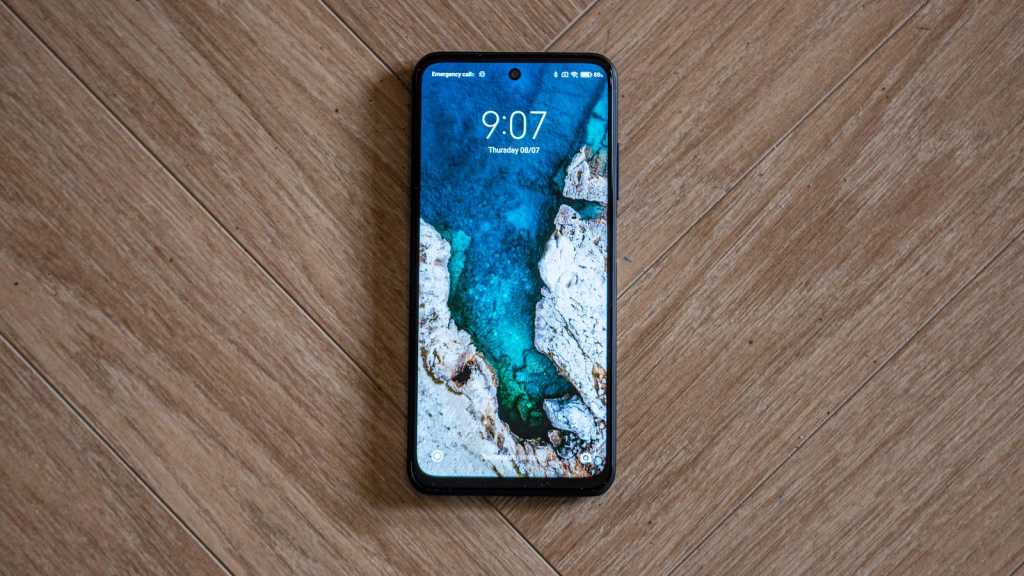 The Poco M3 Pro 5G has an attractive shopping list of specifications for a budget phone but is held back somewhat by its software experience and so so cameras.

At the budget end of the smartphone spectrum, specifications matter a great deal. With no headroom to play with fancy designs or interesting characteristics, these devices are defined by how much they can cram in without raising prices.

Enter the Poco M3 Pro 5G, the latest device from discount smartphone specialist Xiaomi, which aims to define expectations at the sub-£180 price point. It comes packing a large 5,000mAh battery, a fast 90Hz screen, a 48Mp camera and 6GB of RAM, all of which are far from normal for this class of device. That it also throws in 5G connectivity is merely the cherry on top that some mid-range rivals don’t even have.

But, as ever, a phone is always more than mere marketing spiel. It is an experience, it needs to be pleasant to use as well as being attractive on paper – so what is the experience of using the Poco M3 Pro 5G?

Good design at the budget end of the market is often defined merely by its absence. Typically phones at this level are made to look inoffensive and nothing more, but the Poco M3 Pro 5G bucks this trend somewhat.

With a glossy, fingerprint-loving plastic rear, it certainly doesn’t feel as though it is worth more than the price of admission, but the build quality is solid. There isn’t any flex or give when applying pressure to the device, and the balance is decent in the hand. The right side houses the combined power button/fingerprint sensor, which worked reliably in general use, and a decently clicky volume rocker.

What makes things interesting is the introduction of a little flavour in the form of a large ‘POCO’ badge under the camera island, which is itself very prominent.

Paired with the muted Cool Blue colour, it all comes together to make a device that stands out but which isn’t garish. It won’t turn heads, but it also won’t offend the eye but you can get more vibrant Poco Yellow colourway if you would prefer something more eye-catching and Power Black for something plain.

One thing that is impossible to escape is the size of the handset, for this is a big phone. At 6.5 inches the screen isn’t necessarily the largest on the market, but with the 8.9mm thickness and 190g weight this is a phone that isn’t the best for one-handed use. This is to be expected given the size of the battery included, but the Poco is a chunky monkey regardless.

No word is given as to whether the device is either splash or waterproof, though this is to be expected at this level. Other pleasant inclusions are an IR blaster and a 3.5mm headphone, both of which are increasingly rare but definitely appreciated.

A smartphone, no matter the price, will live and die by the quality of its display. It is a good job then, that the M3 Pro’s screen is among the better options available, even beyond its budget class.

At 6.5in, it is a big panel, interrupted only by a pinhole selfie camera. And at Full HD 1080p, it has enough resolution for most use cases, from reading to watching lots of video. The really interesting inclusion is a high refresh rate, with the M3 Pro capable of 90Hz rather than the standard 60Hz of most other cheap devices.

What this means is that the screen refreshes its image faster, giving an impression of greater smoothness in use. Though it is hardly a game-changer, its inclusion here is a pleasant quality of life improvement that elevates it above its brethren.

Using IPS LCD rather than an OLED panel, colour reproduction is good if lacking in some contrast and saturation, and brightness is decent indoors. Moving into strong sunlight made it difficult to view the content on the screen, though.

The ‘Poco’ name, though it hasn’t been in the world long, comes with certain expectations attached. In 2018, the first device to come bearing the name, the Poco F1, was the archetypal ‘flagship killer’, and its legacy informs everything the moniker now touches.

With 6GB of RAM, a Mediatek Dimensity 700 chipset and 128GB of UFS 2.2 storage the M3 Pro certainly has all of the ingredients for great performance. And I found that, in use, this translated into a smartphone that feels fast most of the time.

In most normal use cases, such as using social media, messaging, the device is responsive and smooth. Things only start to become a little iffy with more complex tasks and demanding games. Though playing the likes of PUBG is possible, it won’t be at high detail levels or the fastest framerates. Over time, the device also heated up significantly, taking a while to cool.

Of the usual benchmarks we run, GFXBench failed but you can see how the M3 Pro 5G compares to rivals like the Redmi Note 10 5G and also the mid-range Pixel 4a 5G in Geekbench and other tests.

The Poco M3 Pro 5G will be a good companion to power users looking for a budget handset, even if it gets hot under the collar during long gaming sessions.

A big tick for some users will be the inclusion of 5G as noted in the device name. There are plenty of mid-range handsets that eschew 5G support so it’s a solid reason to buy the M3 Pro over rivals if you want the latest mobile data speeds.

It is a well-known lesson that lots of megapixels doesn’t necessarily mean improved image quality. Keen to impress, the Poco M3 wears its ‘48MP AI VISION’ rear badge with some pride regardless.

The device is reasonably well-equipped in the camera department, although as is something of a trend here, this is the case on paper.

Given that good photographic performance under £200 is a very rare occurrence, expectations weren’t high for the Poco M3, and it is unfortunate that these were not exceeded in any way.

Performance from the main snapper is certainly adequate. Detail is quite good across most images, even into the corners, while colours had a decent level of ‘pop’ without becoming oversaturated.

A recurring issue was dynamic range, or lack thereof. In more challenging lighting scenes the M3 Pro typically turned out over-exposed images. Low-light performance too was nothing to write home about, though the included ‘Night’ mode does improve things somewhat by improving saturation and detail capture.

The Macro sensor is not used for any kind of photographic capture, instead being focused on video. And while it is certainly a novelty to be able to focus 2cm from the subject when shooting video, the poor quality of the resulting footage puts paid to any potential utility the feature may have otherwise had.

The selfie camera presents a slightly more positive impression, showcasing some decent detail and colour, while again overexposing wherever it could. A ‘beauty’ filter is on by default, which can produce some nightmarish results when cranked to the max, it is recommended that this should be turned off as soon as possible upon purchase.

Video capture for the device maxes out at 1080p 30fps, and some reasonably effective electronic stabilisation is offered.

A major selling point for the Poco is its gargantuan 5000mAh battery – though some of the competition, such as the Moto G9 Power, offer similarly sized packs, these are few and far between. Xiaomi advertises this as a two-day smartphone, and with the efficient 7nm processor in tow, this mostly proved to be the case in general use.

Across a sixteen-hour day, with normal usage (messaging, email, taking a few photos, around 30 minutes of GPS navigation and an hour of streaming music) the device managed to finish with around 55% left in the tank. This then stretched to the evening on day two, so a solid performance overall. There may theoretically be devices that can go further, but for most people, two days of battery life will be more than enough.

It is possible to kill the Poco in one day with a lot of heavy use, such as gaming, but this is the case with almost any smartphone.

When the time comes to top-up, fast charging is offered at 18W and a charger capable of providing this is included in the box. This restored the phone by around 35% in 30 minutes, which isn’t the fastest but is to be expected given the size of the power pack being juiced up.

Though the M3 Pro may wear the ‘Poco’ branding proudly, it cannot be forgotten that this is a device produced by Xiaomi. What this means is that the Poco M3 Pro comes with the firm’s own flavour of Android in tow, called MIUI.

Of all the varying manufacturer Android skins, MIUI is among the most divisive and for good reason. It alternates between directly aping iOS and providing feature overload, and the end result for the consumer is an often confusing mess.

First impressions, contrary to the above, are mostly positive. A lot of work has been done by Xiaomi to improve animation responsiveness around the UI and it shows, things feel smooth and responsive. Things begin to change when it comes to the notification shade, however, which takes more than a little inspiration from Apple.

A swipe down on the left-hand side of the screen provides notifications, while a swipe on the right brings down the ‘Control Panel’. This can be disabled, but this is the story of MIUI in a nutshell, generally cluttered controls and built-in redundancy.

The device also comes pre-loaded with a boatload of Xiaomi apps, including a browser, a gallery, a ‘security’ app, a file manager, Mi Fit and more. Paired with the included Google apps, it means that for every task there are at least two options available – and while some may appreciate this choice, in general terms it proves only to be an obstacle.

Power users who like to tinker and tweak the style and performance of their devices may find a lot to like here, there are options to tweak the white point of the display and a whole lot more. But for the general user looking for an all-purpose smartphone that’s easy to use, the presence of the bloated MIUI might be more than a little off-putting.

The Poco M3 Pro 5G is available now directly from Xiaomi’s Poco store and Amazon with prices starting at an early bird rate of £139 for the 4/64GB model if you buy before midnight on 9 July.

Competition is fierce at this price point, and most of it comes directly from Xiaomi itself. For the same price a Redmi Note 10S with an AMOLED screen can be found, while the Realme 8 5G offers almost an identical set of specifications, but with faster charging and a lighter software skin.

There is no word currently on the availability of the M3 Pro in North America.

Not convinced by the Poco M3 Pro 5G? Take a look at our full chart of the best budget phones to see what other options there are under £250.

The Xiaomi Poco M3 Pro 5G is, on paper, an exceptionally well-rounded budget smartphone. It offers a big 1080p screen with a 90Hz refresh rate, a 48Mp camera, a big battery and more for a price that won’t break the bank.

It is unfortunate then that its software is something of a let down. While some may be able to live with MIUI, the bloated interface and feature overload need significant work before becoming something worth of recommendation.

But if you can put up with the software, this is a device that will likely meet all of your needs and then some, if never quite trumping the competition in any significant way.