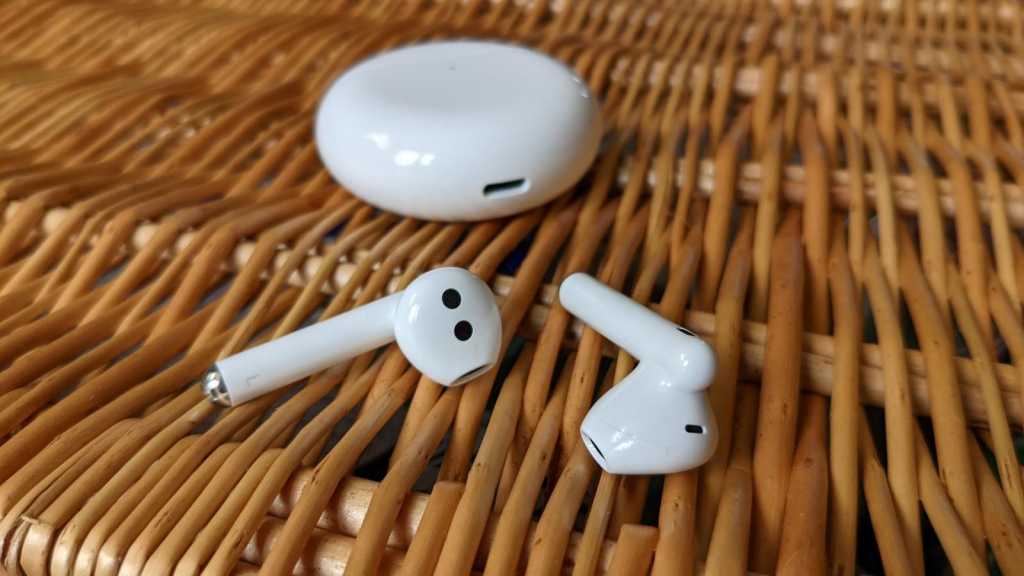 Solid enough wireless earbuds with good sound, ANC and features like wear detection. But the other FreeBud models are more appealing propositions.

Huawei is back with another pair of wireless earbuds to tempt you with and the FreeBuds 4 offer active noise cancelling, swipe touch controls and Bluetooth 5.2 for a reasonable price.

They’re impressive for the asking price of £129 but there are things missing that might well make you want to upgrade to the FreeBuds Pro and the open-fit design won’t be for everyone.

The case is once again a circular design and looks like a ping pong ball that’s been put into a vice – particularly in the Ceramic White model I’ve tested but you can also get the headphones in Silver Frost, too.

While the case might look nice in press shots, I’ve found it to be quite a pain in real life – much like other Huawei earbuds I’ve tested.

The glossy finish is slippery and although the earbuds are a little easier to get out than the FreeBuds 4i, they are still not easy. They also have the same problem where they face outwards so need rotating 180-degrees before you can put them in your ears. 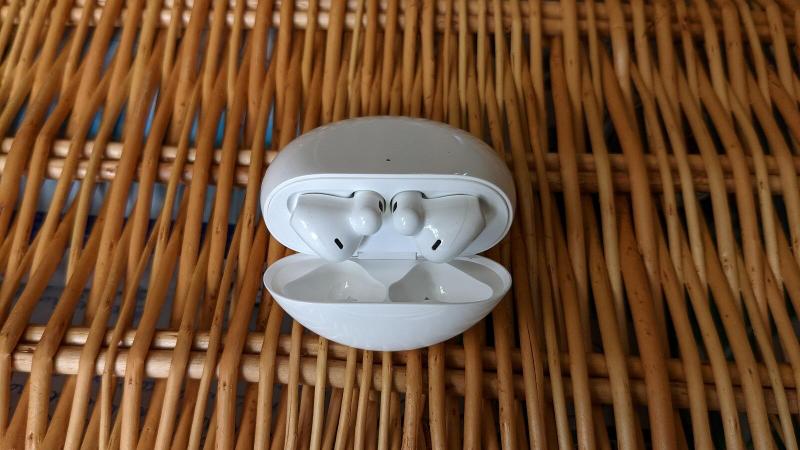 Once you complete these phases of faff, the FreeBuds 4 are surprisingly comfortable and secure. I’ve always been against this type of AirPods design where there is no silicone tip but the earbuds fit me very nicely indeed.

They are extremely lightweight at 4.1g each and Huawei’s promise of ‘an almost weightless’ feeling is largely true. They’re also IPX4 splashproof.

I’m still not convinced by the one-size-fits-all approach though as many people will prefer the traditional feel – and added noise isolation – of the traditional approach. Despite the good match for my ears, I did find the FreeBuds 4 a little painful when using them for a few hours. They sort of feel like they’re not there, but the plastic is hard and makes an impact eventually.

The FreeBuds 4 have more advanced touch controls compared to the budget 4i model as you can both tap, tap and hold and swipe giving you control over playback, noise cancelling and volume. It’s not 100% accurate and takes a bit of getting used to but I’d rather have it and do things twice occasionally than not have it.

Sadly, you can only customise the double-tap function on each earbud so things are a bit limited.

The noise cancelling is decent enough and able to block out a good amount of ambient noise from around you. However, there are better pairs on the market if this is an important element to you. You just can’t beat the traditional ear-tip seal, plus ANC for a fully ‘I’m in a quiet bubble’ experience, which is not what I found when using the underground in London.

Huawei calls it Open-fit Active Noise Cancellation 2.0 which sounds fancy but it’s a shame to find no ‘aware mode’ where the headphones use the external mics to let in sound around you so you can hear announcements etc. This noise cancelling is simply on or off with no control over its level. 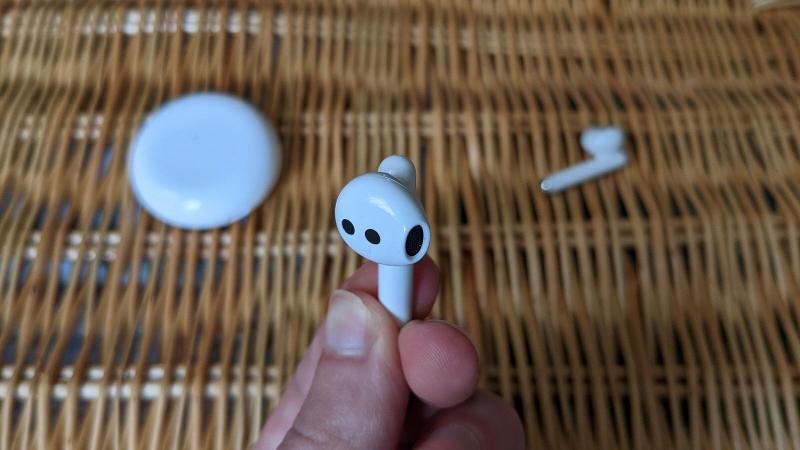 It makes some sense because Dynamic ANC is reserved for the FreeBuds Pro offering Cosy, General, Ultra modes, but even the 4i have an Awareness mode. The Pro model also has a Dynamic EQ feature you don’t get here.

While there’s no control over the sound, the FreeBuds 4 have larger 14mm drivers and the sound quality is very good overall. There’s more than enough power to pump them louder than is advisable.

They do sound better at medium volume rather than quiet, with a more well-rounded frequency response. There’s bass punch and the mid-range and top-end are both allowed to shine when needed.

Listening through my usual playlist of varying tracks to test speakers and headphones, the FreeBuds 4 cope well with a variety of genres. For example, dance, vocal-led pop and folk tunes sounded great in their own ways.

However, the tricky mix of frequencies involved in rock music such as the Foo Fighters produces a muddier result. It’s not bad, just noticeably not as crisp as other styles of music.

The connection is very stable over Bluetooth 5.2 and you’ll get easy pop-up paring on phones running EMUI10 or above. They can also connect to two devices simultaneously and wear detection works very well, pausing music when you take an earbud out then resuming when you put it back.

A downside, as I found with the FreeBuds 4i and Huawei Sound speaker, is that users must get the AI Life from the Huawei App Gallery, which in turn needs to be directly downloaded and installed.

There is a version of AI Life on the Play Store but it doesn’t support the FreeBuds 4 at the time of writing.

In terms of battery life, Huawei says the earbuds can last for four hours of playback and a total of 22 hours when you include the charging case. These figures drop to 2.5- and 14 hours with ANC turned on.

I found this to be largely true with one hour of playback taking off around 25% of the battery, although switching ANC on scrubbed off around 30%. However, I was sitting in a fairly quiet room at home so the battery drain will be more noticeable when out and about. 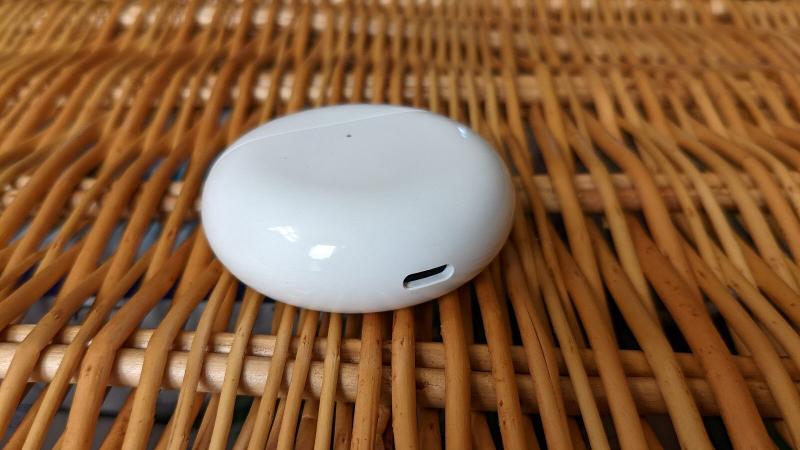 Oddly, the earbuds didn’t drain in sync with each other and after those two hours of testing, one was at 45% while the other was at 52%. Charging them up in the case for 15-minutes topped them back up to 83- and 88% which isn’t bad and took exactly 10% out of the case.

Overall, it’s not bad but there are plenty of earbuds out there that last longer – including, you’ve guessed it, the FreeBuds Pro.

Sitting in-between the FreeBuds 4i and the FreeBuds Pro (all have ANC), this pair of headphones costs £129.99 making them affordable but not quite in the budget range.

That’s what the 4i are for and so the FreeBuds 4 are rivals with pairs like the RHA TrueConnect 2, Samsung Galaxy Buds+ and Apple AirPods 2.

While you can buy them from retailers like Very and AO, you’re best off going to the official Huawei store where at the time of writing you’ll get a free Huawei Band 4 Pro worth £44.99.

Alternatively, Amazon has a bundle with the Band 6 at £129 as well as the FreeBuds 4 on their own. A spanner in the works here is that Huawei is currently selling the FreeBuds Pro for just £109.99, albeit without a free activity tracker.

The FreeBuds 4, like Huawei’s other headphones, are not officially available in the US.

Check out our chart of the best wireless earbuds to see which pair is right for you. 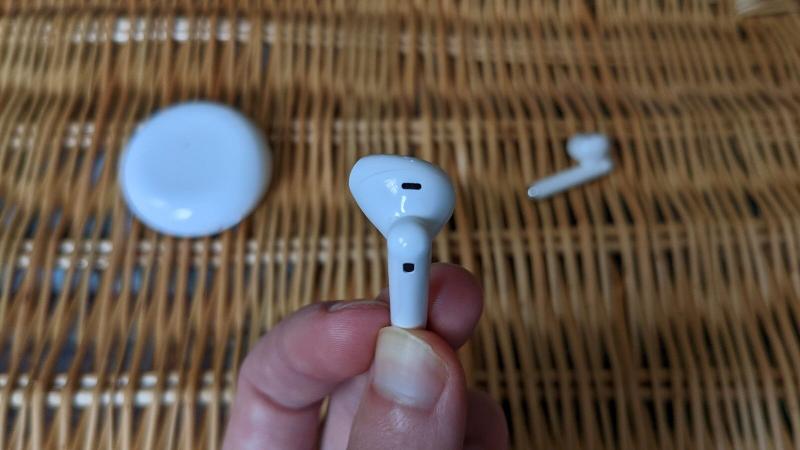 While the FreeBuds 4 are a solid enough pair of wireless earbuds, I’d wager they sit a little too awkwardly between the 4i and Pro models.

You can still get active noise cancelling on the 4i and the Pro model adds a lot more including Dynamic ANC, Dynamic EQ and both have longer battery life. Even the cheaper model has an Awareness mode you don’t get here.

While the noise cancelling and sound quality is good here, it’s the open-fit design that really separates the FreeBuds 4 from its stablemates. While I found them more comfortable and stable than expected, I’d still personally rather have traditional ear tips.

So, if the open design appeals to you then you’ve got a great reason to hit the buy button. Otherwise, especially while the Pro model is on sale, I’d go elsewhere.