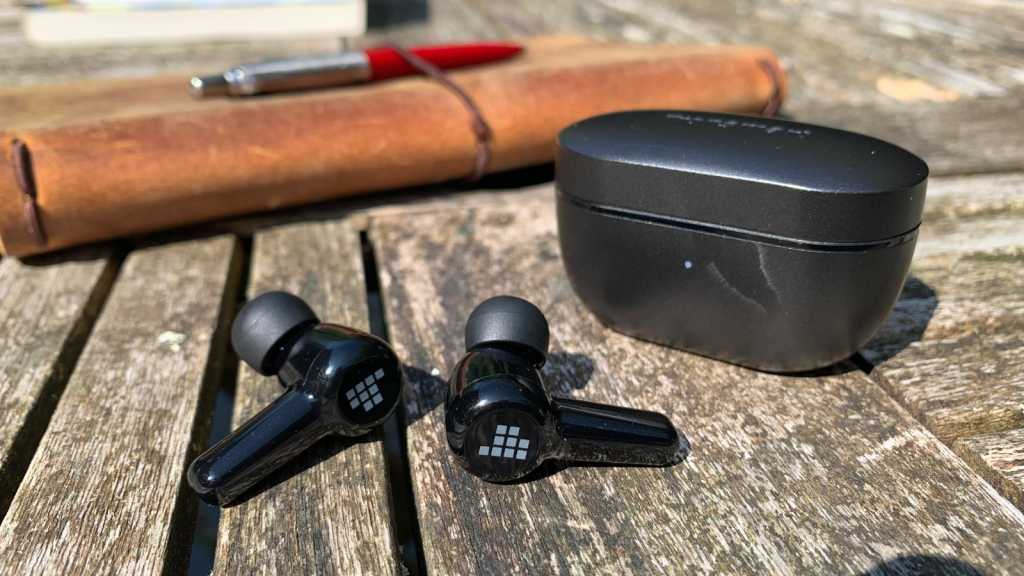 The last couple of years have seen a large influx of affordable, good-quality wireless earbuds from a variety of companies in South-East Asia. Tronsmart has been a notable player in this space, with several offerings that we’ve enjoyed. Now, it’s back with a new pair that feature active noise cancelling and a few other interesting features. Here we test the Tronsmart Apollo Air+ wireless earbuds.

We’ve all grown pretty used to the shape of wireless earbuds now. They generally come in two designs, either with stems or without. The Apollo Air+ is in the latter camp, sporting 2cm-long arms that house the charging points for when they are in the case, plus microphones for hands-free activities and the ambient mode, which I’ll get into a little later.

There are also proximity sensors that pause playback when you remove a bud, then helpfully restart again when you pop it back in your ear. 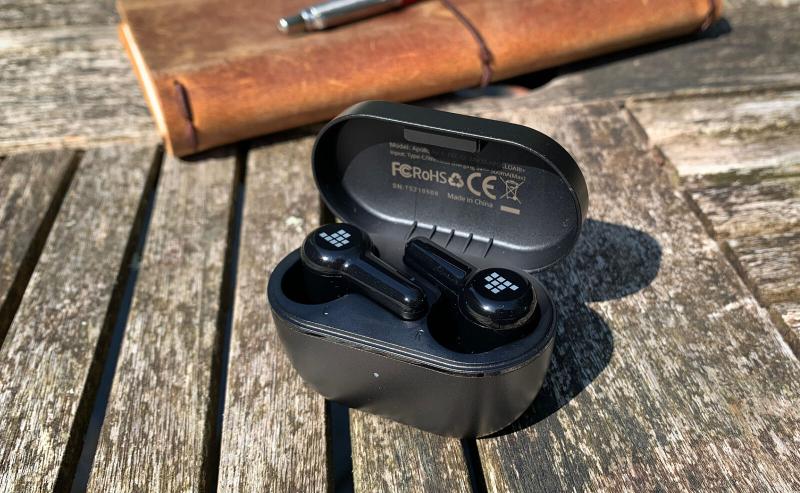 The main housing contains a 10mm graphene driver plus a Qualcomm QCC3046 processor. Controls are via touch-sensitive panels on the back of the housing, which use one tap to increase or decrease the volume (depending on which bud you tap), two for playback or pausing, and three to swap between the three modes: Normal, Noise Cancellation, and Ambient.

A shiny plastic chassis means that the buds are light and comfortable to wear, with accidental drops onto hard floors not resulting in any damage, probably due to the lack of mass. Tronsmart also includes five sizes of tips in the box, so you should find a size that fits. 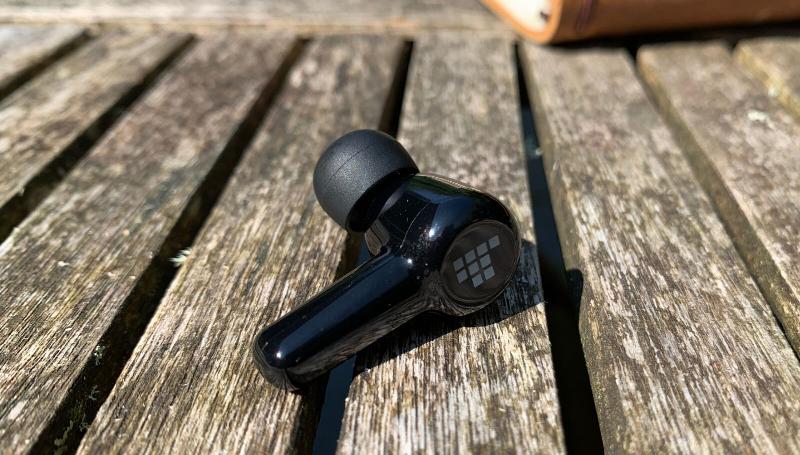 The plastic case has the now standard USB-C charging port, a pairing button, and a charging light so that you know when the buds are good to go. It supports both fast charging and wireless charging, which is unusual for cheaper buds, and can recharge the Apollo Air+ buds four times before needing to be plugged in again. Doing so will restore the case to full power in just over a couple of hours, so you won’t have to wait too long between listening sessions.

The Apollo Air+ feature an IP45 waterproof rating, so they are safe to wear in the rain or while sweating in the gym. You won’t want to go swimming with them, but that would just be silly anyway.

Audio on the Apollo Air+ is very good. The sound is full, rich and features solid representations across the frequency spectrum. This is aided by the Qualcomm aptX and aptX Adaptive audio codecs, powered by the Qualcomm QCC3046 processor. Whatever the technical combination may be, the results very pleasing to the ears. The buds can also get pretty loud, so keep an eye on your volume to ensure you don’t do yourself any long-term damage.

Tronsmart includes active noise cancellation (ANC) in the Apollo Air+, which is again something that isn’t usually found in this price bracket. Rivals in the budget space with ANC include the Enacfire A9s, Huawei FreeBuds 4i and Anker Soundcore Life A2 NC.

Tronsmart uses something it calls Hybrid Active Noise Cancellation, which combines Feedback ANC and Feedforward ANC via microphones to cover a broad range of frequencies.

Cycling through the three sound modes, I found that the noise cancellation setting is decent for wiping out a fair amount of din, but persistent sounds still get through. For example, while sitting beside a stream I could clearly hear the running water, albeit with some of the upper-mid and high frequencies tamed. But, if you’re looking for audio isolation, then you’ll still need to opt for the more expensive buds out there.

That being said, the Tronsmart Apollo Air+ buds do enough to make the feature a useful addition rather than a full-on selling point. The Ambient mode is also handy, as it introduces a little of the surrounding environment noise into the signal.

I found this particularly helpful when walking the dog down quiet country lanes, while still being able to hear when a car is approaching from behind. Compared to the Enacfire A9s, the Apollo Air+ buds hold their own, offering quite similar performance in terms of cancellation, while delivering richer audio tones. 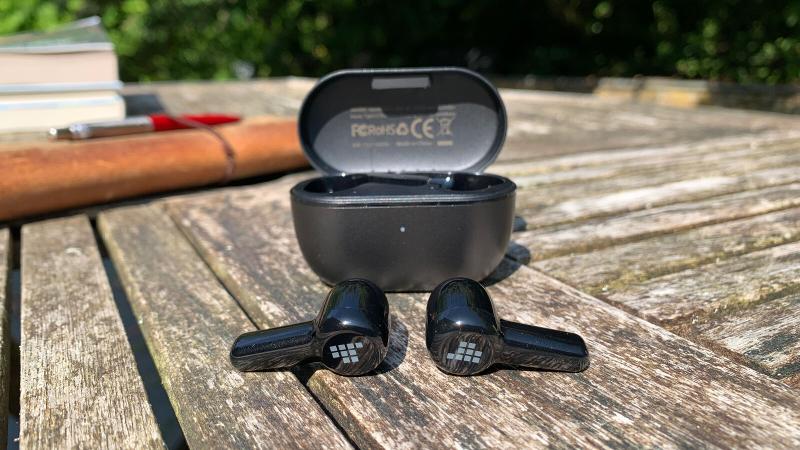 The microphones also do an admirable job when it comes to taking calls. The person on the other end found the audio quality perfectly decent, with none of the annoying echoing that can be an issue on cheaper buds.

Bluetooth 5.2 means that the connection between smartphone and buds is very robust, and during my time with the Apollo Air+ I never experienced any kind of dropout unless I walked off to somewhere else in the house, leaving my phone behind.

Tronsmart claims around five hours of battery life from a single charge, although I imagine engaging the noise cancelling or ambient modes will shorten this. I didn’t get to the full five hours in one go while testing, but a long three-hour walk passed by happily in the company of the Apollo Air+ with no warnings that the power was dropping, even though noise cancelling was turned on. I had similar experiences on a few different occasions, so it’s safe to say that the battery life in these buds is up to scratch.

With the charging case able to top them up four times, you could get up to 25 hours of battery life which is very decent.

You can buy the Tronsmart Apollo Air+ wireless earbuds in black or white liveries from Geekbuying for £74.14 in the UK or $99.99 in the USA. Be sure to check the listing on the site though, so you don’t incur any import taxes or duty costs.

By the time you read this, they will hopefully also be available on Amazon in the UK and USA for around the same prices as those listed above.

If you’re not too bothered about the proximity sensor and the Qualcomm aptX Adaptive codex, then you can opt for the cheaper Tronsmart Apollo Air earbuds, which are on offer from Geekbuying for £51.90 to UK customers or US$69.99 to those in the States.

Cheaper still are the Enacfire A9s, that deliver most of the advantages of the Apollo Air and Air+, but can be snapped up on the Enacfire site for £51.99/$66.66.

Check out our chart of the best budget wireless earbuds for more options.

Tronsmart has positioned the Apollo Air+ earbuds at the higher end of the budget range, so they’re up against some very tempting alternatives.

In terms of sound quality, they out-perform the Enacfire A9s that impressed me so much recently, and the ANC modes offer the same kind of results. Then there’s the handy proximity sensor feature, plus the responsive and reliable touch controls.

Decent battery life adds to the list of positives but there are decent alternatives at this price level worth considering from the likes of Huawei and Anker.