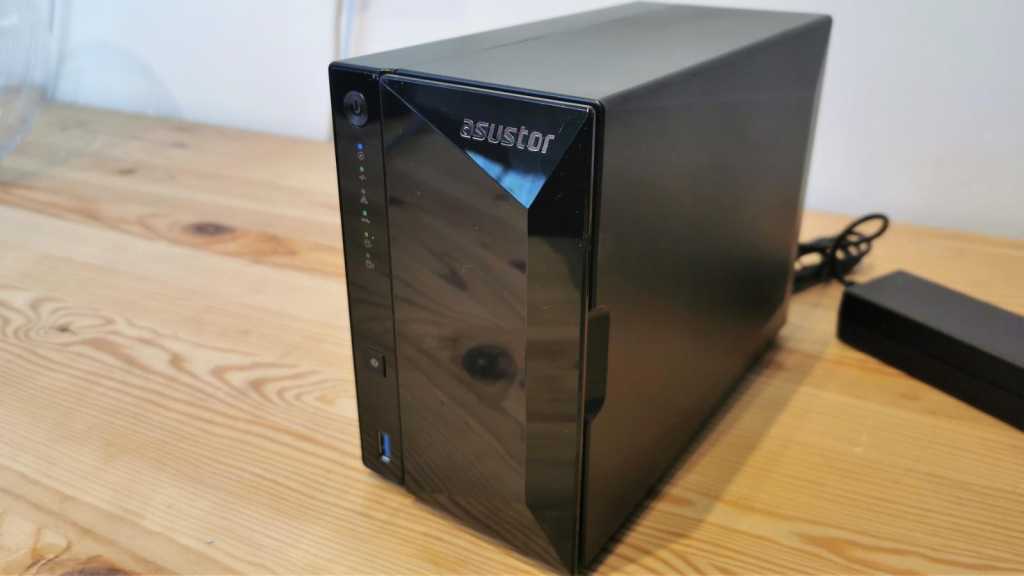 Aimed at delivering everything Synology offers at a similar price point but with 2.5GbE LAN as the extra sauce, Asustor has delivered a small powerhouse of NAS potential.

Asustor is a subsidiary of Asus established in 2011 to deliver cloud networking (NAS) and video surveillance solutions. It makes an impressive range of NAS hardware that covers home users, small business environments up to medium-sized NAS racks for more demanding clients.

Its latest products are firmly aimed at the prosumer space, specifically those that want a personal cloud device that can backup local computers and provides a central store for personal data.

The Drivestor Pro comes in two flavours; the four-drive AS3304T and the dual-drive AS3302T that is reviewed here. These promise plenty of power for the home user, and small business customer, for those that aren’t already invested in QNAP, Synology or TerraMaster hardware.

Having tested the Asustor Lockstor 4 AS6604T and being generally impressed, I was curious to see something from the firm with potentially broader appeal. The arrival of the new AS3302T, or Drivestor 2 Pro as Asustor also calls it, delivers exactly that.

Looking at the specifications, the difference between the dual-drive AS3302T and its quad-drive AS3304T brother is purely the number of drives the box supports. They both come with the same processor, ports and RAM, so the only selling point of the AS3304T is the enhanced internal drive options.

Obviously, the four-drive model is also physically bigger and has more RAID choices because of drive numbers, but in every other respect, they are the same platform.

Physically, there aren’t many surprises here. The AS3302T is a pressed steel cage for mounting two hard drives and clad in plastic to make it look marginally less like a rectangular box. The removable drive bays are also wholly plastic but are substantial enough to not easily break. While they don’t include a locking mechanism, Asustor does provide a magnetically attached cover that keeps the release handles away from curious fingers.

For those using 3.5in mechanisms, the trays are toolless, and for those with 2.5in drives, there are some small screws provided to secure them. I used both HHD and SSD drives, and the NAS doesn’t differentiate between them as storage devices.

Three USB 3.0 ports (USB 3.2 Gen 1) ports are provided, with one on the front and the other two on the back, and these can be used to add additional USB subsystems, expanding the maximum internal storage capacity from 36TB (2x 18TB drives) to a whopping 256TB (18 TB HDD X 14), but usable capacity may vary by RAID type used.

For those using a NAS to capture media, the front USB port is linked to a button that can be set to dump the contents of any inserted drive to the internal media. I’ve seen this before, but it’s a popular feature that allows files to be quickly transferred without a computer nearby.

Cooling is provided by a 70mm fan that pulls air from the front and through vents underneath and ejects it at the rear.  This fan remained remarkably quiet during my tests, as it exchanges air rapidly even at relatively low RPM.

Overall, this is a by-the-numbers NAS box design that didn’t provide anything shocking to discover. The only feature I’ve not seen on the majority of dual-drive NAS is the red 2.5GbE LAN port on the rear.

It’s interesting to compare the AS3302T with other small NAS boxes from Synology since they dominate this market. Synology makes a number of dual-drive models, including the J Series DS220j, the DS218 and DS218 Play from its Value Series, and in the Plus Series, the DS220+ and DS720+ models.

The Plus designated boxes are built around the Intel Celeron, but the DS218’s and DS220j both use the same ARM CPU as the AS3302T, with varying amounts of DDR4 RAM.

Where the AS3302T and its AS3304T brother stand out is that none of the Synology options supports better than 1Gbit LAN ports, including the Celeron-based designs.

Currently, Synology makes no NAS boxes with 2.5Gbit or 5Gbit networking inherently. Its boxes offer 1Gbit, or dual 1Gbit with link aggregation, with 10GbE at the high end. Some Synology NAS support a PCIe slot, and you can add a 2.5Gbit LAN adapter that way. It is also possible to add 2.5Gbit through USB, though this isn’t officially supported and requires additional drivers to be manually installed on the NAS.

Why Synology has disavowed 2.5Gbit (and 5Gbit) in this way is uncertain, but based on the AS3302T and AS3304T, it appears that Asustor is embracing faster LAN technology for home and small business users.

The similarities between the specification of this device and the popular Synology DS218 aren’t coincidental. Clearly, both companies have determined that this SoC and memory combination provides a fine balance between power and efficiency.

The difference is that the DS218 only offers a single 1Gbit LAN port, where this machine has 2.5GbE with the potential to move 2.5x more data. That’s not a big issue since the Realtek RTD 1296 1.4 GHz Quad-Core ARM processor it uses has more than enough power to handle that and two internal hard drives. It can transcode 4K video in real-time, so trundling hard drives hardly stress it.

How it might perform with large numbers of external drives connected by USB isn’t something I can easily test, but with a maximum throughput of 3 x 5Gbit, it should cope fine.

It could be argued that it will have less power available to run applications than the DS218, but the network performance is more likely to impact the effectiveness of a NAS in most scenarios. The compliment of 2GB of DDR4 RAM seems adequate, though the ability to add more would have been a nice feature for those with particular file-sharing issues. There are no SODIMM slots to upgrade RAM or any other potential upgrades.

I also noticed that while you can use SSDs as drives in it, you can’t make them cache another conventional hard drive, unlike some other Asustor models. There is a plausible scenario where you use a large, say 12TB, drive in this machine which contains a library of files that don’t need to be secured. For maximum speed of retrieval, adding an SSD and setting it to cache the 12TB would be a logical option, but the AS3302T can’t offer that.

What it can provide is a reasonable selection of applications, covering the many potential uses that a NAS of this variety can be put. I counted 150 applications in total, with many overlaps with those on other platforms. These include the ever-popular Docker-ce, Plex, Drupal, Git, IDrive, WordPress, Apache, PostgreSQL, Python, Perl, PHP 7 and Twonky.

This collection has a slight bias towards developer-related apps, but there are also many for media serving and syncing data from other networked systems. But it was also nice to see apps for home automation, surveillance, and eLearning.

Some of the apps have the polish that users might expect if they’ve used a Synology NAS, but not all. The better ones are those Asustor commissioned for backing up, syncing data from client systems and UPNP media distribution. It is possible to manually install Linux distributed code for those who are happy to attempt that, enabling developers to add whatever functionality they want or create.

Asustor has made great strides with its app selection, widening the offering and providing more of the functionality that users genuinely need. However, I noticed that some of the tools aren’t at the latest versions, suggesting that having so many is proving challenging for those charged with maintaining this blossoming collection.

It is heartening that Asustor has chosen to up its game in respect of the apps, as this is the part of the wider NAS solution that those competing with QNAP and Synology have often chosen to ignore.

For those who want more drive space, the AS3304T is around £400 in the UK and US$329 from online retailers in the USA like Newegg and Amazon.

All those prices are without any drives, as this machine comes in a ‘bare’ state, meaning you will need to budget for those in addition.

In terms of pricing, that’s almost identical to the Synology DS218, but 30% more expensive than the similar DS218 Play. The Play uses the same SoC but only has 1GB of RAM and a 1Gbit LAN port.

If you’re not sure which to buy, check out our best NAS drive chart.

The AS3302T is about one thing, 2.5GbE, and if you’re not interested in that technology, then it might not be for you. That’s not to say that it isn’t a solid NAS option, but if you remove the 2.5GbE factor, it competes with the four-year-old Synology DS218 with a similar application collection.

The new ADM 4.0 OS is an improvement over the previous release and provides a responsive interface to the truckload of functionality that Asustor put in this box.

I think this unit should be a little cheaper to drive home its networking advantage. Most home customers will need to invest in a new switch and enhanced adapters to use the extra 2.5GbE LAN performance, and those additional costs could make it a more difficult choice for them.

But for those wanting to see 250MB/s file transfers to their NAS, this solution outperforms dual-link 1Gbit aggregated designs, and it’s also significantly cheaper than most competitor devices with dual LAN ports.