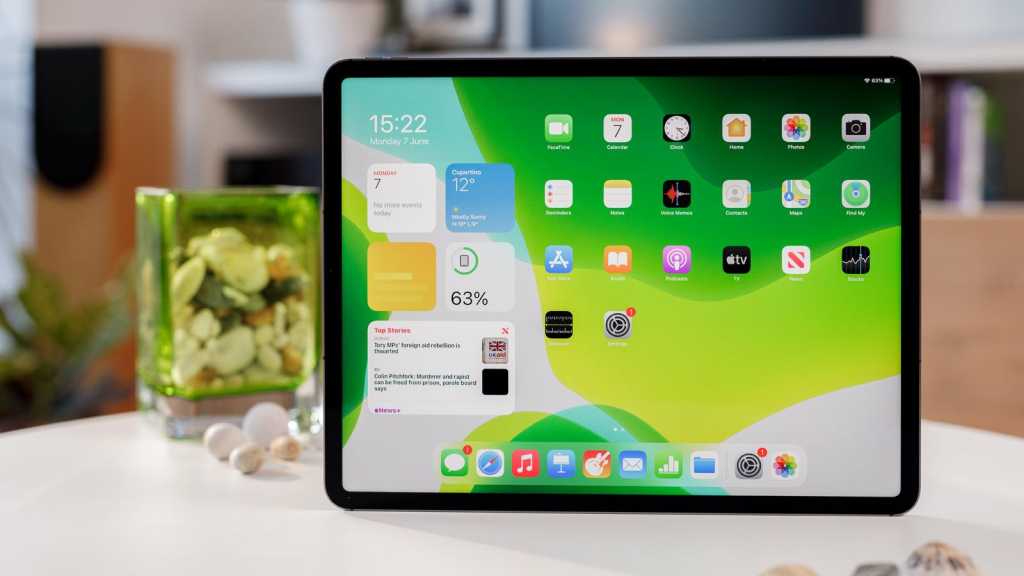 The new iPad Pro is overkill for most people, but for those who need its immense power or just want a large-screen iPad with a fabulous display, it’s the best of the best.

Apple doesn’t have a whole lot of competition when it comes to premium tablets. The iPad, and specifically the iPad Pro, remains in a class of its own. Windows tablets, even for me – an ardent Windows fan – offer weak competition because Windows 10 is such an awful tablet operating system.

Windows 11 looks to improve things significantly on devices such as Samsung’s Galaxy Tab S7+, but iPadOS is already way ahead, even if there’s plenty Apple could do to make it even better for iPad Pro users who want to use their tablet for real work. And yes, iPadOS 15 will bring some features users have been waiting patiently for. So come September/October this year, the iPad Pro will get better still.

But here, I’m talking specifically about the latest iPad Pro 12.9 which is the best tablet Apple has ever made. It might look the same as its predecessor, but there are wholesale improvements that elevate it to another level.

There are two big features here: the M1 processor and the Mini-LED screen, which is exclusive to the 12.9in model – the 11in sticks with a more traditional IPS display. But beyond those, there’s Thunderbolt 3, USB 4, 5G support for cellular models, an upgraded front camera that tracks you and keeps you in the frame in video calls… the list is surprisingly long.

You can even have 2TB of storage, if you want it. This isn’t some minor refresh: it’s a big deal. 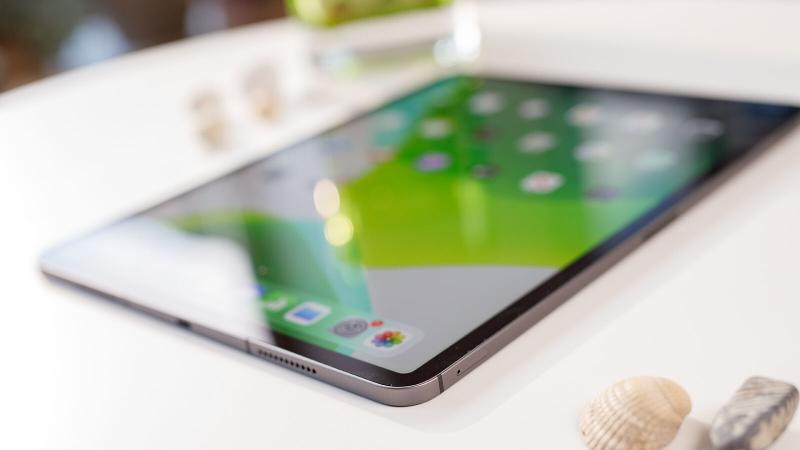 Though Apple hasn’t changed the design for 2021, the iPad Pro 12.9 still looks great. If you haven’t upgraded your iPad for a while, or never owned an iPad Pro, the squared-off edges feel very different from older generations with their rounded edges.

The bezel is slimmer and the whole tablet is a lot smaller than the first and second-generation 12.9 models. Yet the screen, obviously, stays the same size. 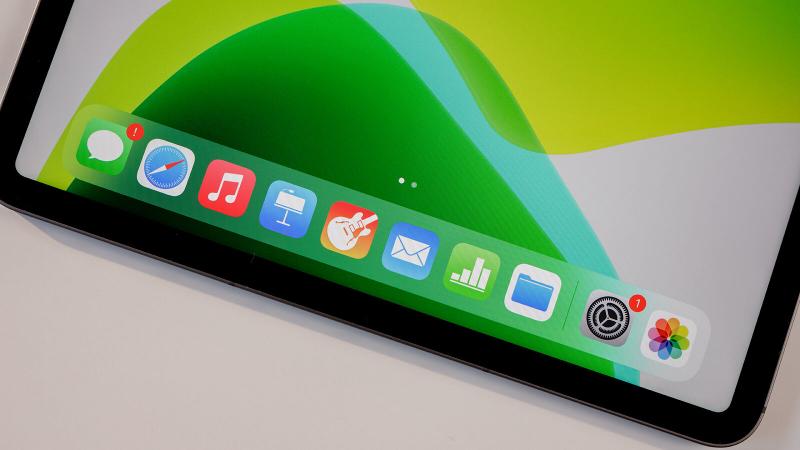 Yet, if you haven’t used a 12.9in iPad, it’s advisable to head to an Apple Store, or another retailer where you can try one. It doesn’t sound much bigger than a regular iPad, but you might be surprised. The extra size is great for many things: watching movies, looking at photos, sketching or simply browsing websites.

The Face ID system hides almost invisibly in the top or side (depending upon how you’re holding the tablet) and a message will pop up to warn you if you’re covering it when it’s trying to recognise you. 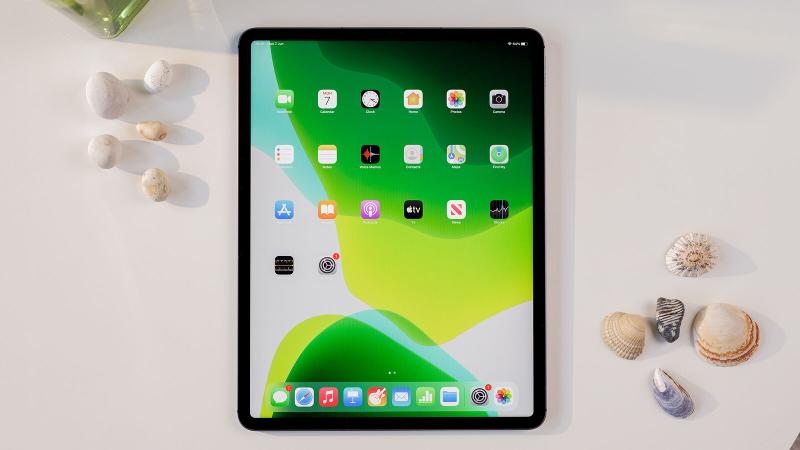 A magnetic strip on top (when in landscape) holds the second-gen Apple Pencil, which also charges there.

As with all iPad Pros, there are four speakers with a tweeter and woofer at each corner which automatically adjust to the orientation you’re holding the device, with mid-range and high-frequency sounds always coming from the top-most speakers. For a tablet, they sound pretty amazing. 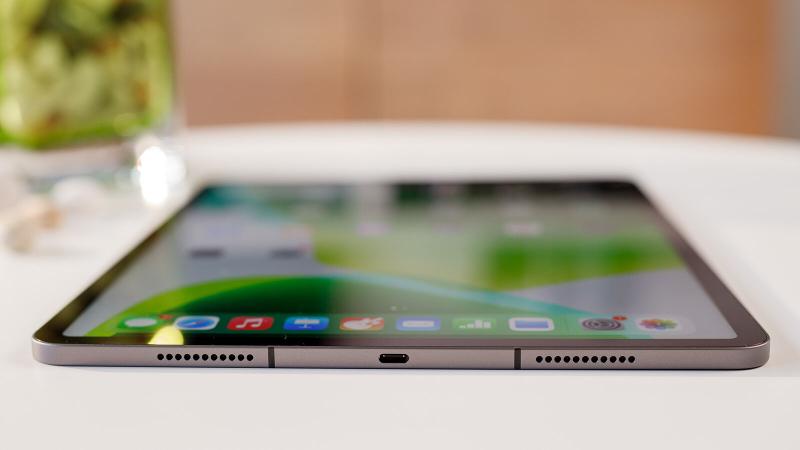 In case you’re not up to speed, there’s no Lightning port here: it’s USB-C, and supports Thunderbolt 3 for transfer speeds of up to 40Gbps.

You can plug in external storage (anything that reads and writes on a Mac will work) and external displays – it’ll even drive Apple’s 6K Pro Display (but still can’t extend the desktop on it: the usual iPadOS 14 mirroring limitations remain).

Or you can buy a USB-C to Lightning cable and use the iPad’s battery to charge your iPhone like a power bank. There are many uses for it. Since there’s just the one port, you can connect a USB-C dock – pretty much any will work – it doesn’t have to an Apple-specific one.

The big change is the switch to Mini-LED. What this means is that, instead of having just a few LEDs providing the backlighting for the LCD screen, the new iPad Pro 12.9 has more than 10,000 of these even smaller LEDs across the whole panel. 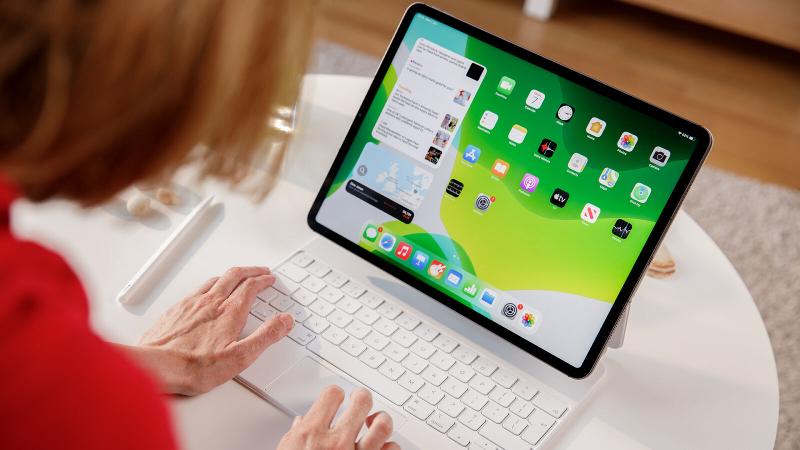 They can be controlled in groups of four, which means there are 2,500 ‘zones’ that can be turned on or off independently, leading to much-improved contrast. It’s the same as full-array local dimming on high-end TVs, but on a much smaller panel.

It also enables high brightness, with a peak of 1600 nits used for ultra-bright areas when playing back HDR video, for example. That’s four times as bright as many tablets, and it means pros can use the iPad Pro for editing HDR video.

In normal use, the display will run at a maximum of 600 nits, which is plenty even for outdoor use and double many laptops. The entire display can be run at 1000 nits when necessary.

Resolution remains the same as before, 2732 x 2048, and as you’d expect, it still offers P3 support for accurate colours, up to 120Hz refresh and True Tone for accurate white balance no matter what the ambient light is like.

It’s also worth noting that the displays are individually factory calibrated, and the glass on top has a coating which reduces reflections – and it really works well.

Apple went for Mini-LED instead of switching to OLED (which it uses for iPhones) because IPS still offers better colour accuracy and in combination with Mini-LED, allows that extreme brightness and contrast that beats current OLED technology. 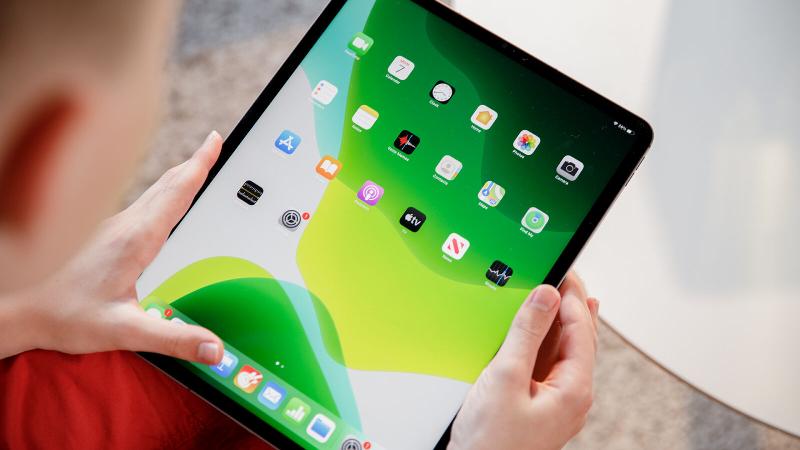 Blooming, though, is a disadvantage. On especially dark images with bright elements (such as the white Apple logo on the black loading screen) you can notice a glow around the edge of the bright object – particularly in dark rooms – which Apple acknowledges.

However, in real-world use, it really isn’t noticeable and doesn’t detract from what is a phenomenal display.

When Apple revealed that it had put the M1 chip from its recent Macs into the iPad Pros, it was a big surprise. Historically, they’ve used beefed-up versions of iPhone chips, but now you have desktop-level power available.

If you’re only going to use it for basic tasks, you’re not going to notice a whole lot of difference in speed and responsiveness compared to older iPads: iPadOS is always buttery-smooth.

Where it will come into its own is for things that need loads of processing power, such as multi-camera video editing, 3D work, multi-track music projects.

In Geekbench 5, the newcomer scored an average of just over 7000 in the multi-core test after several runs which, to put that in context, is massively faster than the 4500-odd that last year’s iPad Pro 12.9 managed, and even that was ahead of the Microsoft Surface Pro 7 (Core i7).

It’s also well over twice as fast as the Galaxy Tab S7+ (2852), which is one the iPad Pro 12.9’s closest rivals with its DeX software making it run a bit like a laptop.

That demonstrates the sheer amount of power on tap, but synthetic benchmarks are only really useful for this kind of comparison: it’s real-world performance that matters. 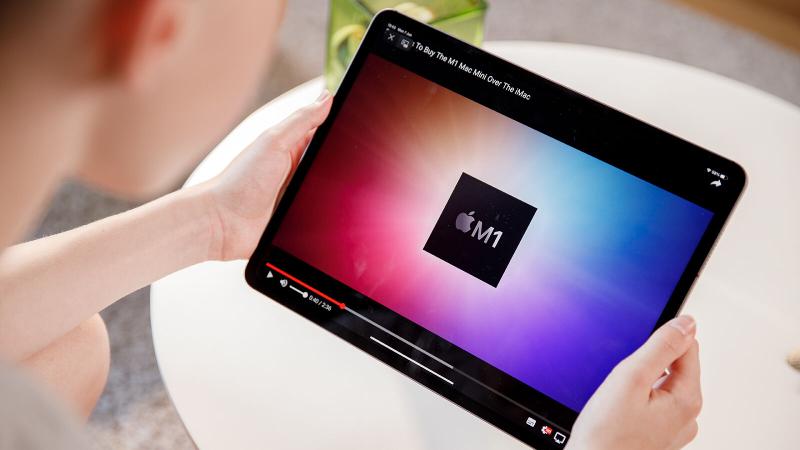 And in just about everything I tried, the new iPad Pro felt like a high-performance computer. It’s partly because Apple controls software and hardware, which leads to fantastic responsiveness whether you’re just swiping between home screens, playing demanding games or using the Apple Pencil to draw or even edit a document.

Note that 512GB models and under have 8GB of RAM, and the 1TB and 2TB models have 16GB.  Apple sent over the 512GB version for review, but without a 16GB model to benchmark against, it’s not possible to say how much of a difference in performance there is.

What was noticeable is that certain tasks, such as exporting a video from the Memories section in Apple Photos wasn’t any quicker compared to an iPad Pro several generations older.

The point is: the M1 chip clearly has deep reserves of power, but it could be a while before we fully get to see what it’s capable of on the iPad Pro.

At the rear nothing has changed from last year. There’s a 12Mp main camera, plus a 10Mp ultra-wide, along with a LiDAR Scanner for accurate depth sensing. That’s put to use for portrait photos, but more iPad Pro owners are likely to use it for AR apps than photography. 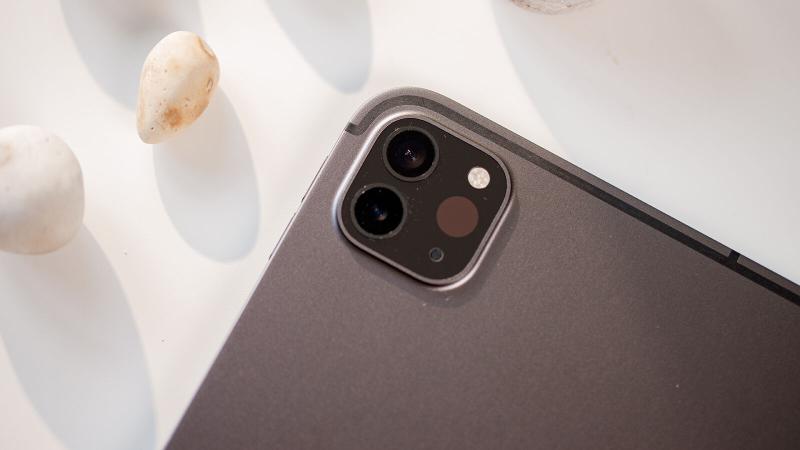 If you do want to use a huge iPad as a camera, then the quality on offer is very good but it’s at the front where the real change has been made. The older 7Mp camera has been replaced with a 12Mp sensor and it can now track you and keep you in the frame if you’re moving around while on a video call – in FaceTime and other video apps such as Zoom. It doesn’t work in every app though, as I found out when using Slack.

Where supported it works well, just like on the recent Amazon Echo Show 8 and does make the iPad Pro a little better for remote working. However, the fact the camera sits at the top when holding the iPad portrait means it’s awkwardly on the left-hand side when docked in the Magic Keyboard – and any other keyboard cases.

In our tests, the iPad Pro lasted a little over 10 hours of continuous use. That will vary depending upon what you’re doing, but for watching videos and tasks that don’t put a strain on the M1 CPU, the all-day battery claim is as true as ever.

More intensive tasks will see you reaching for the included USB-C charger sooner – between six and eight hours if you’re gaming or using apps that demand a lot of GPU and CPU power. 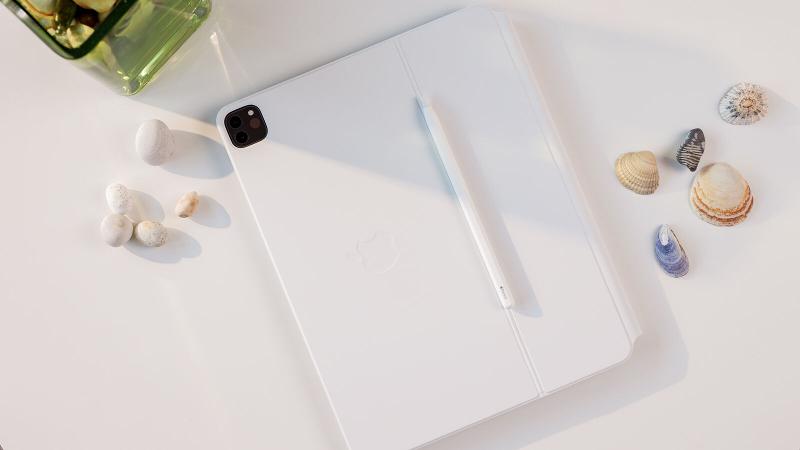 Recharging is no different from the 2020 model: after 30 minutes from empty, the battery had reached 18%. A full charge takes about 3 hours so it’s not particularly fast.

As ever, the 128GB base storage is really too small, which means you’ll inevitably decide to step up the ladder at least one rung to 256GB, and that’ll cost you an extra £150/$200.

Want 2TB? That basically doubles the price of the entry-level model, and it’s even more if you also need a cellular model with 5G. 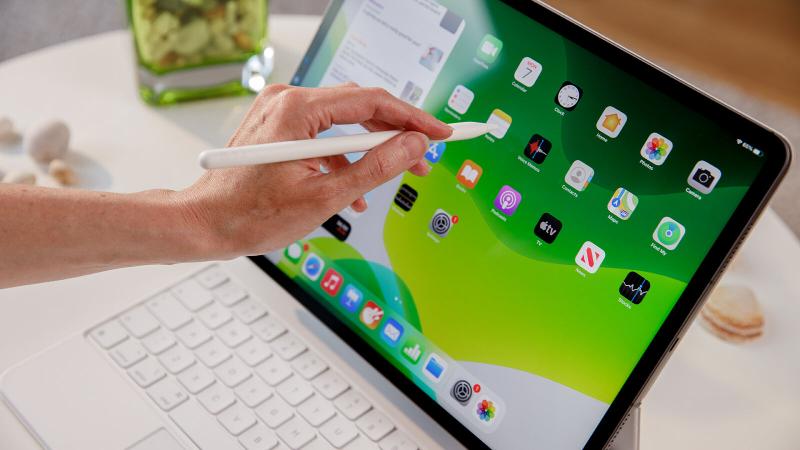 And that’s not the end of it. You’ll probably want an Apple Pencil or a keyboard case and these accessories are shockingly expensive. The Magic Keyboard for the 12.9 costs £329/$349, and the 2nd-gen Pencil is £129/$129. There’s a much cheaper (but still pricey) Smart Keyboard Folio, but that doesn’t have a touchpad.

At least the keyboards now come in a variety of languages, including British English with a ‘£’ sign, something which used to be a bugbear of overly expensive iPad Pro accessories. 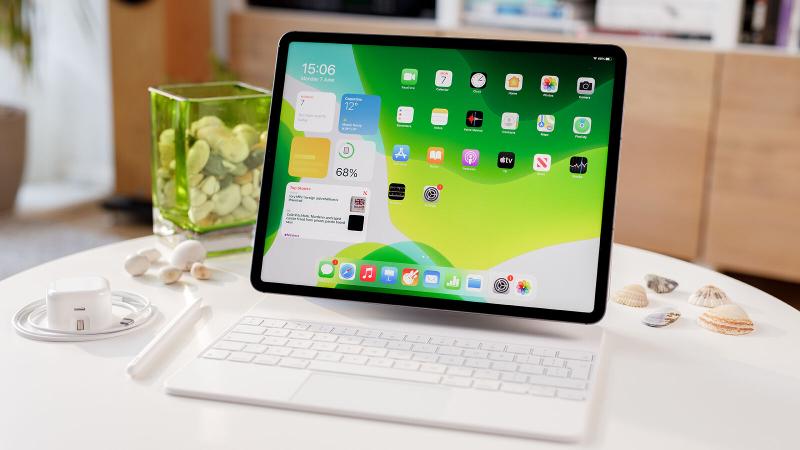 If the cost is too difficult to justify, then you could look to the Samsung Galaxy Tab or Microsoft Surface Pro ranges; perhaps even the iPad Air if you don’t mind a smaller screen.

Check out our chart of the best tablets and take a look at our best 2-in-1 laptop roundup as well if you need something for work.

The 2021 iPad Pro 12.9 is hard to fault. It really is an impressive device, though arguably overkill for most people.

Pair it with a Magic Keyboard (read our 2020 iPad Pro 12.9 review for more details) and it goes a very long way to replacing a laptop – especially if you don’t need to use obscure software that will only run on a Mac or PC.

But it will almost certainly cost more than even a high-end laptop – even a MacBook Pro 13 – so you’ve really got to want and utilise the tablet design and touchscreen here.

Multitasking is about to get better in iPadOS 15, and more apps will surely begin to really exploit the incredible performance on offer. But even right now, if you can justify the high cost, it’s simply the best tablet money can buy.