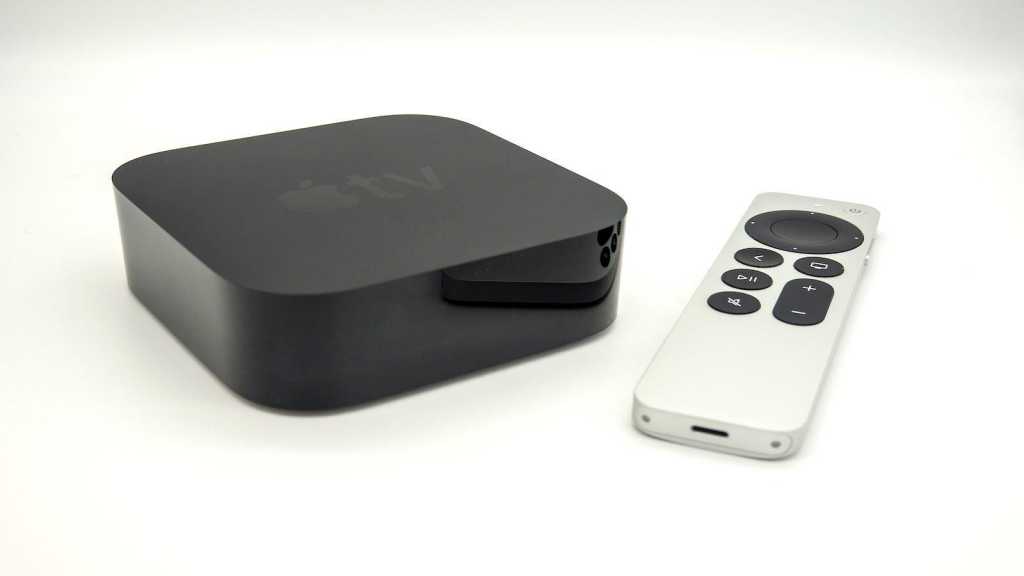 Though not much has changed with the Apple TV itself, the redesigned Siri remote makes all the difference to the overall experience.

After much speculation, Apple revealed the new Apple TV 4K at its April 2021 event. While the media streamer might not look any different on the surface, there’s one big change: the Siri remote. Easily the most complained about feature of the original Apple TV 4K, Apple went back to the drawing board, producing something more traditional – but still distinctly Apple – this time around.

There’s also an upgraded chipset, replacing the ageing A10X Fusion processor with the A12 Bionic enabling high framerate HDR playback and improved gameplay performance, and there are a handful of software improvements too. The question is, is it enough to justify the premium price when there are plenty of cheap 4K streamers right now? Well…

The Apple TV 4K (2021) has the same design as its predecessor; it’s essentially a black box with a matte finish and a subtle Apple logo on the lid, flanked by a glossy finish on the sides to add to the premium look.

There’s a single white LED on the front to indicate power and input, and it’s slightly raised at the bottom to accommodate the downward-facing fans, helping to keep the system cool and running well.

On the rear, you’ll find an upgraded HDMI 2.1 port capable of supporting up to 4K@120Hz (although the unit itself caps out at 60Hz) along with an Ethernet port – although there is also Wi-Fi available for ease of use – and a power port.

The all-black nature of the Apple TV means it blends well into its environment, but it’s not the smallest media streamer you’ll find in 2021, measuring in at 98 x 88 x 35mm.

The good news is that, because the Apple TV remote relies on Bluetooth in place of the inferior IR to control the Apple TV, the unit doesn’t have to be sat next to your TV – you can hide it in a TV cabinet and still achieve full functionality. Out of sight, but not out of mind.

The good news is that the new Siri remote is a complete redesign of the original, opting for a thicker and heavier 64g build that feels more substantial and comfortable in the hand, and it makes it easier to find the remote when it inevitably slips down the side of the sofa too.

There’s a slight curvature to the rear that helps the remote sit in the hand more comfortably, and it makes it easier to pick the remote up from flat surfaces too – no longer will you need to slide the remote to the edge of a table to pick it up.

The large touch panel has been replaced by a handful of buttons and a wheel that offers both click and touch control. It’s easy to see the logic – it allows Apple to offer swipe-based gestures for quicker scrolling and click-based controls for finer control – but it can take a bit of getting used to.

For the first few days, I’d glide my fingers over the circular control forgetting that it’s also swipe-based, often resulting in a miss-selection, but I eventually adjusted. There is a way to switch to click-based input exclusively in the Settings menu, but it does curtail just how handy the new remote can be for navigation.

You see, Apple has worked new functionality into tvOS to take advantage of the circular trackpad on the new Siri remote. The most notable is the improved scrubbing when watching videos, allowing you to run your finger around the circular button to jump forwards or backwards to a specific scene.

The catch is that, right now, not all streaming apps support it, with the likes of Netflix, YouTube and Disney+ yet to implement the functionality, although it’ll likely happen at some point soon.

Circular trackpad aside, there are a smattering of returning and brand-new buttons. You’ll get the same home, back and volume buttons as the original, along with a new mute button and a dedicated power button to quickly turn off your Apple TV and connected devices – as long as your TV supports HDMI CEC, that is.

The Siri button has also made a return, but you won’t find it on the front of the remote this time around. Instead, much like iPhones, you can now activate Siri via a discreet side-mounted button. The new layout will take any existing Apple TV owner a few days to adjust to, but the rejigged layout really does make for a smoother experience overall.

But, despite the added thickness and the fact that everybody has lost a TV remote at some point in their lives, Apple decided not to include its W1 chipset within the new Siri remote to allow AirTag-like Find My connectivity – something that would’ve really set the Apple TV apart from the competition.

There are third-party 3D-printed cases that’ll let you attach an AirTag if you are really prone to losing it, but there’s nothing official from Apple.

The new Apple TV 4K runs tvOS 14 out of the box, offering a slick operating system that’s much cleaner and more intuitive than the ad-packed options available from the likes of Amazon, and you can even organise your library of apps (downloadable via its own App Store, by the way) into folders just like an iPhone or iPad.

There are certainly elements of tvOS inspired by iOS, making for a familiar experience if you’re already a part of the Apple ecosystem, and even if you’re not, the flurry of tips and tricks presented to new users will get you up to speed pretty quickly.

The new Apple TV 4K is powered by the same A12 Bionic chipset found in the iPhone XS – a big jump from the ageing A10X Fusion in the older 4K model, and it’s noticeable in use too.

While the 2017 model occasionally stutters, there’s no such experience on the new model, swiping between apps on the Home screen, switching apps and even playing Apple Arcade games without a hint of stutter or lag.

The latter is particularly impressive as, even though Apple Arcade has supported Apple TV since its inception, the hardware on offer from the older model wasn’t enough to even hit a stable 30fps in particularly demanding titles like Oceanhorn 2.

That’s certainly not the case this time, allowing casual gamers to enjoy the growing library of Apple Arcade games on the big screen – and you can even use the latest DualSense and Xbox Series X controllers to play if you’ve got them handy.

Aside from a general boost to performance, the inclusion of the A12 Bionic allows the new Apple TV to support high framerate HDR content. While it’s not supported by every app, there’s definitely a difference to high-speed events streamed via the recently updated Red Bull TV app, offering smoother and clearer visuals than what was possible from its predecessor.

Like the new scrolling functionality, it’s a feature we imagine most streaming apps will take advantage of over the coming months – especially those focused on fast-paced visuals where the difference is most notable.

One big perk for HomePod owners has always been the ability to stream Apple TV content via the smart speaker, often resulting in better quality audio than built-in TV speakers and cheaper soundbars, but the functionality has been limited to Apple TV content.

That means audio from a Blu-ray player or console wouldn’t be funnelled through the wireless speakers – but that has changed with the new model, which uses HDMI Arc or eARC to take your TV’s audio output and stream it to HomePod speakers regardless of the source.

The only issue is that Apple has officially discontinued the HomePod and it’s not compatible with the smaller HomePod Mini, so you might have a hard time picking a speaker up if you don’t have one already.

There’s also the ability to use a Face ID-enabled iPhone to professionally colour grade your TV – all you need to do is start the setup, hold your iPhone up to the TV and wait while the TV cycles between various colours. While the results will vary depending on just how accurate your TV colour balance is, I was impressed by the tweaked colour profile presented.

You can flip between the original and Apple’s colour grading to see which looks better – in my case, my standard TV picture was a little too blue, so the Apple TV added a splash of orange to balance things out – and you can revert at any time if you change your mind.

Siri is another strong point of the Apple TV experience. Not only can Apple’s virtual assistant handle complex queries like ‘Show me funny kids movies from the 90s’ but you can say things like ‘what did they say?’ when watching a TV show to get Siri to automatically rewind by 15 seconds and temporarily enable subtitles. It’s an experience unmatched by the likes of Amazon, Roku and even Android TV.

There are also the smaller elements of tvOS that complete the signature Apple ecosystem experience, like being able to enter text on a nearby iPhone when you need to enter a password or search query on the TV, the ability to connect multiple pairs of AirPods at once for private listening, multi-user support, and the Apple TV app which acts as a hub for all your favourite shows across multiple streaming apps – although annoyingly not Netflix.

The catch is that most of these features, bar the high framerate HDR enabled by the A12 Bionic and the ability to use HomePods as a home cinema system, are also available on the 2017 model of Apple TV 4K, making it harder to justify the upgrade if you only use the Apple TV to stream movies.

The new Apple TV 4K comes in two variants – 32GB and 64GB – and cost £169/$179 and $189/$199 respectively. If that sounds familiar, it should; it’s the same storage and pricing as the now-discontinued Apple TV 4K (2017) in the US, while those in the UK get it for £10 cheaper than its predecessor. Both models are available directly from Apple alongside retailers like Amazon, Currys and Best Buy.

It’s undoubtedly one of the more expensive media streamers available right now, but given the benefits, performance, and functionality on offer, it’s a price worth paying – especially if you’re already in the Apple ecosystem. For a better idea of the streamer market, take a look at our selection of the best media streamers.

The new Siri remote is also available to buy separately for existing Apple TV owners that don’t want to splash out on an entirely new system, costing £55/$59 from the Apple Store.

The new Apple TV 4K fixes some of the biggest complaints with the first-gen 4K streamer, including a much more powerful processor capable not only of handling the latest Apple Arcade titles, but high framerate HDR playback and the ability to stream any TV audio to HomePods wirelessly too.

The biggest improvement, however, is in the remote department. Apple completely redesigned the touch-based Siri remote bundled with the original, opting for something a little more traditional – with signature Apple features – that feels good in the hand, and it’s great to use too.

The problem is that most software features are also available on the older model, making it a little harder for existing Apple TV owners to justify the upgrade.

Still, if you want to take advantage of the new features enabled by the A12 Bionic, and you love the look of the new Siri remote, the Apple TV 4K is one of the most capable media steamers you can buy right now.