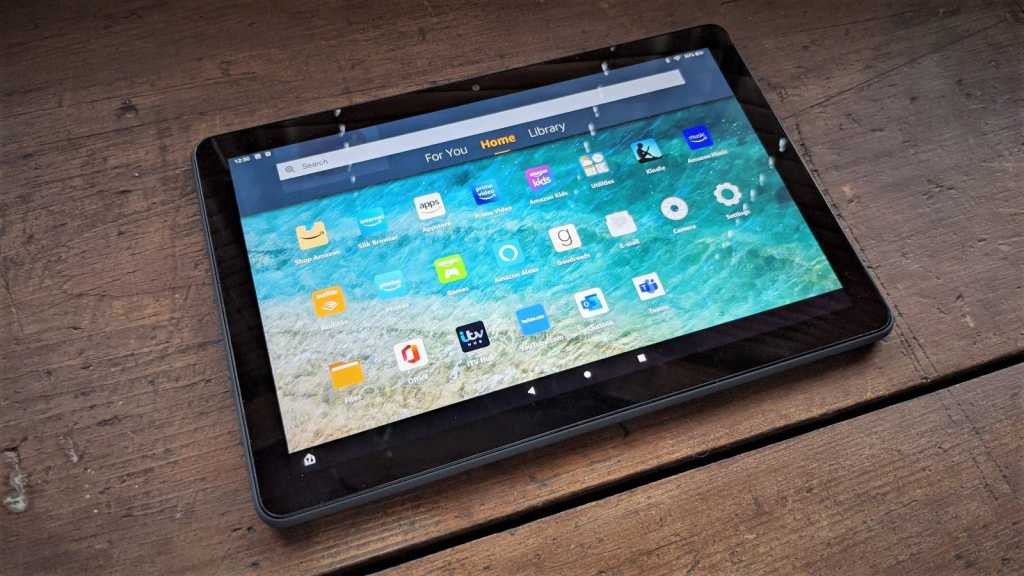 If you’re looking for a budget 10in tablet for a range of tasks then the Fire HD 10 is easily one of the best. Just check it has all the apps you need first.

Amazon is back with yet another new version of its Fire HD 10 tablet. Now in its 11th-generation, the 2021 model brings a few small improvements and is even pitched as a productivity device.

You heard that right: Amazon now sells a Fire HD 10 Productivity, which bundles the tablet with a Bluetooth keyboard case and a year’s subscription to Microsoft 365 so you get Word, Excel and other apps.

It does a surprisingly good job of being a little laptop if you don’t need to go beyond reasonably basic tasks.

And if that’s not of interest, the Fire HD 10 is a great entertainment tablet starting at just £149/$149. Confusingly, there are many different versions of the tablet including a new Plus model which is essentially the same but also has wireless charging and an extra 1GB of RAM. It’s also available as a Productivity bundle, and this is the version Amazon sent for this review.

A new tablet rarely looks dramatically different but it’s clear Amazon has made some refinements here compared to the previous version of the Fire HD 10 which launched in 2019.

For starters, it’s a reasonable amount lighter at 465g as opposed to 504g making it more comfortable to use. I like the soft-feel matt finish and the Fire HD 10 is available in Black, Denim, Lavender and Olive.

Note that the Plus model I was sent only comes in a grey called Slate.

It’s quite reminiscent of the Tesco Hudl 2 from 2014, showing how much budget tablet design has come on over the years.

Amazon is pitching it at more landscape use with some small tweaks you might not immediately notice, such as moving the webcam to the longer side, just as you’d find on most laptops. It also looks more stylish with slightly more rounded corners and thinner bezels.

Part of the reason for the switch to landscape is that Amazon sells the Fire HD 10 with an optional Bluetooth keyboard – made by Fintie – which turns it into something resembling a mini laptop. It offers a pretty good typing experience and has shortcut keys, although not all the ones I’d like.

Usefully, the tablet can be detached from it thanks to magnets, but when attached doesn’t angle backwards very far. As well as the keyboard, the Productivity bundle also comes with a 12-month Microsoft 365 Personal subscription.

As the name suggests, there’s a 10.1in screen with a Full HD resolution 1920×1080 pixels. It’s not much different from the screen on the 2019 Fire HD 10 and is a decent display considering the low price. The IPS panel provides good viewing angles, punchy colours and there’s plenty of brightness – 10% brighter than previous generation, according to Amazon.

Inside is the same octa-core processor but Amazon has increased the RAM by 50% to 3GB (4GB for the Plus model) giving it a better ability to handle multi-tasking. Another sign, along with the Productivity bundles, is that this edition is pitched as more than just a tablet to watch videos and use social media. A cheap alternative to a Microsoft Surface Go or even an iPad, perhaps.

In general use, both the Fire HD 10 and Plus models are nippy and can swap between apps without much hesitation. Do remember this is a budget tablet, so don’t set your hopes too high: performance isn’t iPad-smooth.

We use Microsoft 365 for work and I was able to log into my account just like I would on a laptop and instantly access all my files. We have an epically large spreadsheet used for planning and the Fire HD 10 handles it surprisingly well.

What isn’t so good, if you are going to use the tablet for a company account, is that you may be asked to encrypt the storage in order to use Outlook. A pop-up message warns this may result in ‘significantly slower device performance’. However, this isn’t aimed at corporate use, and is designed for Microsoft 365 Personal.

The rear camera has been bumped from 2- to 5Mp but remains mediocre in terms of quality, performing badly in low light. The front camera is arguably more useful and is still 2Mp. It’s good enough for video calls with better detail than some laptops we’ve tested recently.

Connectivity comprises USB-C for charging and a headphone jack. Internally, there’s no upgrade to Wi-Fi 6 but that’s acceptable at this price but you do get an upgrade Bluetooth 5.0 LE.

Stereo speakers sit on top when you have the tablet in landscape mode and sound reasonably good, although nothing special. You get the usual lack of bass and there’s distortion at higher volumes. They support Dolby Atmos but this seems to be a tick-box exercise only and doesn’t really do much in terms of a spacious sound field.

Battery life is still quoted at 12 hours and I think you’ll get that with varied usage. For video playback, I found it to match the previous model at around 10 hours.

Sadly, that USB-C port doesn’t offer any kind of fast charging and the supplied 9W charger will take around four hours to fully charge the Fire HD 10’s battery. The Plus model I’ve tested comes with wireless charging; a little odd for a tablet having to balance it on a charging pad but it works and is faster than wired at 15W.

Amazon mentions a Wireless Charging Dock for Fire HD 10 Plus made by Anker, but this isn’t on sale at the time of writing.

As you probably already know, Amazon uses its own operating system called FireOS which is based on Android. Surprisingly, it’s the older Android 9 Pie – Google isn’t far off releasing Android 12.

While that is somewhat irrelevant, it’s slightly worrying on a security front. Version 9 Pie is still getting support and updates so it isn’t an issue and I assume Amazon will move onto Android 10 when necessary.

The user interface is very different from other Android tablets and is, as you might expect, centered around Amazon’s services and content.

Whether this works for you largely depends on whether you’re an Amazon customer or plan to sign up to services such as Prime and Kindle Unlimited.

Even if you’re used to normal Android tablets, you’ll get used to Amazon’s version after a while. The bigger issue – as ever – is that there’s no Google Play Store. So don’t assume the apps you normally use will be available.

There are plenty of popular ones including Netflix, BBC iPlayer, Facebook, Spotify, TikTok, Sonos, Disney+ and many more. But you can’t get Google Chrome (or other Google apps officially), Slack, Fortnite or banking apps such as Monzo.

Alexa is, of course, here in hands-free guise, so you can ask her questions even when the tablet is locked and with the screen turned off.

Also, the Echo Show mode is back – oddly missing from the previous Fire HD 10. This allows you to use the tablet like one of Amazon’s smart displays. There’s a simple toggle switch in the drop-down menu for it, or you can just ask Alexa to enable Show Mode. It works best when you plug in the charger.

The Productivity bundle Amazon starts at £259.97 and you can also get a more basic bundle with a protective case and NuPro screen protector starting at £202.97.

Check out our chart of the best budget tablet and best Amazon Fire tablets if you’re not sure which to buy yet.

The Fire HD 10 is still one of the best budget tablets you can buy, offering a lot for not much money.

It has an improved design, slightly better performance and other small upgrades – even if a higher resolution rear camera and Bluetooth 5.0 won’t matter to many.

If you want a 10in tablet to access popular entertainment and social media apps then it will do the job very well indeed, as long as there is support for the apps you use the most. In 2021 there typically will be, although some of the most popular mobile games are not available.

What about as a productivity device? The Fire HD 10 Plus does a surprisingly good job, so long as your definition of productivity is using a word processor, spreadsheet and sending emails: using Microsoft 365, essentially.

Of course, working on a small keyboard and display could be a sacrifice you’re not willing to make. Ultimately the experience is a compromise and well behind what you can expect from a budget Google Chromebook, let alone a laptop or Microsoft Surface.

But that’s not the biggest problem: it’s that there just aren’t enough productivity apps here: you’ll have to use Google, Slack and others via the web browser, which is far from ideal.