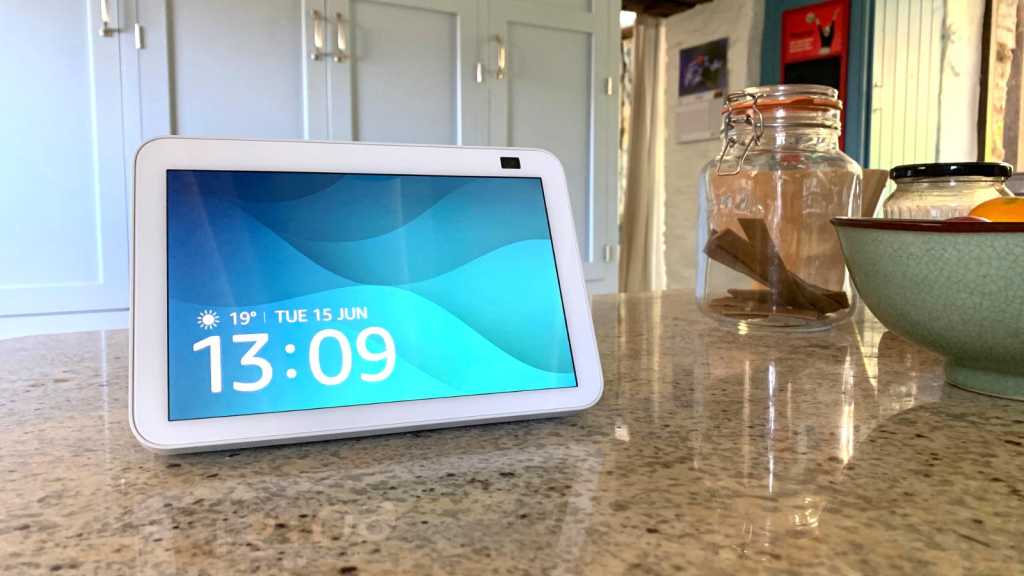 The new Echo Show 8 might be little changed from the original, but the upgraded camera, with automatic tracking and remote view, is a serious improvement. It’s a great smart display.

Amazon’s Echo range of devices is continually evolving, with the Echo smart speakers already onto their fourth generations and the Echo Show 10 smart display now on its third iteration, with a significant redesign.

The smaller-screened siblings didn’t get the same treatment, with the Echo Show 5 and Echo Show 8 receiving very little attention for their second generations.

If you’re about to buy an Amazon Echo of any description, be sure to check out our guide to the best Amazon Echo deals to see if you can get a bargain.

Although this model has been blessed with more significant updates than the Echo Show 5, much remains the same. The chassis is still the tipped-over pyramid with an 8in display on the front. A resolution of 1280 x 800 is the same as the previous version, as are the 2 x 2in neodymium speakers hidden under the fabric at the rear. 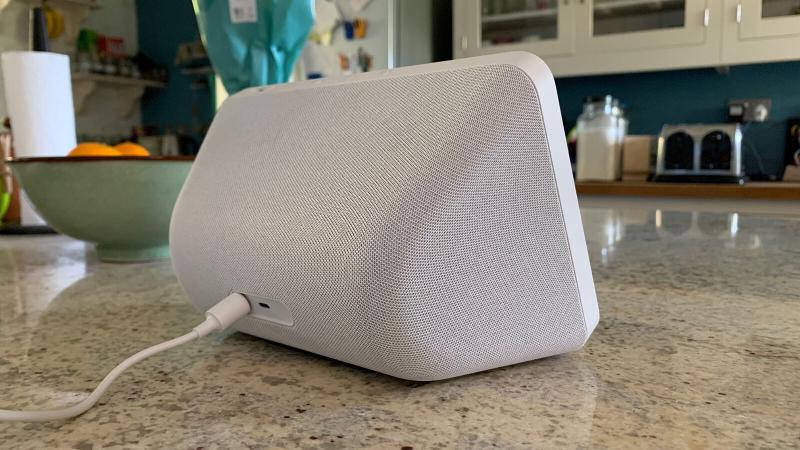 Dimensions are an identical 200 x 135 x 99mm, but the major upgrade comes in the 13Mp camera that replaces the weedy 1Mp found in the first-generation Echo Show 8. You’re still able to prevent any unwanted access by sliding a physical cover over the lens via the button on the top edge, where you’ll also find the volume controls and mute button for the camera and microphone. 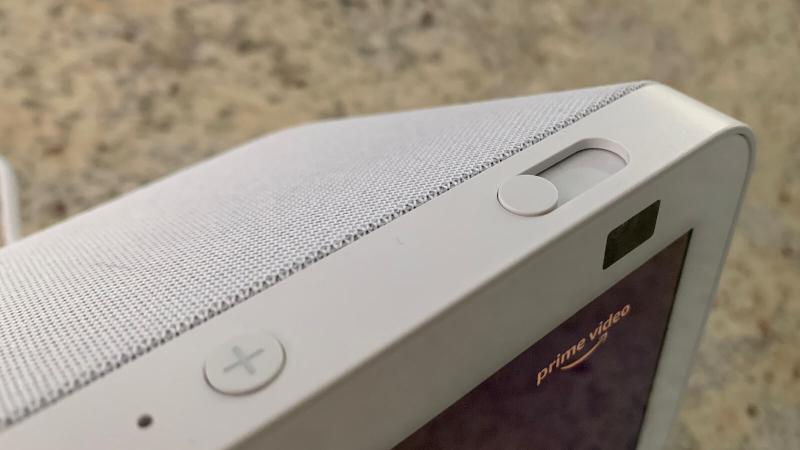 Along that top edge are also four microphones, with which Alexa hears and interprets your commands. The display is a touchscreen, so you can use a combination of voice and fingers to use the device.

On the rear there’s the power connector for the proprietary power supply, plus a micro-USB ‘for service’ port that’s not for your use. One change that some people might find disappointing is that the 3.5mm audio output from the first-generation model is now missing from the newer version, just as it is on the Echo Show 5.

If you want external audio, then you’ll need to use Bluetooth headphones or a Bluetooth speaker.

The design may be unchanged, but this is a compact, tidy package that should fit nicely into any room of the house. You can also choose between white or black models (which Amazon calls Glacier White and Charcoal respectively), but no sign of the Deep Sea Blue that’s a new option with the Show 5.

Setting up the Amazon Echo Show 8 is a painless affair, as all that’s required are your Wi-Fi network details, your Amazon account, then it’s pretty much good to go.

You’ll also want to download the Alexa app for your smartphone, as this gives you control over the various services to which the device can be linked, as well as some of the new features like the remote Live Camera Feed that allows you to turn your Echo Show 8 into a home monitoring device. More on that below.

The interface is simple, with the touchscreen elements involving swiping down from the top to open the menu which gives you access to Settings or to quickly enable Do Not Disturb. Swiping in from the right gives you access to various shortcuts, including the Smart Home controls and the Communicate option that lets you send messages to all the Echo devices on your network.

That can be handy for telling everyone dinner is ready. You’ll also find various helpful suggestions for the things you can do with the Echo Show 8. 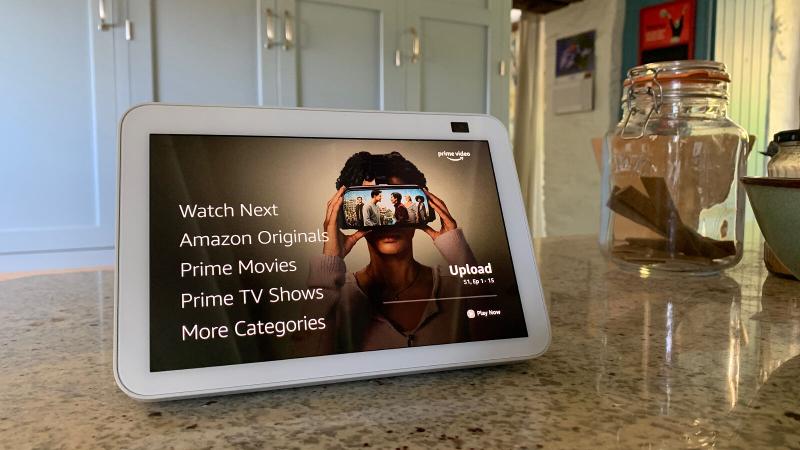 Obviously, as this is an Alexa-enabled piece of hardware, most of the interaction is hands-free.

Ask for the news and you’ll see a BBC headlines broadcast appear on the screen (but you can change this to Sky News or whatever is offered in your region), request a show from Netflix or Amazon Prime Video and watch it while you cook or get dressed (depending on which room you situate the Echo and your cooking etiquette).

The 8in display is clear and bright, but if you’re used to watching things on a tablet, then it might seem a little small. Thankfully, text is presented in a good-sized font, so reading recipes or seeing what appointments you have coming up is always legible. 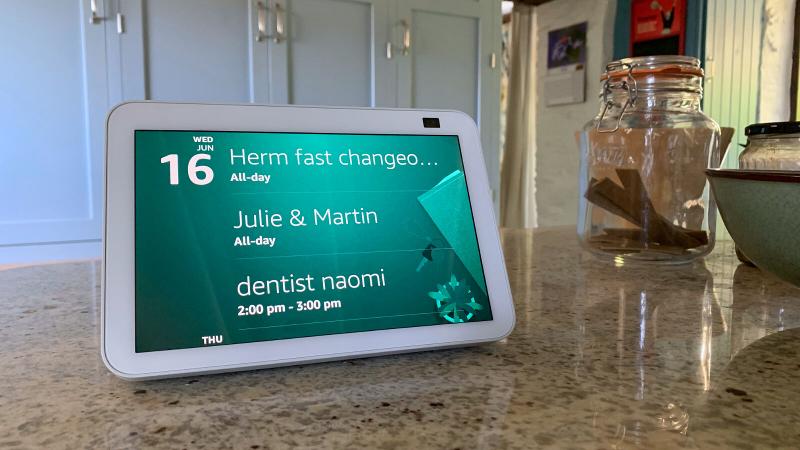 Amazon has updated the processor from the MediaTek MT 8163 to the MediaTek MT 8183, which is a minor bump. Performance-wise, this delivers response times that are a little slow at times, but nothing too ponderous and certainly acceptable for this kind of device. Bear in mind, that the strength and speed of your internet connection will also be a factor when it comes to how quickly Alexa can respond to your demands.

Of course, the big upgrade for the new Echo Show 8 is the vastly improved camera. Moving from a 1MP to 13MP sensor means that when you make video calls, you’ll look a lot clearer to those receiving your video feed. Amazon has also added a new tracking feature where the camera (aided heavily by the software) tries to keep you in the centre of the frame.

This is a very different approach to the physical rotation of the Echo Show 10, but unless you have an island in your kitchen, or some other room where you need to be tracked 360°, the Echo Show 8’s tracking works very nearly as well. 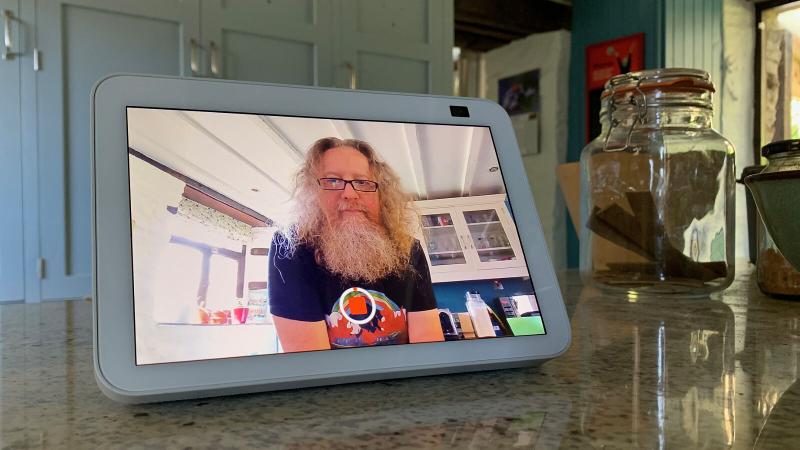 It’s subtle and works if you’re moving around reasonably slowly, but it does try its best to keep you central, zooming in to keep you roughly the same size where possible, even when you walk quite far away. Considering that this feature is achieved entirely via software, it’s impressive and adds consistency to the look of calls.

Camera quality itself is excellent. The video it produces is crisp and bright, with rich colour rendering and the sensor does a great job of preventing even badly lit rooms looking murky. As I mentioned already, there’s a new feature where you can access the camera via the Alexa app or another Echo Show. This means you could check on what the dog is up to when you’re out or monitor for any suspicious behaviour while at work.

The only problem is that, like the Echo Show 5, the fact the camera is pointing towards the ceiling means you won’t actually be able to see your dog or the floor unless you buy the optional, adjustable stand. 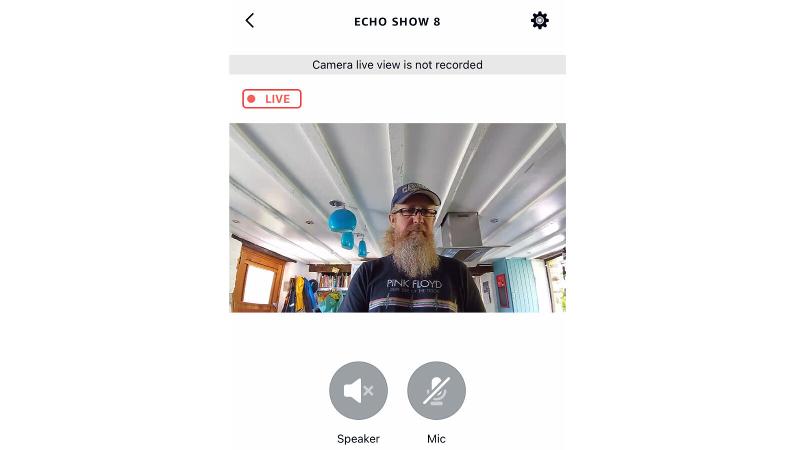 You won’t be able to spy on flatmates or family members (and no-one can spy on you) as the Echo Show 8 displays a message informing everyone when the camera and microphones are in use. I did find that the first time I set up the feature it wouldn’t recognise the Echo Show 8 as a camera that supported the live feed. But after a factory reset and going through the setup again it worked straight away. Something to consider if you’re struggling.

In the Alexa app you can create groups which include family and friends who have a compatible Alexa-enabled device, then begin a video chat to all of them by asking Alexa to call that group. Zoom calls are now included on the Echo Show 8 for US buyers, so you can join in on work calls or keep up with the family via the device.

There’s also Amazon’s own Drop-In feature where you can quickly video call other Echo Show users by simply asking Alexa to ‘drop in on’ your contact. They can of course refuse your advances, but once you and your contacts have given each other permission for calls, you can quickly ring people via the Echo Show 8 at no cost and with full HD video.

While the display and camera are one of the main reasons for buying an Echo Show 8, this is of course still a smart speaker, so sound is a large factor too. Thankfully, this is also an area that impresses.

The two 2in neodymium speakers produce some serious volume while also kicking out a surprising amount of bass, thanks to the passive bass radiator that’s part of the design. This means that you can rely on the Echo Show 8 for house parties or just to drown out the sounds of your neighbours.

In the sound department it’s not much different from the first-generation model, which was equally impressive, but as part of the overall package it does make the new Echo Show 8 a very tempting device.

As I touched on earlier, you can now access a variety of streaming services as standard on the Echo Show 8. These include video content from Amazon Prime Video, Netflix and YouTube, although the latter uses a browser rather than a dedicated app. For music and podcasts there’s Amazon Music, Spotify, Apple Music, Deezer, TuneIn, and Audible. Obviously, you’ll need subscriptions to use these services, but that’s true no matter which platform you’re using. 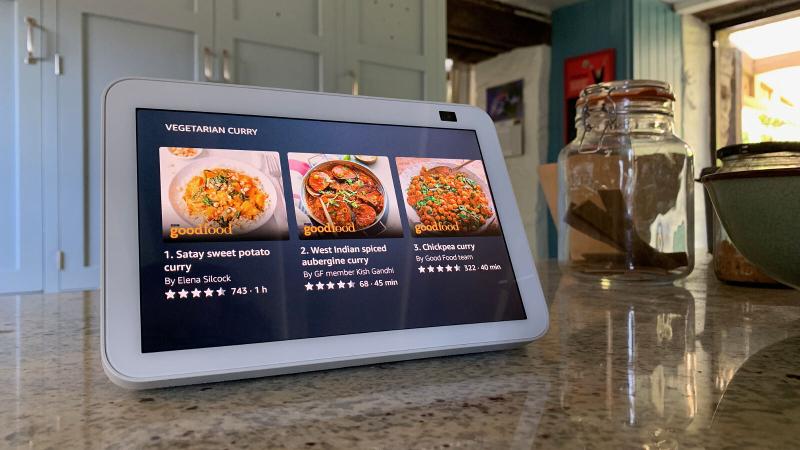 As the Echo Show 8 is a natural fit in the kitchen, you’re also able to access full recipes and instructions from BBC Good Food. Alexa will read aloud each step, while displaying the text as well as the recipe ingredients on the screen. You can ask her to repeat a step or move onto the next one as required. It’s a helpful way to prepare unfamiliar meals, and not having to touch the screen with flour encrusted hands is obviously a big help.

If dinner is a complete disaster, you can access your Headspace account for some restorative meditation, although this might be a better choice in the bedroom where you can have a lie down at the same time.

Alexa does well with voice commands, usually understanding what I requested, but sometimes there is a little lag as it accesses the web to fetch answers or content. So long as you’re not rushing to get things done, I think Alexa is maturing into an accomplished digital assistant.

As with the previous model, you can use the Echo Show 8 as a hub for your smart home devices. (Note that it doesn’t have a built-in Zigbee hub like the Echo Show 10 or Echo 4th-gen speaker, though.)

When paired with compatible smart light bulbs, cameras, and other smart tech, you’re able to create routines for certain situations. This might include setting the lights low for an evening’s Netflix session by telling Alexa ‘Night time’, or turning on the coffee machine and reading the morning headlines by saying ‘I’m up!’.

If you don’t have smart devices then you can still benefit from the latter, as well as see your appointments for the day ahead and what weather you can expect. As with all Alexa-enabled devices, you can download the huge amount of ‘Skills’ that add features to the device, making it far more than just a smart speaker with a pretty face.

The Amazon Echo Show 8 is available now from Amazon, costing £119.99/US$129.99. It’s worth checking the site regularly though, as there are often sales which usually mean decent discounts.

The second-gen Echo Show 8 is basically the same as the previous model, but the new camera and remote viewing feature is a significant step up.

Of course, you can get the previous generation device at a good discount now, but if you want to use the Echo Show 8 as a video calling device at all, then the new one is a far, far better option.

At this price and with the features on offer, I think the 2021 Echo Show 8 is the best choice of the current Echo Show lineup.