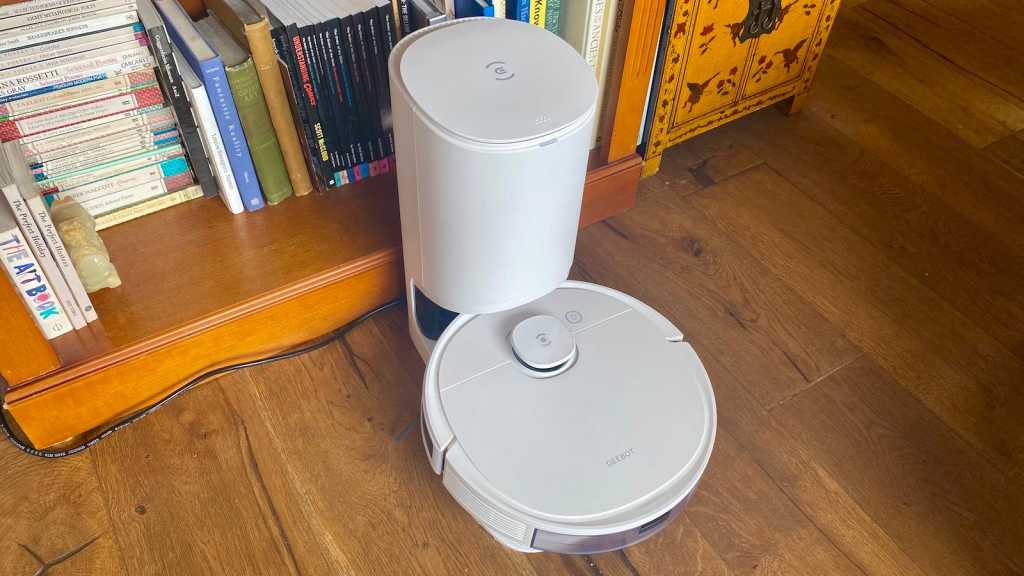 The Ecovacs Deebot N8+ has great suction but it’s slightly let down by average climbing and navigating. Still, it’s all about the self-emptying feature, and whether the additional cost and compromises are worth it to you.

A self-emptying robot vacuum cleaner sounds like a fantastic idea. It means even fewer interactions with the machine. Just set up a vacuuming schedule and let it get on with its job. You won’t need to worry about emptying the bin each time it cleans.

But, as it turns out, the self-emptying mechanism has disadvantages as well as advantages.

The Ecovacs Deebot N8+ comes in a huge box, thanks to the tall, tower-shaped dock, which stands at 42cm (16.5 inches) high.

If you use a robot vacuum cleaner, you’ve probably found a discreet spot to place it, such as under a sofa or cabinet. If you’re looking to upgrade to a self-emptying robot, you’ll probably need to find a new home for it. Not only is the dock itself tall, but the N8+ climbs a ramp to recharge, raising the vacuum itself higher off the ground.

The N8+ is traditionally shaped and just under 10cm (4 inches) high at its tallest point – the top of its laser tower. This is roughly standard size for a robot vacuum cleaner and it should be able to clean under most pieces of furniture.

Still, if you’re buying a robot vac for the first time, we’d suggest you measure the height of your large pieces of furniture to find out if it can get underneath the bed and sofas, for example. It’s disappointing if it can’t get under them – and infuriating if it can, but gets stuck every time.

The N8+ has two spinning sweepers at the front. Some robot vacs have none of these, some one and some two. In this instance, the pair of brushes are a mixed blessing as, although they give it more reach and clean right up to the wall, they tend to scatter larger crumbs, meaning that the cleaner won’t pick up everything on the first attempt. 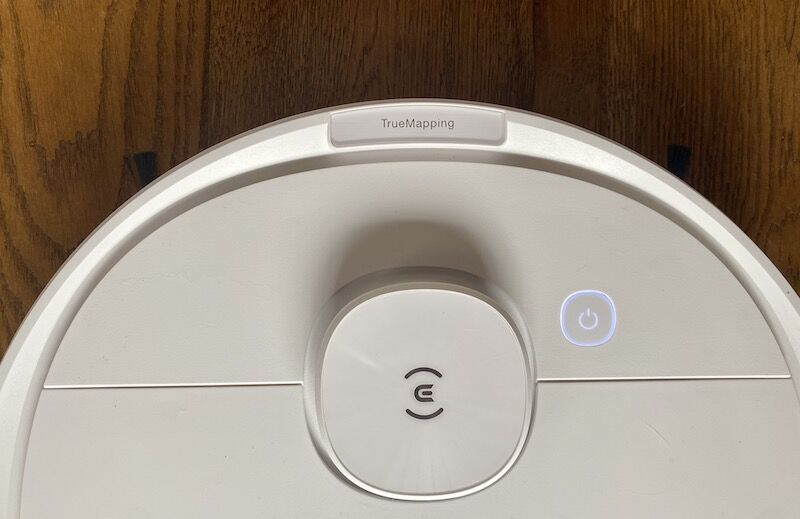 However, its 2300Pa suction is pretty powerful, so it will get the job done – even if that’s not on the first pass. Still, it doesn’t use its maximum power most of the time. Instead, if you switch on auto-boost suction, it will ramp up the power when it moves on to carpet. This gives impressive cleaning power, but it is noisy.

In its usual mode, the N8+ is extremely quiet, with its trundling mechanical sounds louder than its suction.

Set up and app

The N8+ is extremely easy to set up. Plug in the dock and set the robot vacuum charging. Download the free Ecovacs app, available for Apple and Android, find your model and connect to your wi-fi. The app will prompt you at every step and in our test, it connected immediately.

During the first clean, the N8+ will create a map of your home. After this, you can name rooms, create custom cleaning programmes and mark up areas for the robot to avoid. This means you can schedule it to mop your bathroom floor without worrying if it’ll continue on and mop your bedroom carpet.

In our test, it did well at obeying these demarcations and a virtual square blocked off on the map kept it away from a corner of the room where there was a lamp and wiring.

You can create separate maps for each floor of your home. Scheduling and advanced settings are easy to set up and navigate. 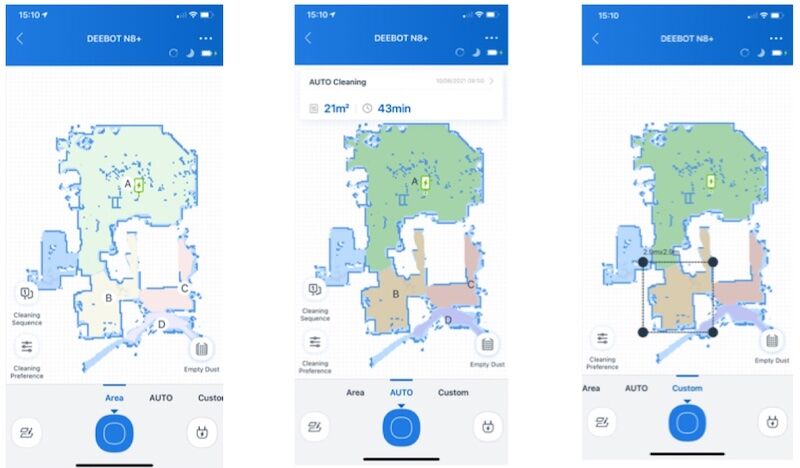 According to the Ecovacs website, N8+ has what the brand calls TrueDetect 3D technology, for obstacle avoidance. However, it doesn’t seem to work brilliantly in practice, with the N8+ bouncing off objects and butting into them repeatedly. It gets the job done but does so rather less than elegantly.

It also needs rescuing quite a lot. Before robot vacs used sophisticated navigation technology, they used to pinball around a room, getting stuck on sloped lamp stands, on doorway thresholds and other raised surfaces.

With the N8+, it feels a little bit like those days have returned. It got caught behind the sofa, in the kitchen and was unable to pass over a wide, 2cm high threshold to clean the room beyond it. Having a hands-free cleaner is of only limited use if you need to jump in regularly to rescue it.

The lack of climbing ability could be down to the weight of the additional internal plumbing, which makes the self-emptying system possible. Ecovacs’ Deebot Ozmo 920, which we reviewed and think is excellent, is a fantastic climber that managed solid cleaning in our tests without getting stuck.

The N8+ also has a mop function. It’s easy to use. Just fill the 240ml water tank and clip on the mop attachment. However, it’s only mildly effective. It’s essentially like dragging a damp cloth over the floor. You just can’t get the same pressure as if you were mopping by hand. 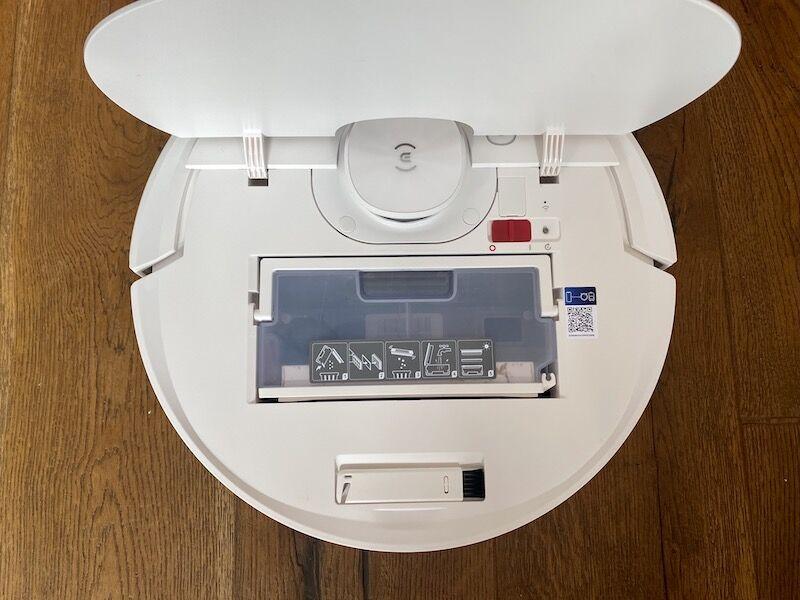 Still, to be fair, the N8+ mop is as good as most on the market and will give your floor a light clean.

After each clean, when the N8+ docks, its bin is automatically emptied. If you’re not expecting it, the noise of the suction – which is sudden and sounds like a jet engine taking off in the corner of the room – will come as a bit of a surprise. 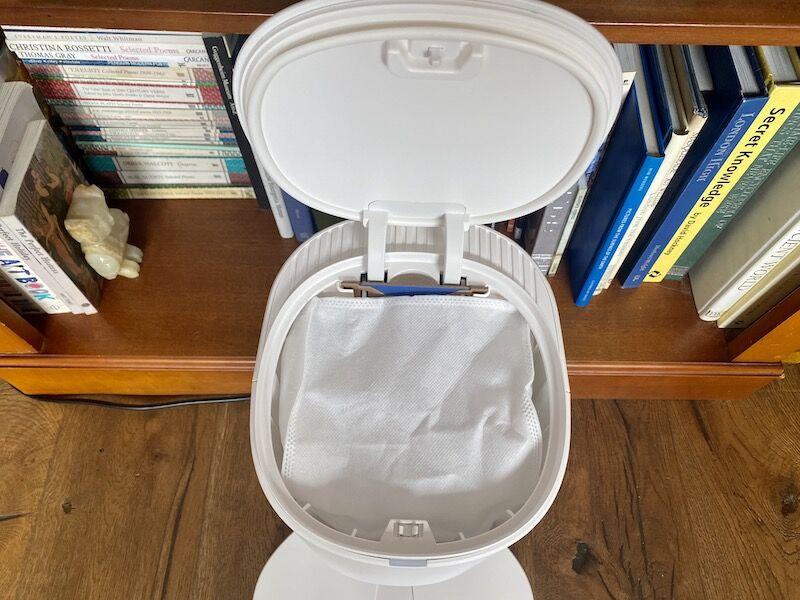 There’s also an unpleasant inside-the-vacuum-cleaner-bag odour that lingers behind for a while after emptying.

If you have a larger home and need a deep clean, you may run into problems as the N8+ doesn’t have a sensor to tell it when its bin is full. It’ll empty every time it returns to the dock but, if it fills up before the end of its cleaning cycle, it won’t return to the dock to empty. It’ll just keep uselessly driving around until it thinks it has gone over everything.

However, this wasn’t a problem in our test, as the vac was able to do a complete clean for 45 minutes each time and continued to give good suction until the end.

The bag inside the tower has a 2.5 litre capacity, which Ecovacs estimates should give you a month of hands-free cleaning. But don’t forget that you’ll have to buy replacement bags.

If you’re in the US, the official bags cost $19.99 for a pack of three, which means that replacement bags will cost you around $7 per month. But there are cheaper options on Amazon US, where you can get 20 compatible bags for $36.99, or just under $1.90 each.

Although its maximum 2300Pa suction is higher than many – if not most – competitors, the N8+’s features are otherwise fairly standard. It’s thanks to its self-emptying system that the N8+ costs more than robot vacuum cleaners with similar specs, if you’re in the UK, at least.

In the end, what you’re paying a premium for is the self-emptying feature – if you’re in the UK, at least. In the US, it’s more reasonably priced in comparison with competing models.

And whether or not it’s worth it depends on how you use your robot vac. If you’d like to set a schedule and forget about it for a month, without worrying about emptying the bin, it could amply repay your investment.

However, it also depends on your lifestyle. Because the N8+ isn’t the best climber and can get beached on items around the house, it will work best in an uncluttered environment – scheduled, hands-free cleaning isn’t much use if you need to rescue it repeatedly.

It’ll also take up much more space than a robot cleaner with a straightforward charging dock.