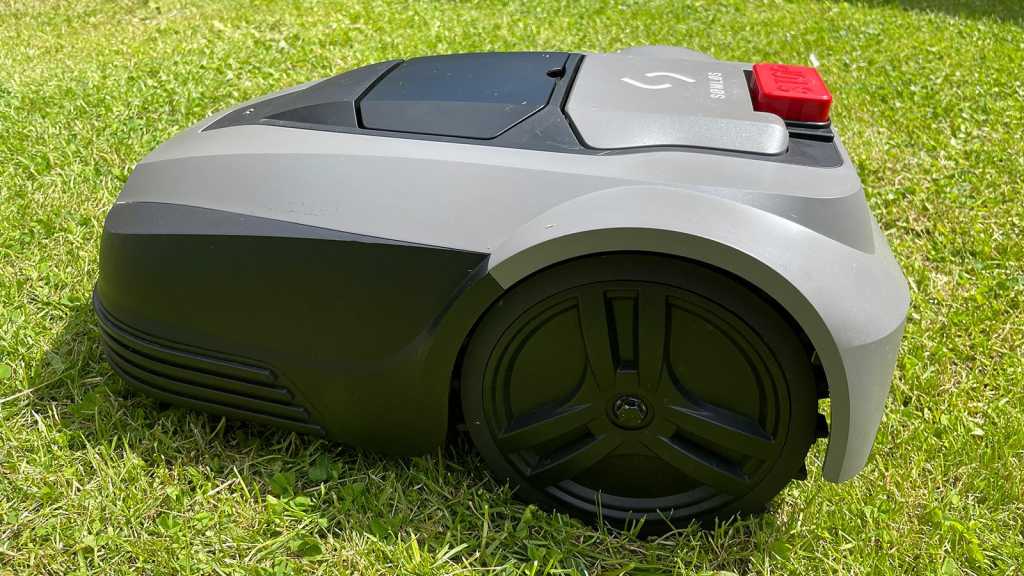 The G1 does a largely excellent job of cutting larger gardens other mowers cannot reach – but like many robot mowers it feels a couple of generations behind what we expect from smart tech.

The Sømløs G1 is a robot lawnmower aimed at those with larger gardens. While most robot lawnmowers from well-known brands can cover areas of up to 300-350m2, the Sømløs G1 can mow up to 1000m2 – or 2000m2 if you buy a model with the larger battery module (that’s a quarter or half an acre in old money).

You would have thought that this performance would have comes with a similarly large price tag – and until recently you would have been correct. However, with a new model on the way – the G1S – the Sømløs has dropped the price of the G1 to not a huge amount more than the highest-end Bosch or Flymo models.

Getting ready to mow

Robot lawnmowers make more sense for larger gardens. In many ways, they’re still a few generations behind what we’d expect from robot vacuum cleaners: requiring quite a lot of fiddly setup before you can let it do its thing on your garden and requiring your garden be set up a particular way to begin with.

Most of this is due to the way robot lawnmowers make their way around. To stop them crashing into your begonias, diving into your pond or chasing you across your patio, they require their working area to be mapped out using a boundary wire. This runs from the base station in a loop about 35cm inside the edge of your lawn – you can peg it down with provided pegs, but it’s better to bury the wire (I didn’t as while I’m committed to reviewing products in the best way possible, I’m not digging into my lawn for a review product).

The lawnmower ‘sees’ the wire using magnetic induction, so the wire needs to be connected to the base station (below) that also charges the mower. And in the case of the G1, that needs to be positioned in a very specific way – against a wall facing in an anti-clockwise direction with two metres ahead of it and some space behind. 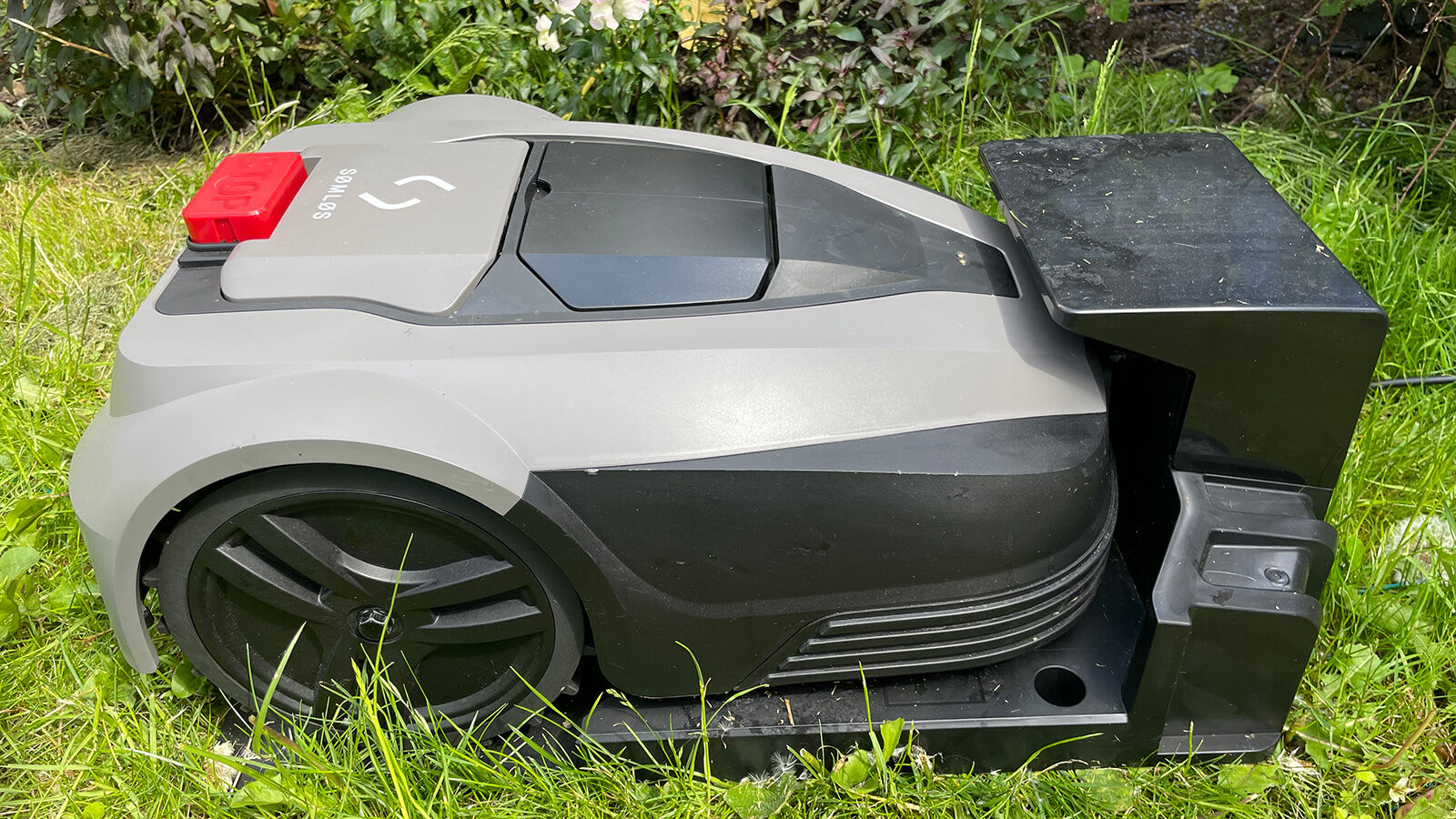 If you have multiple gardens that aren’t connected, you’ll need a base station and loop in each one (unless you rig up a way to power the loop, which seems easy and a lot cheaper than €250 for a separate base station or shelter).

It feels almost like you need to design your garden around where you’d position the G1 – if you found it frustrating to position your robot vacuum in an unobtrusive way in your house with it still able to get out, this robot mower is not for you.

The base station has a power adapter that’s when connected to the base is waterproof up to the point where it ends in a thick, circular Schuko EU two-pin plug. Sømløs says that it’s including a UK adapter for UK orders, but we’ve were unable to find an adapter that would fit inside a traditional waterproof outside power socket and let you close the lid. 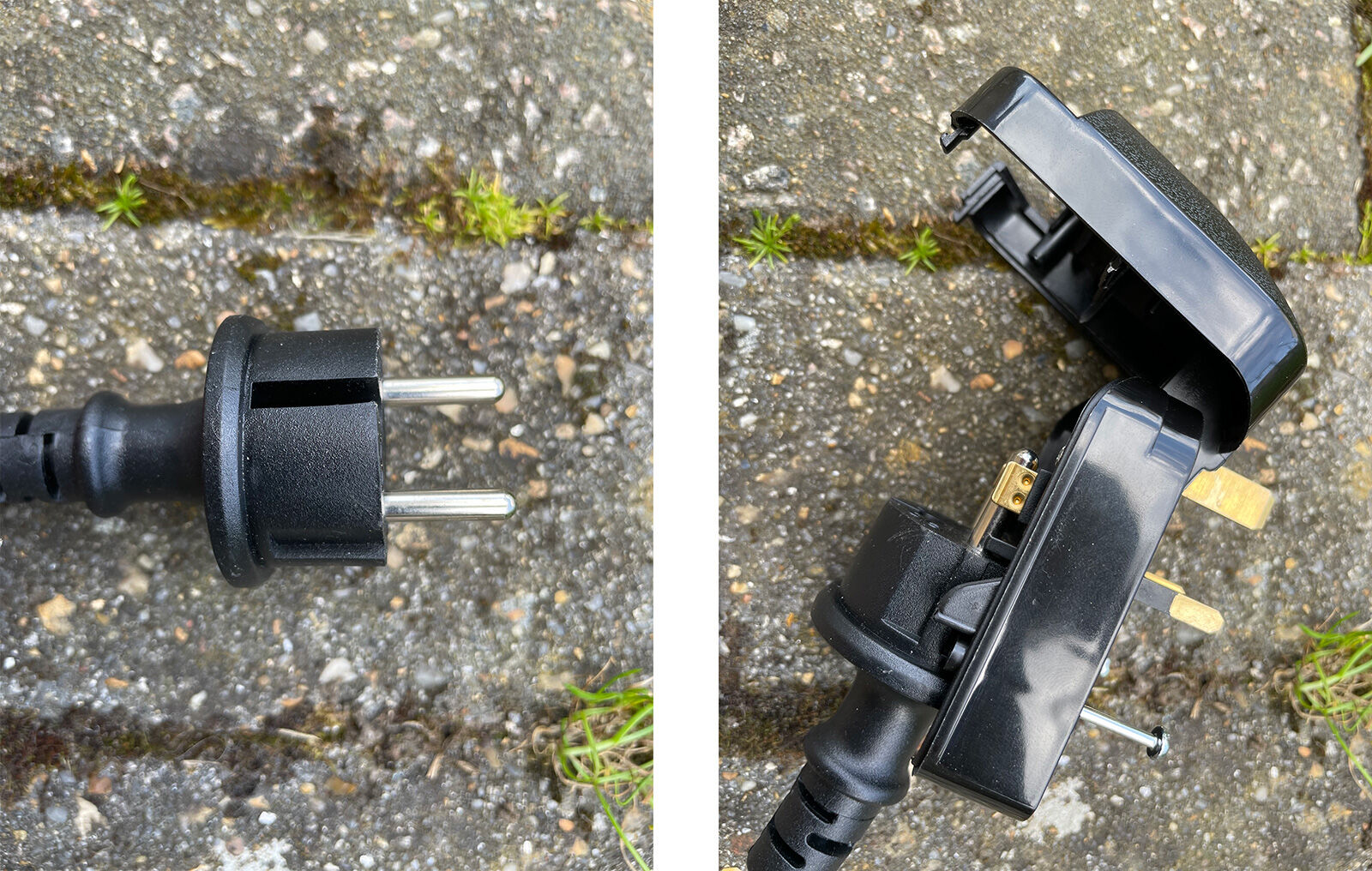 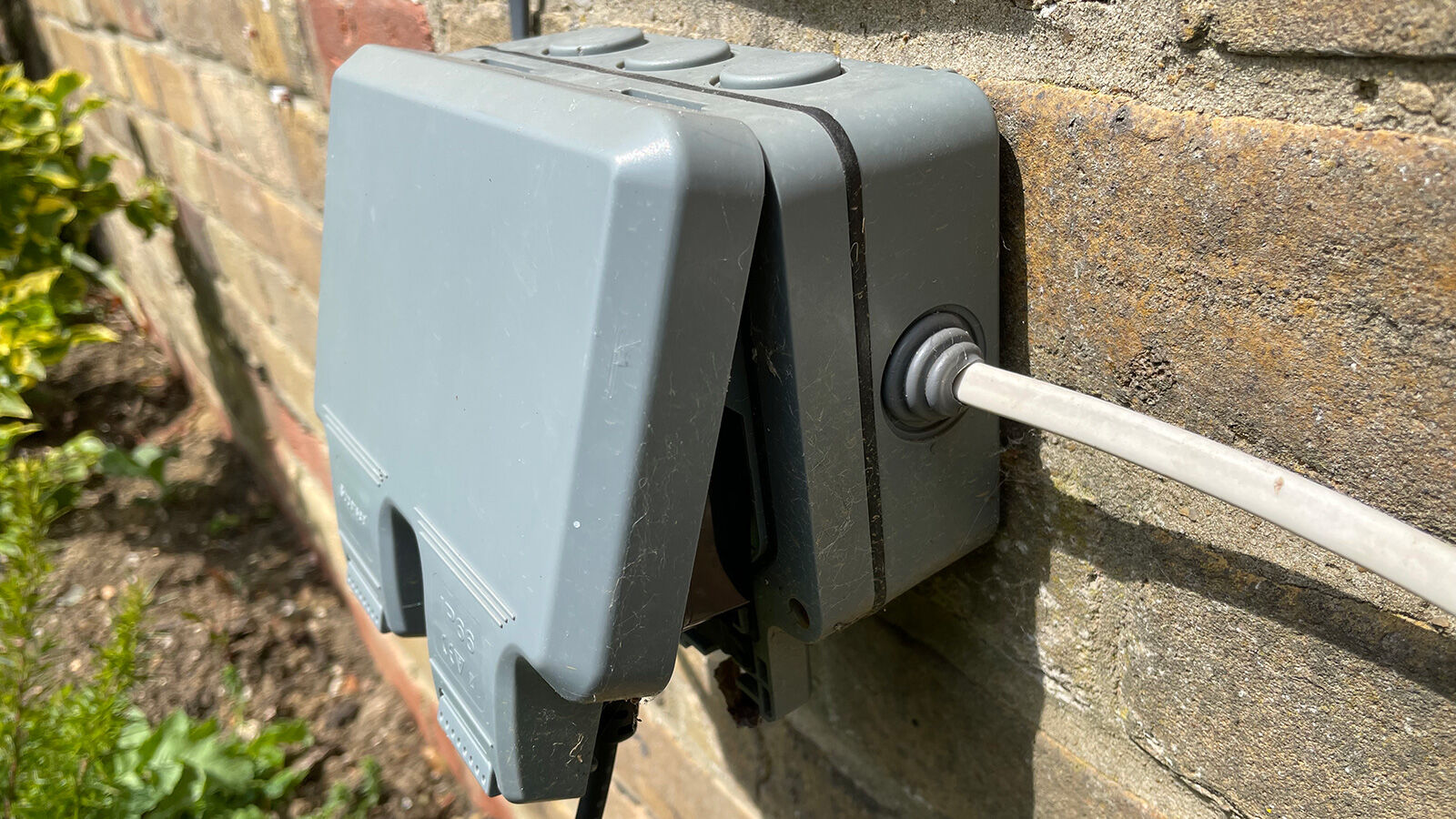 The other setup issue we encountered was that the blades that cut the grass weren’t attached to the plate that holds them. The poorly translated instructions sort-of tell you how to replace them when they blunt – but they were no help for initial installation, especially when you’re trying to work out if they really should freely rotate when screwed in to produce something that looks like a Robot Wars weapon (which a quick email exchange with Sømløs told us that they should, which is kinda cool in a ‘bring it on, Sir Killalot’ way). 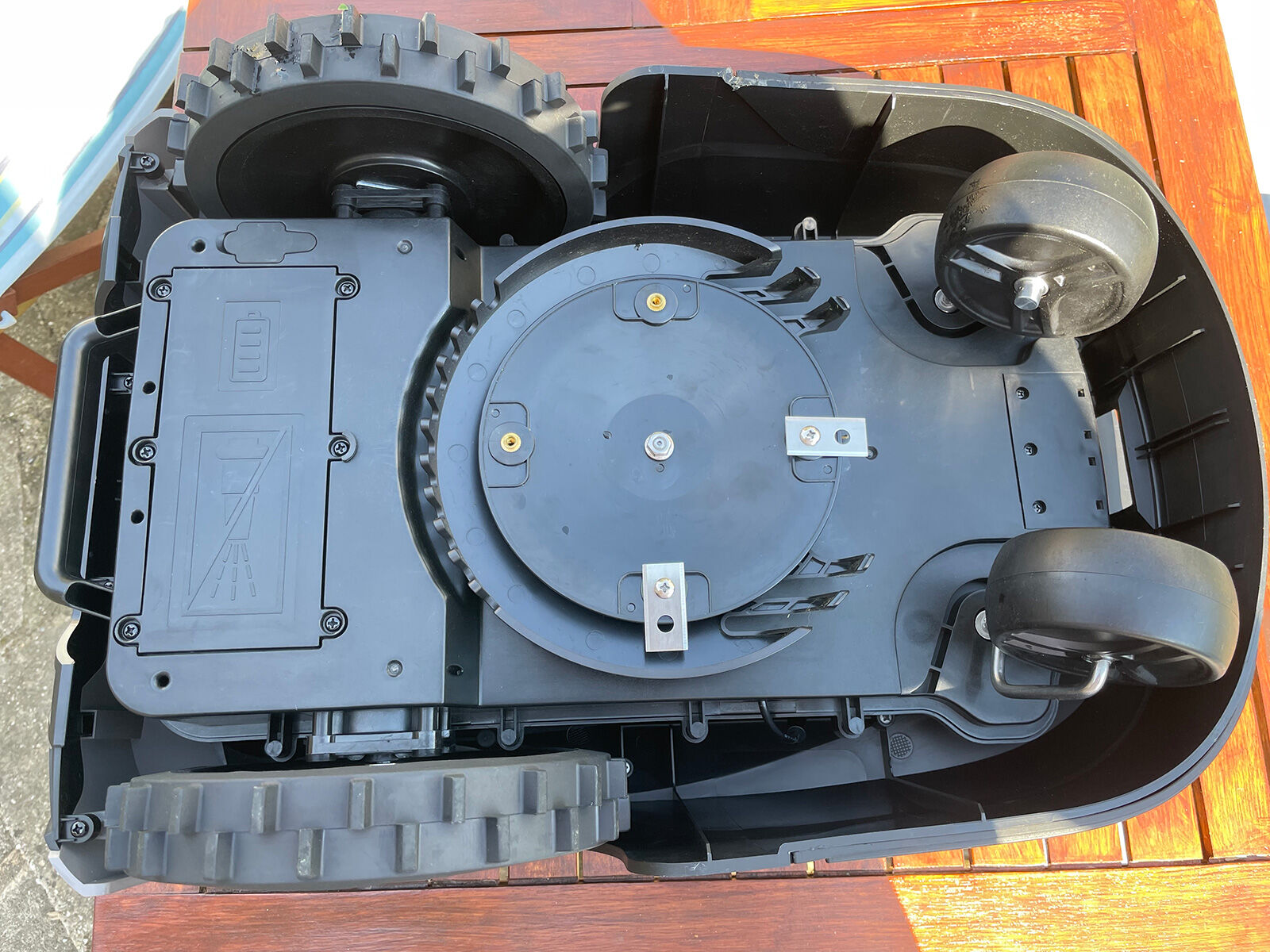 The G1 is a not-unappealing-looking mower. It’s a chunky looking unit – about the size of a small suitcase – but its gray and black curves are reminiscent of modern car design. 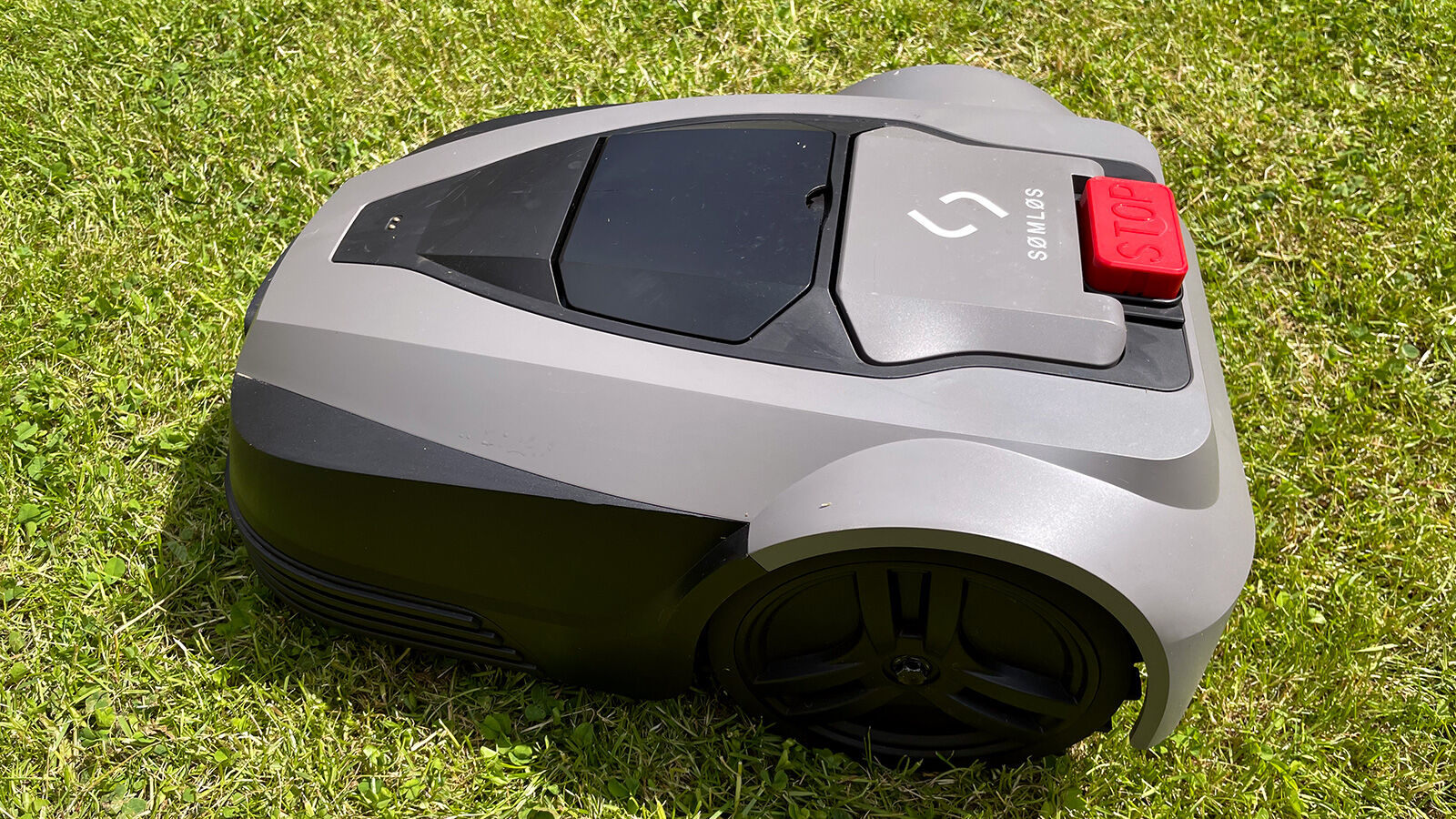 The only splash of colour is a large red ‘emergency stop oh god a fox has left something on the lawn I don’t want you slicing up and spreading around’ button.

The Stop button also opens the hatch hiding the control panel. I didn’t use this much except to initially set up the mower and connect it to the WiFi, and from then on used the Sømløs app. However, it can do everything that the app can including setting up apps – so if the base station is out of range of your home WiFi, or you want it to mow around the spot further away from your home than your WiFI extends, it’s still usuable. 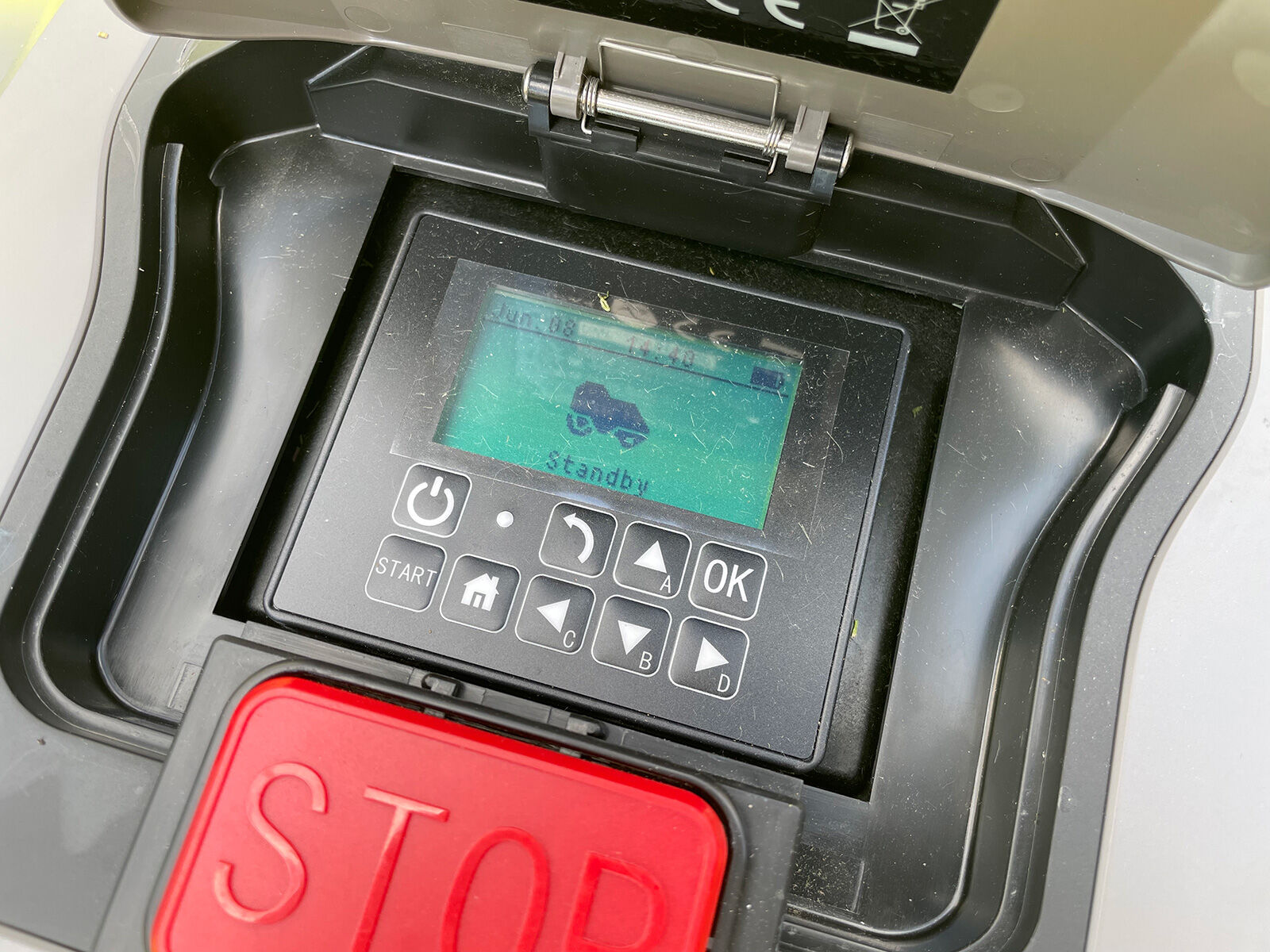 The app is available for Android and iOS. The iOS app will appear on the store if you search for ‘Somlos’ – with Google’s Play Store you have to search for Sømløs, creating the ø character by holding down the o key for a second until options appear.

The app is relatively easy to use for simple tasks – but could do with tutorial (or better manual). Setting the G1 off to mow couldn’t be easier using a big play button, and setting up a schedule to, for example, cut your lawn on Tuesdays, Thursdays and Saturdays between 10am and 12pm is quick and effortless.

How soon is mow

What seems to be missing here is what you expect from robot vacuums – the smarts that to work out when it’s been everywhere and should return to its base, rather than using a set time pattern where you have to work out for yourself through trial and error as to how long it should run for. I think we’re still a few generations away from those smarts with robot mowers.

Other features required rooting around in menus to uncover. For example, you can automate the G1 to delay mowing if rain is expected. However, setting this up is a confusing mess and dig too far and you find menu items in Chinese. 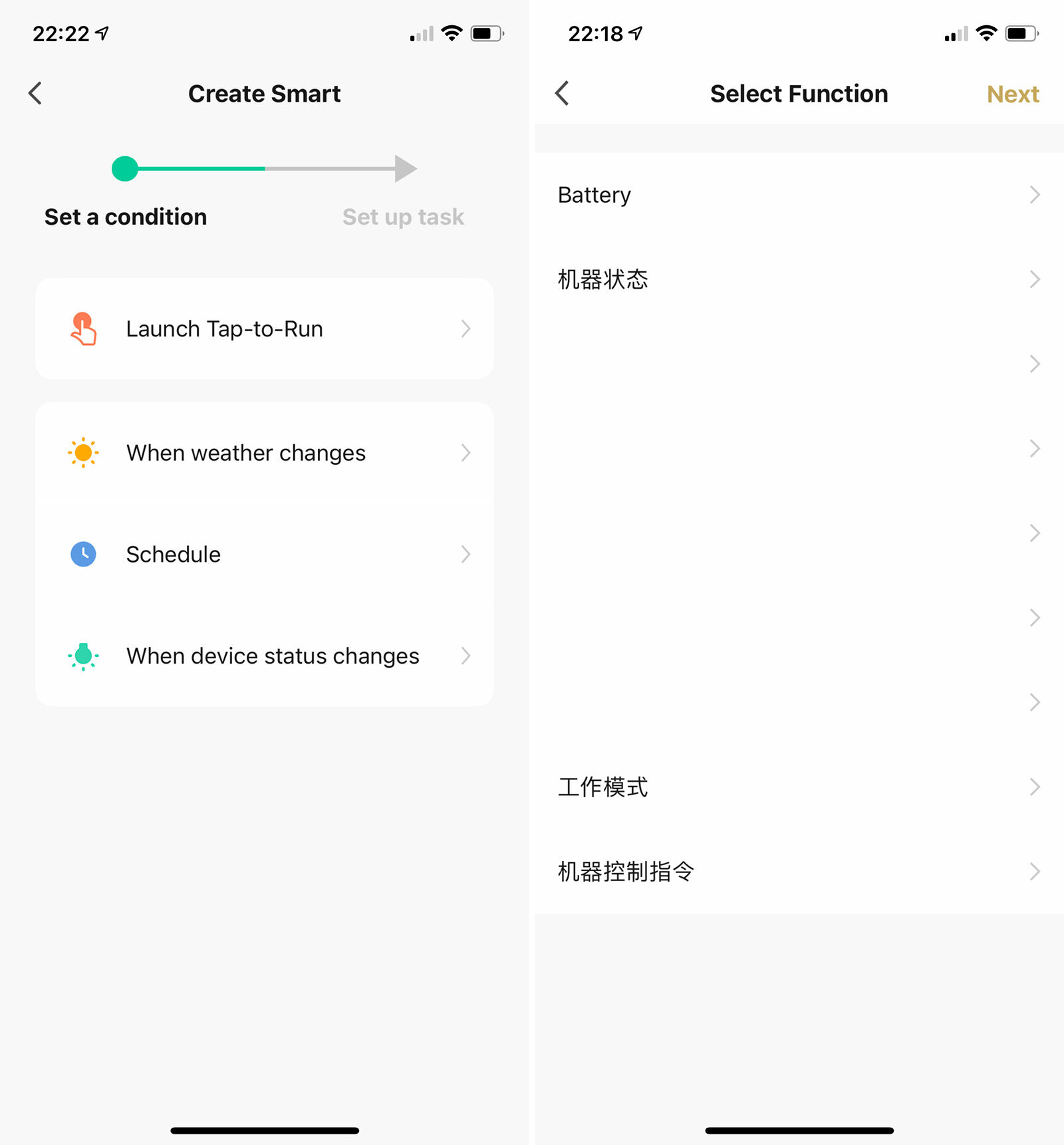 Some features are just not explained at all. There’s a rain mode – also accessible through the mower’s control panel – but no explanation of what that does in the manual.

The app – and control panel – also lack certain features mentioned on Sømløs’ website. The site promises a choice of moving patterns that were nowhere to be found. The site also mentions an Anti-Theft feature – though this merely seems to be that you get a notification if the G1 leaves the boundary area.

The app feels unfinished and we hope Sømløs improve it markedly soon.

Performance testing: can the G1 cut it?

Above the Stop button is another hatch, allowing you to set the cutting height from a first-mow-of-the-season 5.5cm to a neat 2.5cm. 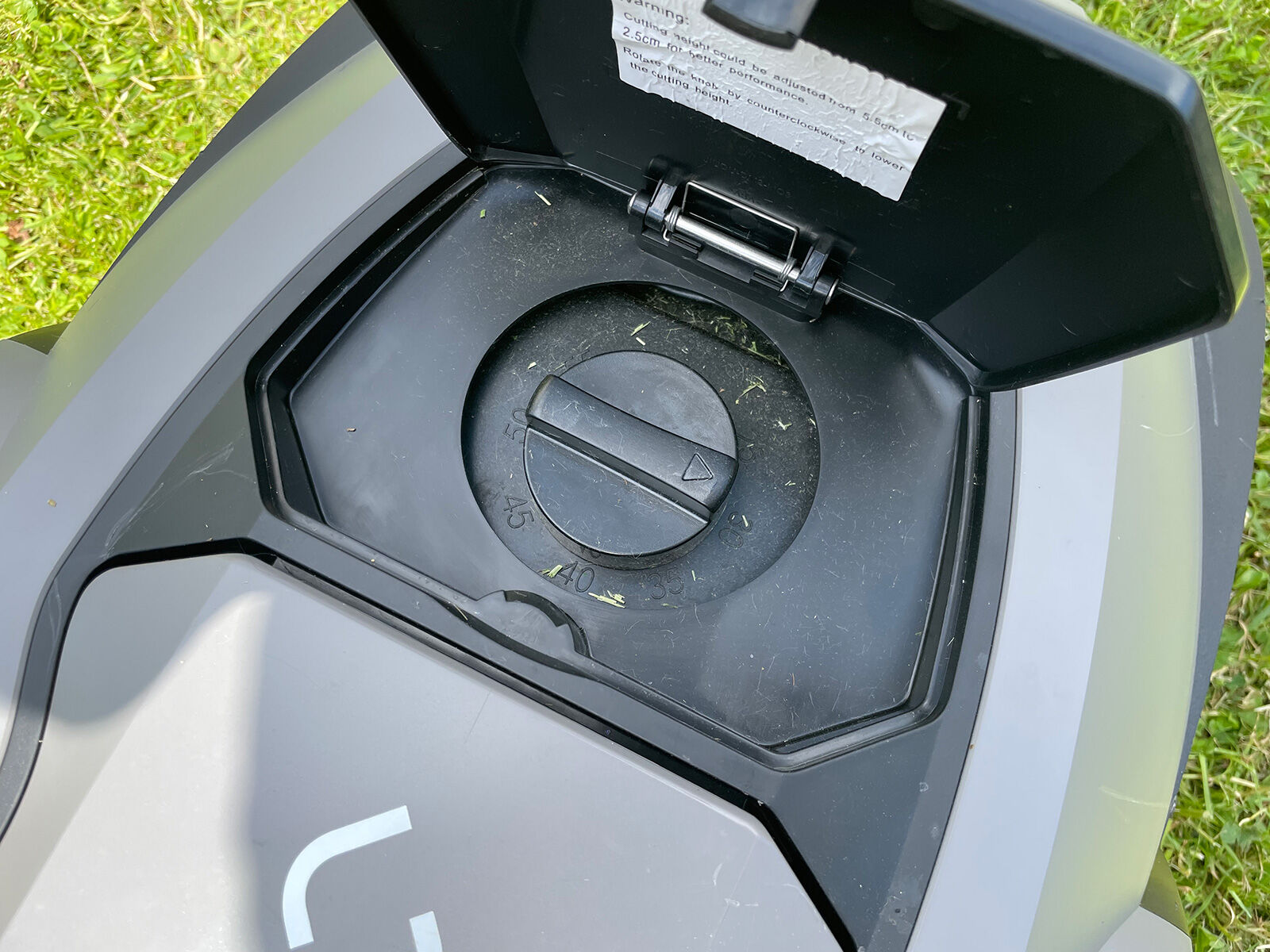 We tested the G1 initially on an overgrown, bumpy piece of grass (below) to see how it could copy with the worst we could throw at it – first at 5.5cm, then down to 4 and then 2.5 – and the G1 had no problem reducing the main area to a well cut, consistent length. 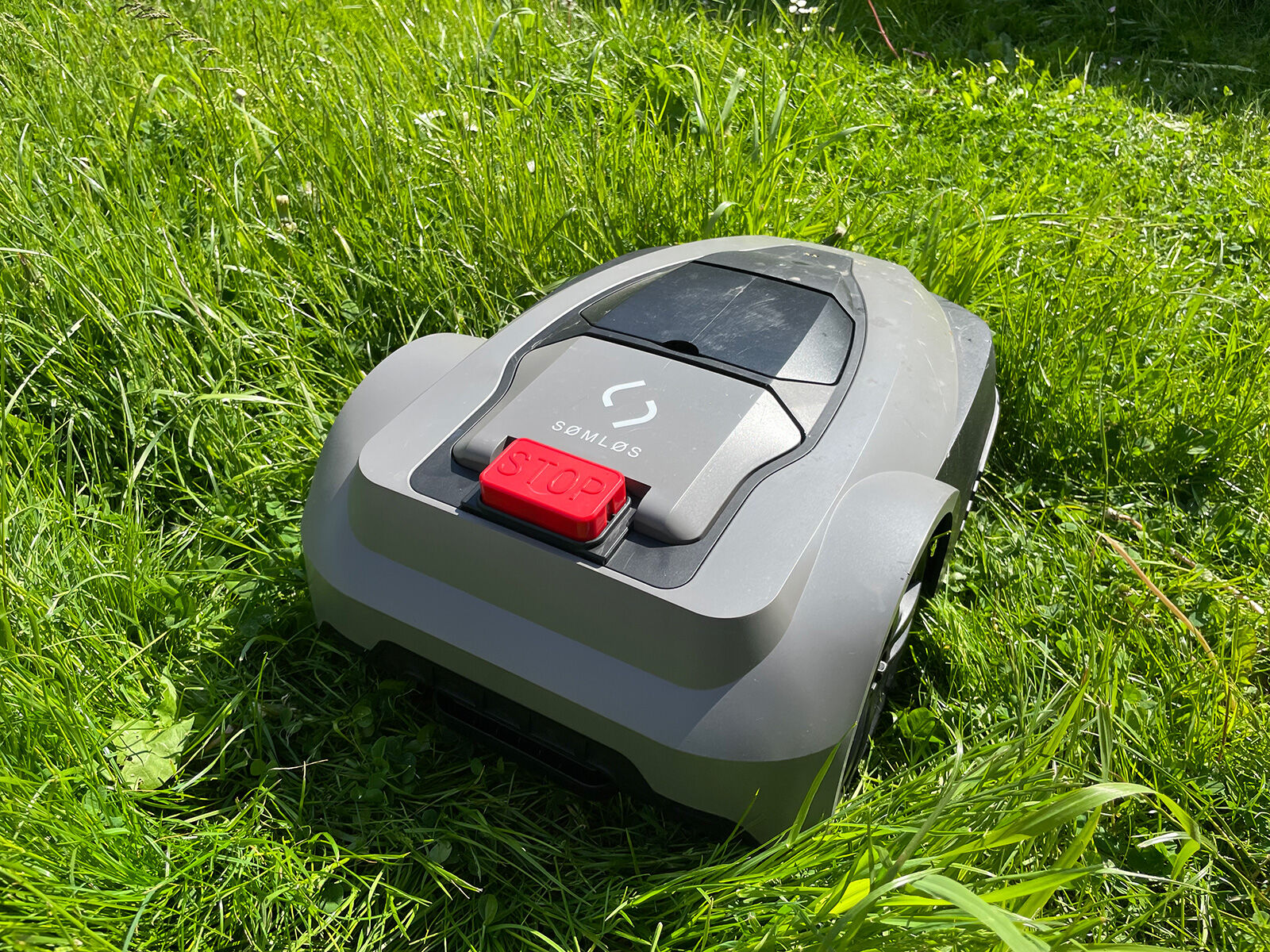 Here we found another advantage of robot lawnmowners over traditional models – not only do you not need to push them around, you don’t need to empty them either. The clippings are pushed down into your grass as a mulch to help fertilise the soil and give you a healthier lawn – and it’s a bonus for hayfever suffers like me.

The G1 doesn’t have an infrared sensor like a robot vacuum cleaner, so does bump into obstacles. However, it travels slowly enough and responds quickly that no damage was done when it encountered a bow and arrow left by my daughter on the lawn. Anything inside your garden that you want to protect – such as flowerbeds and bushes – or that the mower could get trapped on like tree roots will need to factored into how you lay your cable, perhaps even running it out from the edge to loop around the bed before running it back to the edge.

While the quality of the cut on the lawn is excellent, the edging is less so. This is less the fault of the mower than the instructions to set the boundary wire at least 35cm from the edge of your lawn. In our tests, this left around a 15-20cm border of unmown grass around the edge of your lawn – much more than you’d leave if you were mowing yourself. It’s possible to fix this by placing the wire nearer the edge, but this requires some trial and error – and is something you need to be aware of before you first setup your boundary wire, as you’ll likely cut it to length before connecting it to the base station

There are many people who would find a robot mower useful: whether for convenience, avoiding hayfever or because they don’t have the mobility to use a traditional mower every week – or they want a perfect lawn mown every other day. However, the current generation of robot mowers – including the G1 – doesn’t remove all need for lawn care. You’re still going to have to strim around the edges of your garden.

That said, if you have a large garden and would prefer to strim the edges once a week rather than mowing – or your mobility makes that a requirement – then the Sømløs G1 mow-stly does what you need. We just wish its app and features were as slick as its website.