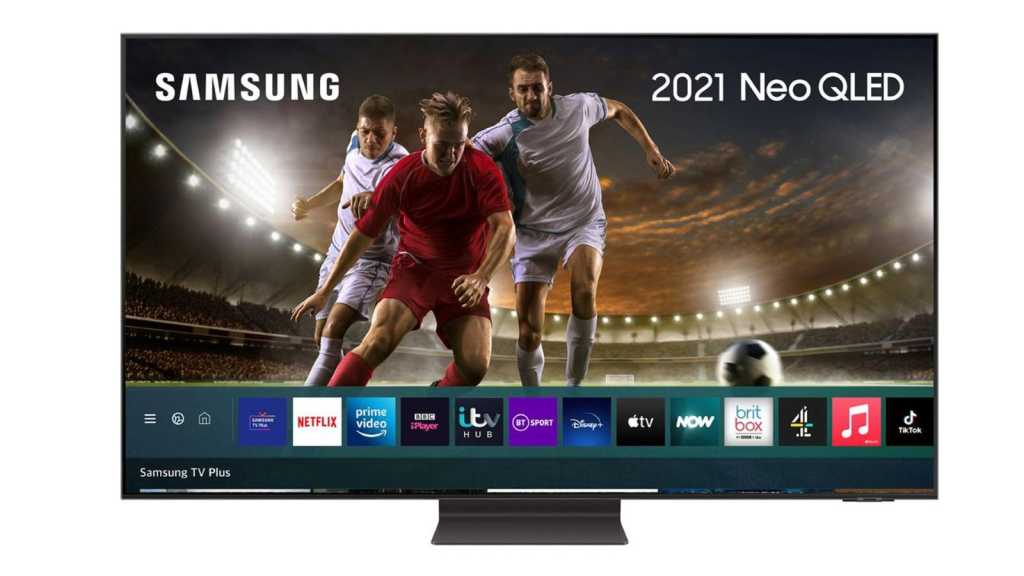 The Samsung QN95A is an amazing bright room HDR TV, offering exceptionally vivid imagery with superb gaming support. The use of Mini-LED has taken QLED to another level, but it’s not for everyone.

That’s only part of the appeal of this 4K flagship, tested at 55in here. The QN95A also boasts advanced Neo Quantum 4K processing, comprehensive game support and a multi-channel OTS+ sound system.

The QN95A is uniformly slim at 25.9mm, with a tiny bezel and grey wraparound frame. It sits on a central pedestal or can be wall-mounted if you buy a Slim Fit Wall-Mount.

The set comes with two remote controls, a standard IR zapper with dedicated buttons for Netflix and Prime Video, plus a slim SolarCell One Remote alternative that has a solar panel (which charges using indoor lighting), and USB-C port, to save on batteries.

The most significant design affectation is the new-look One Connect Box. This outboard control hub provides AV and power to the screen, via a single fibre optic cable. It’s a sizeable unit, much bigger than a TV set-top box (it dwarfs my Sky Q).

Additional connections include an optical digital audio output, a trio of USB connectors and Ethernet. Wireless support covers Bluetooth 4.2 and Wi-Fi, with Apple Airplay 2 compatibility. A CI slot is available for those that need it.

The smart platform of choice is Samsung’s Tizen OS, accessed via a launcher bar that runs across the bottom of the screen. It’s a slick, well-honed interface that’s easy to live with.

Streaming services include Apple TV+, YouTube, Disney+ and a comprehensive collection of catch-up TV players. There’s also the Game Bar, a new dedicated interface offering specific gaming control. From here you can select a custom aspect ratio (21:9 or 32:9), adjust input lag and so on.

Long story short: Mini-LED bulbs allow for a uniformly bright screen, with far better handling of HDR than we’ve seen before. It solves, in one fell swoop, most of LCD’s traditional backlight problems and without the OLED issue of screen burn.

These diminutive LEDs have allowed Samsung to reimagine the entire backlight module, resulting in a much slimmer panel. Behind the glass there are reportedly 792 zones, nearly twice the number of dimmable zones seen on this set’s FALD (full-array local dimming) predecessor.

Also new is a Quantum 4K processor with multi-intelligence deep learning, said to multiply the ability of this set to optimise video processing and upscaling by a factor of 16. There’s clearly a lot of number crunching at play here, which probably explains why up-scaling looks so good.

The QN95A supports regular HDR10, HLG and HDR10+ Adaptive, a refinement of the HDR10+ dynamic metadata standard that uses the set’s light sensor to better manage HDR, much like Dolby Vision IQ.

Unfortunately, Samsung once again has snubbed Dolby Vision, which is a disappointment given it, and not HDR10+, is the de facto dynamic HDR standard.

Panel brightness is wondrously high. I measured peak brightness on the Standard image preset with local dimming on its default Standard setting, using a 10 per cent window, at 1300 nits. It’ll peak even higher if you set Local Dimming on High, and/or opt for the Dynamic picture mode.

Most content is increasingly mastered for 1000 nit peak brightness HDR, which means the QN95A can present it comfortably without recourse to aggressive tone mapping or hard clipping.

Samsung offers its usual selection of image presets, but Intelligent Mode supersedes them all. We suspect the latter will be the way most users will choose to watch the QN95A.

It’s in this Intelligent Mode that the set is at its brilliant best. This is unquestionably the best bright room LED TV we’ve ever seen. Even in a room flooded with sunlight, or bathed in high ambient lighting, the picture cuts through with belligerent levels of contrast, colour and clarity.

Of course, what this is not is cinematic. Even in dark room conditions, the image positively glares. You can, of course, disengage Intelligent Mode, and the set begins to behave more like a regular QLED. There’s Filmmaker Mode, but devoid of beneficial image processing, it’s not a great viewing experience. Standard is easier on the eye, while Natural has a surprisingly high average SDR picture level.

The set features Samsung’s own Object Tracking Sound Plus (OTS+) system, which uses eight speakers, including two up high on the rear. It sounds pretty impressive, although for all the steerage the audio is still very much centred around the panel.

If you own a compatible 2021 Samsung soundbar, you can also use the screen in tandem, unlocking Q Symphony sound, for greater immersion. There’s Dolby Atmos pass-through, if you want to route Dolby Atmos from a streaming app to a soundbar or system.

You can also buy it from Currys PC World and John Lewis with pricing matching Samsung’s discounts.

This pricing makes it comparable with LG’s range-topping G1 series, which is worth considering if you think OLED is a better choice. View more options in our chart of the best TVs.

Curiously, the QN95A isn’t available in the US market. Stateside, the Neo QLED 4K range tops out with the QN90A, which forgoes this model’s One Connect box and starts at 50in for US$1,499. Or you might be more tempted by the QN85A which begins at US$1,599.

Samsung’s Neo QLED debutant is remarkable. The adoption of Mini-LED brings not just startling brightness, but a uniformity of contrast and colour which borders on ravishing.

It’s the best 4K HDR TV I’ve seen for everyday bright room viewing. It’s also a superb gaming display, with a host of novel control. Is it as cinematic as an OLED when it comes to movies though? That’s a debate worth having.

The One Connect Box remains a divisive provision and really only appeals if you’re wall-mounting the set (with the bracket an optional extra) and need to simplify cabling.

Overall, this Neo QLED flagship is hugely impressive, one that literally makes the competition look dull in comparison. If you’re not set on an OLED TV, this is the flagship to buy.