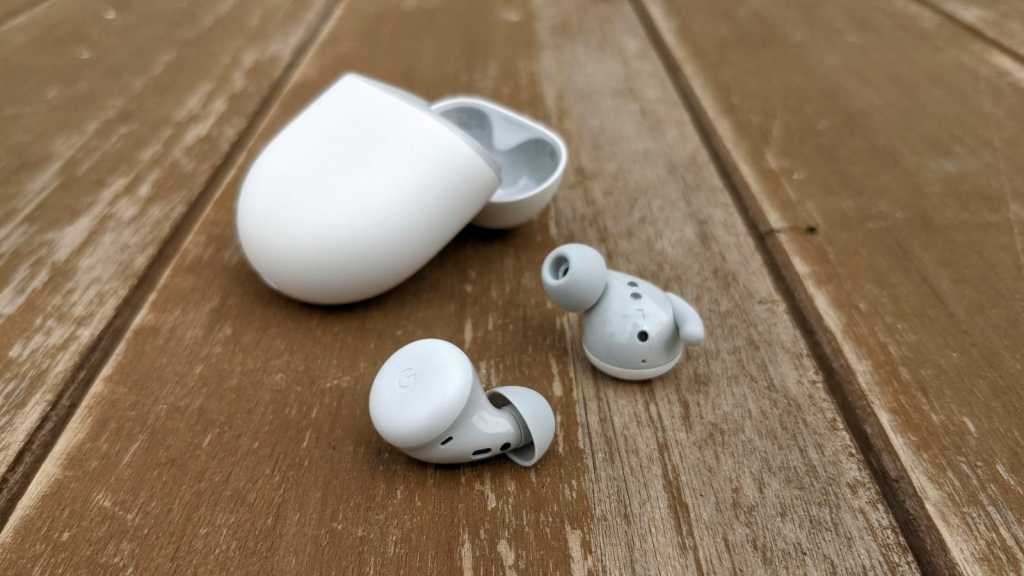 If you can live without things like wireless charging and noise cancelling – and want to prioritise smart features – then the Pixel Buds A-Series are the ones to buy.

Although they didn’t arrive at Google I/O as some people expected, the Pixel Buds A-Series are now official and are the firm’s cheapest wireless earbuds yet.

The general idea here is to offer a cheaper version of the existing Pixel Buds 2, while retaining the key features and quality. There are some downgrades to achieve the significantly lower price but they are fewer than you might expect – namely wireless charging and Attention Alerts.

Overall, Google has done a good job and even made small improvements here and there. The main selling point for the Pixel Buds A is all the smart features, as below-average battery life and no noise cancelling might lead you to look elsewhere.

As you might have spotted already, the Pixel Buds A look identical to the Pixel Buds (2020). Indeed, Google hasn’t changed the design at all so these are a budget version of those same headphones.

The only new element is two new colour choices: the Dark Olive – which I was hoping for – and the Clearly White option, which I was sent for testing. It has the same name as the Buds 2 but now has light grey sections on the earbuds and inside the case, rather than black.

If you’ve used the Pixel Buds 2 then you can probably just skip to later sections of the review but otherwise, these are well-designed and well-made earbuds.

They come in a small case that has a smooth matte finish. It looks and feels nice, although it’s oddly plain with not even a ‘G’ logo in sight. All you get is a USB-C port on the bottom for charging and a hidden LED just below the lid which lights up when you open it.

The earbuds themselves are very small and one of the lightest pairs around at just 5g each. They slotted into my ears just fine and stayed in place well. You can change the ear tips and while there’s a fin section to aid stability, this is a permanent fixture.

It’s a shame as, although I use small tips, I found the fins didn’t do much as they were unable to reach my larger ears. Nevertheless, I still found them comfortable for long periods and unlike some, didn’t worry too much about them falling out.

On the outer parts is a ‘G’ logo and this is where you’ll find the touch controls. It’s also where we find the first downgrade compared to the Buds 2 as there are no swipe gestures here for volume, just tap (single, double and triple) but it works well, with good responsiveness.

It’s a shame you can’t customise the touch controls so, for example, the left earbud could handle volume while the right does playback.

The last thing to mention on design is the IPX4 water resistance, which is basic but better than nothing and should protect the Buds A from splashes or sweat.

Inside the Pixel Buds A are the same custom 12mm dynamic drivers as the Buds 2 and they use Bluetooth 5.0 for connectivity. Although there are more recent versions like 5.2, I didn’t have any of the drop-out issues we found with the Buds 2.

At 12mm, the drivers are surprisingly large considering their diddy size and the Buds A do offer decent sound quality with clean and accurate audio across the mid and high-end of the frequency range.

As Lewis found with the Buds 2, the bass is lacking by default, but you can toggle a Bass Boost option in the setting which sorts out this issue if you listen to a lot of bass-heavy music.

Alas, they don’t have active noise cancelling (ANC) but then nor do much more expensive pairs like the Apple AirPods 2 or similarly priced options such as the Cambridge Audio Melomania 1 and RHA TrueConnect 2.

Passive noise isolation is very good, but if ANC is a must and you can’t justify flagship prices, then look to the Huawei FreeBuds 4i or Anker Soundcore Life A2 NC.

Really though, the USP of the Pixel Buds A is the range of smart features that Google offers. Most of these you won’t find on rivals at this or higher price points.

Much of the appeal comes from the earbuds supporting the Google Assistant, so it’s like having tiny smart speakers in your ears. Before I come to what you can do, clever technology is apparent as soon as you open the case.

Fast Pair means you get a pop-up notification and after a few simple on-screen steps, the Buds A will be connected to your phone. I was expecting this on my Pixel 4a 5G, but Google says it will work with any Android phone running version 6.0 or later.

Note that you can also use them with iOS or other Bluetooth devices if you like, you’ll just need the pairing button on the back of the case.

On my Pixel phone, the Pixel Buds app is there at a system level so you can get battery life figures for each earbud from the drop-down bar and quickly get into all the settings by tapping – or the cogwheel in the Bluetooth devices menu.

As mentioned earlier, the Buds A’s touch controls don’t support volume swipes, but you can ask the Google Assistant to turn them up or down. It’s a neat touch, although I can’t imagine myself using it in public even if you can touch and hold the earbud instead of saying “Hey, Google”.

It’s just one of the many things the Google Assistant can do on the headphones, so it doesn’t stop there, not by a long shot.

One of the main features is translation, which could come in extremely handy when travelling abroad or simply speaking to neighbours that don’t speak English. It can translate 40 different languages in real-time with some help from the Google Translate app.

Without someone fluent in another language to test this with, Google suggested watching a video on YouTube in another language. It translated my speech effortlessly but, as you can see above, somewhat struggled to keep up with the fast-paced Spanish. I imagine speaking to someone in real life when they know they are talking to an app will provide better results.

You can also get your notifications read out to you if you like (after selecting which apps you want this feature switched on for) and it can be really handy – eg you’re out shopping and your partner messages something to add to the list – but you also get unhelpful things like “Jordan has sent three photos”.

Adaptive Sound isn’t linked to the Assistant but aims to adjust the volume automatically based on where you go while wearing the Buds A. I didn’t find it did much but then I didn’t take the Buds anywhere particularly challenging while testing.

I found the in-ear detection more useful and reliable than many others with the same feature. It knows when you take the earbuds out or put them back in thanks to IR sensors, and quickly pauses or resumes your music.

There’s more as you can also use your phone to find the Pixel Buds A if you lose them. And the good news is that if you don’t like one of pretty much all of these features, you can likely switch it off in the settings so it doesn’t bother you any longer.

As we found with the Pixel Buds 2, battery life remains a downside, with the Buds A able to last for five hours of playback for the earbuds alone. I found this to ring true, whereas my colleague Lewis found the Buds 2 going for around three hours. But it’s a long way off many rivals, with some able to last double that time – or even more.

Add in the charging case and you can get 24-hours of total time which isn’t bad, but that five-hour figure won’t be long enough for some users, especially if you want them to last a full long-haul flight or similar.

Fast charging does help the situation somewhat as you can get three hours playback from a 15-minute charge.

The case itself charges over USB-C and does not have wireless charging like the Buds 2.

They went on sale in the US back in June and are now on pre-order in the UK with the checkout page stating a delivery date of 25 August.

There are, of course, many cheaper pairs of wireless earbuds available but rarely from the big tech brands. The main rivals here that are a little cheaper and have active noise cancelling are the Huawei FreeBuds 4i and Anker Soundcore Life A2 NC – both £79.

Google is finally getting there with its own-brand wireless earbuds and I think it was a wise decision to take the flagship model and cut out some of the more premium features to achieve a much more attractive price point.

After all, it has worked well with the Pixel ‘a’ phones.

Considering the price difference to the Pixel Buds 2, it’s perhaps a bit surprising how little Google has downgraded here – namely wireless charging on the case and Attention Alerts.

Everything else remains and although there are cheaper rivals with active noise cancelling, the Pixel Buds A offer something different, and that is lots of smart features.

Basics like in-ear detection and decent touch controls are just the start, as the Buds A also have Adaptive Sound, Fast Pair and support for the Google Assistant, which opens up a world of possibilities from getting basic answers or notifications to real-time translation.

Battery life isn’t great for the earbuds themselves but the case has plenty of additional juice and fast charging to quickly top the buds up when they do get low.

If the cons are not on your ‘must have’ list, then the Pixel Buds A come recommended.