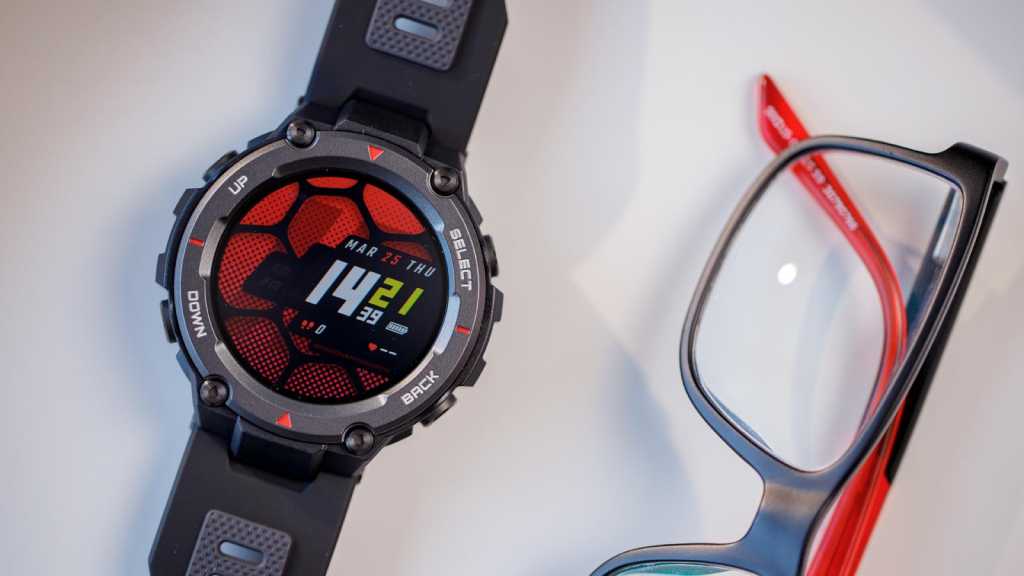 An improved hardy design and upgraded sensors render this a welcome improvement over the original Amazfit T-Rex, however, the software experience lacks depth and flexibility.

Zepp Health (formerly Huami) introduced its first rugged smartwatch – the Amazfit T-Rex – back at CES 2020; one year on and a successor – in the T-Rex Pro – emerges; offering subtle improvements on the same familiar ‘tough watch’ recipe.

At a glance, you might have a hard time telling the Pro apart from its predecessor but its creators have focused on delivering a timely (no pun intended) follow-up that offers more of what’s expected from the current wearable market, whilst also doubling down on traits that help the T-Rex line stand out from the crowd.

If you’ve seen the original T-Rex, you’ve seen the T-Rex Pro; reminiscent of Casio’s G-Shock watches, it’s full of angles and ridges. Being made of polycarbonate, the Pro may feel a little toy-like, compared to some rivals out there, but if you’re a fan of this general ‘tough tech’ aesthetic, the T-Rex Pro fits the bill. 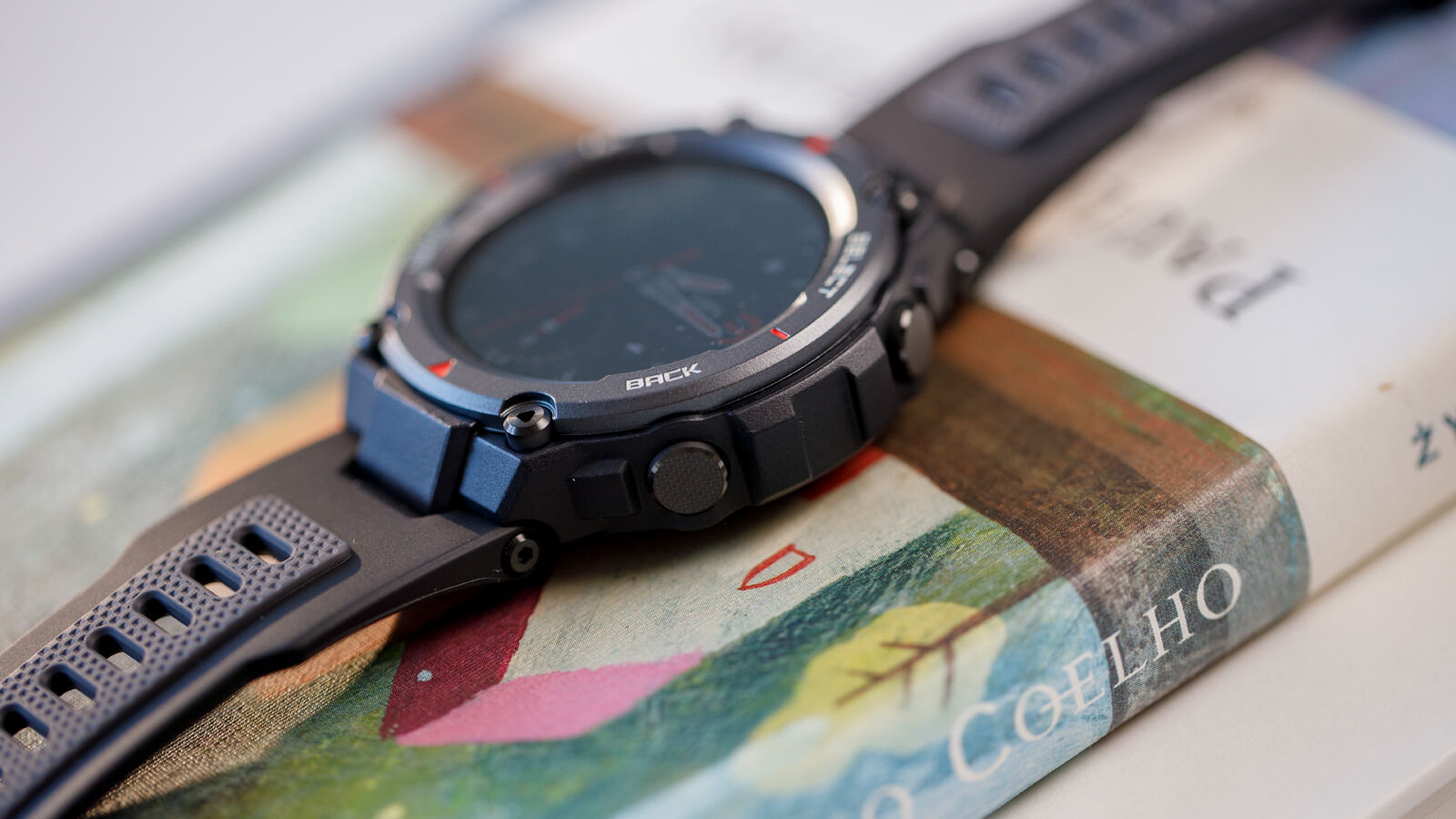 Despite its intentionally bulky appearance, it’s actually a surprisingly lightweight timepiece (clocking in at 59.4 grams, including the strap) – whether that’s a pro or a con may be more a matter of personal preference than a functional advantage/disadvantage.

This robust-looking design isn’t just for show, though; the T-Rex Pro has undergone the same MIL-STD-810G testing as its predecessor and actually surpasses it, with a total of 15 certifications (up from 12); covering everything from temperature and humidity extremes, to shock and water resistance.

In fact, one of the big upgrades is 10ATM swim proofing – double that of the original T-Rex (and the majority of the market’s best smartwatches, for that matter), meaning it approaches diving watch territory and could likely withstand being worn in the sea (although actually diving down to 100m still isn’t recommended).

Four textured metal buttons (two on each side of the casing) stick out just enough that they’re easy to feel out without having to look but don’t protrude so much that they’ll catch on anything during general wear. As such, operation while sporting gloves is relatively easy, compared to smartwatches that more heavily rely on touch interaction. 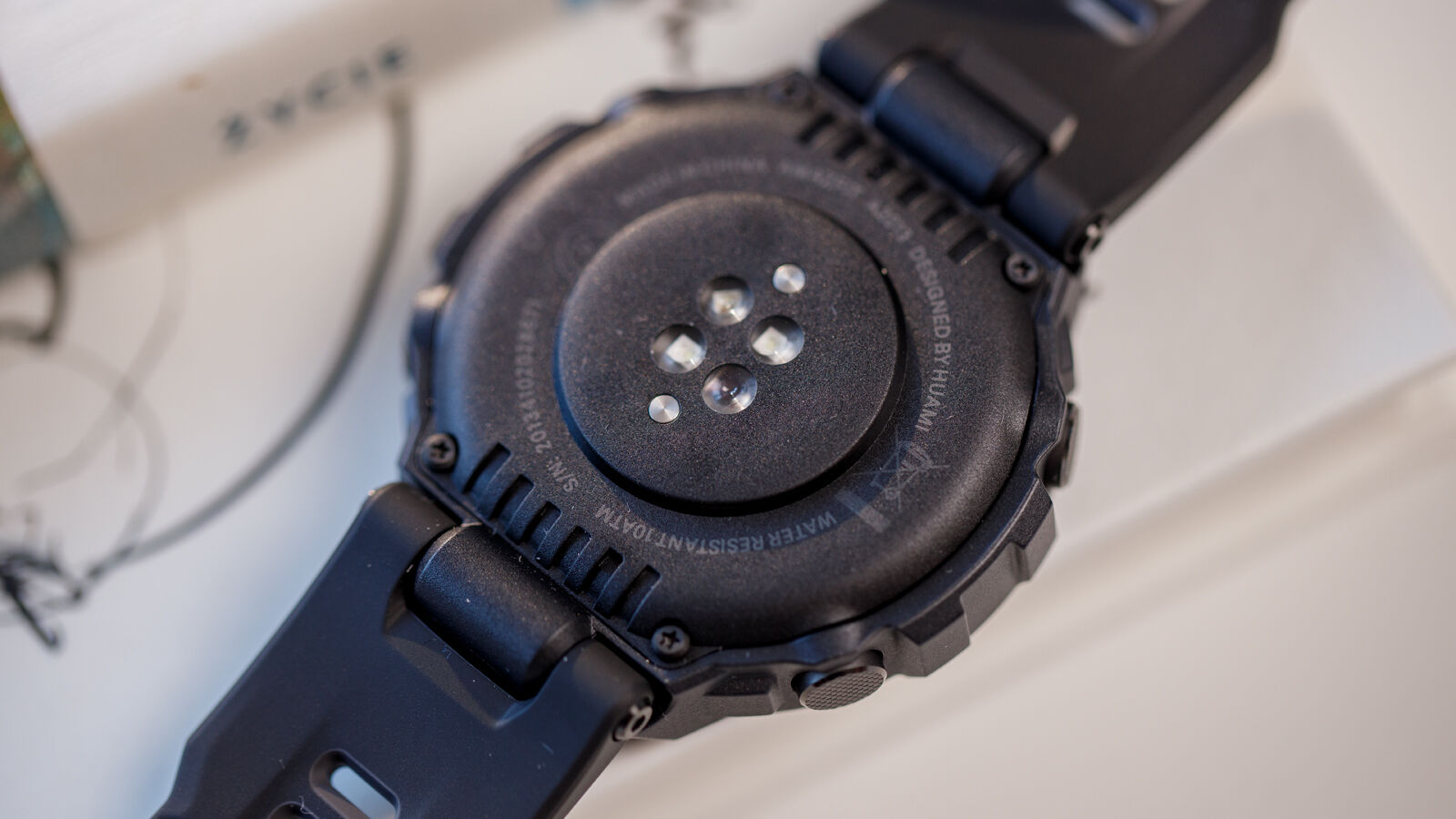 The original T-Rex came supplied with a disconcertingly stretchy and flexible non-removable silicone strap and while the Pro’s 22mm band still comes fused to the watch’s body by design, the blend of the material used feels far more rigid and harder-wearing, not to mention it sports a two-tone effect that sets itself apart this time around.

There’s still enough flex that your wrist feels like it can move freely during use, while the tang-buckled strap – with its single tongued loop – ensures the T-Rex Pro remains firmly and comfortably out of the way but also securely in place.

The Pro comes in three colourways (two fewer than its predecessor): Meteorite Black (pictured) – which features a ‘metal sprayed gunmetal bezel, Desert Grey (a warm grey that verges on beige) and Steel Blue – which manifests as a dark teal.

As well as a familiar design, the Pro model also relies on what looks like the same 1.3in circular AMOLED screen as the original T-Rex. As such, it’s pleasingly colourful, with good contrast and impressive sharpness, as before – facilitated by a resolution of 360 x 360 pixels.

Brightness is also sufficient – even in direct sunlight – so it’s easy to glance at comfortably in all conditions. There’s also auto-brightness adjustment and a manual slider, that’s accessible from the watch’s quick settings – a swipe down from your chosen watch face. 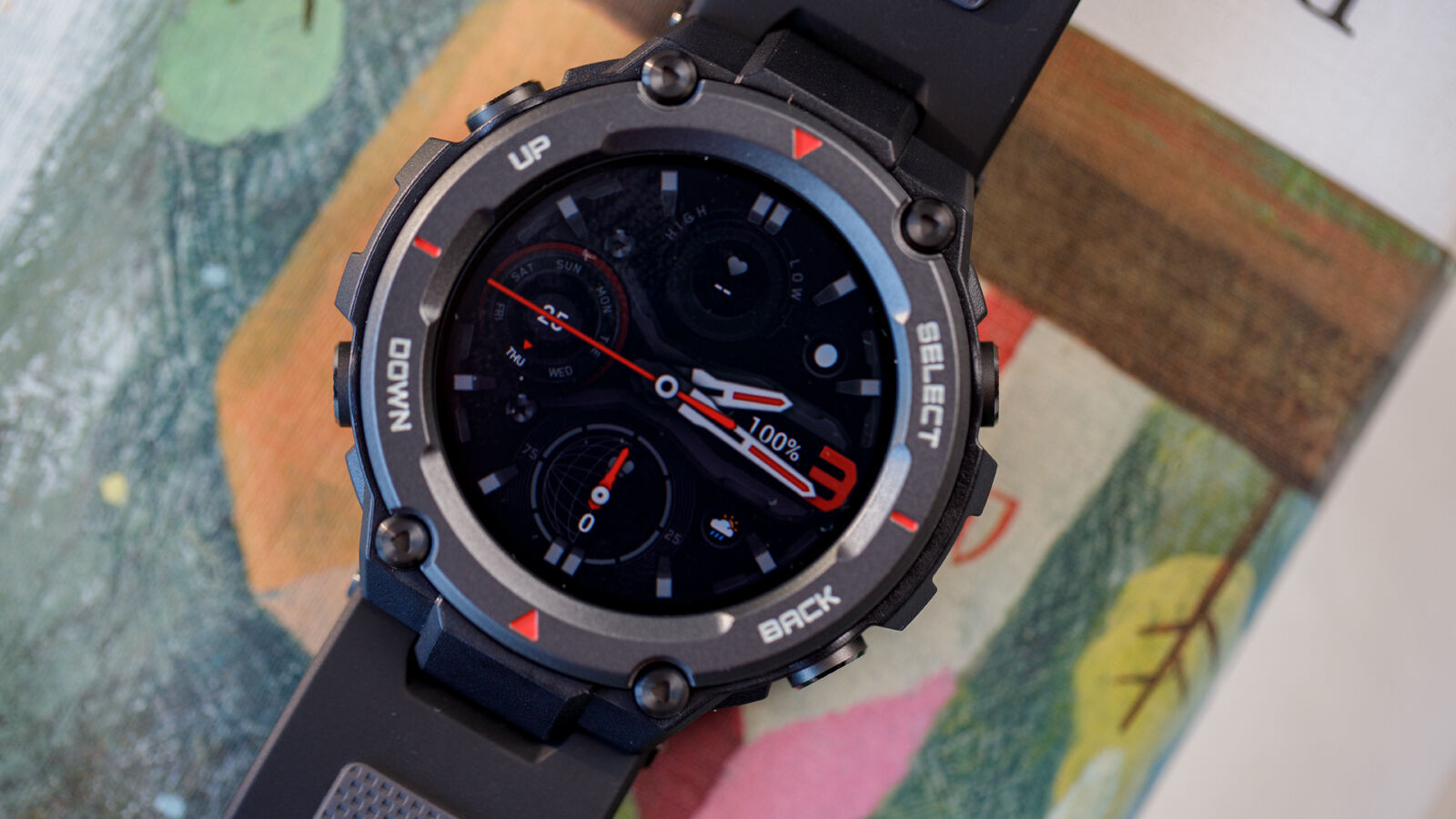 One subtle change is the shift from Gorilla Glass 3 on the original T-Rex to tempered glass on the Pro. On the surface, this seems like a downgrade, however, without knowing more about the makeup of the new glass the Amazfit team has opted for here, it’s hard to say for sure.

During the extended testing of the watch, the Pro’s cover glass has proven impressively resilient, standing up to knocks and scrapes across multiple weeks without any noticeable lasting damage, which suggests it’s on a par with its predecessor’s protective measures (or may even surpass them), at least with regards to scratch resistance.

One pleasing aesthetic change comes with the optional always-on display; previously limited to either a single analogue or a digital watch face, users now have the option to use a design that compliments their chosen default watch face; meaning the variety of always-on faces is only really limited by the total number of standard faces the Pro supports. 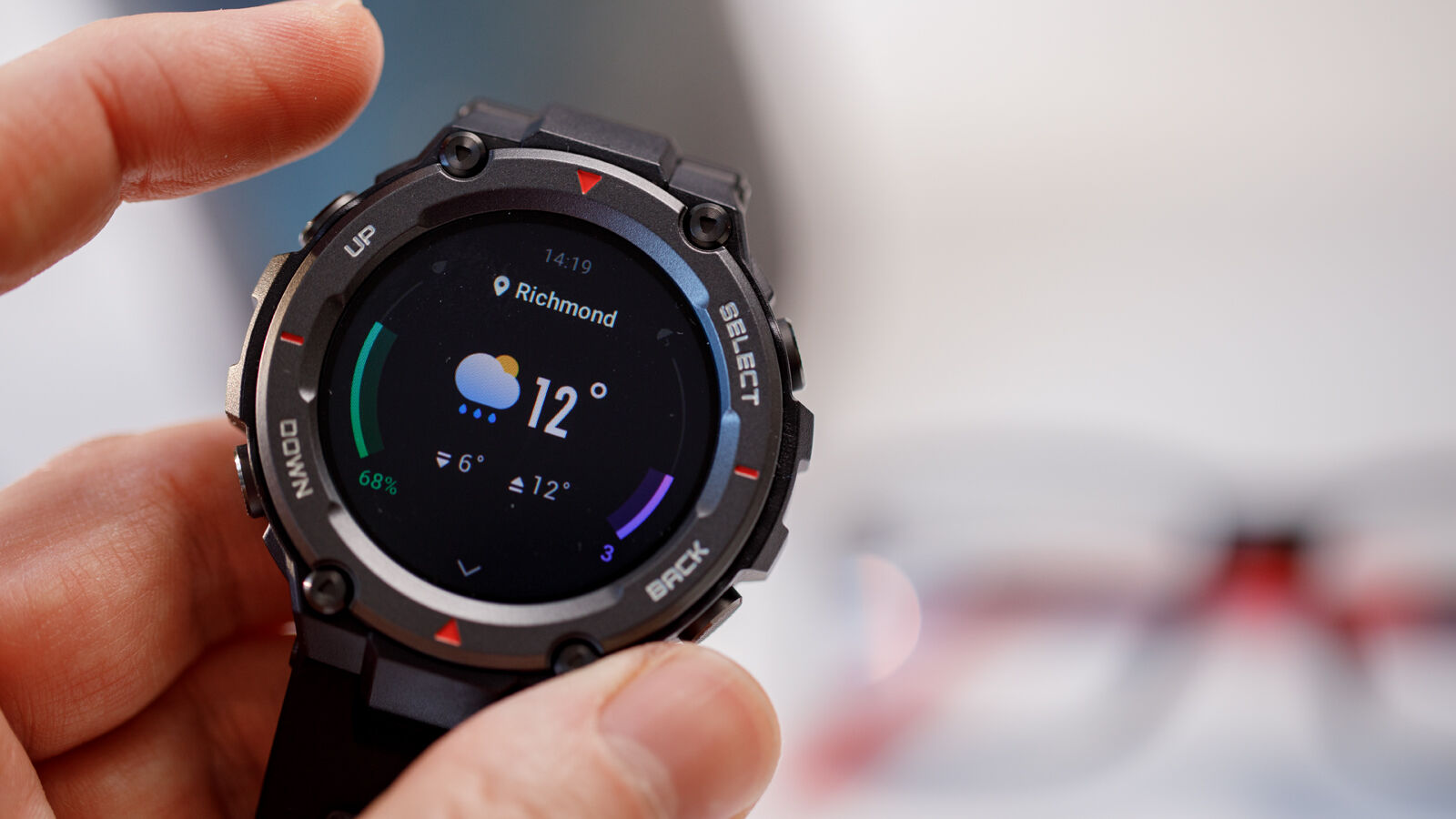 It’s a good thing too, as even when set to ‘sensitive’ the response speed when lifting your wrist to check the time feels painfully slow.

The watch comes with five pre-loaded faces out the box – some of which support customisable complications tied to first-party metrics logged by the Pro – while the companion Zepp app (for Android and iOS) expands the total number of choices (at the time of writing) to 35, with recommended faces decided upon relative to the Amazfit watch you have paired.

As already mentioned, a swipe down (or pressing the ‘Up’ button) grants access to quick settings; like brightness controls, Find My Phone (which rings your connected smartphone), a torch (which turns the screen white) and theatre mode. A swipe up (or the ‘Down’ button) reveals a customisable overview that houses widgets relating to everything from real-time weather to steps and activity goals. 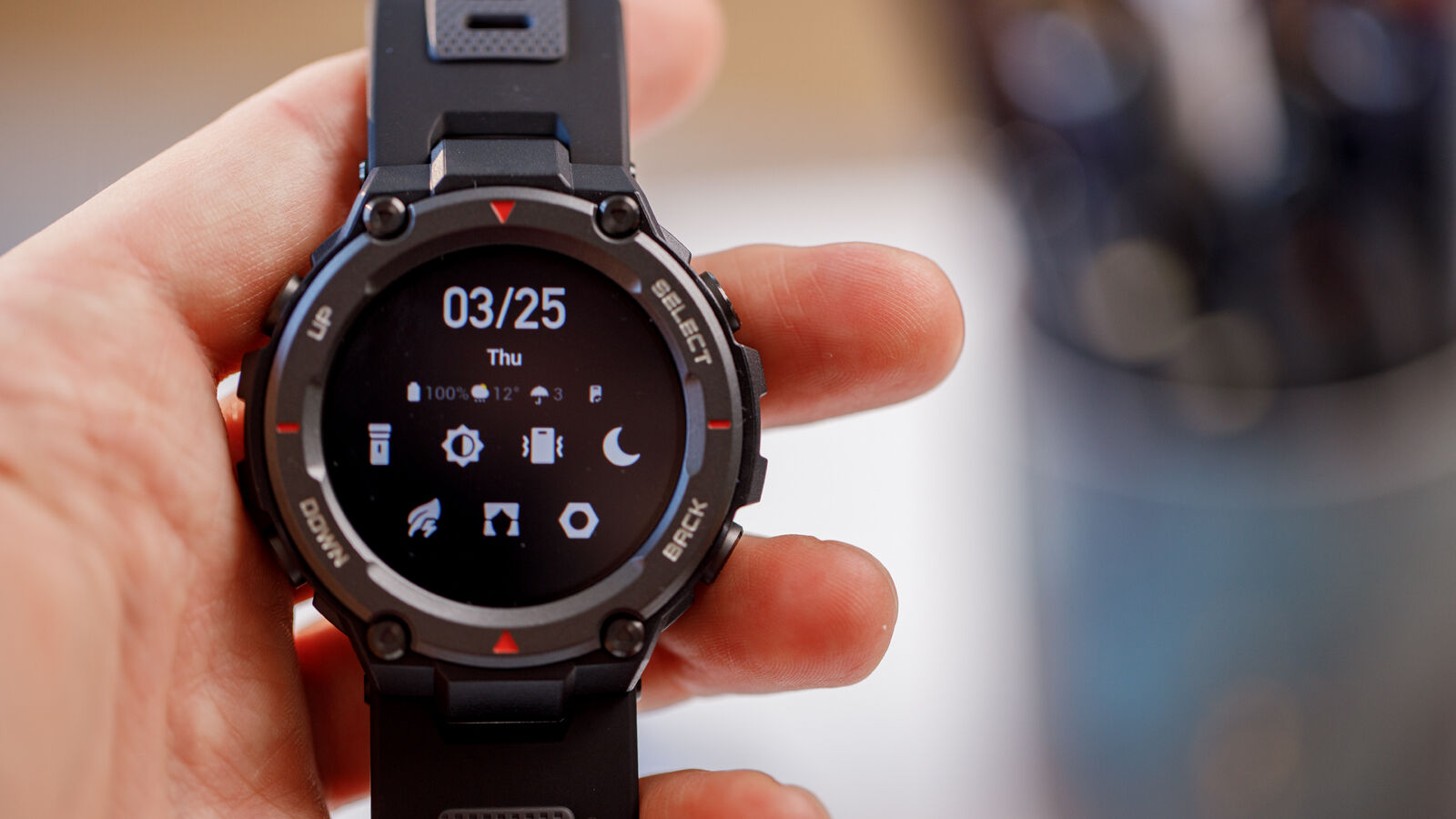 Pressing ‘Select’ when on the main watch faces acts as a shortcut button for a chosen action; set to workouts by default, while the ‘back’ button brings up the full apps menu, the order of which can be customised from the Zepp smartphone app (which also lets you hide unwanted entries from the list altogether).

If enabled, notifications are also accessible by swiping right from the main watch face, however, there’s little you can do with them beyond reading them on-watch, while the way the text formats sometimes endures strange line breaks that make them less-than-glanceable. 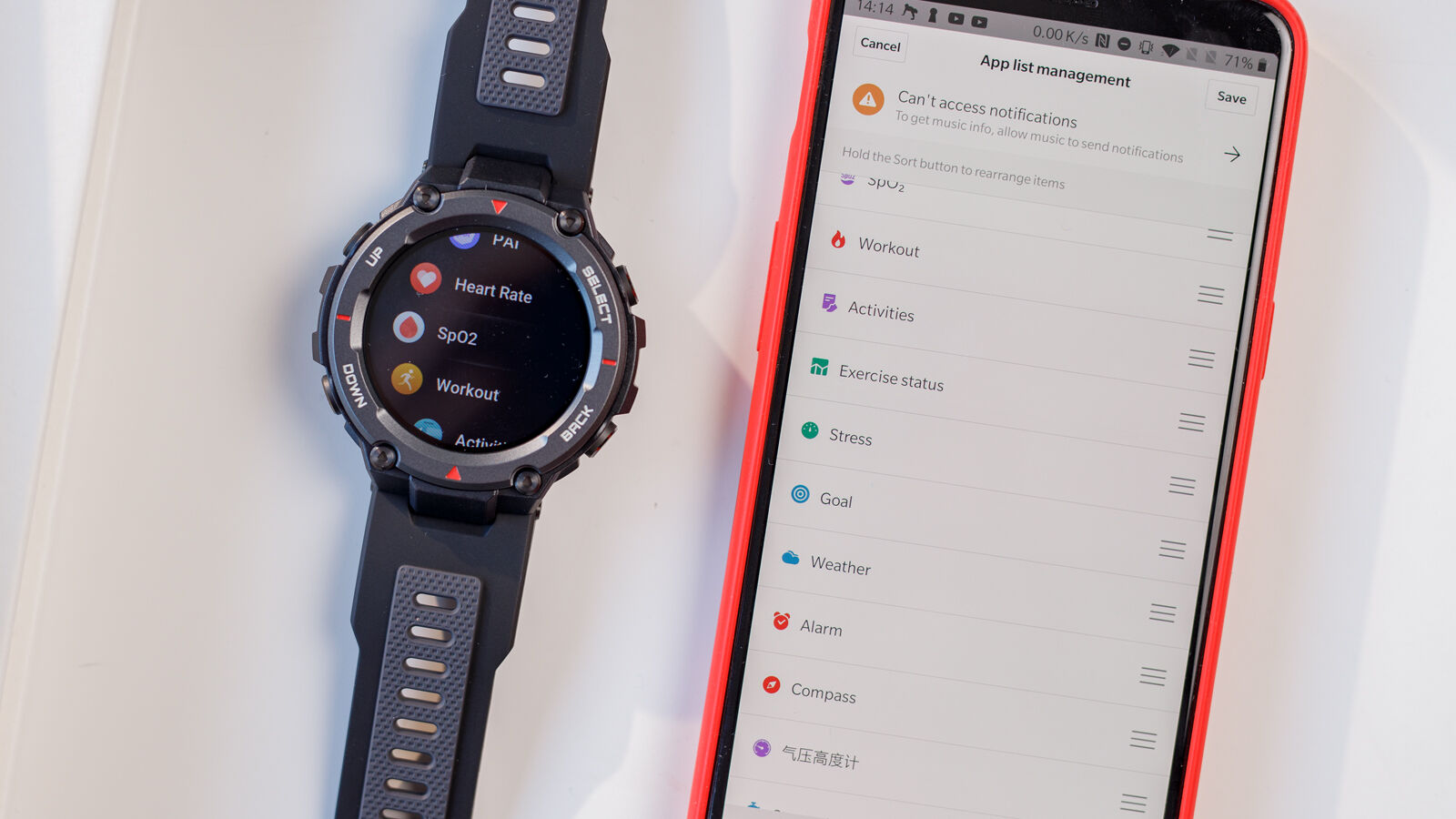 Beyond fitness features, the T-Rex Pro’s set of skills is varied, however, nearly all come with caveats. You’ll find convenient tools like remote music control (although it only works on tracks stored locally on your smartphone), an events app (but one that can only list events manually entered into the Zepp companion app, i.e. it can’t synchronise with active services like Google Calendar) and an alarms app (that’s vibrate-only, as the Pro lacks a speaker [or microphone, for that matter]).

Out the gate, fitness fans will appreciate the expanded array of supported workout modes; growing from just 14 at the original T-Rex’s launch, to over 100 with the arrival of the T-Rex Pro.

Exercises are grouped by colour within the watch’s workout menu and cover everything from walking and hiking, to cycling, open water swimming, surfing, strength training, tai chi, archery and even driving(?). 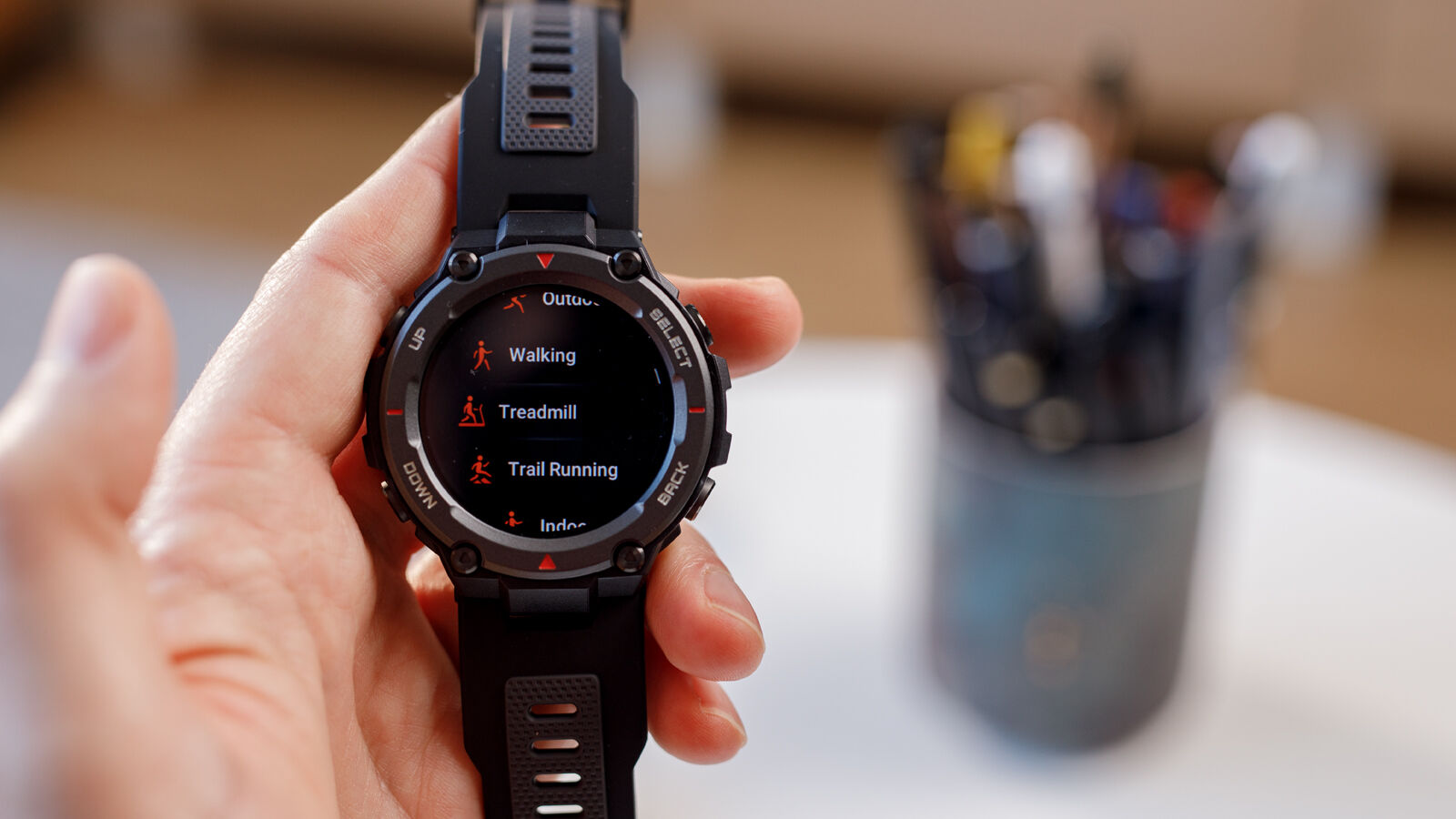 The Pro also stands apart from its namesake with a host of new sensors; more robust location tracking (thanks to support from an expanded four global positioning systems), a barometric altimeter – providing air pressure and elevation data (useful for a number of activities, including stair climbing), alongside blood oxygen saturation (SpO2) tracking – ideal for evaluating the body’s performance and recovery.

Its wellbeing features extend to dedicated heart rate, SpO2 and stress monitoring apps on-watch, as well as sleep tracking, which is best viewed in the Zepp smartphone app. Your sleep activity is given an overall score, with each night’s sleep being broken down into differing states, paired with data on ‘sleep breathing quality’ and proportions of light and deep sleep.

While a little nebulous at first glance – alongside a huge wealth of stats and data points that you can drill down into, relative to the exercise in question – the Pro’s primary fitness metric is something called PAI (Personal Activity Intelligence). According to the company that created it, it’s a measurement based on the “heart health impact of physical activity.”

The Zepp app suggests aiming for a PAI score of 100 by the end of a seven-day period (at which point it resets). In practice, I was consistently reaching between 70s and 80s by the end of each week; working out for approximately 30 to 50 minutes, three times a week. 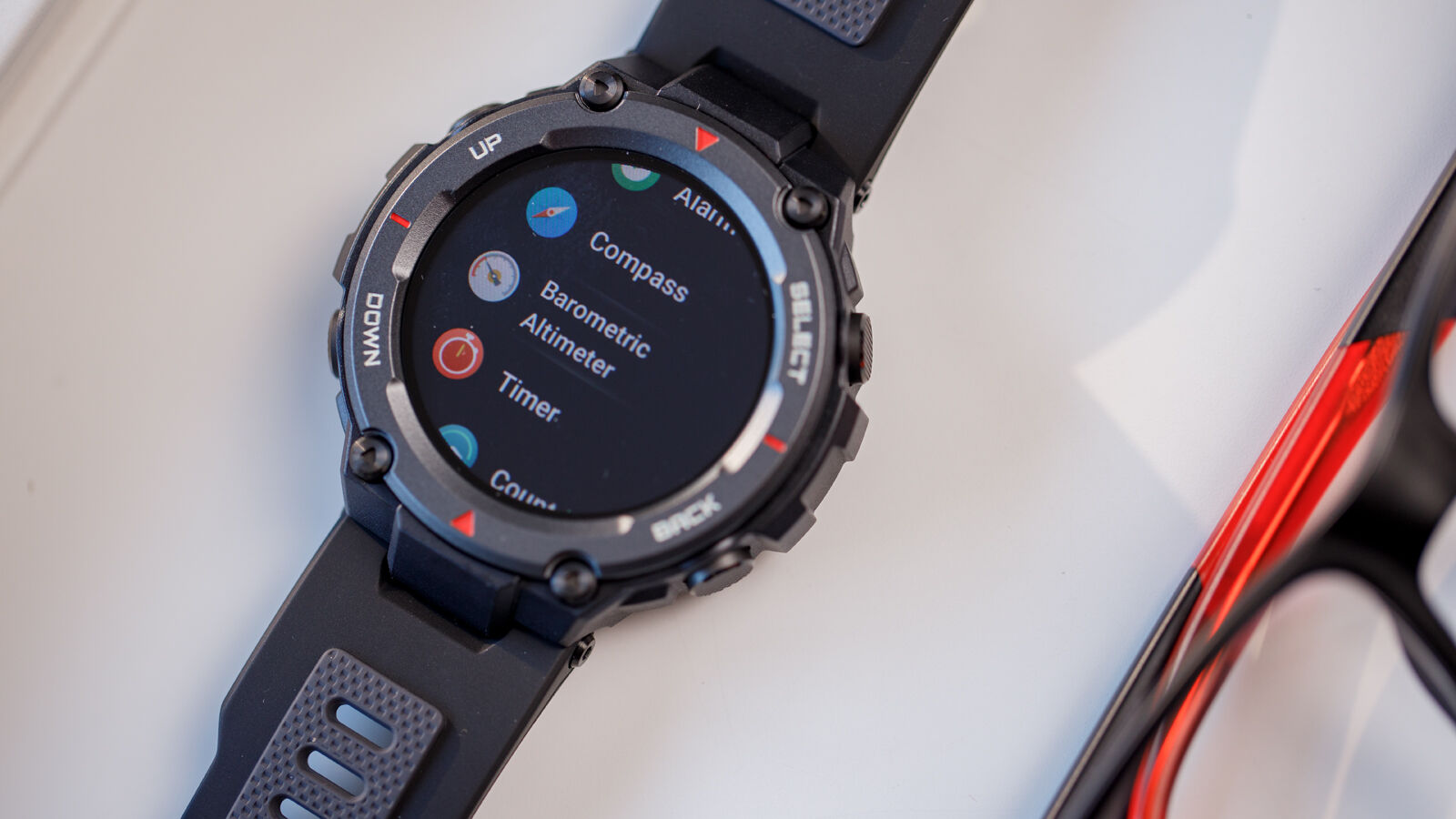 The algorithm behind PAI is designed to adjust dynamically as your fitness improves, so without longer-term testing, it’s hard to gauge whether PAI is simply a demanding metric that I was unable to reach target on, or the algorithm hadn’t yet hit its stride relative to my fitness ability. That said, it still serves as a useful catch-all indicator of daily and weekly fitness progress and if you want to glean greater insight, then between the watch and the Zepp app, those additional metrics are there too.

In terms of functionality, there’s no question that Zepp has managed to create a tracker – and by extension an ecosystem – that offers the level of insight sought after by fitness fans who value ‘the quantified self’; those likely to consider tailor-made wearables from rivals like Polar and Garmin.

The main issue with Zepp’s approach is that – like the events app and the biometric data you can input to better inform the watch’s tracking – most (if not all) of the data acquired by the T-Rex Pro remains locked within its own walled garden. Third-party services can be connected, but at review, only Google Fit, Strava, WeChat and Relive offered any such compatibility.

Considering both it and its predecessor share in the same 390mAh battery capacity, Zepp has countered the benefits of the Pro model’s additional sensors and functionality by reducing its quoted battery life by a couple of days (from 20 down to 18). 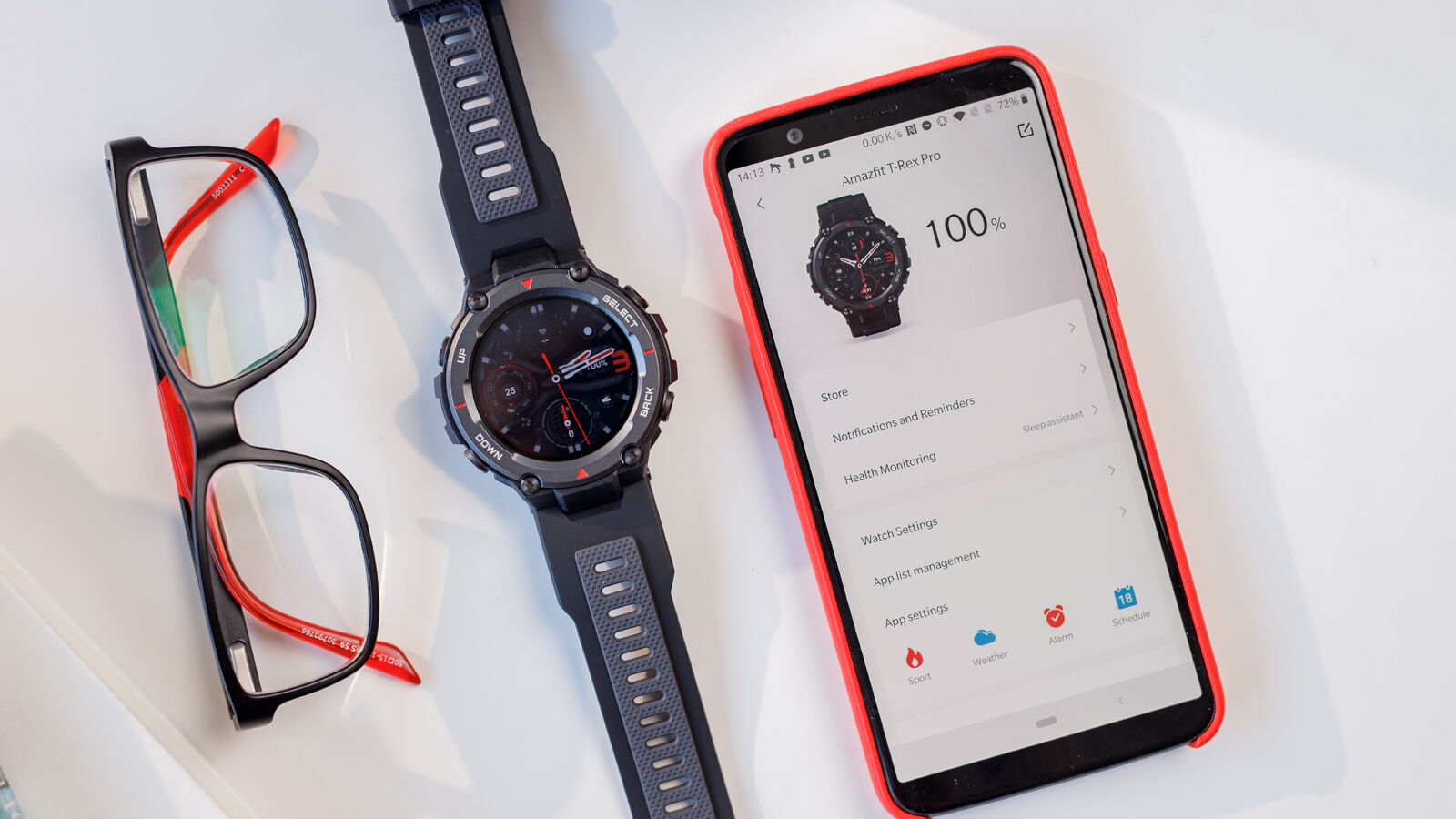 As is acutely true in the wearable space (where every milliampere-hour counts), mileage can vary pretty significantly based on a multitude of factors; from GPS usage to notification frequency.

Zepp details the conditions under which the Pro achieves its quoted 18-day battery life, however, in testing (which included 40 minutes of GPS usage [draining 3% charge] and frequent home workout sessions), I wasn’t able to push past 14 days of wear at a time.

This actually still impressed, especially when you consider the passive tracking at play (heart rate, sleep, stress etc.) meaning most will have little issue with the longevity offered up by the T-Rex Pro (and depending on usage may find that it lasts longer anyway). 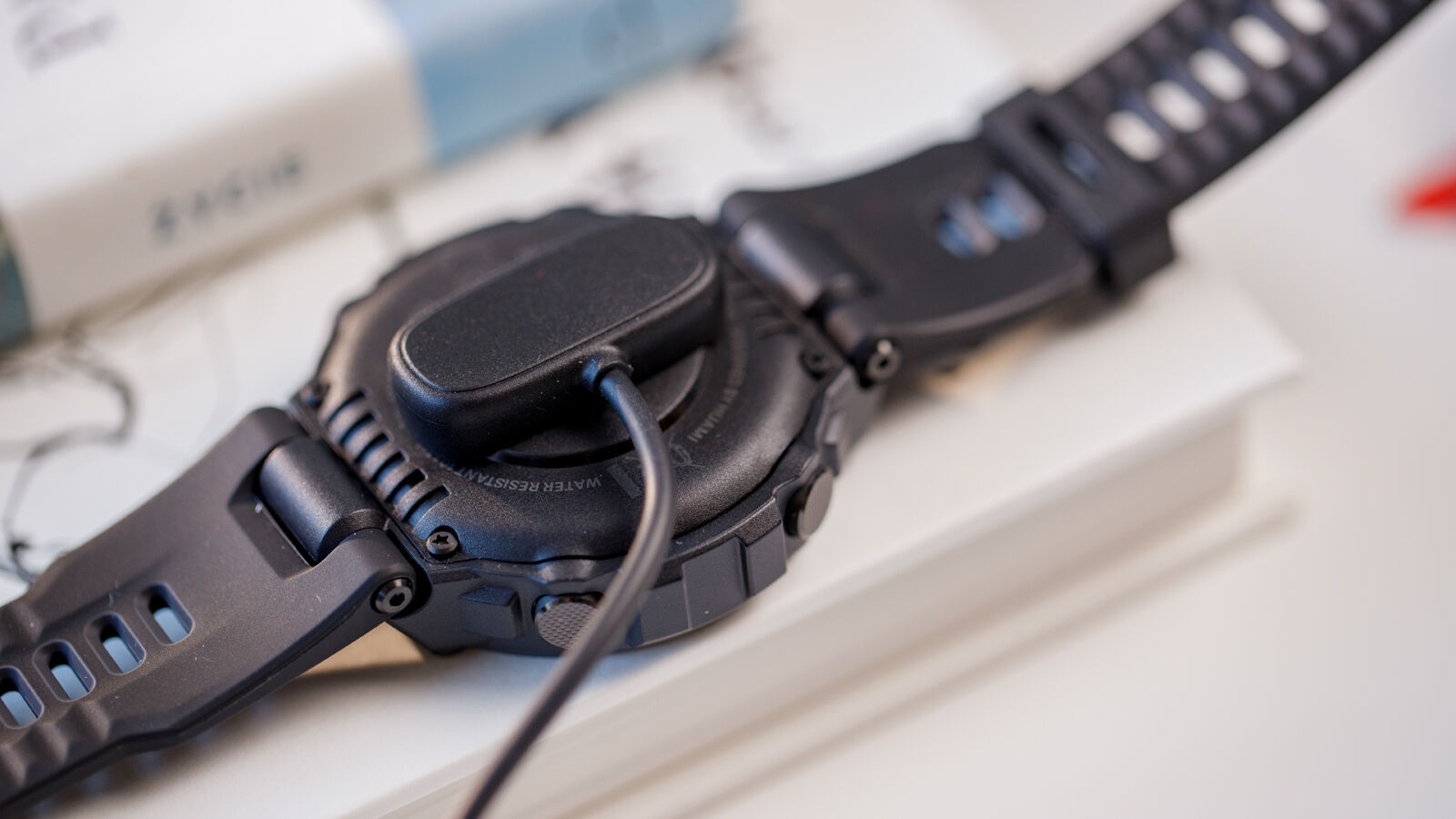 While the magnetic USB charger isn’t the most well-designed accompaniment, it does refill the watch with surprising haste, breaking past 50% in 30 minutes and fully recharging the T-Rex Pro in 75 minutes, flat.

In the UK, the Pro is available to buy from the Amazfit EU store, Amazon and Argos. While Stateside, it can be had direct from Amazfit US or Amazon US.

If you don’t need the additional features, then the standard T-Rex is still great value for money, while more advanced rugged options – like the Honor Watch GS Pro – will also appeal, if you’re in the market for a tough smartwatch.

Despite releasing just over a year on from the original T-Rex, the Amazfit T-Rex Pro represents a modest upgrade; with additional features like SpO2 tracking and a far greater breadth of sports modes than its predecessor, in a package that’s only marginally more expensive.

Improvements to the hardiness, heart rate sensor and water resistance push the Pro from a good to a great value offering, however, it’s not perfect. The software and stats it can track are relatively self-contained, with no app third-party app support or wider ecosystem to interface with. Plus, more premium features like an integrated speaker, user-accessible storage and interchangeable straps aren’t on the table, here.

If you want an affordable fitness-centric smartwatch that can hold its nerve in the great outdoors, the Amazfit T-Rex Pro is a good fit. If you want a watch that can talk with other fitness services and deliver the full platter of ‘smart’ wearable features, Zepp’s latest tough offering might feel a little soft-boiled.