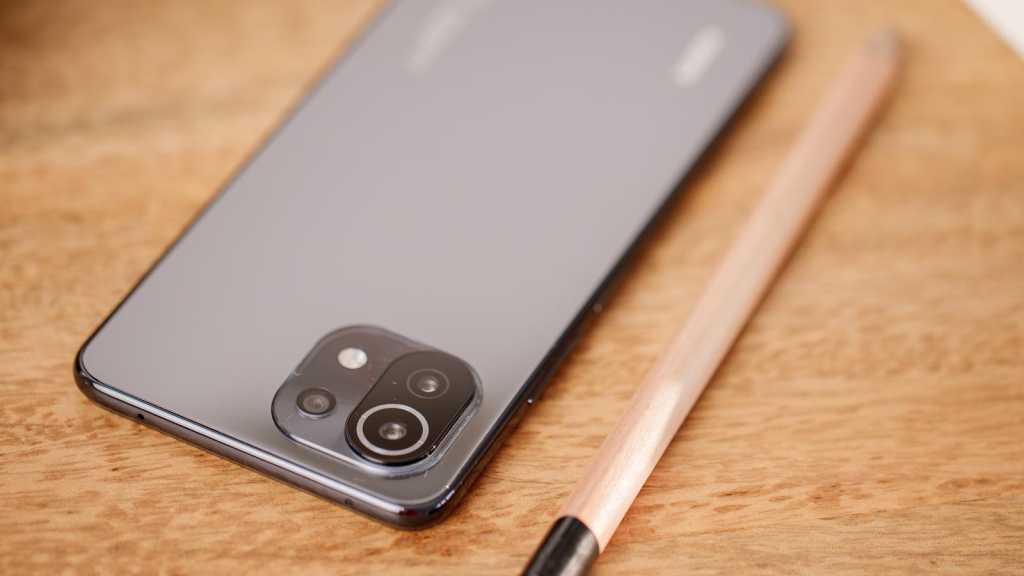 A promising display and an astoundingly thin design underpin a capable all-rounder, only out-paced by less elegant phones with a greater emphasis on value and performance, versus value and aesthetics.

Xiaomi originally introduced the first of the Mi 11 series at the tail end of 2020, bringing the phone to new markets at the start of the new year. Fast-forward to late March 2021 and we were suddenly introduced to approximately six additional members of the family, the most modest of which is the Mi 11 Lite.

Not to be confused with the Mi 11 Lite 5G – which shares in some (but not all of its) key hardware – the standard Mi 11 Lite is a svelte 4G-only offering that leads with its design and packs in a wealth of features, all underpinned by Xiaomi’s signature sense of value.

The Lite focuses on delivering a big-screened experience in an impressively thin package; something it achieves by boasting a waistline of just 6.81mm; that’s thinner than practically any other smartphone currently on the market (save for recent foldables, when unfolded), twinned with a featherweight form, at 157 grams.

Like most phones currently on the market, the rear triple camera module adds a little additional thickness to the top-left corner but even the two-tiered design – which pulls directly from the original Mi 11, with its chrome accents – is barely noticeable.

Despite its expansive, flat glass front and back, the subtle rounding at the edges and the curved metal frame mean it’s comfortable to hold, however, the mirror-like finish of the back cover is such that grip can sometimes feel in short supply and fingerprints show up all too easily – particularly in the Boba Black version reviewed here.

Xiaomi does, thankfully, include a transparent flexible case in-box, so you can still benefit from the phone’s most complementary proportions – as well as being able to enjoy your chosen finish – with a little extra peace of mind.

Speaking of finish, the Mi 11 Lite comes in three colourways: Boba Black (pictured), Bubblegum Blue and Peach Pink. Unlike the mirror polish of the black model, both blue and pink versions boast a diffused surface treatment that gives light sources reflected in the phone’s back a beautiful lustre and iridescence, as well as markedly superior resistance to smudges and smears.

That metal frame, meanwhile, appears to be too thin for a standard headphone jack (although an adapter does come in-box), however, Xiaomi did find room enough for a USB-C port, speaker grille, volume rocker, power key and most surprisingly of all – one seldom-seen but appreciated feature – an IR blaster; which ties into the Mi Remote universal remote app.

The power key also doubles as a fingerprint sensor, which proves to be comfortably placed, responsive and reliable. Face unlock is also an option, using the phone’s basic RGB front-facing camera (i.e. no Apple Face ID-style IR contour mapping is at work on the Lite).

While its design is relatively uncompromising, it shouldn’t come as a surprise that a phone as thin and as light as the Mi 11 Lite lacks wireless charging, while its more affordable standing means it forgoes IP certification against dust and water resistance too.

There’s a pleasing symmetry to the front of the Mi 11 Lite that sets itself apart from more affordable phones that try and slim down their bezels; the thickness of which appears almost equal all the way around (cheaper handsets usually have a thicker ‘chin’ of bezel along the bottom).

MIUI – Xiaomi’s Android user experience – also adds in a mountain of control over the phone’s visuals; letting you set or schedule dark mode (which turns bright UI elements dark or black – ideal for a device with a power-efficient OLED display like this one), change colour gamut and temperature to a fine degree, and switch up refresh rate.

The phone defaults to a conventional 60Hz but dip into the settings and you’ll find the option to switch to 90Hz. MIUI doesn’t explicitly say whether this particular high refresh rate implementation is dynamic or fixed (the former referring to optimising refresh rate based on app or action) but know that you’ll gain a far slicker, smoother-looking user experience, at the expense of a little battery life.

One-handed mode is part of the equation too, which feels essential on the Lite’s broad display, shrinking the UI down to bring everything within a thumb’s reach with a simple swipe across the navigation keys at the bottom.

At the point where bezel meets frame, Xiaomi has managed to cut a near-imperceptible earpiece slit that outputs sound with impressive clarity. What’s more, the phone’s stereo setup delivers far clearer and louder sound overall than you’d expect from a device as thin as this.

If the display settings were any indication, Xiaomi’s MIUI 12 – as it appears on the Mi 11 Lite – is a feature-packed experience. This is a double-edged sword, however, granting users an astounding level of personalisation and customisation but at the same time presenting a cacophony of options and functions that will baffle even long-time Android users; at least at first.

Most Chinese phone makers have either toned down (in the case of Huawei and Oppo) their Android skins or all but reverted back to near-stock (Vivo) when bringing their phones to international audiences. While this is partly true of Xiaomi too, the global build of MIUI 12 still feels uniquely complex and a tad overwhelming.

The Mi 11 Lite also comes pre-loaded with a relatively high percentage of bloatware for a modern smartphone; with third-party entries like eBay and PUBG Mobile present out the box, as well as a heap of Xiaomi’s own apps that either double up on Google’s offerings (like the Mi [web] Browser) or serve what most would consider niche purposes, like the (barcode) scanner app, the standalone screen recorder app, the separate Security and Cleaner apps, and so on.

There are even instances of adverts popping up within some of these first-party apps, which cheapens the overall experience somewhat.

Once you adjust to MIUI’s intricacies, however, there are elements that will undoubtedly appeal. The amount of fine-grain control over how everything looks and behaves is incredibly rich; from fundamental decisions – like ‘app drawer or no app drawer’ to whether or not the status bar shows the phone’s connection speed.

There are also a heap of playful UI elements and animations that dress everything in an additional level of polish not found on other user experiences; the About phone section has a great example of this, where the visual representation of storage used sloshes around like a liquid, using the phone’s accelerometer and programmed physics to respond to the phone’s orientation and movement.

Qualcomm’s mid-range Snapdragon 700-series chipsets are generally well-respected, with last year’s Snapdragon 765G proving capable enough to find its way into numerous flagships; like the Google Pixel 5 and LG Velvet, as well as some of our favourite mid-range phones of the year, such as the original OnePlus Nord.

The Snapdragon 732G powering the Mi 11 Lite (which debuted inside Xiaomi’s own Poco X3 NFC, last year) is down towards the lower end of the 700 line but still proves to be a solid choice.

The phone feels completely comfortable carrying out everyday tasks like messaging, browsing and streaming video, with the only real sign that the Lite isn’t powered by a flagship-class SoC presenting itself most readily by longer-than-expected app load times.

Beyond that, the Lite still feels wholly capable as a gaming phone, defaulting to ‘high’ graphics within Call of Duty: Mobile – with real-time shadows enabled (but effects like depth of field, ragdolls and anti-aliasing disabled).

Up to 8GB of LPDDR4X RAM and 128GB of UFS 2.2 storage (as tested) should also prove enough for most users’ needs and collectively be able to deliver two to three years of competent use (software update support from Xiaomi permitting).

For such a thin device, Xiaomi has still managed to slot in a surprisingly capacious 4250mAh battery (that’s larger than an iPhone 12 Pro Max‘s).

As Android phones go, that isn’t the most cavernous of cells but it should see you through a day of use comfortably, with charge to spare.

The phone’s power menu is a little confusing to interpret but supplies you with useful stats like estimated usage remaining and not one, but two levels of battery saver; the first of which restricts background app activity, clears the phone’s cache whenever it’s locked and disables quality of life features like raise-to-wake, while the ‘ultra’ variant additionally restricts performance and functionality to further longevity.

MIUI also highlights when battery-draining apps are at work and suggests other changes that can be made to improve longevity; like switching the screen’s refresh rate down to 60Hz (all the Mi 11 Lite benchmarks in this review were performed with the display set to 90Hz), turning off location services, haptic feedback and more.

Xiaomi also includes 33W fast charger in-box, which refills the Mi 11 Lite back up to 43% in just 30 minutes, 97% in an hour and a full charge in an hour and ten minutes flat.

The camera module on the phone’s back looks similar in design to the standard Mi 11 but the Mi 11 Lite sports a wholly different set of sensors; with a 64Mp lead camera, an 8Mp ultrawide, a 5Mp ‘telemacro’ snapper and a 16Mp hole-punch front-facer.

A thin phone with a thin camera module also means a complete lack of OIS, however, EIS (electronic image stabilisation) proves pleasingly confident when shooting video – which tops out at 4K resolution/30fps.

While, generally, stills across all the Mi 11 Lite’s cameras appear competent and pleasing to the eye, there are a few recurring traits that won’t appeal to everyone. Although the option of AI image enhancement is just a tap away, the default colour science (when it’s disabled) looks a hair too desaturated, while fine details are processed to the point of oversharpening.

Dynamic range on the secondary sensors is the biggest discrepancy between the phone’s cameras, while the Lite sometimes struggled to find focus, particularly when macro shooting.

By default, the lead camera captures 16Mp pixel-binned snaps, while the ‘telemacro’ can be set to shoot 2x zoomed shots or – by way of a toggle – macro photos.

Xiaomi’s camera software is, you guessed it, feature-packed; with a heap of modes, including unique creative options like Clone, Vlog and Dual Video, as well as a number of icons that you’ll need to familiarise yourself with by way of experimentation in order to learn what they all do.

The Xiaomi Mi 11 Lite is now available from the company’s own Mi Store, across numerous European markets, including France and Spain. Pricing starts at €299.90 for the 6GB RAM/64GB storage variant.

This also places it in the same ballpark as the new OnePlus Nord CE 5G and the company’s own Redmi Note 10 Pro, which undercuts the Lite in many regards, save perhaps for its design.

On first impressions, despite its standing as the lowliest member of the Mi 11 family, the Mi 11 Lite ‘wows’ with its wafer-thin form. Dig a little deeper and you realise it’s also imbued with a stunning display, capable internals and a feature-packed user experience.

If design isn’t at the top of your list of priorities in a new phone, your money will likely go further elsewhere (although you’re still likely to find something suitable within the Xiaomi catalogue), however, the Mi 11 Lite delivers a pleasingly well-rounded experience for the price, complete with a few unique touches.