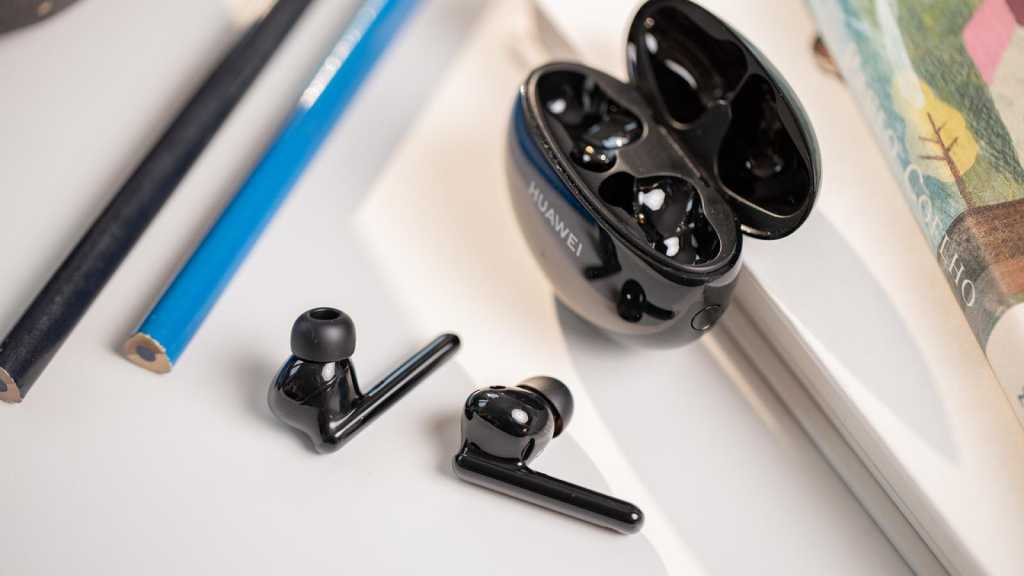 While the FreeBuds 4i are an improvement on the 3i in some ways, the case design is worse, there are also software issues and more competition this time around.

Huawei has now made a number of different pairs of headphones and the firm’s latest budget wireless earbuds are the FreeBuds 4i. They cost just £79 but have active noise cancelling (ANC).

Wireless earbuds with ANC at under £100/$100 still remain quite elusive so although they’re not perfect, the FreeBuds 4i are a decent choice if you want a nice balance of sound quality, noise cancelling and battery life.

The buds themselves are your typical wireless earbud shape with stems, similar to the AirPods. They look nice in the Carbon Black colour I tested but you can also get them in Ceramic White or Red, too.

However, I have some qualms about some other design choices, namely around the case. 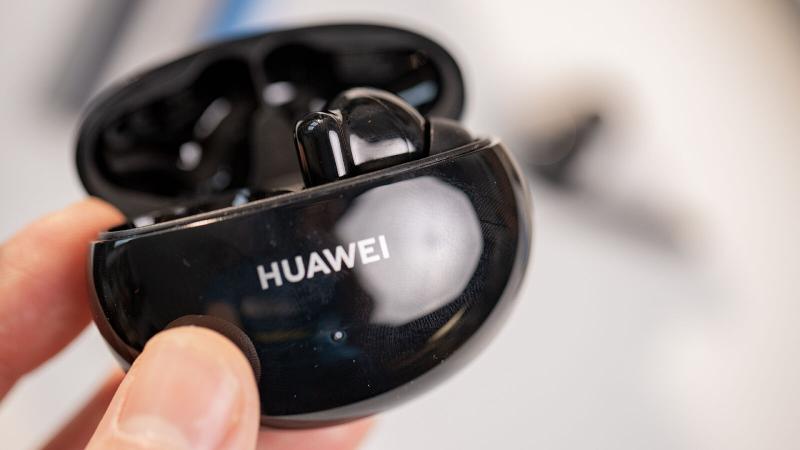 This tiny egg-shaped housing for the earbuds is an awkward shape to handle and the glossy finish makes it very slippery. A flat section on the back means you can place it down on a flat surface to use the USB-C charging port on the bottom, but you can’t have the lid open without holding the case.

Considering the lid needs to be open while pressing the button on the side to get the buds into pairing mode (unless you have a Huawei phone with EMUI10 for smart ‘Pop-up’ pairing), it gets a bit awkward. And it’s also not obvious that the buds need to remain in the case for pairing, with little information in the supplied paperwork.

While a small case might be desirable, it appears to have come at the cost of the earbuds facing the wrong way. So, they need rotating 180-degrees before they are facing the right way to insert into your ears.

And that’s if you can even get them out of the case. As we’ve found with previous FreeBuds, it’s very hard to grip the earbuds and remove them from their magnetic caverns with the same ‘high-polish’ finish as the case.

Once I had them out, rotated and inserted, I found the FreeBuds 4i comfortable without swapping the tips down to the small size like I normally must do – there are three sizes included. 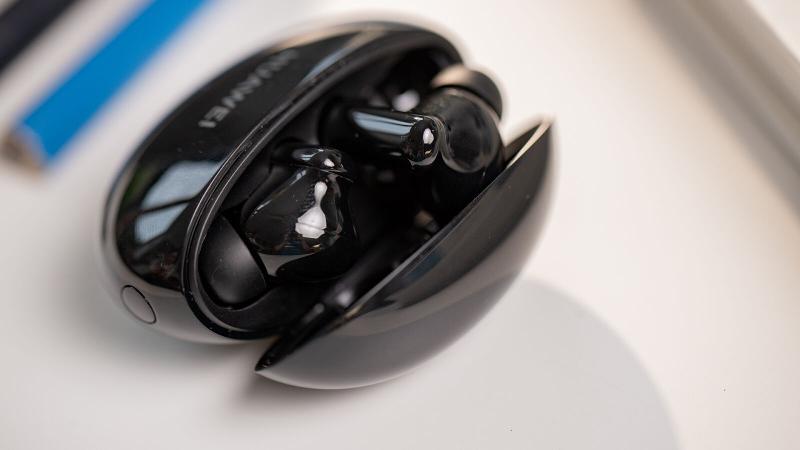 As per the FreeBuds 3i, there are touch controls on the outside of each bud. By default, they do the same thing; double-tap to play/pause or long-press to change the noise cancelling mode. You’ll need the app to customise the controls (more on that later) but it’s a shame that there’s no option for a single or triple-tap making control limited.

While the FreeBuds 3i have an IPX4 water resistance rating, basic as it might be, the 4i specs make no mention of this.

With 10 mm dynamic coil drivers and ‘sensitive polymer composite diaphragms’ the FreeBuds 4i offer decent sound quality. They have the latest Bluetooth 5.2, although Huawei doesn’t list the codecs available beyond mentioning AAC in some small print.

The sound quality is impressive for an affordable pair of headphones, with decent bass and mid-range. The top-end is nothing to write home about but this shouldn’t bother most listeners. The FreeBuds 4i sound good for a range of music genres from bass-heavy dance to guitar-led folk. 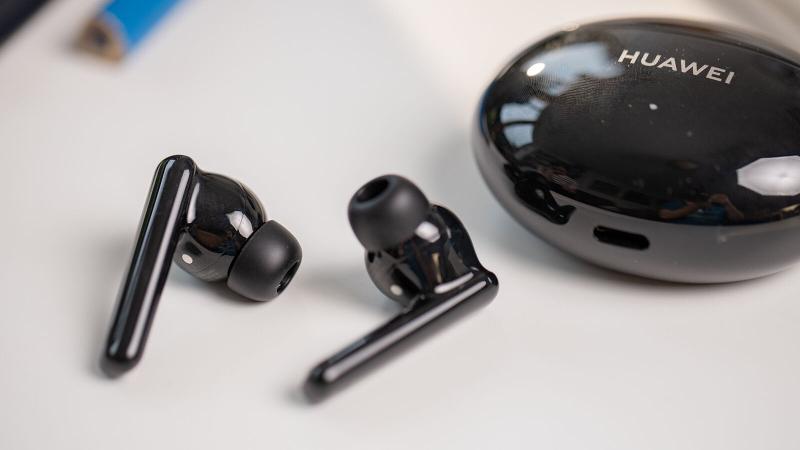 As with any earbuds, a good fit is important to get the best sound but assuming you do there’s good passive noise isolation and an immersive sound. You needn’t pump the volume up too high either, and if you do then distortion is minimal.

You’re probably going to buy them for the active noise cancelling though. This is decent enough, able to block out sounds around you to a good level – even the sound of my loud keyboard was reduced to small clicks.

There’s no ability to adjust the level of ANC, you’ll have to buy more expensive earbuds for that but you do get an Aware mode. This purposely lets in sound so you can have a conversation with someone without removing the earbuds or you just need to be safe near busy roads etc.

It works well but again there’s no user adjustment so you either use it or not. 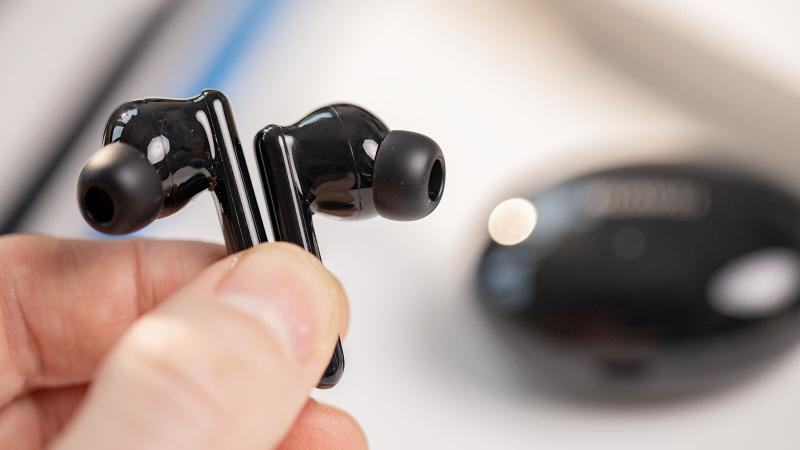 There’s little in the way of other features, perhaps unsurprisingly considering the affordable price. Huawei does tout low latency which I can confirm keeps things like video nicely in sync with the earbuds.

There are decent enough microphones to use for calls and there’s also a wear detection feature. This means the FreeBuds 4i know when they’ve been taken out of your ears but it didn’t pause my music. I only got a sound when placing them back in my ears.

Oddly, there’s no mention of this feature in the app or the main website page for the earbuds, just the spec sheet.

While the performance is good, Huawei still needs to sort out the software experience. The firm has its AI Life app which allows you to control many different products from your phone but the current version available for Android and iOS doesn’t support the FreeBuds 4i.

It’s the same thing I found with the Huawei Sound speaker, so users must get it from the Huawei App Gallery instead, which in turn needs to be directly downloaded and installed. 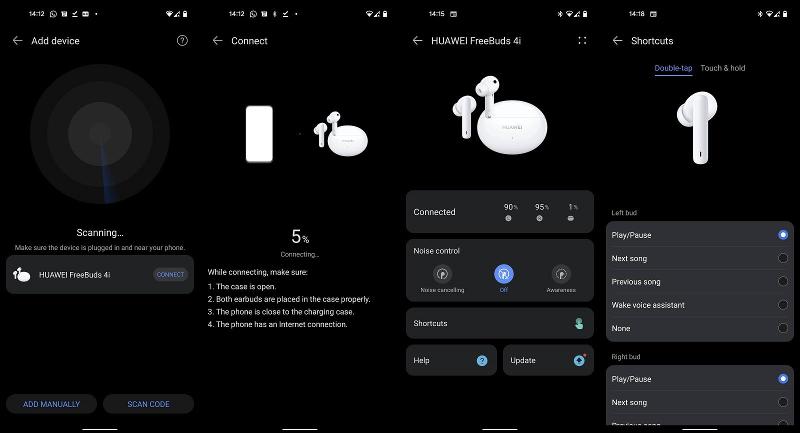 This is overly complex, especially when AI Life is available on the official app stores so any user will expect to have support.

You can use the headphones without the app – it doesn’t do very many things – but you’ll be limited to the default touch controls.

Battery life is hugely improved compared to the FreeBuds 3i, which could only last 3.5 hours per charge or more like 2.5 with ANC.

Now, the FreeBuds 4i can last up to 10 hours, according to Huawei. That’s at 50% volume with ANC turned off.

In my testing starting at full charge, they would drop about 20-30% after 2-3 hours usage with ANC on. That’s roughly 10% per hour making Huawei’s claims perhaps a little conservative. Include the case and they can go for a theoretical 22 hours, which isn’t bad.

There’s also quick charging so you can get up to four hours of usage from a 10-minute charge. 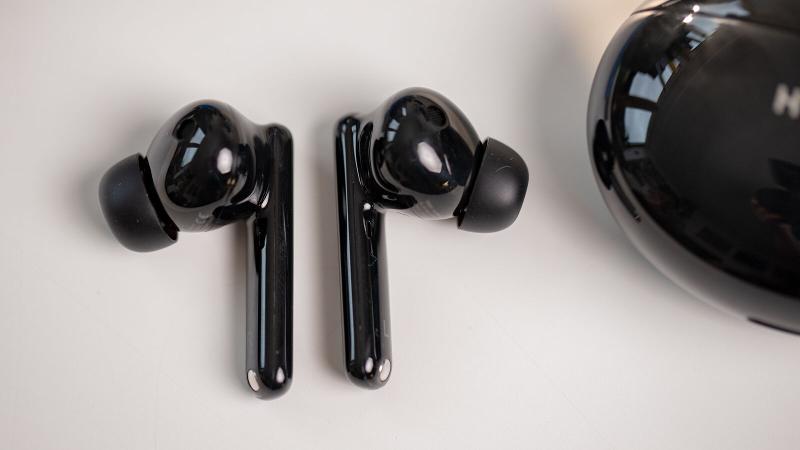 As mentioned at the top, the Huawei FreeBuds 4i are priced at just £79.99. Well within our £100 cap for budget headphones and £10 cheaper than the FreeBuds 3i when they first launched.

Although you might be looking to spend less, wireless earbuds with ANC at under £50 are very rare.

You might consider the Enacfire A9 but Huawei’s deal is good and at the time of writing, you get some freebies too. There’s a £39 Huawei Band 4 along with a free case worth £19.99.

The FreeBuds 4i’s main competition is the Anker Soundcore Life A2 NC which are also £79.99 but you can see more rivals in our best cheap true wireless earbuds chart.

The Huawei FreeBuds 4i are a decent step up from their predecessor with longer battery life at a lower price.

Even having active noise cancelling at under £100 helps them stand out in a very crowded market and the performance, along with sound quality, is decent. There’s no control over the ANC but there is an aware mode.

They’re comfy and last a decent amount of time, if nothing special, along with fast charging. However, there are some issues to be aware of including the awkward case and limited touch controls.

Then there’s the fact the wear detection mentioned in the specs doesn’t do anything and you’ll need to have Huawei’s App Gallery to download the AI Life version that supports the earbuds.

All these things mean that you’re better off with a Huawei phone to use the FreeBuds 4i with. Even if you do, the identically priced Anker Soundcore Life A2 NC are very similar earbuds that offer a better all-round package.

If these are both too expensive, check out the Enacfire A9.