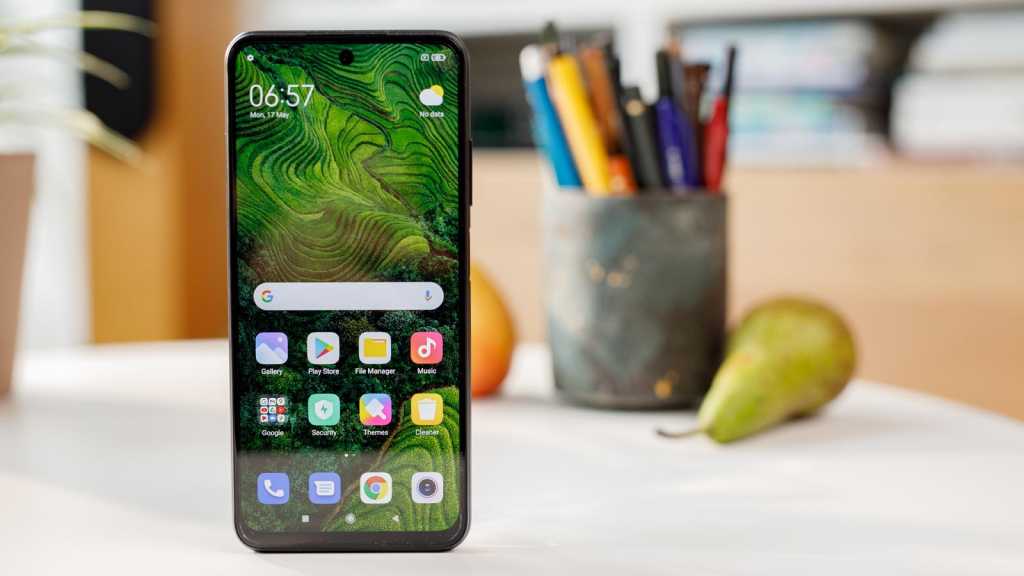 An affordable dual-SIM 5G phone that compromises on the display and cameras to keep the price low. If you need 5G on a budget, it’s still a great choice.

When you’re on a budget it’s inevitable you’ll have to make compromises in one area or another. When it comes to 5G phones, if the price is low you should expect to find corners cut elsewhere to make the numbers add up.

And so it is with the Redmi Note 10 5G, which at £199/US$199 is one of the cheapest 5G phones you can buy. Unlike the regular Note 10, which has a lovely AMOLED display, the 5G model has to make do with an IPS screen, less RAM and no waterproofing.

The Note 10 is a phone you can’t officially buy in the UK, making it an irrelevant comparison. But it’s there to illustrate the point anyway. Read our full Redmi Note 10 series buying guide.

The great thing about budget Android phones these days is that they’re hard to tell apart from flagships. It’s only when you start looking deeper that you discover the differences: the basic camera setups, the lack of water resistance and wireless charging and more.

However, if you must have 5G as the top priority in a phone and you don’t want to increase your budget, the Redmi Note 10 5G is certainly a compelling option. Most phones at this price are still limited to 4G.

It’s not the only one, either. Realme’s 8 5G offers similar specs for roughly the same price and there’s also the Poco M3 Pro, which is really the Redmi Note 10 5G by a different name – much like Honor and Huawei phones.

Poco used to be a Xiaomi brand sold alongside Redmi, but it split off in January 2021, so the two phones were likely designed alongside each other before that happened.

As Xiaomi said at the phone’s launch, the Note 10 5G is all about its 5G. And that means dual-SIM, dual-standby 5G. You can pop two 5G SIMs into the tray (which stops you from adding a microSD card, by the way) and you can then receive calls and messages on both SIMs.

Of course, while you can get 5G from your carrier, often for the same price as 4G, it’s worth checking whether you have coverage where you live and work. The 5G rollout has been quicker in cities than rural areas, but even in cities, there are still parts where you can’t get a 5G signal.

Like so many Android phones, the SIM tray is near the top on the left, with a volume rocker opposite, below which resides the power button. That has a fingerprint scanner in it, my least favourite type of biometric authentication.

Setting up fingerprints was fiddlier than on front- or rear-mounted scanners, perhaps because of the narrow area available to ‘see’ your finger. I had to re-register the first finger as unlocking was a bit hit and miss. After that, unlocking still wasn’t guaranteed on the first attempt, which quickly became irritating.

The other reason to dislike it (as with rear-mounted sensors) is that you can’t easily unlock the phone when it’s lying flat on a surface. Face recognition is supported but comes with the usual caveats of being relatively insecure.

I was sent the Graphite Gray model which is perhaps the least interesting colour on offer, but even that looks great when the light hits it. It has an unusual effect where the reflection makes the back appear concave when, in reality, it’s flat and only curves at the sides.

It’s unusual (but not for Redmi phones) to see a 3.5mm headphone jack, FM radio and IR blaster, but it’s a shame that that unlike some of its siblings, the Note 10 5G doesn’t have stereo speakers. You do get Bluetooth 5.1, 802.11ac Wi-Fi and in some regions (including the UK), NFC. This means you can use Google Pay for contactless payments.

There is no form of waterproofing, though, but the other Redmi Note 10 phones all have an IP53 rating.

Though its 6.5in screen is normal by 2021 standards, this is still a big phone – and a tall one because of its 20:9 aspect ratio and the fact it doesn’t run right to the top and bottom. The central punch-hole camera doesn’t really get in the way and the factory-applied screen protector is a nice touch.

Unsurprisingly, it’s a relatively thick phone because of the huge battery and it’s even chunkier when you put on the supplied clear silicone case.

The display itself isn’t a great example of IPS technology. Colours, even in ‘vivid’ mode look pale and viewing angles aren’t brilliant at all. In fact, when I first turned it on, I thought it might be some kind of privacy feature that makes the screen unreadable to those sitting next to you. Brightness and colour saturation really drop off unless you’re looking square-on.

Xiaomi touts a 360° light sensor which automatically adjusts brightness to perfectly match the environment. It doesn’t work well and gets confused when you hold the phone near the top. I ended up turning auto-brightness off.

At this price – which is impressively low for a 5G-equipped phone – you can’t really complain about that or the plastic frame and back panel.

The is because it’s designed specifically for budget 5G phones. It has a 5G modem built-in, as well as enough power to drive 90Hz displays, up to 64Mp cameras and supports UFS 2.2 storage.

Manufacturers don’t have to use all its capabilities, but the Redmi Note 10 5G is notable for taking full advantage of the latter which is faster storage than normal. There are two models to choose between, one with 64GB of storage and one with 128GB. Both have 4GB of RAM.

In Geekbench 5, the Redmi Note 10 5G managed a multi-core score of 1624. That’s a bit behind the Snapdragon 732G that you’ll find in the Poco X3 NFC (currently the best-value budget phone that costs the same as the Note 10 5G) but not so much that you’d notice in day-to-day use.

In fact, apart from the occasional stutter, performance is more than acceptable at this price. Apps and games load quickly and run smoothly.

By default, the screen will automatically change the refresh rate, reducing it to save power when 90Hz isn’t required, and boosting it when it is, such as scrolling through social feeds and playing games.

Just note that the app or game has to support 90Hz for it to run at that speed.

Unfortunately, Xiaomi’s software blocks GFXbench from running and it’s the same with 3DMark. So it’s not possible to compare graphics benchmark scores with rivals.

But as long as you only want to play games casually, the Redmi Note 10 5G will happily oblige. Thanks to Game Turbo, performance is optimised when you’re playing a game and it will adjust settings to ensure the phone doesn’t overheat.

Playing Asphalt 9 and Pokémon GO, performance was surprisingly smooth for a phone at this price, though occasional slowdowns and jerkiness served as reminders that this definitely isn’t a flagship. Yet, with the fast UFS 2.2 storage, games load as quickly as you’d expect from more expensive phones.

Look at the rear camera module and you can be fooled into thinking the Redmi Note 10 5G is, again, a more expensive phone. But in reality, there’s just one camera with a 48Mp sensor and an f/1.8 lens.

The other two are a 2Mp macro camera that you’ll almost never use and a 2Mp depth sensor that’s there for realistic-looking blurry backgrounds when you use the portrait mode.

Another sign of a lack of outright performance is that video is limited to 1080p at just 30fps, and there’s no optical image stabilisation (OIS). You can shoot slo-mo video at 120fps, but that’s at 720p.

Photos, by default, are shot at 12Mp, not 48. That’s because it uses a pixel-binning technique that’s common to a lot of high-resolution sensors that offers a better-looking processed image than if you shot at 48Mp all the time, which you can if you’re prepared to go the extra mile and tap on More and then 48M. There’s no option to make the main Photo mode 48Mp, likely for storage reasons.

Those 12Mp photos are decent enough: they look sharp, colours are accurate and they’re fine for sharing online. Check out our camera samples in the Flickr gallery below.

Oddly, Macro isn’t one of the main modes, nor will you find it under More. It’s awkwardly in the hamburger menu in the Photo and Video modes. But when you use it, there’s no focus indication so it’s very difficult to tell when you’re the right distance from the subject. As it’s difficult to tell – in bright light – whether the image on screen is in focus, you’ll tend to get blurry, unimpressive images.

It may be only 8Mp, but the selfie camera isn’t bad at all. Photos are generally sharp and colours fairly natural. The skin smoothing also flatters, and it’ll even take a stab at a selfie portrait, though look closely and subject isolation is far from perfect, notably blurring hair when it shouldn’t.

With such a large-capacity battery, you can expect a good two days of moderate use before you need to recharge the Redmi Note 10 5G.

Even when watching video or playing games, the battery didn’t drain exceptionally quickly, but if you are planning to spend eight hours playing Call of Duty Mobile, then you’ll need a power bank or to be near a mains socket.

The only disappointment here is the slow ‘fast charging’. The 18W charger in the box is still technically ‘fast’ but not by 2021 standards. A 30-minute charge from empty saw the battery reach 27% and 50% in an hour. But a full charge took well over two hours.

Again, it’s not too surprising, but still worth knowing, that there’s no wireless charging.

MIUI 12 can be overbearing at times, but it’s not a bad overlay for Android 11. It’s fairly clean and has taken some obvious inspiration from iOS for some of its notification panels. That’s no bad thing.

All Google apps are present and correct, so you have full access to the Play Store (unlike Huawei phones).

The notification shade shows 12 shortcuts by default and, naturally, you can customise them.

You can buy a Redmi Note 10 5G from the Mi website, from Amazon and other retailers.

There is a 6GB version available in other regions, but not in the UK.

If you buy one in the first two weeks (the phone went on sale on 27 May), you’ll get a free Mi Band 6 to sweeten the deal.

See alternative in our roundup of the best budget 5G phones.

Now, thanks to the Dimensity 700 processor, there’s a selection of very similar 5G phones available for a third cheaper but with 90Hz screens.

Xiaomi’s effort in the Redmi Note 10 5G is a good one, but there are plenty of signs that it’s built on a budget. So if you won’t be happy with a screen that has mediocre colours and viewing angles, or decidedly average cameras, then it may not be the best choice for you.

Then again, the alternatives aren’t a whole lot better. The Realme 8 5G may be thinner, lighter and have a 16Mp selfie camera, but it uses the slower UFS 2.1 storage. So tradeoffs are inevitable: it’ll be down to which components you value most that determines which of the bunch is the best.