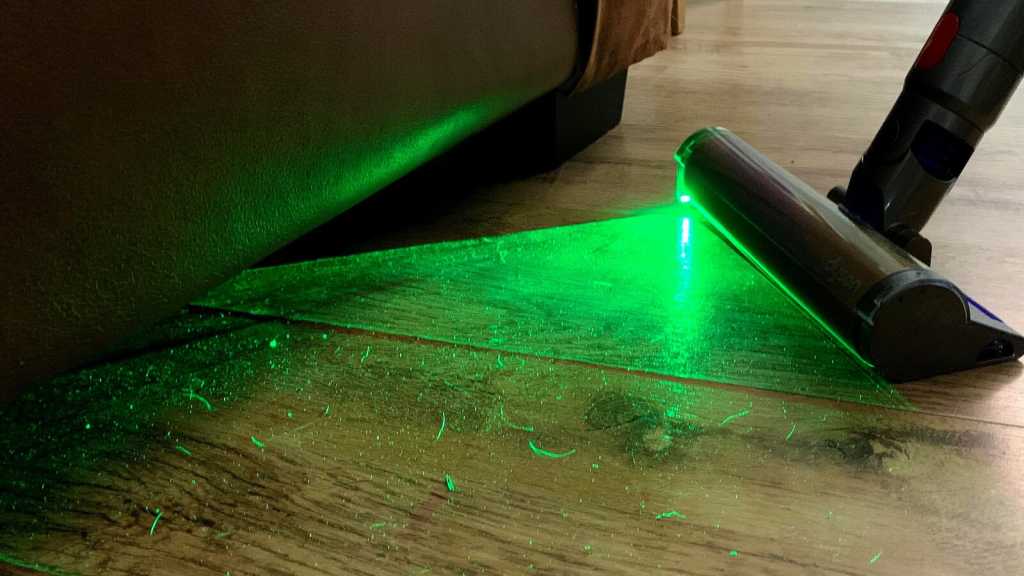 Highly impressive cleaning power and versatile enough to clean hard floors, carpets, stairs and even your car. The V15 Detect’s laser shows you where dirt is and the brushes don’t get tangled up with hair.

Dyson’s cordless vacuum cleaners might be expensive, but you certainly can’t accuse the company of not innovating. One of its new models for 2021 is the V15 Detect, which has a green laser that reveals dust and dirt you can’t normally see.

There’s also a clever piezo sensor in the body of the V15 which counts dust at various sizes, displaying it in real-time on the screen. So, you can see by the numbers that your vacuuming is making a difference.

That’s not all: the V15 comes with a nifty attachment with a cone-shaped Hair Screw tool that won’t get tangled with hair: it simply falls off the end and is sucked into the bin. The main high-torque brush also has a special anti-tangle design, meaning you’ll spend less time removing hair and can get straight to vacuuming. 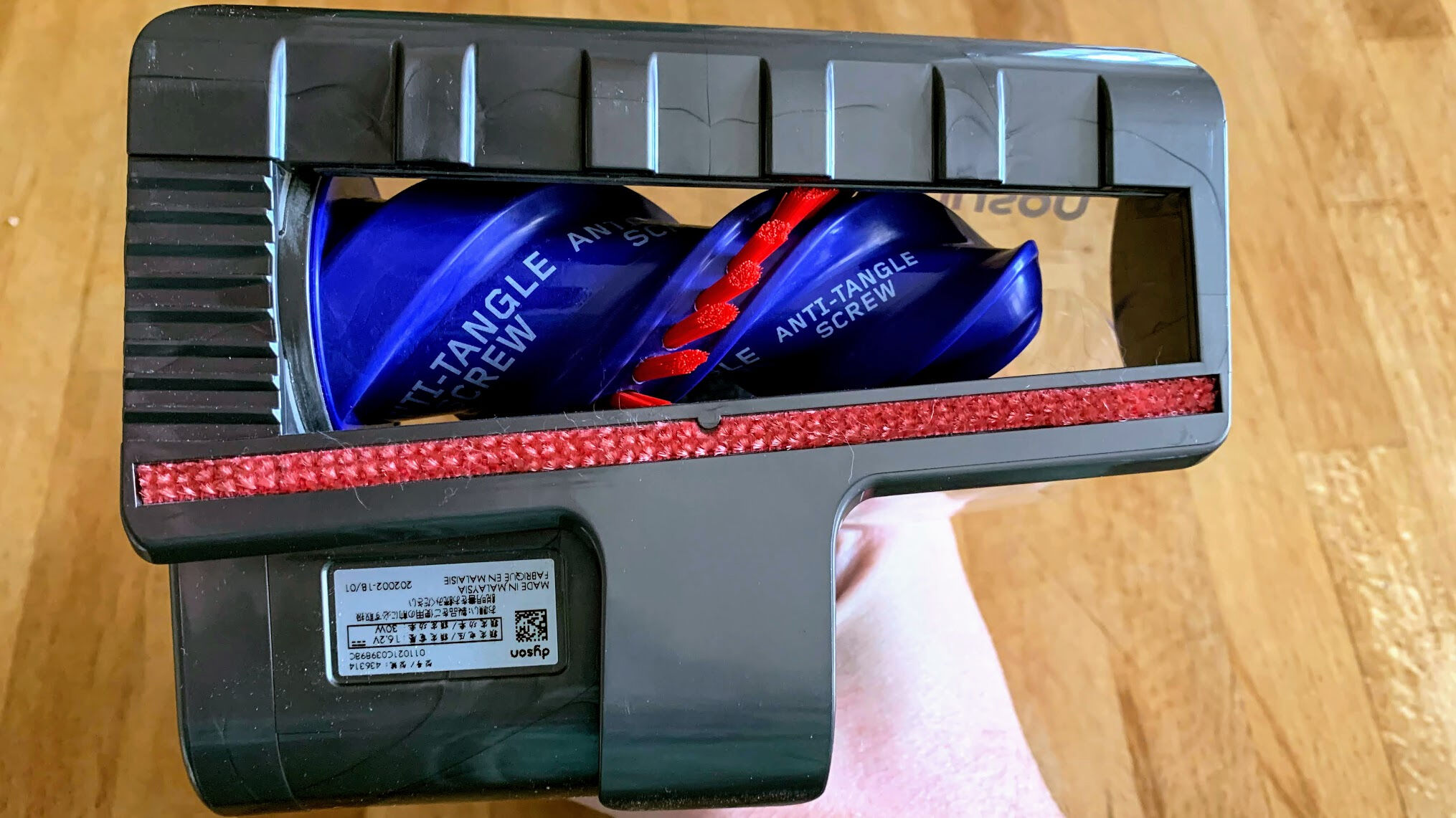 If you already own a V11, reviewed, you’ll find the V15 Detect very familiar. That’s because the two models are extremely similar: the latter is effectively an upgraded V11.

As well as the laser and dust counting, the Detect is more powerful, with 240 ‘air watts’ of suction in Boost Mode compared to the 185AW of the V11.

Like all the latest models, the V15 has a ‘click-in’ battery. Replacing it takes mere seconds and means you can buy a second one to have ready charged to swap in when the first runs out. Which it will in about 20 minutes if you’re exclusively vacuuming carpets with the high-torque brush in Auto mode. Otherwise, you can get up to 60 minutes out of a charge, and a full charge takes a foot-tapping 4.5 hours. 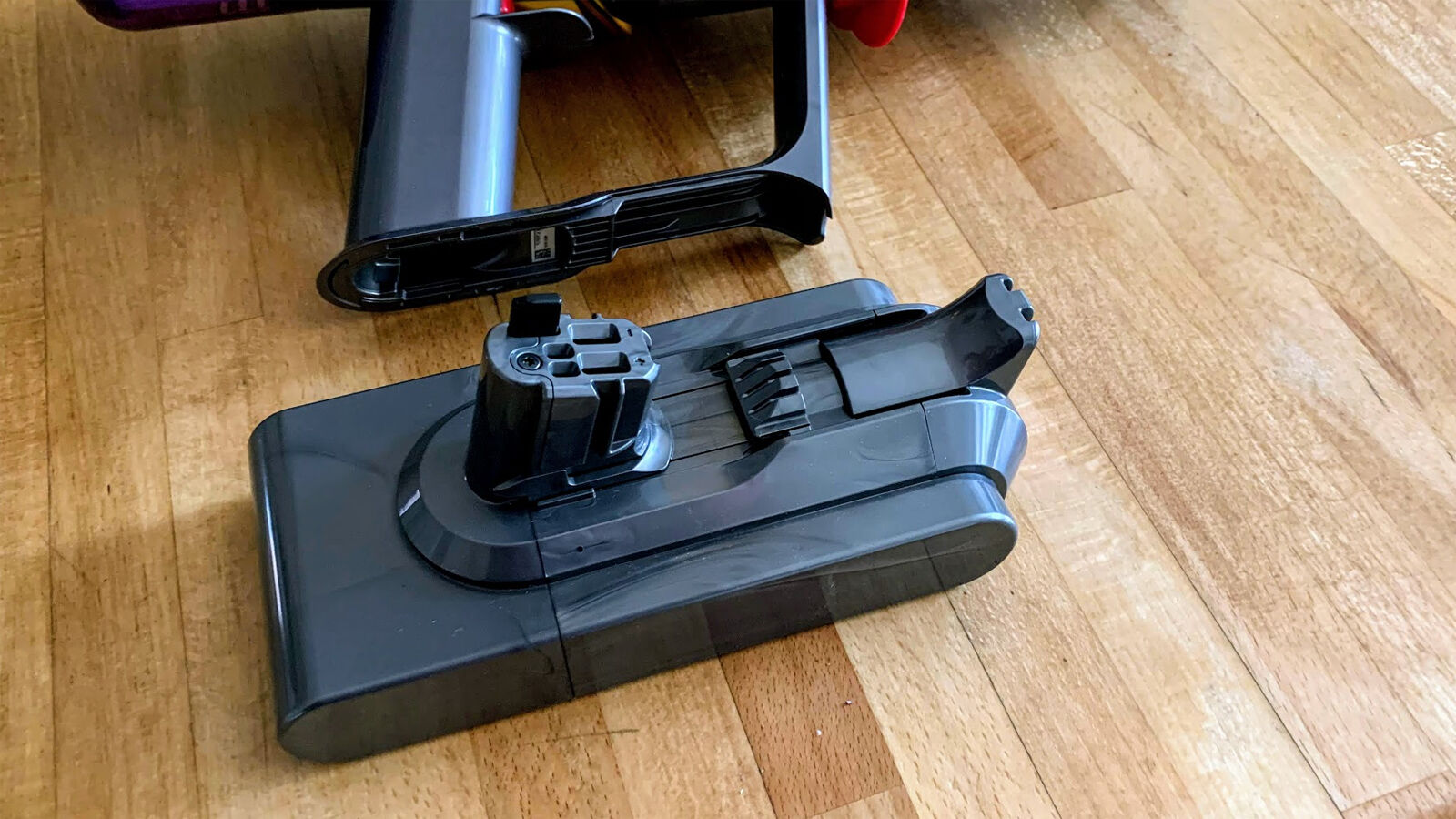 Original V11 models didn’t have quick-release batteries but if you buy one now, they do.

The V15 has the same point-and-shoot bin which is quick and easy to empty into your bin. You have to remove the wand or any attachment first, but that’s a minor niggle.

Something that’s more frustrating is that the V15’s own bin is smaller than it looks. As with the V11, there’s an easy-to-miss MAX mark about half way up, and you’re not supposed to allow it to fill up more than that.

With the amazing suction power on offer, you’ll be surprised how quickly it fills up. Then again, the alternative is a bigger, heavier, more expensive Outsize model so, on balance, a couple of extra trips to empty the V15 isn’t such a deal-breaker.

The circular screen can seem a lot like a gimmick, but it shows a lot of useful information – primarily an estimate of how many minutes the battery will last in the current mode.

It also shows warnings for when the brush or wand is blocked, and animations explaining how to clean the filter, which is washable. 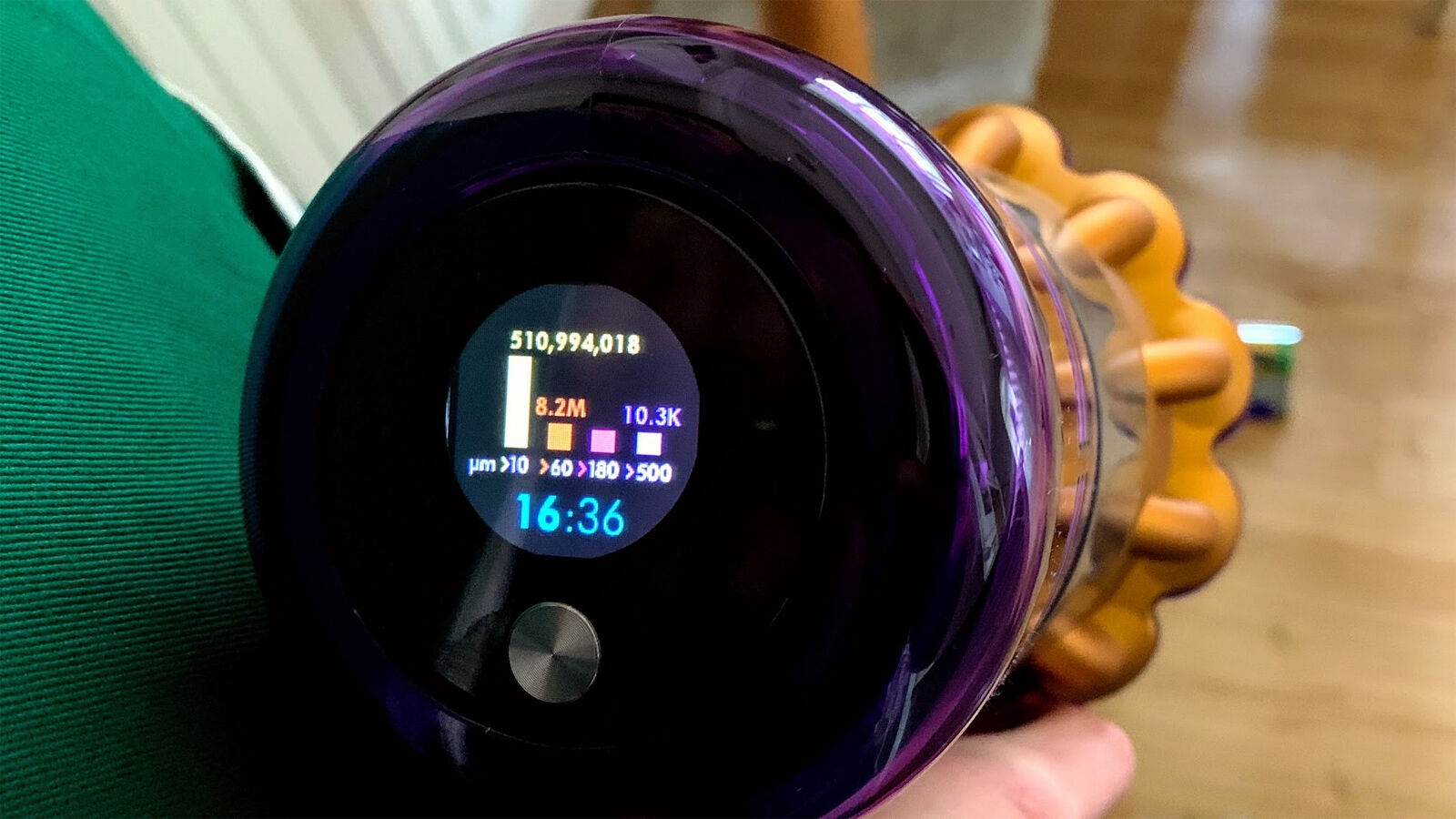 New for the V15 is the bar graph showing the number of particles at different sizes which have been vacuumed up and are no longer on your floor. Dyson says this offers scientific proof of a deep clean, and it can certainly become addictive watching the numbers climb as you clean. It can also be slightly depressing seeing how dirty your floors were.

In the box you get a wall dock, for storage and charging, as well as the various tools: crevice, soft dusting, combination, hair screw, laser fluffy and high-torque heads. 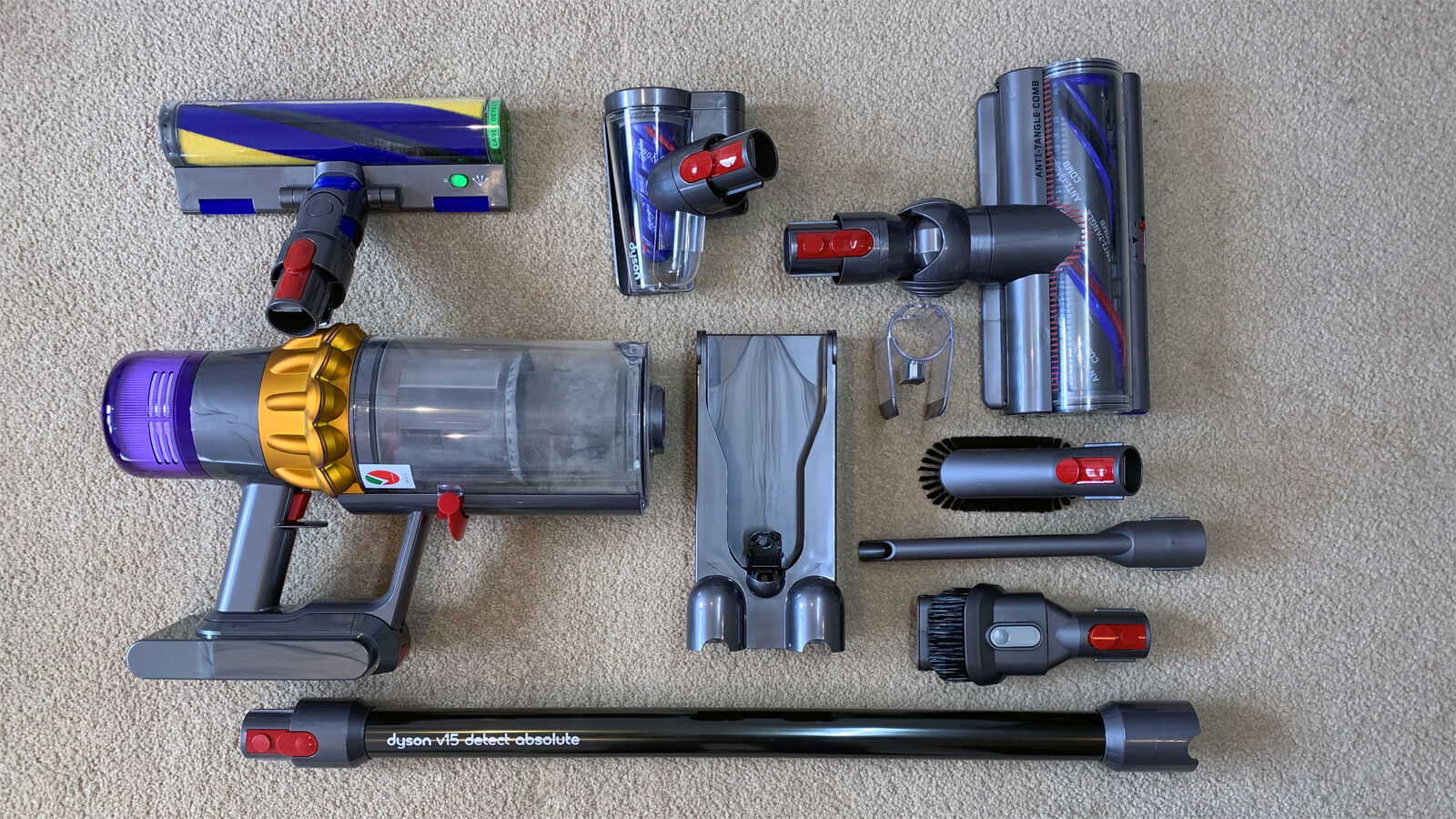 Although it weighs a fraction over 3kg, the V15 doesn’t feel heavy to use. When using the wand and floor brushes, a lot of that weight is taken by the floor itself, but even when you use it handheld to clean the stairs or your car, it’s never uncomfortable.

Both the fluffy hard-floor and high-torque brushes are impressive in their own ways. The laser works really well in dimmer lighting, clearly showing up dirt and dust that you might otherwise miss, and not just at the edges and in corners.

Other vacuums have LED headlights, which certainly help compared to having none at all – as with previous Dyson stick vacuums – but the laser avoids lighting up the floor too much and offers better contrast. 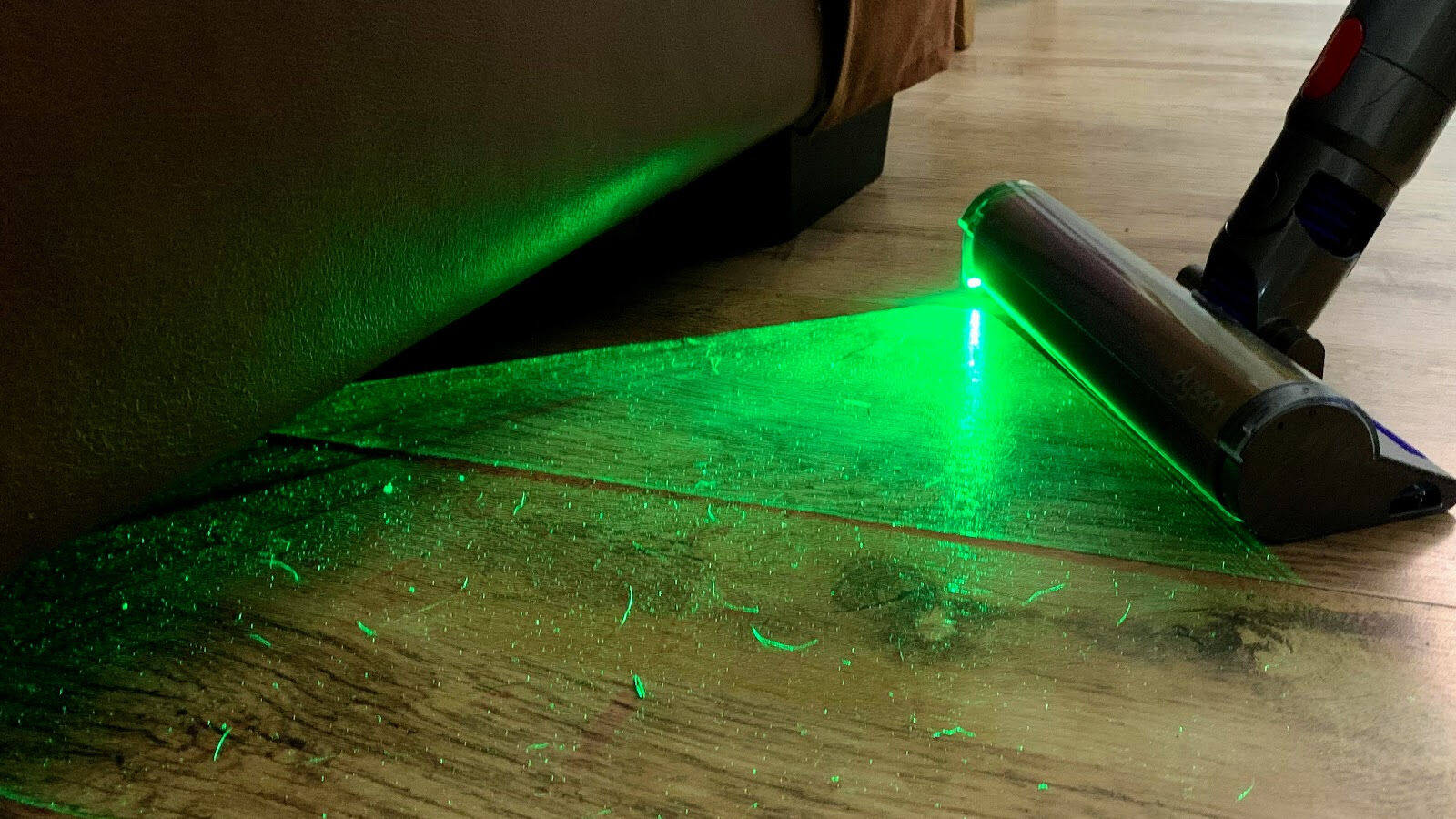 In bright light the dust is less visible but even if you can’t clearly see it, the V15 knows how dirty the floor is thanks to the piezo sensor and adjusts suction power accordingly.

Once you’ve made a pass and pulled the brush back towards you, the laser again clearly shows how much cleaner that area is. It’s very effective at picking up dust as well as larger particles and leaving hard floors reassuringly clean.

You can’t really use the fluffy brush on carpets and that means swapping over to the high-torque head. This doesn’t have a laser, which wouldn’t show up dust on carpets anyway, but it is amazingly effective at removing dirt. 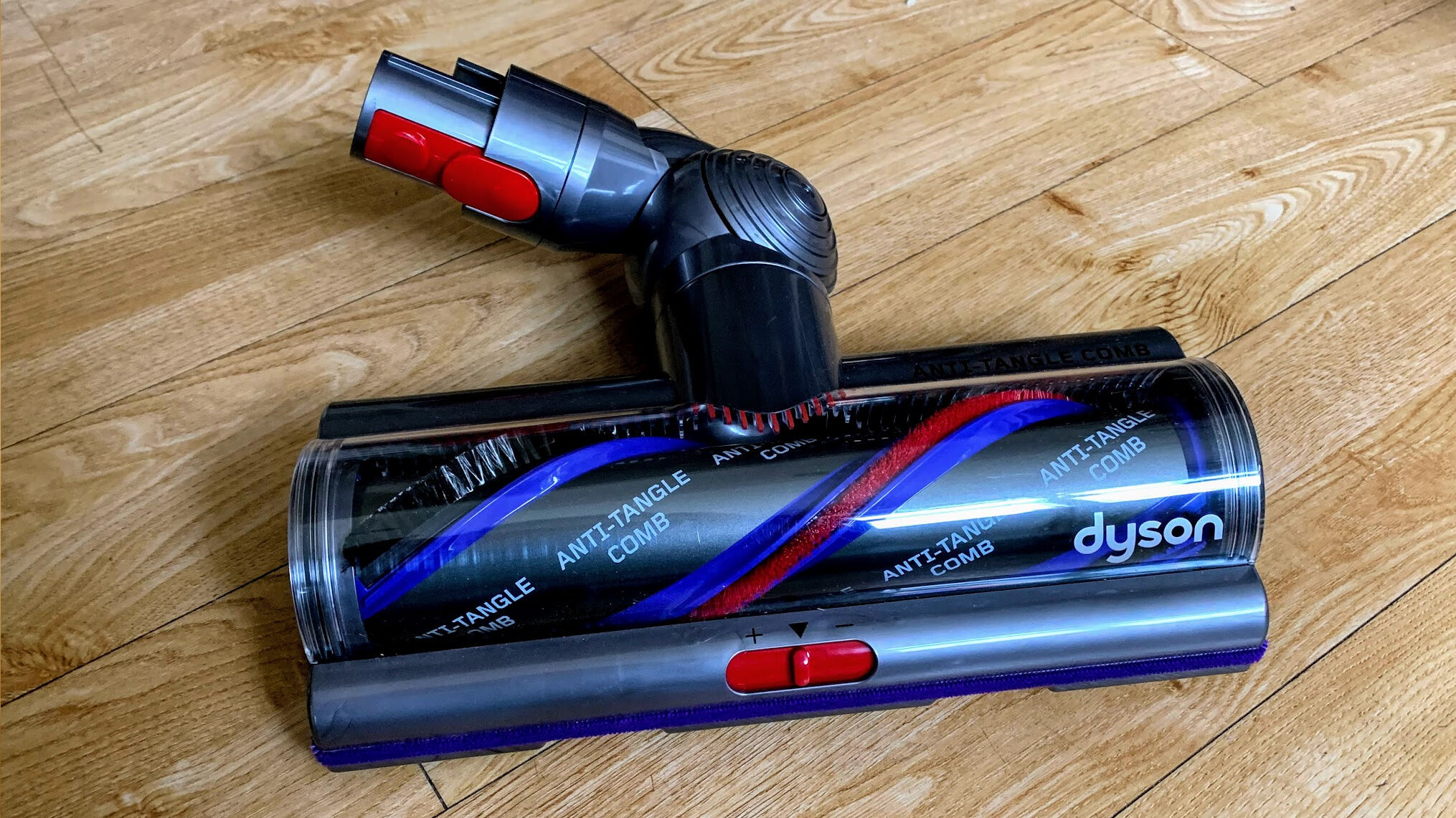 It has the same DLS (Dynamic Load Sensing) tech as the V11’s High Torque head, meaning it will increase suction when it detects a carpet – for more effective cleaning – and lower it on hard floors, which increases runtime.

Again, the piezo sensor increases suction when a high level of dust particles are detected and you can really feel the effect of that, as well as see it visually on the screen and in the bin as it rapidly fills with dirt.

In fact, vacuuming just one room that had been cleaned recently with a V11 showed the extra power in the V15 with the combination of the new brush, sensor and upgraded motor. It quickly filled its bin with dirt in just a few minutes. On the one hand I was disappointed there was so much dirt, but on the other, impressed that the V15 was able to remove it.

Even though it doesn’t have the same cone design as the hair screw brush, the anti-tangle claim is just as valid: after a full house clean, no hair was left wrapped around the High Torque brush.

If there’s one downside, it’s that it can be hard work to manoeuvre on deep-pile carpet as there’s so much suction. You can adjust the slider on the front to reduce it, however.

Effectively, then, the V15 Detect Absolute (to give it its full name) is better value even if, objectively, it’s still one pricey vacuum.

It’s cheaper than the V11 Outsize at £649.99, a model about to be replaced by the Outsize Absolute+ which adds the laser and piezo sensor to the larger model.

If you don’t have this much to spend, Dyson offers cheaper models, but without the dust-revealing and counting features found here. And, naturally, not quite as much cleaning power.

For these and other alternatives, see our roundup of the best vacuum cleaners.

The V15 Detect is a great all-round cordless stick vacuum. It’s equally adept at cleaning hard floors and carpets, and becomes a lightweight handheld that’s great for stairs as well as cars.

As it’s bagless, there aren’t really any on-going costs and thanks to the anti-tangle designs, the brushes don’t require as much maintenance as older Dyson models.

If you can afford it, you won’t be disappointed.