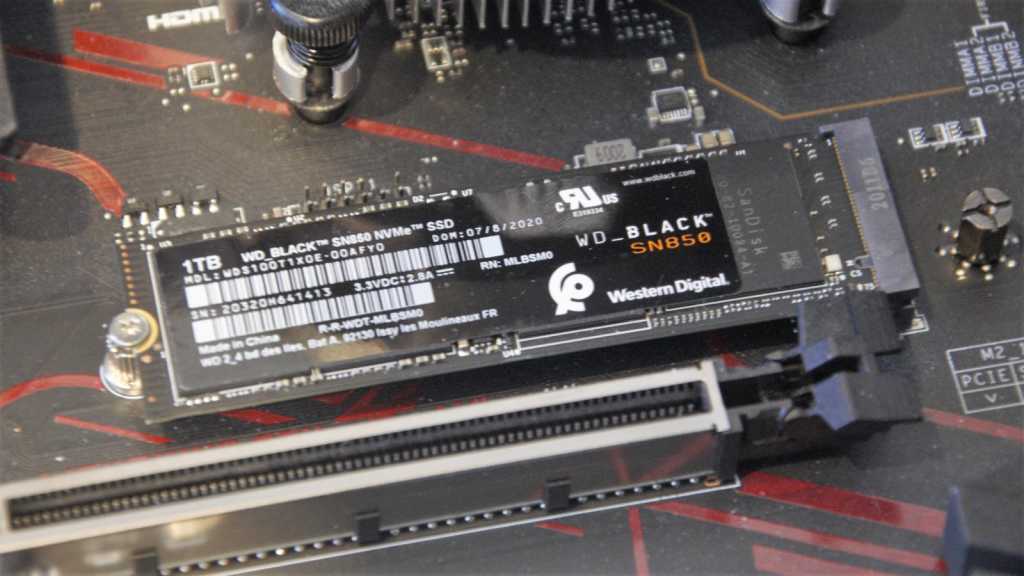 Although there’s no hardware encryption and the heatsink is an expensive extra, the SN850 is an affordable a speedy PCIe 4.0 NVMe for those wanting the latest SSD tech.

Considering that Western Digital (WD) is a business built on mechanical drive storage, those running it have made an impressively smooth transition to solid-state solutions, with many of its SSDs being highly popular.

First with 2.5in SATA drives and then with external USB connected storage, the range of WD SSDs has grown exponentially and now includes NVMe M.2 modules.

Many of these solutions are price-sensitive designs that deliver good performance at an attractive cost for those that want to upgrade their computers with something substantially better than spinning metal discs.

But alongside the mainstream offerings, it has also introduced some enhanced lines for computer enthusiasts, often under the ‘Black’ branding, and this review covers the latest of these.

The WD Black SN850 offers headline 7,000MB/s read performance exploiting PCIe 4.0 bandwidth for those that have that technology. Is this a drive that will only interest those with a need for speed, and is getting that premium experience worth the asking price?

M.2 NVMe drives don’t offer many aesthetic opportunities to designers since they fit into a tightly defined space, and once inside the computer, they’ve rarely seen again.

The WD Black SN850 doesn’t break any of those specification rules, being ostensibly an edge-connecting stick designed to fit into a de facto 2280 M.2 slot. It has a label on one side covering the surface mounted chips and a few visible tracks on the underside, as 99% of NVMe drives do. 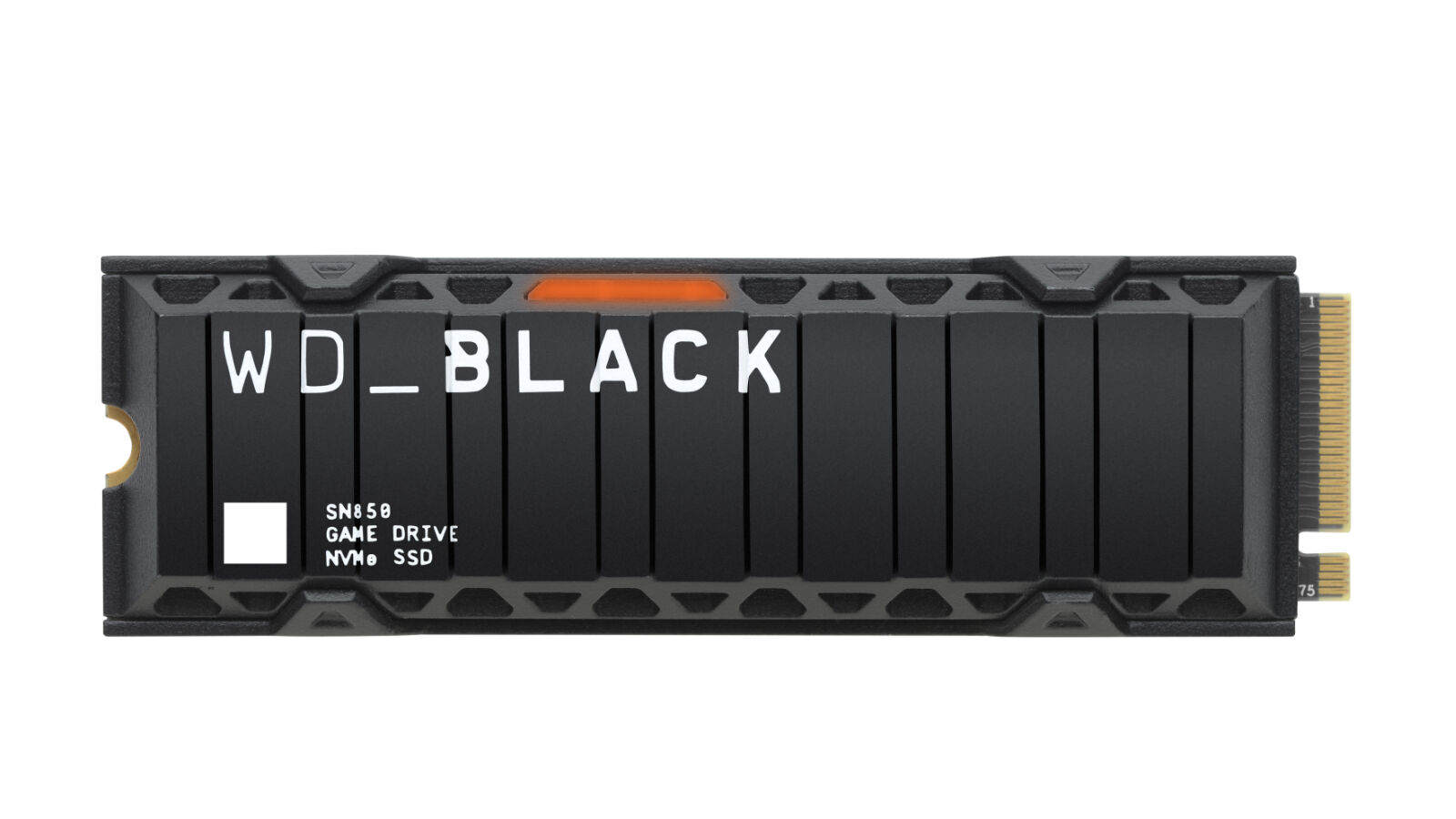 The SN850 will fit into a PCIe 3.0 M.2 NVMe slot and work, but it was built for the identically sized PCIe 4.0 slot that not every computer includes. I’ll talk about the implications of that later, but if you want to experience its full capabilities, you will need a system with the newer version of PCI Express and the additional bandwidth that interface offers.

The drive is available in two versions, a bare drive that I received from WD for review or an alternative version that has an attached heatsink.

That enhanced version not only offers superior cooling but also has some programable LED lighting on it that can be controlled by a Windows application if you run that OS.

Three capacities range from 500GB up to 2TB, and the review hardware tested here was the middle child of the family with 1TB of flash storage. 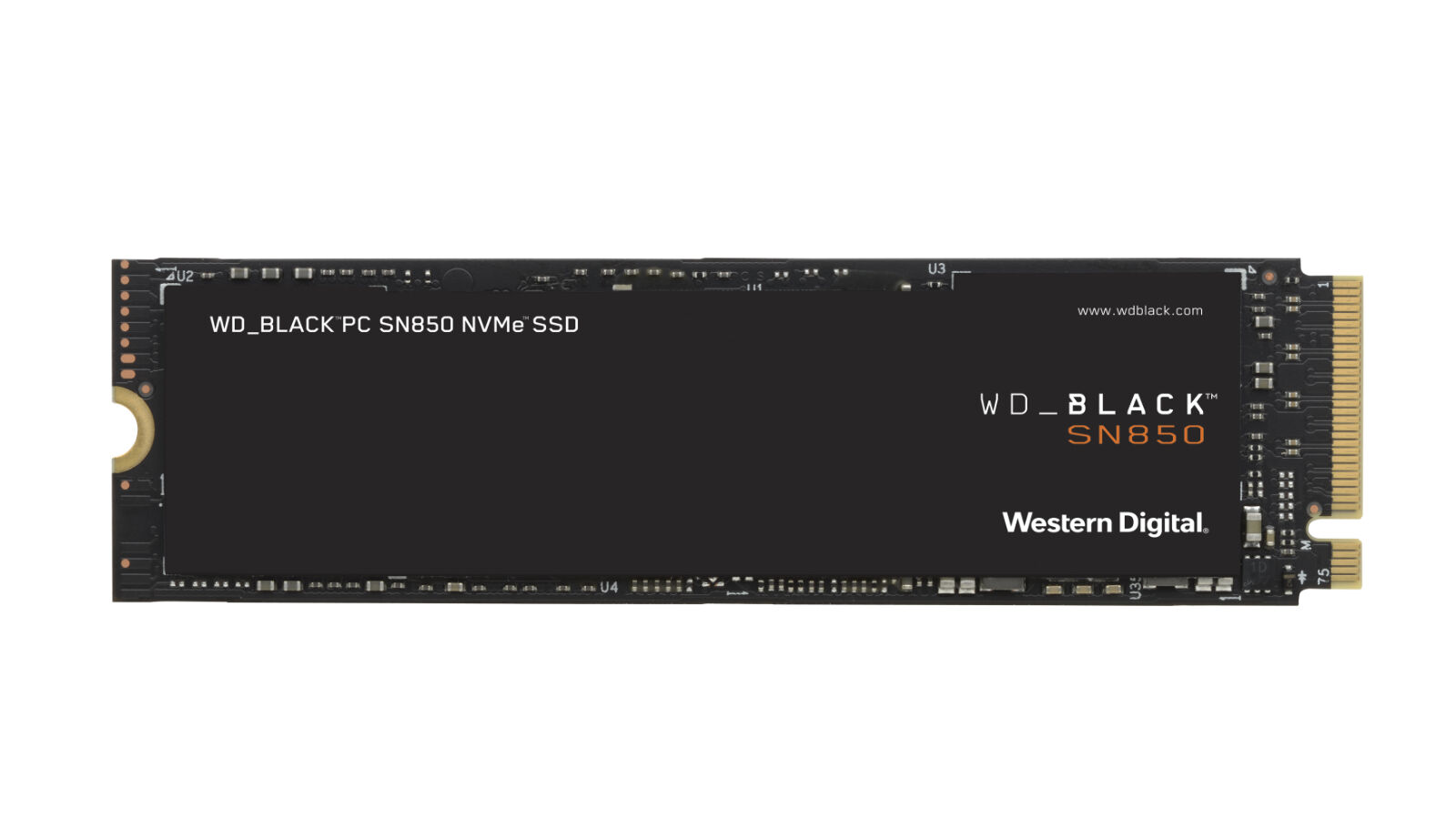 In parallel with write performance, the drives also offer various IOPS (Input/Output Operations Per Second) performance levels, with the top two capacities capable of around a million IOPS for random reads and over 700,000 IOPS for random writes.

The variance of performance by capacity is due to the amount of parallelism in each drive with the flash modules, the amount of cache and the WD_BLACK G2 controllers’ ability to manage the throughput.

Differences in TBW (total bytes written) are down to the raw capacity and the number of times each location on the drive is written to. Larger drives have each part of the flash written to fewer times for the same amount of use.

Unless you edit 4K or higher resolution video every day on the system, you are highly unlikely to hit these limits for some considerable time. Since writing the contents of a 50GB Blu-ray disc to the SN850 2TB every day would take 65 years to reach its limits.

One curiously missing feature is that this drive doesn’t support hardware encryption. Most PCIe 4.0 drives I’ve tested have this feature, but the SN850 isn’t one of them so look elsewhere if this is a must-have.

As PCI Express 4.0 isn’t a standard feature on PCs yet, I need to mention that if you don’t have this specific feature, it may be challenging to get the full performance of the SN850 or others.

Plugging these drives into a PCIe 3.0 M.2 NVMe slot will downgrade them to half the potential throughput, with the biggest reduction impacting read performance.

It is possible to use an adapter card that can take eight lanes of PCIe 3.0 and emulate four lanes of PCIe 4.0 using them, but that assumes you have the budget for these cards, and the system has unused PCIe lanes. As getting that many lanes require the X16 PCIe slots that graphics cards often use, forcing the choice to have one or the other. 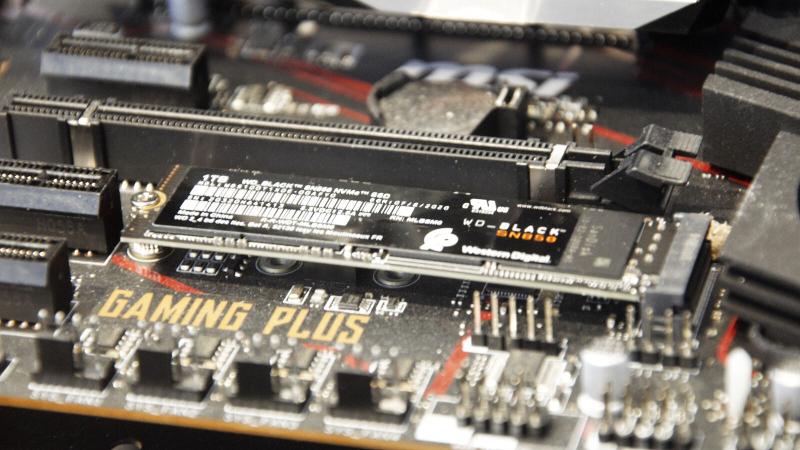 Those with an existing PCIe 3.0 system should consider a cheaper SSD than the SN850, as relatively soon systems with PCIe 5.0 or 6.0 will become available.

Alongside those solutions, new NVMe storage designs will appear to exploit the increased throughput that these interfaces will allow, even if the SN850 is likely to be supported on them.

The drive that I most wanted to compare the SN850 with was the Samsung 980 Pro since they both claim to exploit PCIe 4.0 very effectively.

I criticised the 980 Pro for not having a heatsink, and on the SN850 that doesn’t come with one, I ran into similar issues. During extended write operations, the module can get very warm, and I suspect that in some of the tests, a degree of thermal throttling kicked in on this chip.

Thinking that was a distinct possibility, I placed the SN850 in the test rig M.2 slot that sports an integrated heat distributer and that appeared to keep excess heat under control.

What’s challenging to quantify is that these numbers are heavily influenced by cache memory since Flash modules won’t operate at this performance level.

What we see in these scores, especially in respect of write operations, is the ability of the controller to ingest data before passing it on to the NAND modules at a much-reduced rate, a performance level that is only revealed when the cache is exhausted. 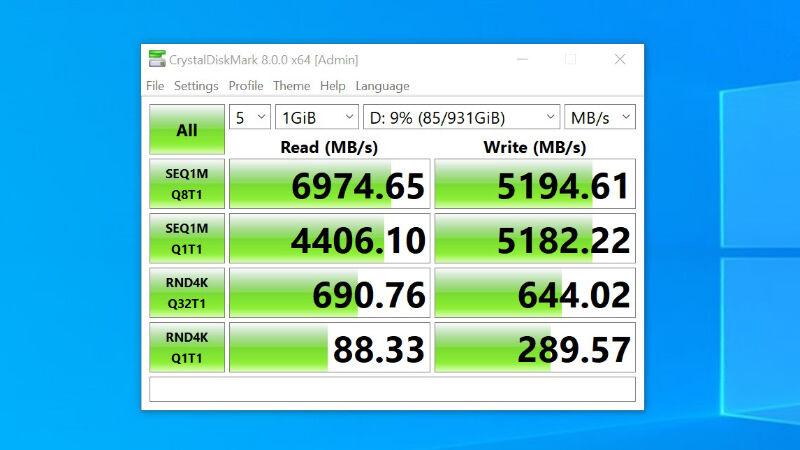 The nCache 4.0 caching strategy implemented by WD engineers favours large block writes that you might expect to see in video file editing scenarios. When handling files of varying size, performance fluctuated as the dynamic SLC cache attempt to adjust to changing requirements.

The 2TB version that I didn’t test uses 512Gb BiCS4 96L TLC flash dies, where the 1TB we tested and the 500GB option both use 256GB dies, and all use a dual-plane layout for extra throughput.

Until BiCS5 NAND appears with its quad-plane structure later in 2021, this architecture is about as good as it gets and very similar to what Samsung can achieve with its current V-NAND design.

In some tests, the WD Black SN850 outperforms the Samsung 980 Pro, and in others, the accolades went the other way. They’re both excellent drives, and most users would be happy with either.

It’s heartening to see this level of competition in the NVMe market, and I hope it continues unabated when quad-plane NAND arrives to push these devices towards the very limits of PCIe 4.0 throughput and beyond with PCIe 5.0.

You can buy it from Amazon, Ebuyer, Argos and Very.

It needs to be said, those prices for the heatsink model make zero sense. Because depending on the capacity, you can pay as little as £46.69 or US$50 for it, or as much as £77 or US$130 for the identical heatsink.

Frankly, even the lowest extra is more than the heatsink is worth, and you can find an excellent third party design from numerous sources for under £20/US$20.

The pricing of the bare drive is more competitive, with the Samsung 980 Pro 1TB being around £175 in the UK and or US$199.99. That also matches the price of the Sabrent 1TB Rocket 4 Plus.

Check out our chart of the  best SSDs to see all your options. 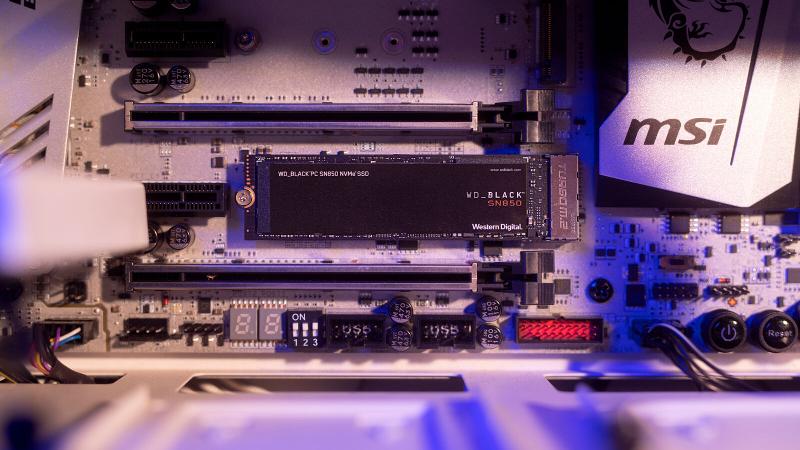 All PCIe 4.0 drives I’ve tested so far have a weakness, often overheating. But in this case, it also doesn’t have hardware encryption, and the heatsink model is outrageously overpriced.

However, there are potential performance benefits available here if you have a system that can exploit the bandwidth that this drive can handle.

However, I wouldn’t recommend torturing a Black SN850 without some additional cooling. Thankfully, many better motherboards come with cooling hardware specifically for the PCIe 4.0 capable M.2 slots, and plenty of third-party solutions exist that are cheaper than the preinstalled and LED enhanced WD solution.

The lack of hardware encryption could be a dealbreaker for some, but most users won’t miss it. What typical PC owners want is the raw performance that the SN850 can undoubtedly deliver and the competitive price it costs.