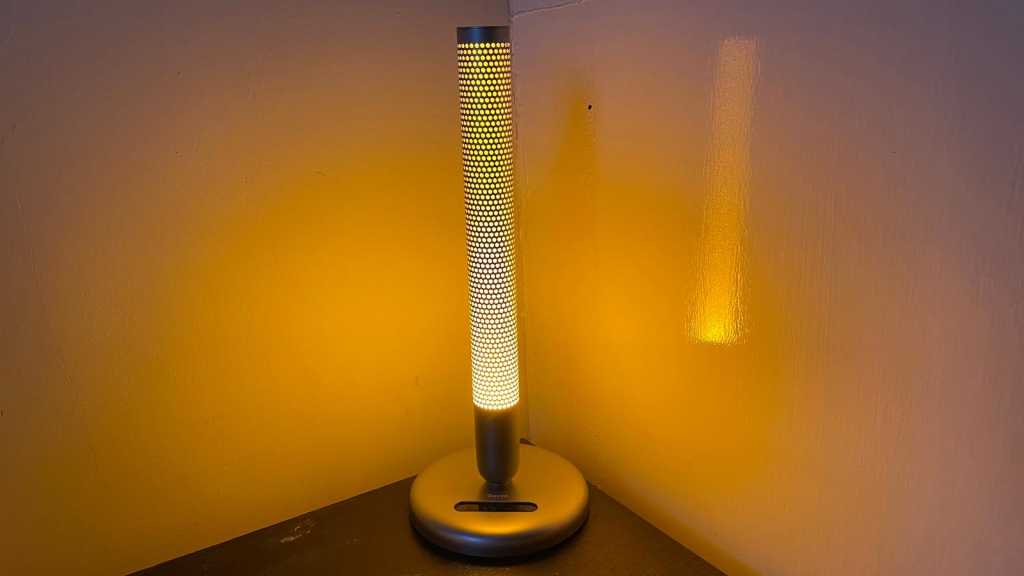 The Govee Glow may not be the brightest smart lamp around, but if it’s ambient lighting you’re after, it’s a great option with a well-built app and virtual assistant support to boot.

Govee’s collection of smart lights and home accessories is expanding with the launch of the Govee Glow, a new smart table lamp that offers something a little more ambient than most smart bulbs and strips on the market right now, and it does so without a high price tag either.

The question is, with so many smart lighting accessories available in 2021, does the Glow offer enough to tempt consumers? Depending on the kind of lighting you’re after, it could tick plenty of boxes.

The Govee Glow is certainly one of the more stylish smart lamps on the market right now. Sporting a 39cm-tall metal tube body smattered with tiny holes to let light pour through, the simplistic design of the Glow means it wouldn’t look amiss sat on your desk – which, coincidentally, is what it’s designed for.

You see, those tiny holes help let light through without being too bright or distracting, because let’s face it, we’ve all been blinded by table lamps that are a little too bright, right? The small holes create more of an atmospheric glow than a direct shine, likely how the Glow got its name. 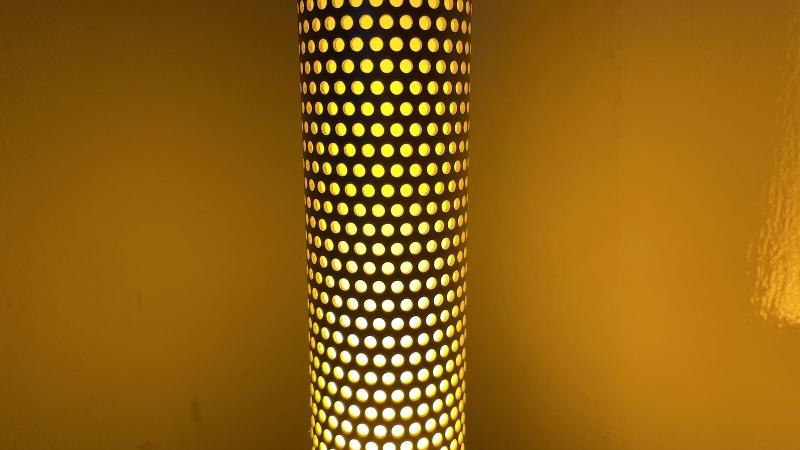 That atmospheric glow is perfect for setting the mood when watching a movie or playing a game on a Twitch stream, but it’s certainly not bright enough to light your whole room – in fact, I’d go as far as to say it’s not even bright enough to comfortably read a book at night, even at max brightness.

But you know what? That’s okay. Instead, the soft lighting the Glow provides helps create great ambience in a room, helping you settle down at the end of a long day or when you first wake up in the morning – both times of day when you really don’t want a harsh light in your face. It’s also brighter at the bottom than at the top, adding to the glowing effect the lamp produces, although I imagine some would prefer a solid light from top-to-bottom.

The Glow is sturdy when sat on a desk or bedside table, thanks mainly to its 15cm wide circular footprint, and the grippy bottom helps the lamp stay put too. But while the body is made from aluminium, the base sports a hard plastic body. It’s not that noticeable at a distance, but it’s something you’ll notice once you touch the lamp.

You might ask why you’d want to touch a smart lamp in the first place – the whole point of a smart lamp like the Glow is to control it via a smartphone or virtual assistant – but Govee knows that you can’t always be bothered to get your phone out to turn a lamp on or off, which is why you’ll also find a control panel on the base. 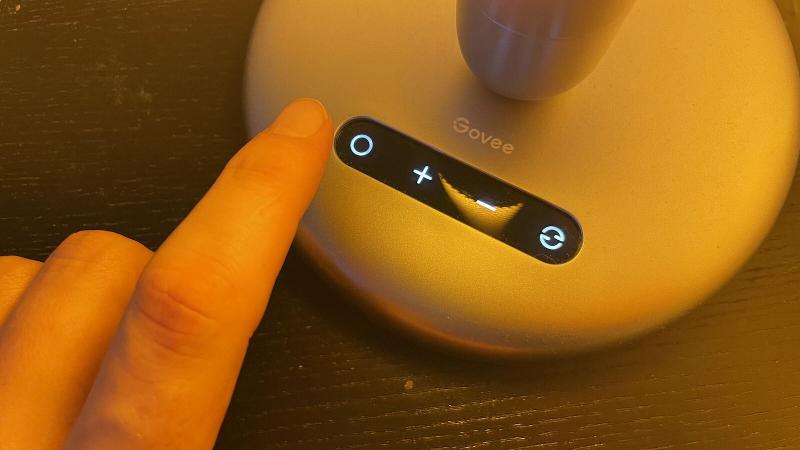 It’s a black touch-sensitive strip with LED-backlit icons. With a tap, the icons light up, with the ability to not only turn the lamp on but adjust brightness and cycle through colours too. It offers a great balance between digital and physical controls that those who aren’t quite ready to go all-in on smart accessories will appreciate.

The Govee Glow is powered by mains, connected by a 1.5m cable with an additional control unit that provides its smarts.

Of course, it’s the smart element of the Govee Glow that makes it so appealing to consumers – and Govee hasn’t skimped.

The Govee Home app for iOS and Android is the control hub not only for the Glow but any other Govee accessory. While it’s often the case of having great hardware and a frustrating app, that’s not the case with Govee Home – it’s well-built, has a great UI and provides most core features with the tap of a button. 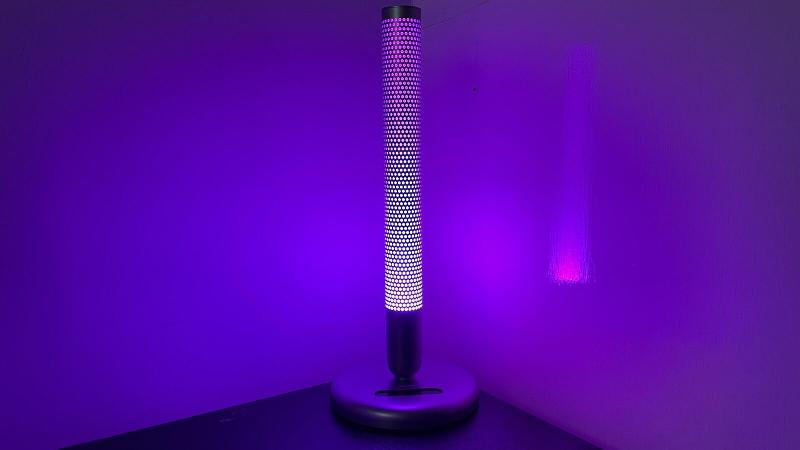 Once you’ve tapped on your lamp, you’re taken to a simplistic menu where you can select the lighting mode, with four options to choose from: Music, Colour, Scene and DIY.

Colour lets you choose a colour from a list of pre-selected colours, or you can choose your own from the built-in colour wheel, and you can save these for easy access later. With over 16m colours available according to Govee, there’s likely to be a colour for every mood. Of course, you don’t always want a bright red light, so you’ve also got a choice of standard warm white colour temperatures from 1800-3000k.

Alongside the colour menu, you have a selection of Scenes that look to emulate different effects, with options ranging from Ocean to Sunset Glow and Forest. Sadly, with the ability to only display a single colour at once – compared to light strips that can display multiple colours – it’s not quite as dramatic as it could be.

DIY provides the ability to create a specific theme or shortcut, while Music uses a built-in mic to react to sound in the environment – the latter is great for parties, but not much else. 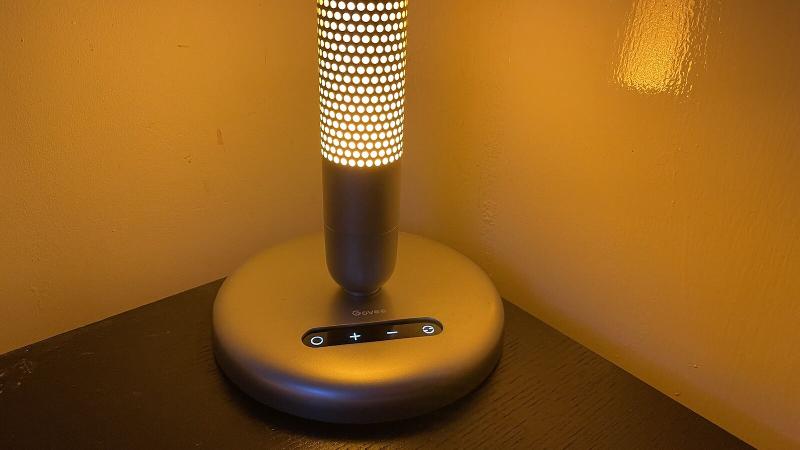 The Govee Glow connects in two ways: Bluetooth or Wi-Fi. Bluetooth will be your main port of call when you’re nearby, while Wi-Fi is primarily used to connect from farther afield, and it’s used by virtual assistants too.

It offers complete integration with both Amazon Alexa and Google Home, allowing you to turn the light on, adjust the colour and brightness via Google Assistant or Alexa, and it’s possible to link it up with other smart accessories too.

There isn’t support for Apple Home just yet, but Govee has confirmed to us that its engineers are working on it right now, and it should be rolled out by the end of the year.

Priced at $69.99 in the US, the Govee Glow offers great value for money compared to smart bulbs that require you to buy a lamp separately, and it doesn’t skimp on features or connectivity to get to that tempting price either. Just be sure that you’re happy with the ambient light it provides, as a dedicated bulb offers a brighter output than the Glow.

It’s available via Amazon in the US, with no UK availability just yet, but that could change in future. If you’re from the UK, take a look at our selection of the best smart lights for alternatives. 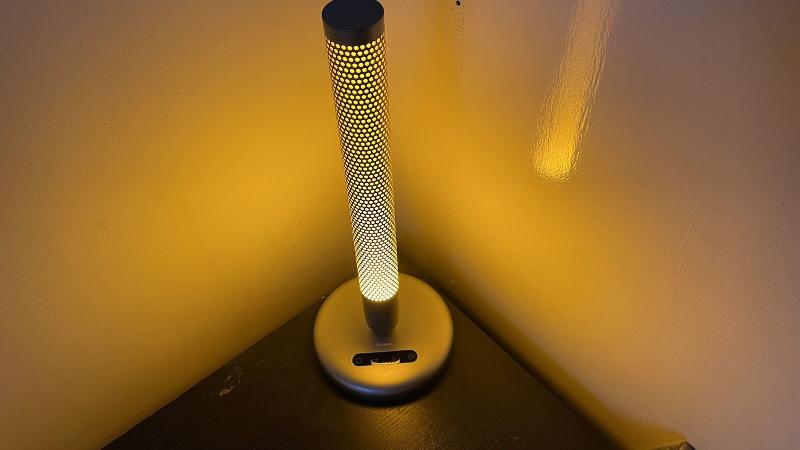 The Govee Glow smart table lamp is a great addition to any desk or bedside table in need of ambient lighting. It’s not bright enough to light an entire room (and why would you want something so bright on your desk?) but it’ll bring a soft light to its surrounding area thanks to its tube-esque design.

It looks great, its compact size means it’ll likely find a place on the smallest of surfaces and it doesn’t skimp on smarts despite the cheap price tag, with a well-built app and virtual assistant support both on offer.