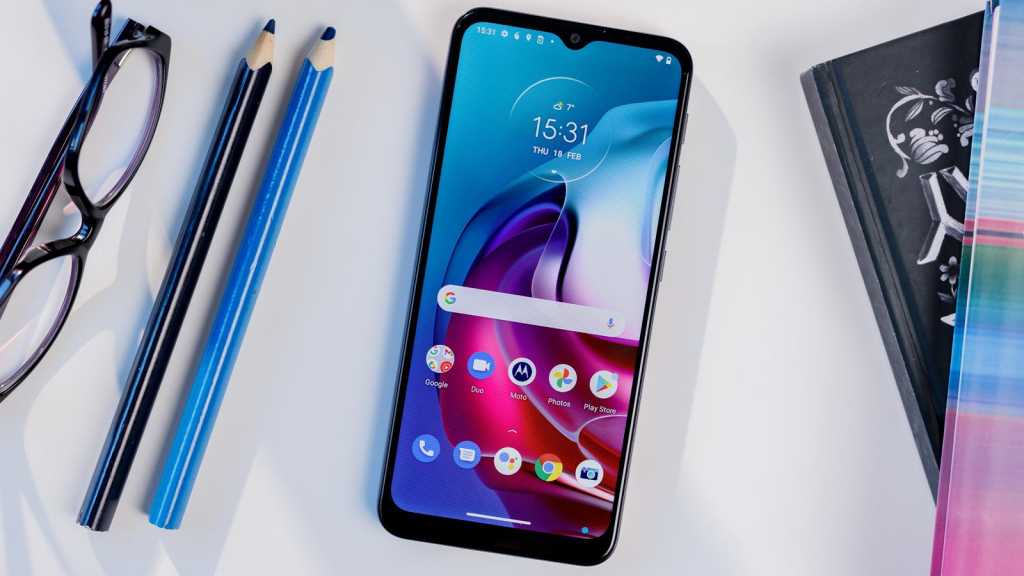 Motorola makes a predictable budget handset in the Moto G30. You get all the basics, great battery life and a 90Hz display, but underwhelming cameras may prompt eyes (and wallets) to wander elsewhere.

Reviewing the Moto G30 feels very much like Groundhog Day. If you’ve read my review of the G9 Play, you’ll know what to expect here. But feel free to stick around for my charming personality.

The G30 launched alongside the  Moto G10, marking a shift in Motorola’s naming convention where higher numbers indicate higher capability. The ultra-affordable Moto G10 didn’t really impress, so does the higher-specced G30 do better? Let’s find out.

Motorola sticks to its guns when it comes to the G30’s design. You get the same template as past G-series phones: a teardrop camera, the round fingerprint reader on the back, the Google Assistant button above the volume rocker, and a 3.5mm audio jack at the top.

In many ways, the G30 is a reskinned Moto G9 Play but with Android 11. (The similarities are especially apparent in performance, which I’ll get into later).

The only things that are markedly different on the G30 are the attractive iridescent sheen on the back and IP52 dust and water protection (the G9 series featured “water repellent” designs, instead). Otherwise, the phone looks identical to its predecessors.

Overall, the design is tried and tested. Clearly, Motorola sees little value in venturing outside a format that works. Playing it safe is risky business, however, when brands such as Xiaomi and OnePlus innovate with aggression in the budget space, cramming in ever more features for less.

But like other G Series phones, the G30 is a dependable 4G device, with Bluetooth 5.0 connectivity, NFC support, and Wi-Fi 802.11 a/b/g/n/ac connectivity. The phone also charges via USB-C.

Once again, there’s not much of an upgrade when it comes to cameras. The G30 boasts a 64Mp main sensor – like the G9 Power – and outputs to a 16Mp final resolution, with pixel binning . Shooting at the sensor’s native resolution only kicks in if you go into the camera settings and select the ‘Hi-Res’ option. You’ll also have to wait a few seconds for the image to process.

The G30 also has an 8Mp ultra-wide lens, a 2Mp macro, and 2Mp depth sensor on the back – the same as the G10. The phone can shoot video at up to 60fps, while ultrawide and macro video captures cap at 30fps.

As for the quality, images on the G30 fare better when brightly lit. In such settings, colours appear balanced and there’s a reasonable amount of detail.

The G30 really struggles in low light, however. Images appear dull, lacklustre and blurriness also becomes an issue (especially if your subject is moving). Cameras have been a recurring pain point for all the Motorola G phones I’ve reviewed. At this point, it feels as though the camera isn’t really a priority for the brand.

But to give credit where it’s due, macro shots on the G30 have improved. It was much easier to get the camera to focus on the subject too. While there is still some loss in detail and they’re not the most vivid, I was pleased with the final shots (for a Moto G phone, at least).

The selfie-cam relies on a 13Mp sensor, which is stronger than the G10’s 8Mp, but once again, you’ll have to be in a brightly lit space to make the most of it. In low light, images suffer from grain, dullness, and general blurriness. You probably don’t want the G30 if you’re after that perfect shot for Instagram.

This might have been impressive a year or two ago, but with the budget Xiaomi Poco X3 NFC – currently the king of budget phones – packing a 120Hz display for just £40 more, it leaves room to question whether Motorola is truly attempting to be competitive.

The screen itself is bright and reached a maximum of 366nits in my test. Colours also look vibrant, which makes the phone suitable for social media browsing and casual gaming.

While HD videos or films don’t have the richness of detail you’d expect if you’re used to higher resolution screens, the viewing experience isn’t bad. The G30 will do just fine if you’re after general browsing and streaming on your phone.

Like past G Series phones I’ve reviewed, the battery is the G30’s undeniable strength. In the PC Mark for Android battery tests, the G30 managed a decent 11 hours and 40 minutes.

You can expect similar performance in the real world too. I managed to get away without charging for two days. The G30 ships with a 20W charger, though the phone itself charges at 15W. This isn’t as fast as other budget phones on the market, such as the £279 Realme 8 Pro, which offers 50W fast charging, but bursts of charging through the day gave the G30 the boost it needed to keep me going for hours.

In my test, the G30 gained up to 32% back in half an hour, but even a 5-10% boost goes a long way. I could squeeze up to seven hours with 13% remaining while in the battery-saving mode, a feature I loved.

Unlike other phones that simply strip functionality to calls and texts, the battery-saving mode on the G30 still allowed access to the camera, apps and social media, while preserving power in the background.

The G30 relies on a Snapdragon 662, which makes it faster than the Moto G10, which runs on the Snapdragon 460. The Snapdragon 662 is the same gear as last year’s G9 Play and G9 Power, so the overall benchmark results are similar.

You can see in our benchmarks that the G30’s performance is on par with the G9 Play, and last year’s G9 Power actually outdoes the G30 in the multi-core performance score.

While the overall performance on the G30 is mostly smooth, our Geekbench scores revealed it is on the slower end, compared to other budget handsets that are only marginally more expensive, such as the aforementioned Poco X3 NFC and Realme phones, which all scored in excess of 1700. In my use, there were moments when I found the handset lagging when switching between apps.

Like its G9 siblings, the G30 fared better in the gaming tests. Its scores weren’t far behind the Poco X3 or Realme phones, so my recommendation remains the same: while the G30 is not specifically a gaming phone, it will serve you fine for casual gaming and social media browsing, particularly because of its large battery.

If you want a gaming phone, see the best ones on the market here.

The G30 operates on Android 11, and like other G series phones, the experience is clean and as close to a pure Android as you can get without buying a Pixel phone. Gestural navigation makes the phone easier to use in one hand. Motorola also keeps the features I’ve come to love on the G series phones, such as the three-finger screenshot and karate-chop motion to turn on the flashlight.

Less impressively, I found the G30 made a few unprompted reboots. This is partly a design issue and a UX issue. The G30’s power button also launches the Google Pay screen, which hosts the emergency and power/restart options. It’s likely I inadvertently tapped restart while handling the phone, but given the number of times this happened, there’s clearly something that isn’t working with the layout or sensitivity of the button.

The Moto G30 is available to buy in the UK, US and Europe for £159.99/US$239.99/179 €. You can pick it up from Motorola, Lenovo (Motorola’s parent company) or Amazon. It’s available in Smoke Black, Dark Pearl or Pastel Sky, though Motorola only stocks the latter two colours.

While the handset is affordable, you can find better value elsewhere. You might have to pay a bit more, but that upfront investment will go a long way if you’re not planning to upgrade frequently.

We’ve ranked the best budget phones in the market here.

Motorola churns out another run-of-the-mill budget G-series phone with the Moto G30. While it’s affordable, it doesn’t pass muster if you’re after value. Fierce competition in the budget space from brands like Oppo, Xiaomi and OnePlus mean you can get a lot more bang for your buck, if you don’t mind spending a few pounds more to begin with.

The G30 isn’t a total lost cause though. I would recommend the handset to parents looking to give their child their first phone – given the handset ticks off all the basics while squeezing in a 90Hz display and superb battery life.

The low price makes it less precious were your child to lose or break the thing, and the underwhelming camera might actually discourage your tween from posting photos to social media if online privacy is your concern. How’s that for a silver lining?