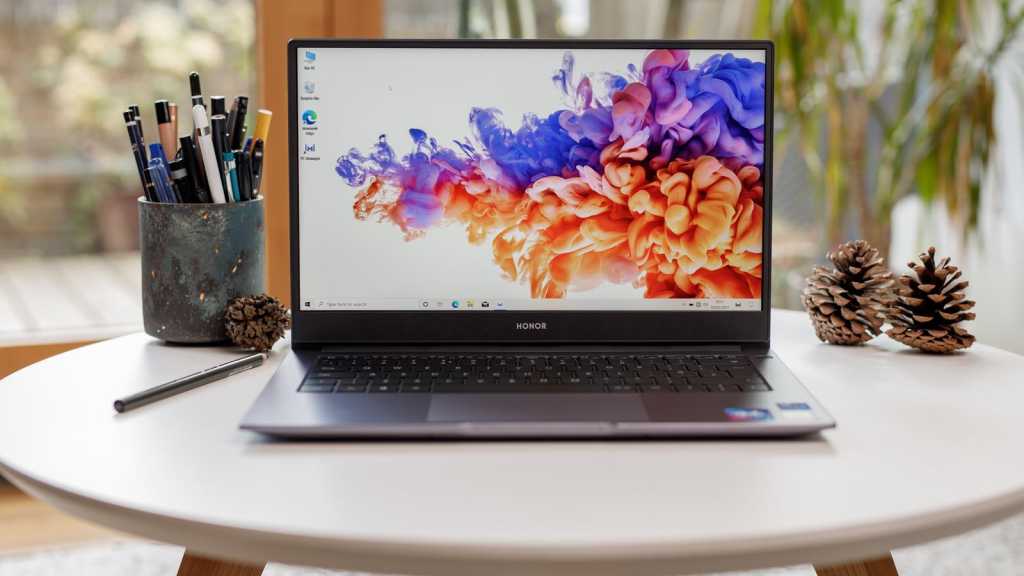 Putting new Intel chips inside the same laptop with a sizeable price hike makes for a hard sell, when the MagicBook 14 had previously nailed the mid-range value option.

The Honor MagicBook 14 has been one of the best-value laptops you could buy for the past couple of years, offering a brilliant all-round package of design, specs, performance and features. Its new model for 2021 makes the switch from AMD to Intel chips, and becomes a lot more expensive in the process.

Models vary by region but there are those with the Core i5 and Core i7. I’ve tested the latter which features the same CPU found in the Huawei MateBook X Pro (2021).

While the MagicBook was previously a mid-range laptop, the new top-end specs, and the accompanying price, mean it now has some stiff competition.

It’s also not a surprise because this is a good looking laptop, although I wouldn’t be complaining if Honor had managed to trim a little off here and there. Still, at 15.9mm and 1.38kg, it’s perfectly portable.

The aluminium chassis is robust and provides a high-end look and feel. I particularly like the bevelled edge around the lid that’s coloured blue to match the logo, which stands out as the light catches it. It comes in Space Grey and Mystic Silver.

It’s certainly more attractive than many mid-range laptops we’ve tested, with the plastic bezel around the screen the only real element that sets the MagicBook 14 apart from flagship models. That bezel is very thin (4.8mm) around three sides which results in a screen-to-body ratio of 84%.

One could argue that the part of the bezel at the top is too thin as, like all Honor and Huawei laptops, there’s no room there for a webcam. Instead, that lives in a pop-up key in the keyboard. It’s a neat solution for privacy but if you make lot of video calls then the angle is very awkward and unflattering.

There’s no SD card slot but the MagicBook 14 has a reasonable range of ports including HDMI, two full-size USB-A ports, a headphone jack and USB-C. The latter is used for charging but doesn’t support Thunderbolt.

It’s also worth noting that one of the USB-A ports (the one on the right side) is the old 2.0 version. That’s fine for a mouse, but the 3.2 Gen 1 USB-A port on the other side is around seven times faster for file transfers: it took just 20 seconds to move a 6GB folder from an external SSD compared to over two and a half minutes with the USB 2.0 port.

Honor doesn’t state the speed of the USB-C port, but you’ll want to use it primarily for power as it could only manage USB 2.0 speeds in my tests.

This is an area where laptop makers often save a bit of cash but the keyboard and trackpad on the MagicBook 14 are suitably decent.

Typing is a pleasant experience with the keys offering a speedy and responsive action. The keyboard is also backlit and offers two levels of brightness, plus a top row of ‘F’ and function keys making it quick to access various controls.

It’s not flawless as, like most laptops, has tiny half-size up and down arrow keys, unlike the layout on a full-size desktop keyboard. That’s about my only complaint, though.

The trackpad might not be made of glass but it’s a decent size and perfectly responsive to touch, gestures and clicks. I didn’t have the same issue with friction as my colleague Dom on the previous model so either Honor has tweaked it or it’s just down to personal preference.

Like the Huawei MateBook 14, there’s a power button with an embedded fingerprint scanner. It works well and provides a quick and easy way to log in as we’re all so accustomed to on smartphones.

As mentioned earlier, the laptop has a plastic bezel around the display (Huawei’s MateBook versions have a glass front) but that doesn’t mean the screen quality is poor. In fact, this is a decent screen and is a classic area where you tend to see corners cut when not spending the big bucks.

As the name suggests, this is a 14in screen and offers a Full HD resolution (there’s also a MagicBook 15 if you want a larger display). It might look the same as its predecessor but offers better performance with better brightness and colour reproduction, according to Honor.

This checked out in testing. The trusty SpyderX colorimeter showed the screen can reach 354 nits, 99% of sRGB and 75% of both Adobe RGB and P3. The previous model topped out at just 220 nits and a mediocre 63% sRGB and 47% for Adobe/P3.

That all makes for a noticeable improvement and the lack of a glass front (as seen on the MateBook) means fewer reflections. Indeed, the matte finish combined with the good brightness levels means it’s suitable for use in a range of situations.

However, only one model in the range has this display: the one with 16GB of RAM and 512GB of storage. The others have a lower-grade display of unspecified quality.

If it’s of any use to you, the hinge allows the screen to fold flat against your desk. More important to note is that Honor doesn’t offer any touchscreen options in the range.

Like most laptops, the stereo speakers are underneath but unlike most of those, these sound very good. There’s a nice balance of tones and even a slight warmth of bass. They even sound good without having to pump the volume, with 60% plenty enough to make music loud, avoiding distortion.

Honor says the speakers offer virtual surround sound but I didn’t find they provided such an experience.

One of the major changes to the MagicBook 14 (and 15) this year is the switch to Intel chips. It’s interesting considering Huawei moved to AMD for the MateBook last year and the Ryzen processors have been excellent choices.

Nevertheless, Honor has gone with Intel’s latest 11th-gen Tiger Lake silicon here (just like like many rivals) and there’s a simple choice of a Core i5-1135G7 or a Core i7-1165G7.

I’ve tested the latter, which had four cores and eight threads with a Turbo Max speed of 4.7GHz. Honor hasn’t skimped elsewhere as the MagicBook 14 has up to 16GB of dual-channel RAM and a 512GB SSD.

This particular configuration, then, really isn’t a mid-range laptop anymore and matches the core specs of the flagship Huawei MateBook X Pro (2021).

Performance is great, tackling demanding tasks with ease, despite not having a separate GPU. Still, the integrated Intel Iris Xe Graphics is powerful enough to handle photo editing and some gaming as long as you don’t expect too much: this isn’t a gaming laptop.

It put into question whether the price hike is worth it.

The MagicBook 14 has a dual heat pipe and 38% better air intake compared to the previous generation. I found the ‘Supersized’ fan kicked in for demanding tasks and sometimes when charging but it’s a fairly quiet fan.

In terms of wireless, you get the latest standards in Bluetooth 5.1 and Wi-Fi 6 with 2X2 MIMO Dual Antenna.

There’s no improvement in battery life compared to the previous MagicBook 14 we tested. When playing a looped HD video with the brightness set at 120 nits – a result of 11 hours and 35 minutes is still solid, if unremarkable these days.

The late 2020 MagicBook 14 lasted over 13 hours so things have gone slightly backwards. Note that if you’re thinking about the MagicBook 15, this has a smaller battery at 42Wh compared to 56Wh and Honor claims it lasts for only 7.6 hours.

Charging remains speedy at 65W and there’s no in-line power brick, so the charger is more like a smartphone’s with a USB-C to USB-C cable. This makes it easier to carry around and can be used for other devices, too. Just note that the brick is a little wide so may impede adjacent sockets when plugged in.

Charging the MagicBook 14 from completely empty in our usual 30-minute test saw it reach 39%. That’s 5% off what Honor says and what we found on the previous model, but still a decent speed.

Windows 10 Home comes as standard here but Honor adds a couple of useful features on the software front starting with a PC Manger for controlling things like the power plan and drivers. This is also a pop-out bar with other handy bits like notifications, documents, clipboard and basic apps.

The main thing you’ll want to use is the Honor Magiclink which allows you to pair a smartphone with the laptop via an NFC chip – the sticker in the corner. Once connected you can transfer files easily, take calls on the MagicBook, create an instant hotspot and use the phone’s interface on the laptop.

The caveat is that you need an Honor or  Huawei phone running EMUI 9.0 or Magic UI 2.0 or later for compatibility.

I didn’t have a compatible phone to test this out but it’s effectively the same as Huawei Share on the MateBook 14 which I did find useful when reviewing that.

Even if you don’t have a compatible phone, you can use the My Phone app to connect any Android phone and get a similar experience.

At the time of writing, I’m still waiting for final confirmation of which models will be on sale in the UK and other markets. Things are relatively simple though, it seems, with a choice of Core i5/i7, either 8- or 16GB of RAM and either 256- or 512GB of storage.

With the previous MagicBook 14 models priced at £549 then £669, Honor has not taken long to move out of that affordable mid-range price bracket and into the more premium space.

This means it has a different set of rivals including the Dell XPS 13, HP Envy 13, Microsoft Surface Laptop 3 to name but three.

See other rivals in our best laptop chart.

While the upgrades are welcome, it might not have been the best decision for Honor to move into the premium end of the laptop market.

The MagicBook 14 was one of the best – if not the best – value-for-money laptops you could buy, but now it competes with flagship models from the top names.

Don’t get me wrong, performance of the top-of-the-range model I tested is excellent and the display is a big improvement on the previous generation. And it still comes in a stylish and well-made chassis. But you’d expect these things given the corresponding increase in price.

However, the Core i5 model doesn’t get that improved display and even the Core i7 isn’t a big improvement compared to the Ryzen 5 in the last model and battery life has gone backwards.

At this price, things that were previously acceptable due to the much lower price are now more obviously downsides when compared to rivals.

The webcam – now a more important part of a laptop than ever – is awkwardly positioned and there’s only one fast USB port, which isn’t even the USB-C one. There’s no SD card reader and there are other signs of its mid-range past such as a plastic screen bezel and trackpad.

This is still a good laptop, but you should consider its rivals as well as the older AMD-powered models which you may well find at more tempting prices.